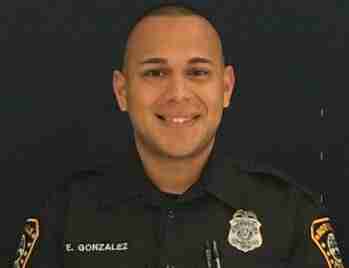 Edgar Gonzalez at his swearing in ceremony in 2016. (Norwalk Police)

NORWALK, Conn. — A former Norwalk Police officer was arrested Monday and charged with forgery and computer crime after allegedly filing false reports while serving as a Norwalk officer.

Edgar Gonzalez, 31, of Stamford surrendered himself at Norwalk Police Headquarters on a warrant obtained after Norwalk Detectives conducted an investigation, an NPD news release said. He had resigned his position in June after serving for five years in the Patrol Division due to the NPD suspicions. He was charged with five counts of computer crime 3 and five counts of forgery. Bond was $100,000 and his court date is Feb. 18.

“In April of 2021, the Norwalk Police Administration received a complaint from a motorist who was notified of having been being involved in a traffic stop, which, according to the complainant, had never occurred,” the news release said. This triggered an internal review which showed “that there were numerous records of car stops reported in Norwalk Police computerized records by then Officer Gonzalez where out-of-state motorists had been cited as having received written warnings for minor motor vehicle violations.”

Police contacted some of the operators, “who also alleged that the stops had not occurred. This prompted a records audit, which determined that Officer Gonzalez had entered false information on numerous occasions over the course of several months,” the release said.

“I am very disappointed in the actions of Mr. Gonzalez, and am thankful that the initial incident was brought to our attention,” Norwalk Police Chief Thomas Kulhawik said in the release. “This allowed us to then fully investigate the complaint and assure that in addition to the criminal investigation, the records were corrected. Conduct such as this will not be tolerated and we will hold our officers accountable for their actions.”

Although the police department is authorized for 181 officers it was down to 166 sworn officers in November. As of early February, Kulhawik said it’s down “17 or 18” positions, “plus people that are out on long term disability.”

In November, Lt. David O’Connor, police union president, said the department lost 12 officers in 2021, four of them due to disciplinary issues. Two departures were due to criminal accusations, as Officers Michael DiMeglio and Sarah Laudano resigned due to their arrests on charges of second degree larceny and reckless endangerment.

Gonzalez was arrested in December 2019 and charged with reckless endangerment after two guns were stolen from his convertible, parked in Stamford, according to the Stamford Advocate.

NancyOnNorwalk could not find a record of his arrest on the State judicial website Monday.

“He was not disciplined departmentally as the case was in Stamford where his personal guns were stolen from his car which was parked,” Kulhawik wrote Wednesday.

Officer Hector Delgado was suspended for five days after resisting arrest by a State Trooper on a drunk driving charge after he struck an 18-wheeler on Interstate 95 in 2019, according to The Hour. Delgado reportedly had a history of suspensions.

On Wednesday, Kulhawik said he doesn’t know why Gonzalez falsified records. The department doesn’t have quotas and “We ask for officers, especially traffic unit officers, to be proactive. He was very proactive but unfortunately he padded his stats.”

Finally some consequences and transparency! And those he victimized speak to the judge about how his actions effected them, the domino affects too!
Still, sincerely hope he has support & doesn’t off himself. I implore those close to the former cop, be present in this time, sometimes the shame & dishonor are hard to face. The financial challenges he might be under, even denial might be something he is struggling with.
Recently cops spoke in Hartford about the toll of what their exposed to puts in them, how it impacts their mental health & how more support is needed… that it’s so vital.

A $100,000 bond for “padding his stats”? Compare the amount of that bond to the amount set for some real crooks. What he did certainly wasn’t right but comparatively speaking a $100k bond seems a bit excessive.

Good luck matching salary, benefits and pension in the private sector.
Edward has made some very poor decisions.’

Glad he was caught.

Now, let’s talk about why he probably did it… Norwalk isn’t exactly the worst in this regard, but it’s no secret that municipalities everywhere depend on traffic citation revenue. Does Norwalk have quotas? Informal pressures? “Expectations”?

And are there any parts of the city that would be better served by improved traffic design (reducing design speeds to meet actual speed limits, etc) rather than wasting resources on enforcement? At $100-300k/officer/year, certainly that buys some lane narrowings, crosswalks, and tighter curbs, right?

Didn’t he get his guns stolen?

If you actually read the article, it said these were written warnings that were issued. These carry no fines. He would have been stupid to issue a warning for defective equipment because this may have somehow triggered the other state finding out. The only reason I could think of that we would do it was to make himself appear more proactive than he was, whereas possibly better assignments within the department could be tied to performance and being a “go getter’. This is of course, merely speculation.

Neighbor – you are right. In 2019 two high powered guns were stolen from his car – he received no punishment from the department for that incident.