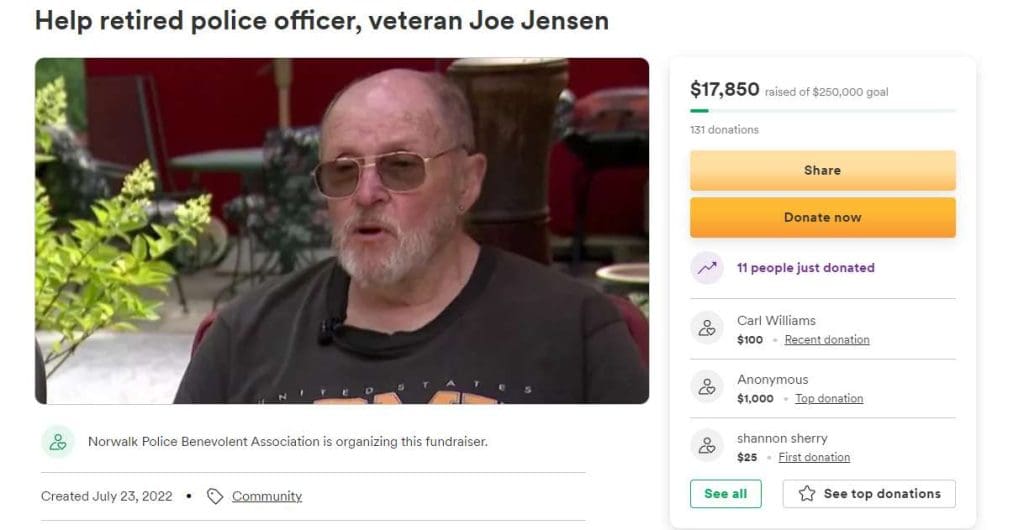 Screengrab of a GoFundMe page.

Retired Norwalk Police Officer and United States Army veteran Joe Jensen is hurting due to the alleged actions of his attorney, and a GoFundMe campaign seeks to help.

Jensen was represented by Attorney Carl Ferraro in the sale of the home he raised his children in and live with his late wife, who died of cancer. Ferraro “stole just under one million dollars from him,” the GoFundMe page, organized by the Norwalk Police Benevolent Association, states.

Ferraro, 57, of Darien was arrested July 6 and charged with eight counts of larceny first degree after complaints poured in that he had withheld money from clients during real estate closings, according to the Norwalk Police Department.  Bond was $4,325,000.

Jensen’s expected proceeds from the home sale were more than $850,000, according to Court documents filed in a civil lawsuit against Ferraro.

Jensen and other victims may be able to get compensation from the State’s Client Security Fund, but this will reportedly take more than a year.

The Sixth Taxing District recently publicized the GoFundMe page. As of Tuesday morning, $17,850 has been raised. The Norwalk Police Benevolent Association set a goal of $250,000.

Jensen “served the Norwalk community for over 27 years,” the GoFundMe page states. “During his time as Community Police Officer for Rowayton, he solidified his legacy as a thoughtful, kind and caring person who was always there to assist and keep his community safe.”

It states, “We now have the opportunity to help a man that has given a lifetime of service to his country and community. Please consider donating to Joe and his family, who are going through a rough time financially.”

“Summer Meet and Mingle” at Ripka’s Beach Café, Calf Pasture Beach in Norwalk, is planned for 6 p.m. Thursday Aug. 25, according to a news release from event sponsor Norwalk League of Women Voters (LWV).  A light menu is promised, and you can view a depiction of the LWV’s history in our town. Suggested donation is $10, and men are welcome.  The League describes itself as “a 100-year-old non-partisan organization that helped women get the vote.”

Volunteers who live or work in the Norwalk area are needed to join the 200 members of Norwalk Health Department’s Emergency Response Team, according to a news release.  A medical background isn’t necessary.   You’ll be trained to assist with health programs and events, and you’ll help public health officials disseminate preparedness messages.