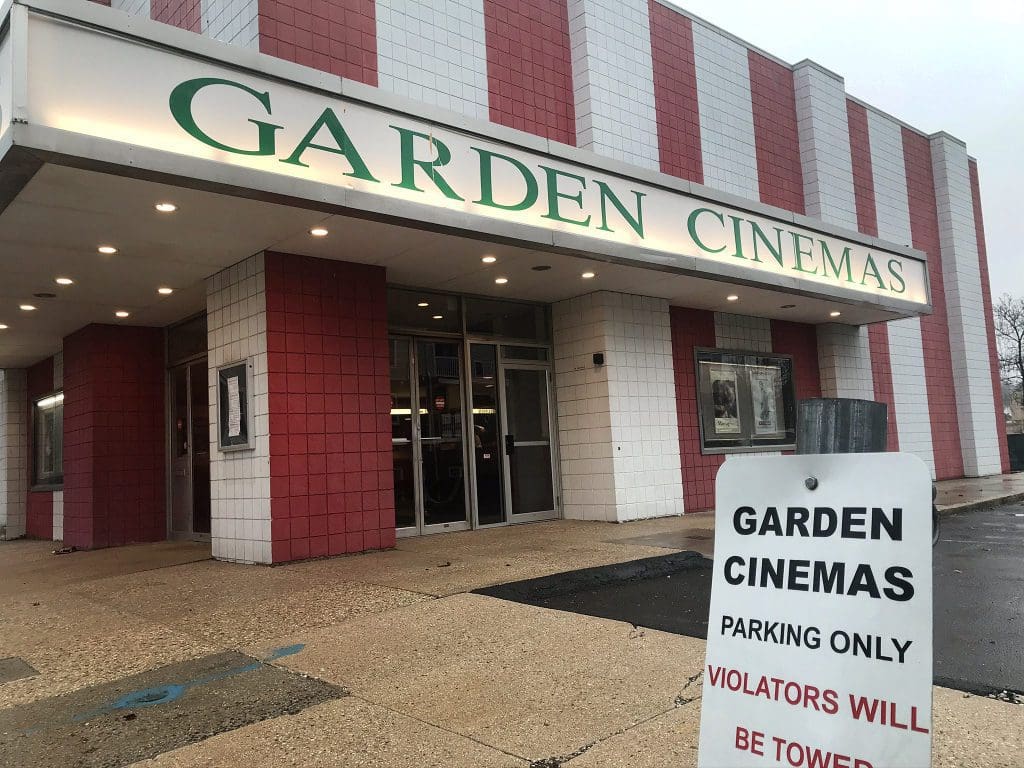 Richard Freedman, owner of the Garden Cinemas, said “business has collapsed” and he’s closing the theater.

NORWALK. Conn. – Thursday will mark the last picture show for The Garden Cinemas, which will close after a final screening of Two Popes and Marriage Story, ending a 25-year run and dashing the hopes of cinephiles who signed petitions by the hundreds to save it.
In an email to NoN, Richard Freedman, owner of the Isaac Street theater, thanked his patrons and blamed empty seats – economics, pure and simple – for the venerable theater’s demise.

For two years, Freeman subsidized the Garden; all the while, he said, business declined. Last March, with attendance down by half, he said he would sell the property no matter what.

“No matter what,” in this instance, undoubtedly refers to the outlook for Wall Street Place, aka POKO, the on-again, off-again mixed-use development languishing across Isaac Street.

While Freedman said the closing has nothing to do with POKO, he noted his business began to go down five years ago, just about the time POKO began to go up. He also pointed out that the Garden’s sister theater, the Avon in Stamford, is flourishing, screening the very same films. Freedman closed his other Stamford arthouse, the State Cinema, in 2018.

By virtue of its location, the Garden’s fortunes have long been tied to those of Wall Street Place, conceived in 2004, approved in 2008, begun in 2015, and bankrupt in 2016. Construction stopped due to a $9 million shortfall and the subsequent death of the developer, Ken Olson of POKO Partners.

Owner Citibank, in conjunction with its preferred redeveloper, JHM Group, revealed a plan in July to demolish the cinemas to make way for a parking garage to replace spaces horse-traded by the original developer to an adjacent property. That property is the Isaac Street lot now owned by real estate broker Jason Milligan, whose clashes with local officials are legion. The city is challenging the legality of his purchase in court.

Without additional parking it will be impossible to restart the construction of Wall Street Place. Developer JHM made an offer to Freedman for his property. Freedman accepted, prompting citizens to circulate a petition that drew 14,000 signatures in support of a sequel: a nonprofit New Garden Cinema/Norwalk Film Center in keeping with the Wall Street gestalt as Norwalk’s arts district and cultural heart.

As yet, the plan to build a garage on the site of the cinemas is still in the planning stages. The Common Council tabled a vote in late July, and Mayor Harry Rilling announced that it would be taken up again in September. “Wall Street Place discussions are ongoing,” he wrote Monday. “However, I’m not pleased with the lack of progress at this juncture.”

Milligan deflects critics who blame his purchase of the former Leonard Street lot as the impetus for replacing Garden Cinemas with a parking garage. And he counts himself among the many who are hoping The Garden Cinemas can reopen, “under new management, new energy, and new circumstances.”

No parking – No customers. No one was ever going to park in the Yankee Doodle garage and walk to the movies. You do not need a city planning degree or a $50,000 city study to figure this out. These huge apartments have ruined Norwalk.

Big loss for Norwalk and Wall Street. What a mess.

What a shame! It will be missed! Can they open in SONO mall? Wouldn’t that be great!

Avon has prime location, beautiful exterior and a huge population within walking distance. Garden has none of it. I’m surprised the cinema has lasted this long. People shouldn’t be too sad. Avon isn’t far at all, very convenient for Norwalk residents to get there. Few minutes walk from the train station or a 10-15 minute drive. Plenty of parking near it as well.

Will be very missed

A pox on all parties -P&Z, Finance, Legal, Mayors Office, Citi Bank, Milligan and any one else involved.

Back in October 2017 at the initial POCD stakeholder session, city stakeholders overwhelmingly voted against multi story mixed use building in the Wall Street area.

This theme was repeated at most of the neighborhood Stantec sessions over the next year!

Did the city’s legal or finance departments listen? apparently NO

Did the local developers listen? apparently NO

Did P&Z listen ? apparently NO

All fingers point to a questionable set of decisions made years ago, with little (if any) attempt to correct.

I would like to know if the city did anything to help the Garden Cinema financially, tax deferral, tax abatement or any other form that a developer pleading poverty would enjoy.

After all, the city sanctioned the dismal parking issue in the area by approving POKO!

“Up Town” Norwalk was ignored for decades in favor of SONO and instead of putting forward a plan which would have revitalized the area while preserving the character of the existing historic buildings, we get the “Tyvec Temple” monstrosity. What an eyesore and what a disgrace.

The financial, legal and throwing of sand among factions on those few blocks is so convoluted and troublesome on many fronts, I won’t go further there. Where I will go is if parking is truly THE issue, it’s a pathetic state of society whereby patrons/the public apparently won’t walk 830 feet from the parking garage to Garden Cinema (see my Google map attached). Although I am not a movie guy, I stopped going to that section of Norwalk a while before moving to Wilton, but as a former Norwalk Bike Walk Task Force volunteer, it’s a sad state of affairs for this section of Norwalk whereby every element of infrastructure is there yet apparently none of it gets used for walking to Garden Cinemas from that parking garage 830 feet away – sidewalks, signage, lighting, all of which would theoretically make walking very conducive.
content/uploads/2020/01/ObesityandParking.pdf

It is very sad if you believe that. If anything the work I have done to reopen the parking lot hastened the Gardens closing.

Richard Freedman is a good man and is not willing to disparage the city leadership.

There is no doubt that the bureaucrat building project across the street crushed him and the city leadership abandoned him.

Closing my lot forced the city to reopen 2 way travel on Isaacs Street. It remained closed for a few weeks but only on 1 side. The other side remained open and the public has continued to park in my lot through out.

Take a drive or stroll through there. Besides POKO the rest of the area is buzzing with activity and art.

This is very sad but understandable. I recall that the GC owner noted in an earlier NoN article a significant drop in audience numbers when the POKO project was started. That is understandable given the noise and disruption a large construction project entails. But now that the project has sat there for 3+ years with no movement casts a long shadow over any entertainment venue in proximity.

I wish the City had acted quickly and forced Citibank to sell at market rates/terms. This could have been done in 2017, in which case we could have had a market rate development nearing completion by now. What a boon to the Wall Street area, and all of Norwalk, that would have been. Would have saved us a lot in legal fees as well.

I still pray the City comes to its senses and does what should have been done in 2017.

Unquestionably, poko is a beg mess and contributed greatly to this problem but the pile on starts to feel like crocodile tears. If the 14000 who signed the petition cared enough they would’ve bought a $50 or $100 subscription to garden cinemas and I have no doubt the theatre would’ve stayed in business. It’s easy to sign a petition and then harangue politicians.
a few bucks from 14000 people would’ve made all the difference

@ Milligan it’s sad if you believe your antics have not been disruptive to residents trying to get around and small business in the area. I heard sales tanked when the barriers went up. Not sure how anyone would believe the blocks weren’t deterrents to the theater.