The Research Brief is a short take about interesting academic work.

Human activities, such as burning fossil fuels for transportation and electricity, have worsened the intensity of extreme rainfall and snowfall over land in recent decades, not just in a few areas but on a global scale, new research shows.

Past studies were able to attribute individual extreme events and long-term changes in some regions to climate change, but global assessments have been more difficult. We used a new technique to analyze precipitation records from around the world and found conclusive evidence of human influence on extreme precipitation in every one.

Scientists have been warning that rising global temperatures will lead to more extreme precipitation in the future, mainly because warm air “holds” more water vapor in the atmosphere, fueling storms.

With Earth already about 1 degree Celsius (1.8 F) warmer since the start of the industrial era, we wanted to find out if that change had already started.

Past attempts to detect the human influence in historical precipitation records typically required long time series with many consecutive years of data. But precipitation is difficult to monitor over long periods from land or space, so those records are rare. We found another way.

We used artificial neural networks, a type of machine learning, to find patterns of extreme precipitation in weather records. Once those neural networks understood what to look for, we could analyze shorter and more disparate observational records.

The result is multiple lines of evidence that human activity has intensified extreme precipitation during recent decades. Even when the data sets were widely different, we were able to see the human influence.

The findings were published July 6, 2021, in the journal Nature Communications.

Understanding how humans influence extreme precipitation is important for interpreting climate events today and for preparing cities and protective infrastructure for the changing world ahead.

In recent years, devastating flooding has made headlines after extraordinary rainfall that historically would have been extremely rare. The 2017 hurricane season in Texas, Florida and Puerto Rico and the extreme monsoon rains over India and Bangladesh in 2017 are two examples. Our results indicate that, as a general rule, precipitation has become more extreme around the world in recent decades.

Perhaps more importantly, our results indicate that further warming of the planet through the 21st century is likely to continue to intensify the most extreme precipitation events. Climate models project such an intensification will happen this century, and they suggest that a similar but less-rapid intensification occurred in the 20th Century, based on how much the planet has already warmed. Our results validate that finding.

With greenhouse gas levels in the atmosphere still increasing, the planet is projected to continue warming through the 21st century. How much it warms will depend on choices made today about fossil fuel use and other major contributors to climate change. That 1 degree of warming could be 4 degrees by the end of the century if emissions continue at a high rate. 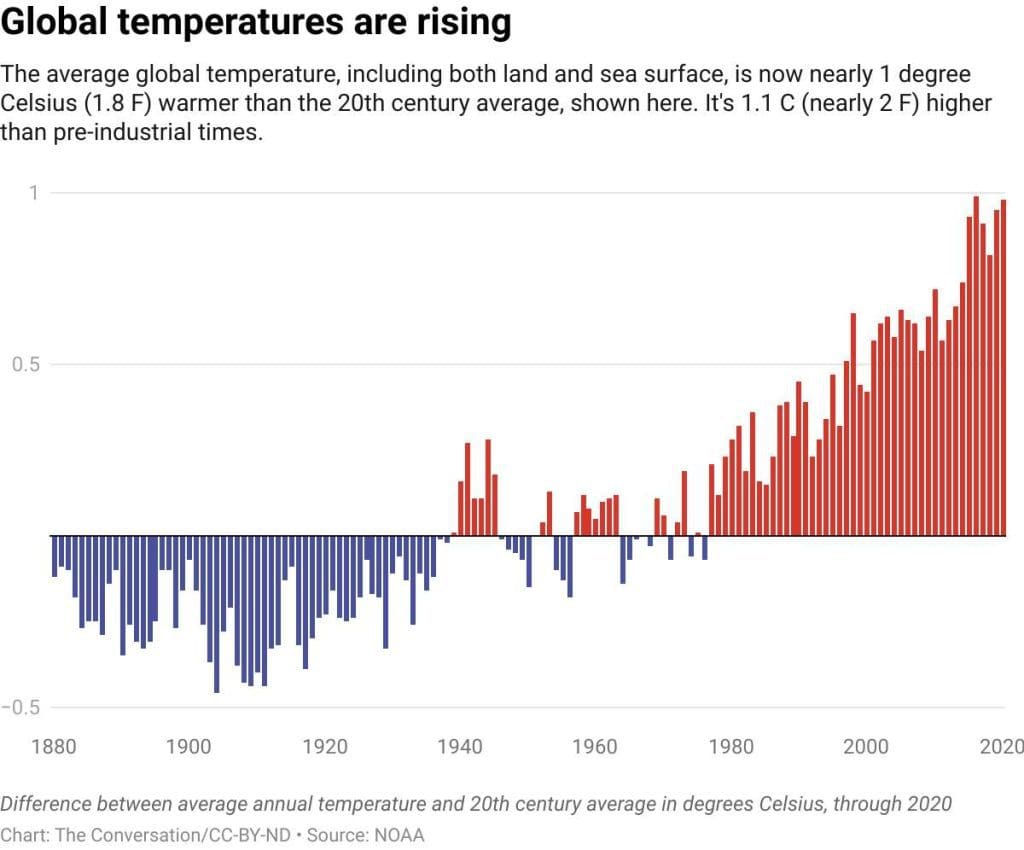 While we clearly identified the influence of humans on extreme precipitation in the past, we haven’t yet isolated how much each type of human activity has contributed. Greenhouse gas emissions, aerosols and changes in land use can all have an influence. We plan to modify our machine learning method in the future to home in on those sources.

The machine learning method we used is also currently learning from data alone. We can take this up a notch by bringing climate physics into the algorithm. By doing that, the machine would learn the physical processes that lead to intensifying extreme precipitation. Other climate variables could be included, such as winds, clouds and radiation, helping to answer not just whether extreme precipitation is intensifying, but why.

NancyOnNorwalk is on vacation and will not be allowing comments until Sept. 7. We apologize for the inconvenience.

I have a hockey stick to sell you.

Here’s a better idea. Visit Africa and then they involved with improving health care. The sheer numbers of those dying prematurely vastly overwhelm those who might suffer premature death from unwanted climate change. Visit Africa and see a world where most never see a doctor or visit a hospital.

AOC says its human caused. But 4 billion years ago, and from that time on there has been climate change. Engineers have designed and built technologies that reduce pollution to carbon dioxide. Carbon dioxide is an ESSENTIAL constituent of life despite the SCOTUS definition of a pollutant. Fossil fuels ARE renewable. Time-pressure produced. Fossil fuels are a blessing to human survival. Electricity is produced by fossil fuel. Solar panels and wind turbines are INADEQUATE to support our population and our energy requirement.
Engineering and Science hucksters are beholden to AOC who is ignorant to the reality and the practicality of energy use and production. They can make a good buck on a stack of lies.