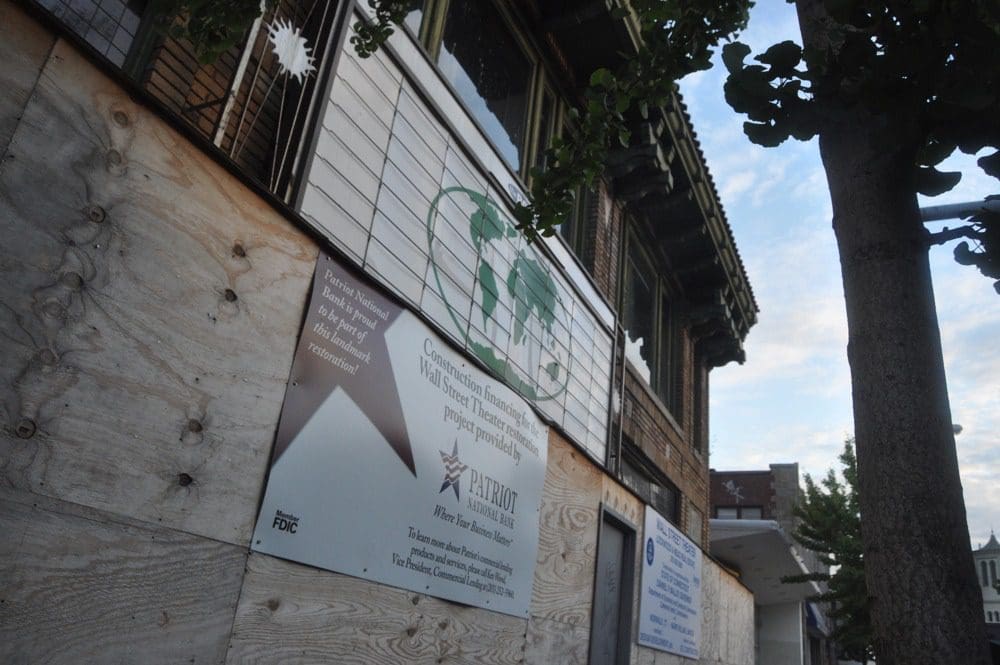 The Wall Street Theater (formerly the Globe) won’t be close to ready for its 100th anniversary party, but there will be a street festival instead.

NORWALK, Conn. — There’s nothing going on at two key pieces of Norwalk Wall Street property, but while one owner expresses confidence that things will get going soon, the other is MIA with no explanation as to the stall in construction.

Frank Farricker of the Wall Street Theater (formerly the Globe Theater) said work on the theater’s façade might start within a few weeks, provided a matter he described as a paperwork hold-up clears up in the manner he expects. Because he’s not going to be open as planned on the theater’s big 100th anniversary, he has planned a street celebration, free to all. 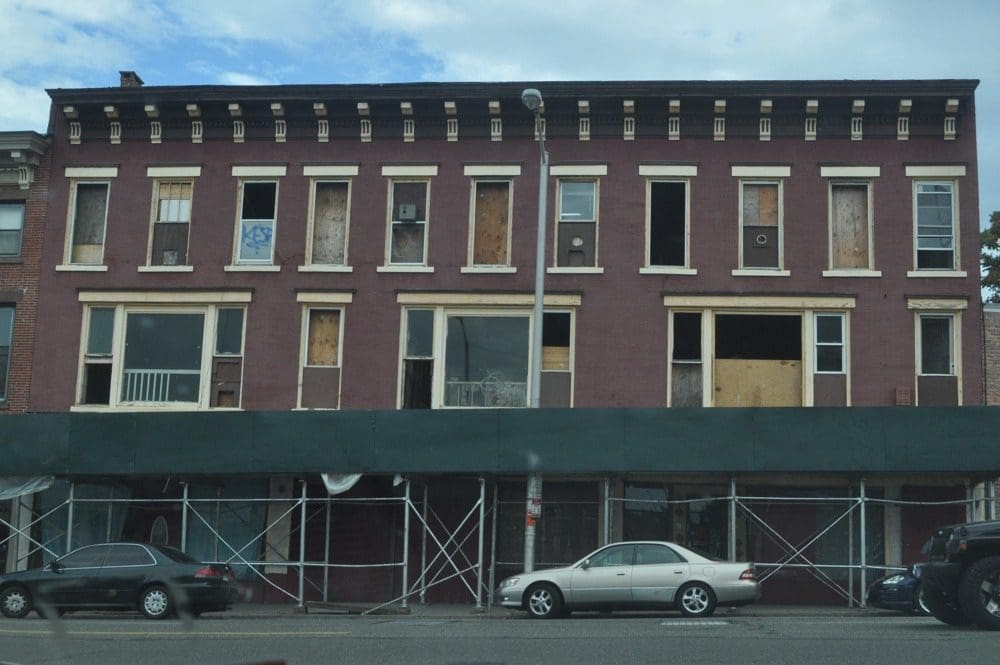 Work has stopped at Ganga Duleep’s building at 45 Wall St.

Meanwhile, there’s nothing going on down the street at Ganga Duleep’s property, and city officials profess no knowledge of why work stopped.

Duleep does not return phone calls or emails.

Duleep’s building at 45 Wall St. has sat vacant and dilapidated since August 2010 when it was consumed in flames. Renovation work finally began in late June, but nothing has happened there in nearly four weeks, according to Michael McGuire, who works in an office across the street.

“The building is open to the weather – I can look right through one of the windowless window openings right through to the rear of the building,” McGuire said in an email.

Norwalk Chief Building Official Bill Ireland said last week that he didn’t know anything about what is going on with Duleep’s building, because regular inspections are not required. He promised to send an inspector over there to find out what is going on.

Duleep would need the approval of the Redevelopment Agency to install new windows, as any changes to the exterior of the historic building are subject to a design review. RDA Executive Director Tim Sheehan said Wednesday that nothing has been submitted for design review. He had no idea why work has stopped, he said.

Farricker had said that his theater would be open by its 100th anniversary in September. Now he is saying it will open next spring.

“We’re doing last bits of negotiations on what’s called the waiver with HUD (U.S. Department of Housing and Urban Development),” Farricker said. “Hopefully we’ll have resolution on that very soon.”

Explaning further, he said, “There’s an interpretation of statute that there wasn’t an agreement on, but we seem to be on the same page as Washington now, with Redevelopment, and that process is underway. I know, we are as frustrated as anybody else. We understand the reason for the delay.”

The Traffic Authority recently approved Farricker’s request to close Wall Street from Isaac Street to West Avenue from 8 a.m. to 10 p.m. Sept. 27 for a street festival that will “promote awareness and generate excitement for the grand re-opening of the historic Wall Street Theater,” a press release said.

“After a long hiatus, the structure is set to re-open its doors in the spring of 2016 as a non-profit, multi-media performance space. The street festival honoring the theater will take place right on Wall Street in Norwalk from 12 p.m.-6 p.m. and promises to be a day of fun, food, and entertainment for the whole family.

“Attendees can jam out to live musical performances to national acts with local roots: singer-songwriter and Norwalk native P.J. Pacifico will start things off, followed by gypsy-swing quartet Caravan of Thieves and finally the powerhouse vocals of (Deep Banana Blackout vocalist) Jen Durkin & The Business. Children’s Music will be provided by Norwalk’s own Marcia Louis.

“Tours of the theater will be given and staff and advisors will be on hand to talk about future plans for the theater. Executive Director Bob Kennedy commented, ‘The first 100 years of the Wall Street Theater brought the biggest stars of American theater, Presidents of the United States, award winning films and legendary musicians to Norwalk.  This event is the first of many that will help bring Wall Street back to its roots as a center of entertainment and culture.’

“The Wall Street Theater first opened its doors in 1915 and is listed in the National Register of Historic Places, making it an essential piece of Connecticut history. It has operated under numerous names such as The Marquee, The Globe Theater, and The Roxy, while shifting its focus from a live theater space to a big-screen movie theater, and finally to a music and dance club.

“The refurbished theater will be fully equipped with the latest technology to embrace its past and provide a true entertainment experience for its visitors. In addition to showcasing plays, musicals, concerts, operas, and dance performances, the Wall Street Theater will be used as a venue for private and business rentals. It will both stimulate the Norwalk economy and provide cultural and educational opportunities for youths and the older population alike, making it a huge asset to the community.

“The Wall Street Theater has been fortunate enough to have received a $5.2 million loan from Patriot National Bank in order to make its re-opening possible. Further donations or requests for more information can be directed to 203-283-5290 or www.wallstreettheater.com.”

“Duleep does not return phone calls or emails.

Duleep’s building at 45 Wall St. has sat vacant and dilapidated since August 2010 when it was consumed in flames. Renovation work finally began in late June, but nothing has happened there in nearly four weeks, according to Michael McGuire, who works in an office across the street.”

What happened to the big new blight ordinance?

As we reported previously, she is accumulating fines per the ordinance.

Thank you, I’m sorry for having missed that info.
Accumulating fines notwithstanding (unpaid fines I assume), she seems Untouchable. I don’t understand why.
I don’t see why the city didn’t seize and demolish the hovel years ago. If such an action would be illegal, so what? As she lacks resources to fix the building, she also lacks any ability to sue the city for Doing The Right Thing.

JEN DURKIN is a world-class vocalist and entertainer, albeit one who has never received due recognition and rewards. That said however, the Globe is a 1,000-capacity venue, and if the expectation is that local performers and a puppet show will keep the lights on, somebody’s going to take a bath.

yep.. good luck with this: $5.2 million loan from Patriot National Bank ….especially when there is no equity in the project.

So Citi/Fanny Mae will own whatever becomes of Poko some day and Patriot will own the Globe.

That is Redevelopment Agency economics for ya…

Hooray for the Theatre–providing it actually happens…

As for the Duleep building, it was in bad condition (internally at least) even before the fire. And those windows have been uncovered since the fire, so I can only imagine the weathering the inside has received. Isn’t she getting insurance money to fix this up? It’s a mystery to me as to why this is still going on.