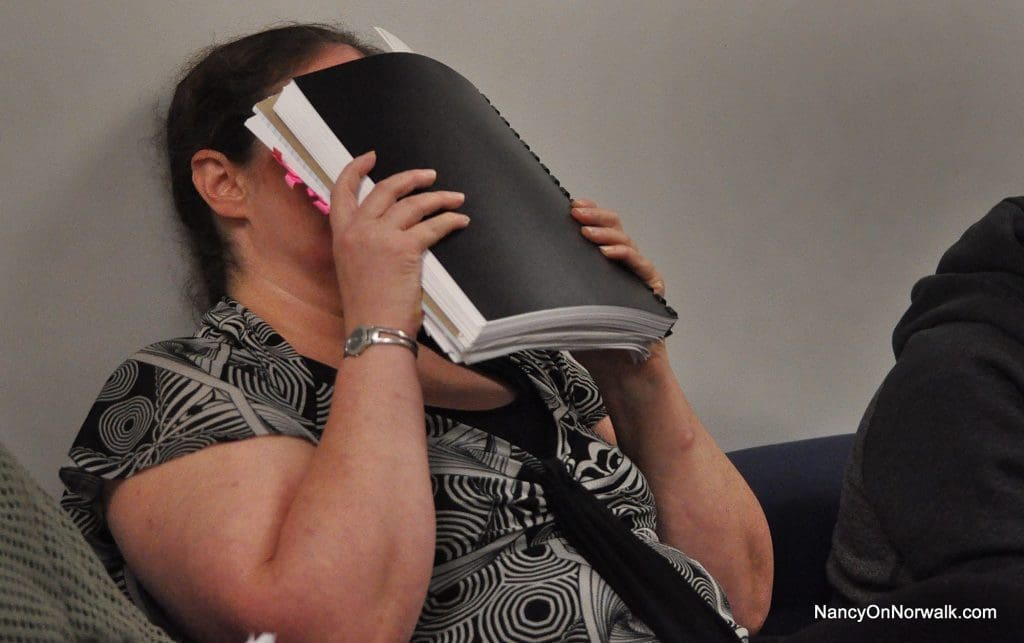 “This is a one-sided agreement that benefits the DOT,” Goldstein said in a letter to Council members.

But their effort was somewhat impotent as the actual drafted agreement was not provided to the public.

The drafted agreement is included in the packet for Tuesday’s Council meeting. Goldstein, in her Monday email, urged the Council to table the item and reconsider it.

Council President Bruce Kimmel (D-At Large), in a late Monday email, said the Council was undecided on that point.

“We plan to finalize our position tomorrow before the Council meeting,” Kimmel said.

The drafted Master Municipal Agreement for Rights of Way Projects was sent to all of Connecticut’s towns, as early as 2014, ConnDOT Director of Communications Judd Everhart said in a Monday email.

Wilton executed it but other Fairfield County municipalities did not, and it was resent on Sept. 30, he said.

Almost all of the Fairfield County municipalities executed a construction Master Municipal Agreement, Everhart said, listing Darien as the exception.

“The ROW MMA is just another step in that process,” Everhart wrote. “The ROW MMA is the same language as in the previous agreements that all the municipalities signed for individual projects in their respective towns. The MMA streamlines the process for initiating a ROW phase for future projects in the town and is good for 10 years.”

The agreement is for projects managed by Norwalk, not the state, he said.

“The ROW MMA simply allows the state to acquire property for municipal projects funded with state and federal funds,” Everhart wrote. “If the City of Norwalk does not execute the ROW MMA then it will have to acquire all the necessary property rights for future construction project and ensure that all rights are acquired in accordance with federal and state law.  Many municipalities are not equipped to undertake such acquisitions and prefer to have the state acquire the property rights for the projects.”

Goldstein, a Third Taxing District commissioner, provided Council members with an extensive list of objections to the agreement (bolding by Goldstein):

“Aside from the initial whereas clause, reference is made to mutual agreement only twice:

“However, the DOT is given sole discretion twelve (12) times:

–         “once to allow the DOT to disallow reimbursement of expenses for failure to maintain proper records or to produce them upon request,

–         “twice for the DOT to suspend, postpone or terminate for convenience,

–         “once to allow the DOT to determine whether it is both parties’ interests to terminate the project if Norwalk requests to cancel the project,

–         “once to give the DOT sole discretion over the reimbursement of expenses on work done previously on a suspended/postponed/terminated project,

–         “once for the DOT to decide whether to return any of the “Demand Deposit” in the event the DOT terminates a project,

–         “once for the DOT to make the call about which provision applies in the event of a conflict among the PAL, the MMA and any mandatory state and federal requirements,

“And though it doesn’t explicitly require sole discretion, if the term of a PAL (spec sheet) expires or the DOT cancels a project for convenience, the PAL still has to continue to completion, which disempowers Norwalk.

“If this agreement were, in fact, designed to streamline the agreement/reimbursement process for City of Norwalk projects that are receiving State and/or Federal funds, the terms would include processes and timelines for submitting records and timelines and methods for disbursements to Norwalk.

“Those items are just not in evidence.

“To the extent that it “streamlines” the process, it does so only by taking any discretion or negotiating power away from Norwalk, and transferring it to the DOT. This works very well when Norwalk and the DOT are in agreement with the progress on a specific project.

“To evaluate this contract properly, Councilmembers and Corporation Counsel must ask the ‘what if’ question.

What if, after agreeing to the PAL, the DOT alters the scope and Norwalk no longer agrees with the scope of the Rights of Way?

–         “Norwalk can ask to terminate, and the DOT gets to decide whether they can, whether they get their deposit back, whether to reimburse on any prior outlays—all in its sole discretion AND the PAL has to continue anyway. Furthermore, the land that gets acquired, no matter who pays for it, can only be used for transportation projects after the ROW are acquired.

“The effect of this agreement is to provide the DOT with a funding cudgel. Once a PAL is signed, the DOT gets to make all of the decisions about the scope of the project, and it gets to decide to cancel a project, pull funding, or even to force a project to completion without paying for it, if Norwalk balks. After the ROW are complete, no other use of the ROW is possible, except “Transportation” and Norwalk doesn’t do “Transportation” without Fed/State funds, so control of the land will still live on with the decisions of the DOT.

“Do you really need these terms to “facilitate/streamline” reimbursement?

“At a minimum, Corporate Counsel should request that most or all instances of “sole discretion” appearing in the contract be replaced with language that provide for “consent by the DOT which shall not be unreasonably withheld” or, where reasonable, provide for “the DOT, by mutually agreement with the Municipality, which shall not be unreasonably withheld”.

“Once again, the Council has utilized the negotiation of ROW in the past to try to gain more favorable scoping of projects in line with the desires of the community. This will not be possible under this agreement when the DOT disagrees with Norwalk.”

Well done Ms. Goldstein. The real purpose of the agreement is to force residents and businesses subject to eminent domain seizure for building a questionable billion dollar bridge is to force them to fight the CT DOT rather than protest and complain to City officials. Local protests are bad for City politicians. Everyone knows why City officials have rejected Congressman Himes offer to secure a USCG change in river navigation status which would allow using the existing bridge in a closed position. City politicians are taking orders from Hartford. Never mind 5 to 6 years of massive disruption and major economic loss to our City. It’s our Mayor’s “Legacy Project” for Norwalk.

Most CT Cities and towns have not signed the Master Agreement. Anyone wonder why ? And why the “rush” to sign it ahead of elections ?
Editor’s note: The agreement being considered by the Common Council would apply to city-managed projects. The Walk Bridge replacement is a state run project. The agreement would have no jurisdiction to the Walk Bridge project. It would be authorized on case by case basis by the Common Council, on city-managed projects such as the replacement of the Perry Avenue bridge.

The editor’s note is correct. This does not apply to the Walk bridge. However, it is still important that the council retain its ability to shape and negotiate City managed projects.

All of us recognize that after 3 months of inaction, the delayed esponse of City Hall and Common Council, to 2000 pages of documents from the DOT bodes of just hiring a “lawyer” bodes iill for the future of Norwalk. The Walk Bridge project will give Norwalk a powerful lesson about the requirements of effective City governance. Takes more than the “politicians arts”. Even a City with a professional manager and highly accomplished Council members would be hard pressed to protect City interests with a project of this size and complexity. But this is Norwalk.