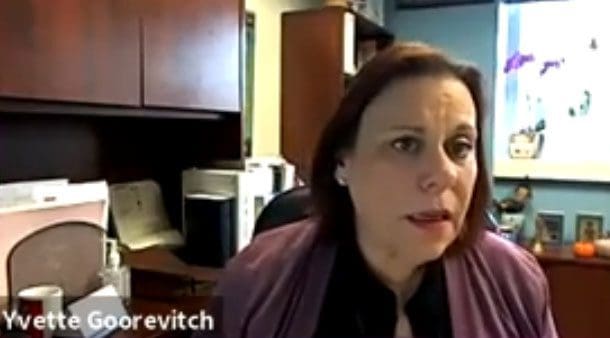 Goorevitch acknowledged this Tuesday after her interest, which comes six months after Alexandra Estrella began work here as Superintendent of Schools, was outed Saturday by New Rochelle blog The Talk of the Sound.

“Interim Superintendent Dr. Alex Marrero wants to hear from New Rochelle School community members who have concerns about the potential return of Yvette Goorevitch to the City School District of New Rochelle — this time with potentially more power to do harm to minority and economically disadvantaged students,” blogger Robert Cox wrote, alleging further that Norwalk “has been seeking to run {Goorevitch} out of town on a rail since the moment she arrived.”

The story “has resulted in some really very mean-spirited (social media posts), what I would call bordering on harassment and bullying,” Goorevitch said.  “I am not looking to leave, no one is pushing me out, thank you.”

Goorevitch still lives in New Rochelle, she said Tuesday. Her children went to school there and her grandchildren are enrolled there now, thus she agreed to “what I thought would have been a confidential conversation” about a return to the district. She told Norwalk’s Ad Hoc Special Education Committee of having discussed a senior management position with another district after having been encouraged by members of that community. “I want to give a statement to you all, so that, you know, that bit that this committee knows, and that the community knows my deep commitment to continue the work that we’ve embarked upon,” she said.

Goorevitch became Norwalk’s Chief of Specialized Learning and Student Services in June 2017, and her stability in the role has ended the sense of a revolving door of leaders. She had been the Director of Special and Alternative Education for the City of New Rochelle since 1991.

In June, longtime Norwalk SpEd activist Jeff Spahr said “There were a lot of open wounds” when Goorevitch came in and “she did a marvelous job on it, of healing a lot of those wounds. And we’re still in the healing process.”  Spahr lauded Goorevitch for working to create SPEDPAC (Special Education Parent Advisory Council).

Goorevitch came in as Norwalk was investing $3.6 million in a three-year plan to upgrade its SpEd Department, after cost overruns and scathing criticisms from the Capitol Region Education Council (CREC). The first year of that plan was executed under the previous director, Lynn Toper.

In 2018, the district’s SpEd department was targeted by a complaint to the State Department of Education, brought by attorneys working pro bono and representing 17 Norwalk school children.  In 2019, the State said Norwalk had been violating federal Special Education laws and ordered individual and systemic corrective action; Goorevitch said that stemmed from the 2017-18 school year and there were “no gross violations.”

Goorevitch, speaking Tuesday, said improvements in Norwalk’s Special Education department and its communications with stakeholders have been recognized both locally and statewide. Norwalk’s most vulnerable schoolchildren, including multilingual learners, were given opportunities during the distance learning phase and are now getting afterschool instruction, she said.

“I think regionally, even those who are our typically strongest critics have all held up what we are doing… as a model,” Goorevitch said.

Ad-Hoc Special Education Chairwoman Erica DePalma said, “I think I speak for this committee, based on the conversations we’ve had in the past, that the specialized learning department at NPS has truly moved mountains in this environment.  We are the envy of a lot of surrounding districts. And you know, thank you and the rest of the staff for what you’ve been able to accomplish during this time.”

How about we take a survey from parents and see what they think about what is going in Norwalk. I’m so tired of hearing that she thinks that she has turned Norwalk around and that it’s this great school for special education. Shall we FOIA all lawyer fees and see how many SPED kids have left the district? Should we FOIA all the exit interviews of the MANY people who have quit the district because of HER!

How many kids are in these programs she has made? Who is it benefiting?

This committee she made, what has been done? Where is their forward progress?

She feels bullied? What about the countless parents who have had to leave and get help elsewhere for their kids? How do they feel?

She talks a very good game but I can tell you 100% that’s not what goes on behind the scenes.

I don’t feel sorry for her at all!