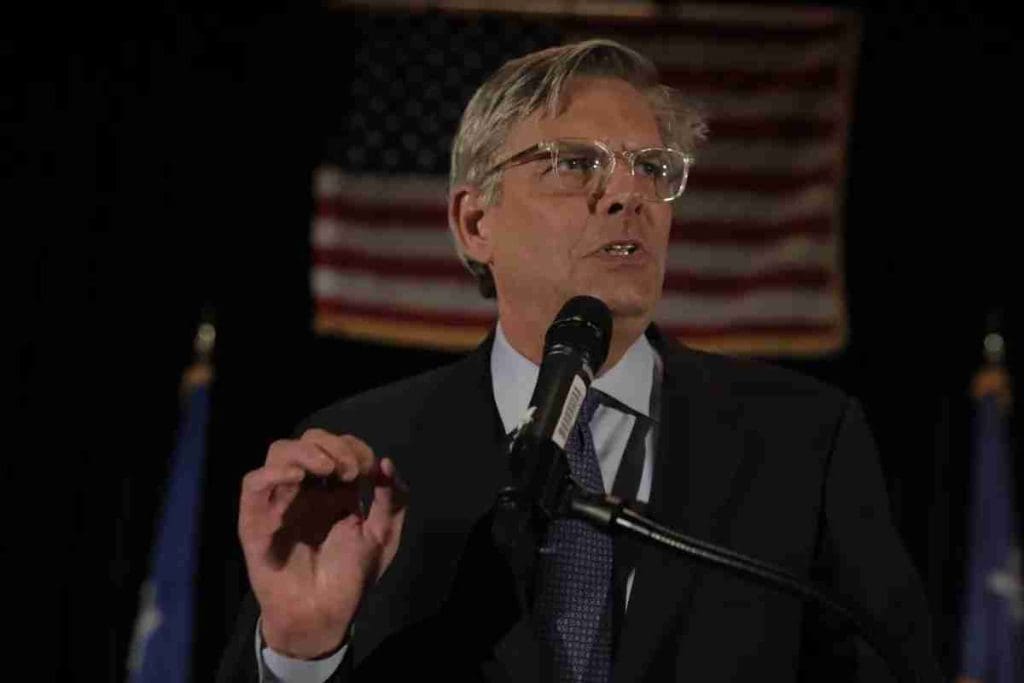 Republican gubernatorial nominee Bob Stefanowski addresses the delegates at the Republican convention at Foxwoods on May 6, 2022. (Yehyun Kim, CTMirror.org)

Connecticut Republicans united Friday night behind the rebooted gubernatorial ambitions of Bob Stefanowski, the businessman who outflanked the GOP establishment in 2018 only to lose by three points to Gov. Ned Lamont.

Stefanowski, 59, of Madison is a former corporate CEO who’s pledged $10 million of his own money to do what hasn’t been done since 1954: Unseat an incumbent governor in Connecticut, the Land of Steady Habits.

In a ballroom at Foxwoods Resort Casino, delegates to the state convention endorsed Stefanowski and his running mate, Rep. Laura Devlin, 61, of Fairfield.

“We did it,” Stefanowski said, smiling broadly and raising his fist.

Delegates also endorsed Rep. Harry Arora of Greenwich for treasurer and Jessica Kordas of Norwalk for attorney general. Voting resumes Saturday on contested nominations for comptroller, secretary of the state and U.S. Senate. 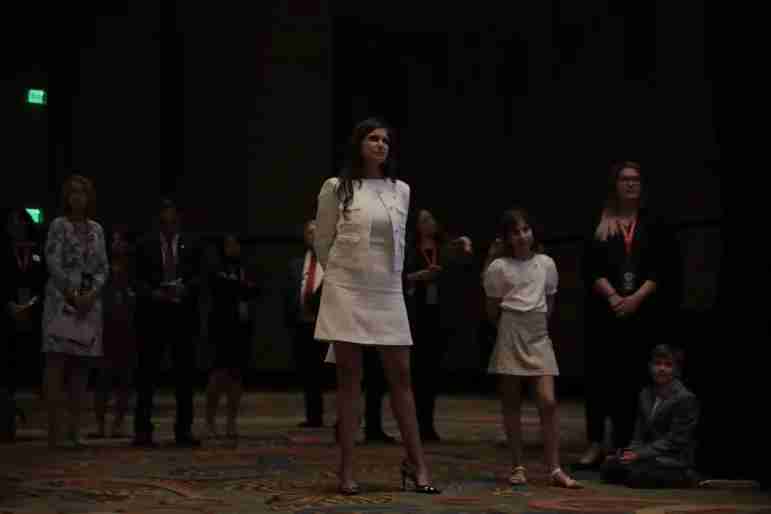 Jessica Kordas, Republican candidate for attorney general, listening to her nomination while standing next to her two children. (Yehyun Kim, CTMirror.org)

Stefanowski’s acceptance speech went straight to the heart of his message, and his challenge: Republicans are prosecuting a case of Democratic fiscal malfeasance in a year of tax cuts, surpluses, smaller debt and fat reserves.

“After 40 years of a Democratically controlled legislature, Connecticut is the definition of a failed state — billions and billions of debt with absolutely nothing to show for it,” Stefanowski said.

Watching was Tim Ackert, a delegate and state representative from Coventry.

He has already heard Lamont repeatedly make a succinct argument that Connecticut has rebounded, sometimes even praising Republicans like Ackert for helping set significant guardrails against overspending in a bipartisan 2017 budget.

The Republicans have a case to make, he said, but the Democrats right now have a two-word bumper sticker: Tax cuts.

Ben Proto, the Republican state chair, said Stefanowski will be aided by the specter of inflation and the impact consumers already see when they buy groceries or pump gas.

Four years ago, Stefanowski promised revolution. He offered a daily affirmation of his vow to rip costs from state government and make its income tax disappear over eight years, a supply-siders prescription for growth. 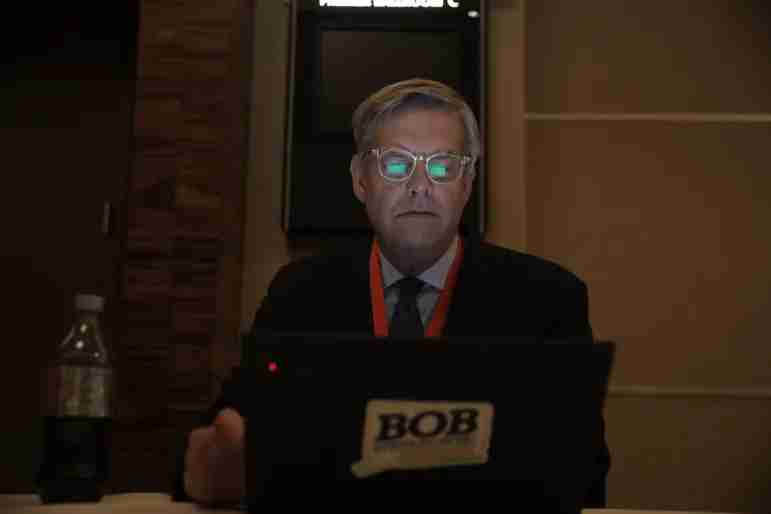 This year, he is talking more modestly, almost generically, about making Connecticut just a little bit more affordable. He riffs on Ronald Reagan’s 1980 campaign in which inflationary fears made voters receptive to unseating an incumbent Jimmy Carter.

On Friday, Stefanowski talked about simpler times, better times when his folks worked for the phone company, a symbol of steady income and a path to the middle class.

“Life was simple. The neighborhood was safe. Utility bills, groceries, gas prices were all affordable. You could actually buy a car without having to wait six months to get into him,” said Stefanowski, who grew up in North Haven. “My three three sisters and I received a great education from the public schools.

“We graduated from Connecticut colleges without a ton of crushing student loan debt. Connecticut was a winner, the envy of the nation with low taxes, a state government that knew when to help — and when to get the heck out of the way.”

That message may have had a greater resonance four years ago. 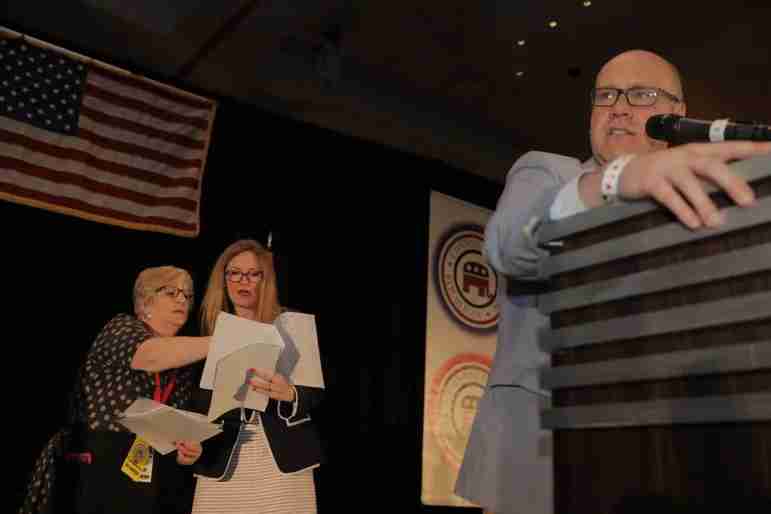 Stefanowski was vying then for an open seat, trying to succeed an unpopular Democratic governor who had inherited a massive deficit, repeatedly raised taxes and saw revenues fall short of projections in six of his eight years.

Stefanowski is mixing his fiscal message this year with an appeal to parents disaffected by the impact of COVID-19 on their children’s education and a nod to the conservative talking points on social media and Fox News about the erosion of parental influence over what their children learn in schools.

“My vision for Connecticut emphasizes the fundamental values that have made the United States the greatest country on Earth, an ability to provide Connecticut residents with personal freedom, individual liberty, smaller government that allows residents to live their lives as they see fit — a vision that will let parents, not state government, raise their kids,” Stefanowski said.

It may have been his loudest applause line. 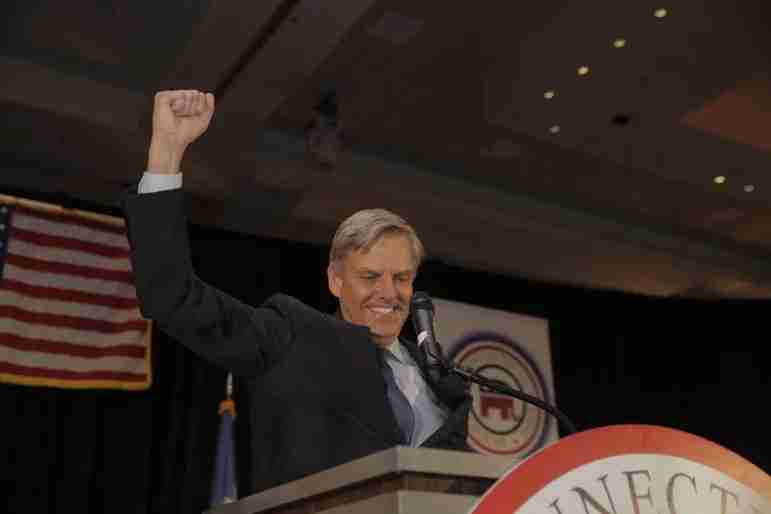 Republican gubernatorial nominee Bob Stefanowski addresses the delegates at the Republican convention at Foxwoods on May 6, 2022. (Yehyun Kim, CTMirror.org)

Neither Stefanowski nor Devlin took note of the Supreme Court’s expected repeal of Roe v. Wade, ensuring abortion will be an element of every statewide race in America. Devlin recently voted for an abortion-rights bill that establishes Connecticut as a safe harbor for women seeking abortions.

“I’m running for lieutenant governor because we need a team leading our state that listens to the people, that isn’t afraid to take action and demands accountability for the people,” said Devlin, a former Pfizer executive. “Our state deserves better than what they’re getting.”

Republicans have not won a statewide race since M. Jodi Rell was elected governor in 2006. A brief GOP resurgence from 2010 through 2016 collapsed in the midterm election of 2018, when the party could not overcome the unpopularity of President Donald J. Trump.

This year, Republicans insist the unpopularity of President Joe Biden has created an opening for Stefanowski, whose disinterest in politics before 2018 was measured in his failure to vote for 16 years, casting no vote in 2016 for Trump or Hillary Clinton. 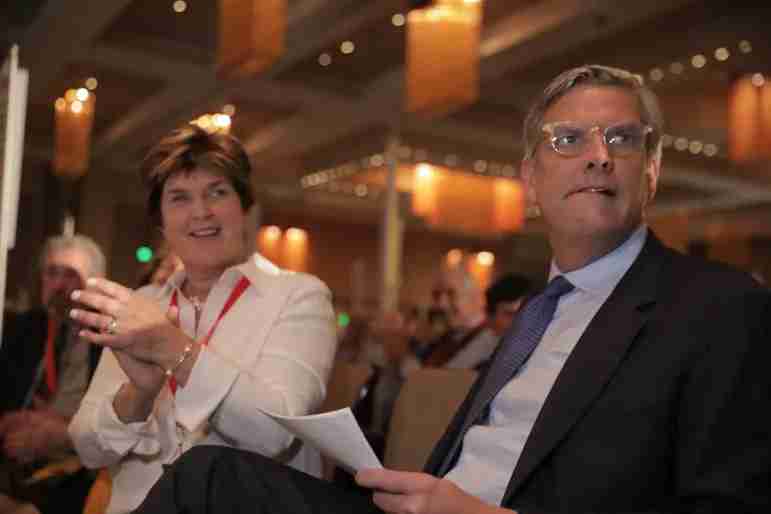 “We’ve got 185 days left, ladies and gentlemen, to win this thing,” Stefanowski said. “Let’s not look back. Let’s not leave anything on the field. Let’s have no regrets. Let’s be aggressive. Let’s be honest. Let’s be fair.”

Stefanowski had a long career in corporate finance, with stops at GE and UBS. But his last job was one that was an issue in 2018 and will be again: He was the CEO of a global payday loan company whose product line is illegal to offer in Connecticut.

Stefanowski’s campaign four years ago was that of an insurgent, a political unknown who introduced himself on early television advertising, skipped the GOP convention and petitioned for his spot in a five-way primary.

“What a difference four years makes,” he said, smiling.

He arrived in Mashantucket, the home of Foxwoods and the Mashantucket Pequot reservation, knowing the nomination was his, albeit one briefly delayed by Susan Patricelli Regan, a marketing executive who had spent about $7.500 on a Quixotic effort to lead the party.

Stefanowski said he didn’t mind having to wait.

Failed State ? A decade of stagnant economy, population and employment level meets that definition. With high regional State and local property taxes discouraging major firms from investing in CT. With public Unions spread across our 169 towns and cities as our largest “industry” in terms of employment. With our 3 largest severely depressed cities – home to most of our African residents – where incomes are just half the CT average ?
Where most of our high school students never secure 4 yr college degrees.

For the nation’s wealthiest State the record is pretty shabby,. Could Republicans do any worse ? What hurts the most is our kids are leaving CT seeking better opportunities elsewhere and we’re being bypassed bythe high tech revolution. With a reported only 1 in 3 born here we’re being the transient “in out State”.

Those familiar with CT’s astonishing history oft leading the nation in industrial innovation and development, the Arsenal of Democracy in WWII whose submarines swept the Japanese Navy off the seas and whose Pratt and Whitney airplane engines commanded the skies CT has a proud history as an innovative manufacturing State par excellence.

Who will guide the resurgence of a once proud CT ? Time for a change in State governance. And lets change to a full time Legislature to attract the necessary talent to secure our desired future. Governing isn’t a part time activity.