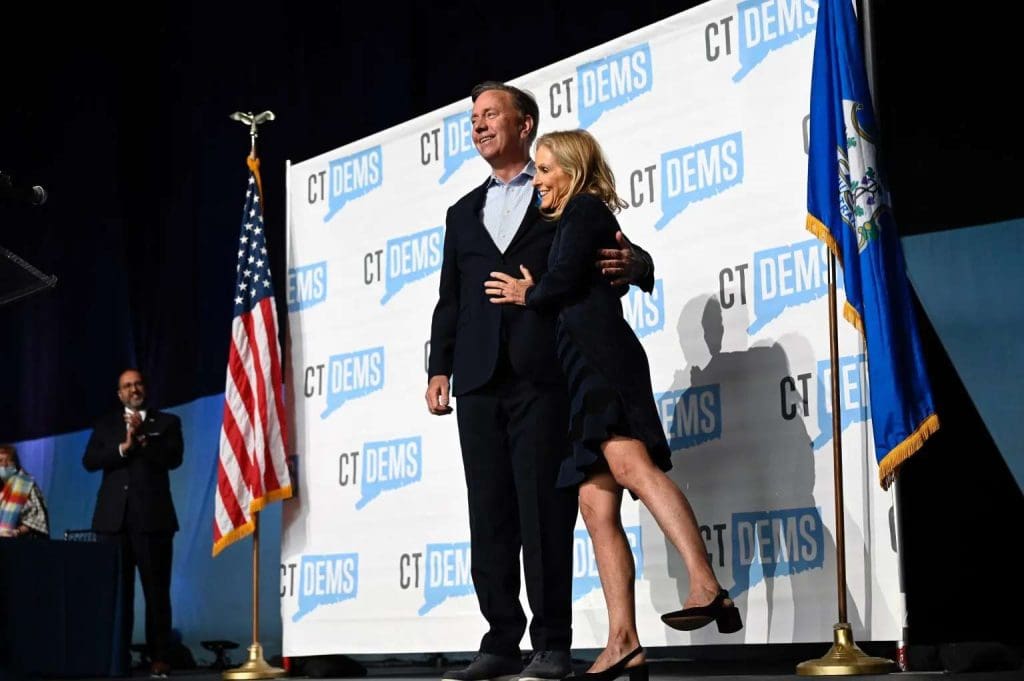 Gov. Ned Lamont and his wife Annie at the Democratic party convention in Hartford on Saturday, May 7. (Joe Amon, Connecticut Public)

Gov. Ned Lamont’s adjusted gross income was $54 million in 2021, a nearly seven-fold increase over the previous year, driven by $52.7 million in capital gains, according to tax records released Friday.

The Democratic governor’s campaign released summary pages of his state and federal tax returns that do not identify what holdings were sold to realize the capital gains, nor do they explain the timing.

The spike in income was not a sign of selling off assets a year ahead of his self-funded reelection, nor does it represent a planned campaign budget, a campaign spokesman said.

Whatever Lamont ultimately spends on his reelection will come from assets liquidated this year, generating capital gains to be reported on the tax returns to be filed next year, his campaign said.

In April, his campaign released the summary pages for the three previous tax years, reporting adjusted gross incomes of $7.77 million in 2018, $10.14 million in 2019 and $8.02 million in 2020, nearly all generated by investments. The governor takes no salary from the state.

Lamont had filed for an extension for 2021, pushing his deadline to Oct. 15.

His Republican opponent, Bob Stefanowski, a financial consultant, released the same summary pages last month, showing an average annual income of more than $12 million over the past three years without disclosing the source.

Since then, confronted with documents obtained by Hearst Connecticut, Stefanowski confirmed that he has been consulting over those three years for Neom, a company founded by the crown prince of Saudi Arabia.

Lamont and Stefanowski have been engaged in a chronic back and forth over who is more transparent about their finances. The stakes were raised since Stefanowski disclosed he still is getting income from the Saudis.

“Today, Gov. Ned Lamont is continuing his record of being transparent with Connecticut residents, something he believes all candidates should do,” said Jake Lewis, the campaign communications director.

As he has done in other years, the governor shielded his wife’s income by filing a married-filing-separately return, an option used by about 5% of American taxpayers. His wife, Annie Lamont, is a successful venture capitalist.

On Thursday, Stefanowski faulted the governor for filing separately.

“It’d be great to know how he’s funding his campaign,” Stefanowski said, “because as far as I can check, he hasn’t made enough money himself to put $14 million in his campaign, which means he’s using family money, which means when he discloses his income he should disclose his family income.”

Lamont, 68, of Greenwich is the beneficiary of generations of family wealth, assets realized from a cable company he built and sold, plus income generated by his wife, a co-founder and managing partner of Oak HC/FT.

His campaign declined to outline how income from joint holdings were apportioned in the separate tax returns. Stefanowski filed joint returns, but he did not disclose how much of the $36.8 million in income he and his wife, Amy, reported over the past three years was earned by him.

Lamont said Stefanowski was in no position to complain about transparency when he just admitted to concealing his consulting with Neom, the company founded by Saudi Crown Prince Mohammed bin Salman.

Stefanowski acknowledged approaching the Saudis for work in late 2018, not long after Saudi agents killed Jamal Khashoggi, a Washington Post columnist critical of the regime. U.S. intelligence has concluded Mohammed most likely ordered the murder.

Lamont was asked Thursday if he thought Stefanowski’s consulting resonated with voters.

“Not really sure that it does. But I think he worried about it,” Lamont said. “That’s why he was very hesitant to reveal the fact that he’s getting paid about a million bucks a month by the Saudis. You know, Mr. Transparency had something to hide there.”

Stefanowski has made an issue of Sema4 getting one of the fast-track contracts the state awarded for COVID-19 testing in the early days of the pandemic.

Oak HC/FT is an investor in Sema4, a fact disclosed by the Lamonts in a filing to the Office of State Ethics. The contract was awarded by the comptroller, an office overseen by an elected official, not the governor.

A super PAC funded by the Republican Governors Association is running a television commercial saying the Lamonts profited from the state business.

The Lamonts say they have derived no income from Sema4, whose value has tanked. From a peak of nearly $26 a share in February 2021, it was trading Friday at less than a dollar.

Lamont and Stefanowski released tax information by custom, not a statutory requirement.

As an elected officer, Lamont files annual statements of financial interest that disclose sources of income and direct investments, a minimal standard.

If elected, Stefanowski would have to disclose next year only that he derived income from his consulting firm, Lolo, not the identities of the clients who paid him.

In the case of Annie Lamont, she generally needs only disclose deriving income from Oak HC/FT and its various partnerships

In a filing with the Office of State Ethics, the Lamonts also identified companies in which Oak is invested, exceeding the requirements of the state ethics code. The governor has placed his own investments in a blind trust.

“He has gone above and beyond what is required — placing his assets in a blind trust and reporting his holdings each year to the state ethics office,” Lewis said.