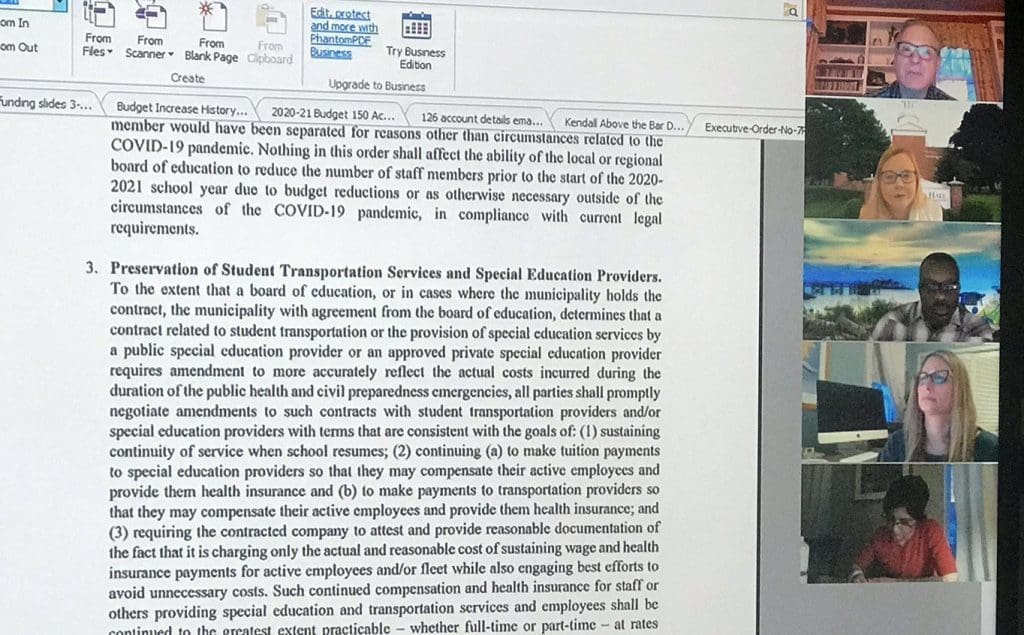 NORWALK, Conn. — Costs to Norwalk Public Schools for COVID-19 are building up. But there are also savings.

“It’s a pretty big undertaking to try to figure this out,” NPS Chief Financial Officer Thomas Hamilton said to the Board of Education Finance Committee, detailing the pluses and minuses caused by Gov. Ned Lamont’s various executive orders during the pandemic.

Lamont ordered that employees not be laid off and most of those costs are covered by the continued funding from the State and the City, but cafeteria workers are paid for by the revenues from the school lunch program, Hamilton said.

NPS has been offering free food to families during its sudden switch to distance learning. There are far fewer meals being served and when NPS stopped delivering them by school bus, the number dropped significantly, Hamilton said. It’s gone from 20,000 meals to 3,200.

Finance Committee Chairwoman Barbara Meyer-Mitchell asked if there would be a deficit in the food budget at the end of the year because the federal government won’t be reimbursing costs.

“I believe that food service may very well be the single largest area where this crisis has thrown us into a unplanned or unexpected shortfall,” Hamilton replied. “I think that may very well be a million dollars or perhaps even more.”

“Ironically, not because we were trying to deliver to as many people as possible, but it was when we pulled it back,” Meyer-Mitchell said.

There are 20 people total working at the 10 food sites that people can go to, plus security guards, Hamilton said. “The food at this point is now all being delivered, coming from an outside vendor, so we’re not producing the food in house at this point. But we’re required to keep all the staff on under the executive order. So we really have this mismatch between our cost structure and … the revenue that we’re going to receive based on the number of meals that we provide.”

The state will reimburse about $3 a meal that’s provided but mandates that the staff not be decreased in accordance with need, Hamilton explained.

Lamont’s order also preserves student transportation services so that those services still have their staff members when school resumes, Hamilton said. “We are expected to renegotiate those contracts such that we’re only being charged for the actual and reasonable cost of sustaining wage and health insurance payments for active employees. … we’re going back and talking with those providers about getting credits for things like gasoline that isn’t used, and so forth, on those contracts.”

There are likely to be cost savings on substitutes, outside tutors and possibly coach stipends for spring sports, Hamilton said. Extra duty or work for afterschool functions and overtime aren’t an issue and there should be savings on athletic transportation. The utility costs will be down because the buildings are closed, but that’s modest because it’s the end of the heating season. There are savings on discontinued trash pickups and savings in mileage.

There may be additional Special Education expenses, he said.

NPS Chief of Digital Learning and Development Ralph Valenzisi is handling online meetings because the City couldn’t find anyone to do it, Hamilton said. The Chromebook distribution cost about $415,000 and the building sanitations cost $600,000.

Mayor Harry Rilling said this would be paid by the City’s Rainy Day Fund. Rilling has said State or Federal reimbursement may be possible, according to Hamilton.

The 10 temporary tents for the food distribution sites cost $20,000, cleaning supply expenses may go up and preschool tuitions are being refunded, Hamilton said. NPS has needed to provide cell phones “in a handful of cases,” the IT Department has overtime and the learning packets being delivered to elementary school students is costing $15,000-20,000 a week.

All in all, he’s not ready to announce the overall cost of the pandemic during this school year, he said. “The objective is to try to come back to you in at your next meeting with some estimates here.”

School buildings that wouldn’t be used for months were sanitized?

$600,000 to sanitize the inside of Norwalk school buildings? Why??? The virus is spread from person to person. Any virus germs that land on solid surfaces eventually die, depending on the type of surface material. Some within several hours, 24/48 hrs, with the longest life prediction at 5 days. So the BOE/NPS close the schools and send staff & students home. They place all school buildings off limits denying access. They hire a company to go in and sanitize them all for $600,000 and the schools have been sitting empty ever since………some 28/35 days. In all seriousness, am I missing something here, or have I overlooked anything? I’m all for and all in when it comes to protecting the health and well being of our students & staff. But what was the driving force behind sanitizing the buildings after they were shutdown and to be left unoccupied for weeks? What company was hired to do this work? What was their scope of work? Who from the central office overlooked the work and accepted it as complete?