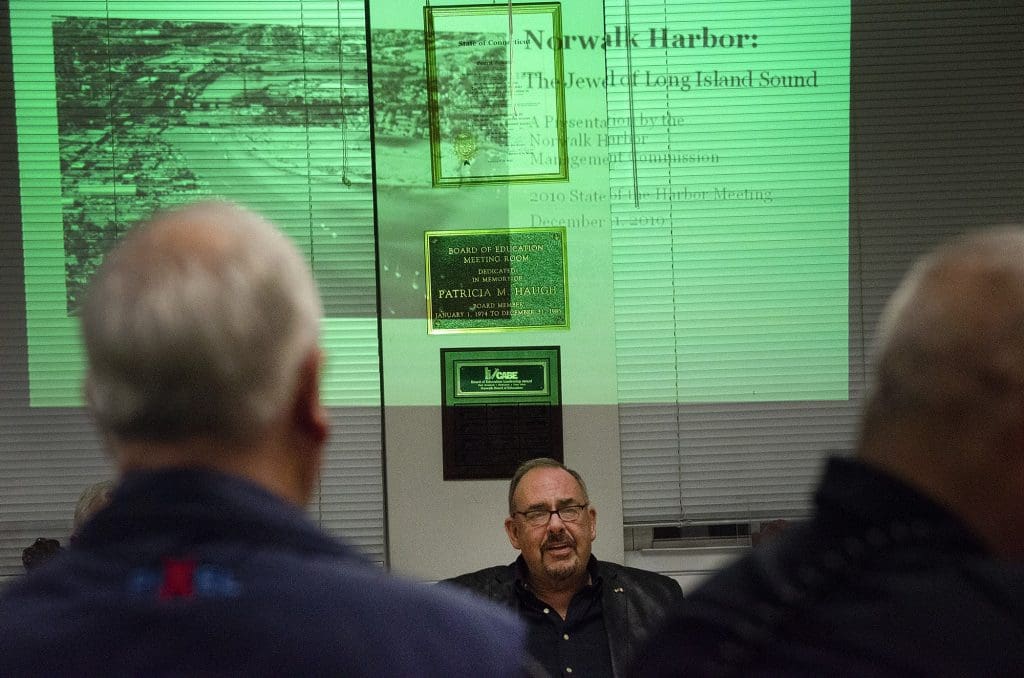 “Although we may have political affiliations, this is probably the most apolitical group in the city of Norwalk, because all of us share a vested interest in our love of the harbor,” proclaimed Chairman John Romano during his opening remarks.

Mayor Harry Rilling’s keynote address focused on the Walk Bridge project. “There’s been questions on transparency,” he said, “There’s been questions on DOT taking advantage of the City, but we have a really good working relationship with the Department of Transportation, and we meet on a regular basis. We did have some struggles at the very beginning when things were happening that weren’t being brought to our attention, but we reached out to the Governor, we reached out to the commissioner of the Department of Transportation and said  ‘Look, you have to do a better job of keeping us informed, working with us and making sure that we do everything we can to mitigate the impact that we’re going to have on our city.’

“Things have gotten a lot better.  Vanessa (project architect Vanessa Valladares) is right on top of things, and my staff meets on a regular basis with ConnDOT, making sure that we’re kept in the loop for virtually everything that’s going on.”

Rilling predicted that the bridge replacement work will start in late 2020 and will last for about five years.  “They’re going to be constructing the replacements upstream, and floating them in on a barge…It’ll be the least disruptive that it could possibly be.”

NHMC is urging the DOT to establish water quality thresholds, mandate 24/7 monitoring of conditions, and ensure suspension of operations if thresholds are exceeded.  Discussions are progressing with a cooperative spirit according to Romano.

The need was expressed for a meeting with Eversource to discuss the relocation of electric power lines currently situated atop the soon-to-be-dismantled bridge.  NHMC and the Shellfish Commission are bent on ensuring that Eversource’s plan won’t impede future improvements to the recently-upgraded Boating Center at Veterans Park, where more than 3,000 trailered boat launches occur annually.

As for boating safety, Marine Police Sgt. Peter LaPak reported that the number of calls to his department requesting service rose from 240 in 2018 to 350 in 2019, adding that “we expect to be even busier next year.”  LaPak attributes the surge in calls to both a spike in the number of boats, and to an unprecedented influx of rowers.  Harbor Master Sgt. Gregg Scully remarked that three newly-installed speed buoys have reduced speeding in the harbor.

The David S.Dunavan Stewardship Award was presented posthumously to Commissioner Henry S. Palau, a revered civil servant and avid boater who passed away in his Bell Island home this past October at the age of 90.  His son Mark Palau accepted the award.

Harbor user fees (in addition to existing mooring fees) will be instituted by 2021, stated Romano.  Various mechanisms for collecting the new fees are under consideration, he said.

NHMC input was embedded in Norwalk’s newly-updated Plan of Conservation and Development (POCD) according to environmental consultant Geoff Steadman.  During a presentation titled “Norwalk Harbor: The Jewel of Long Island Sound,” Steadman declared that the NHMC document “City of Norwalk Coastal Vision” was incorporated into the POCD, along with other NHMC recommendations.

“We have the best harbor anyplace!” exulted Chairman Romano.