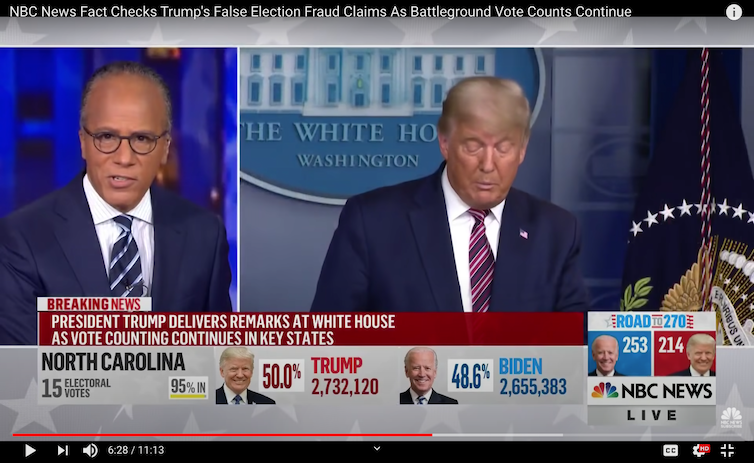 The moment Lester Holt of NBC News cut into a statement from President Donald Trump. (NBC News via YouTube)

When CBS, NBC and ABC cut away from President Donald Trump’s news conference at the White House on the evening of Nov. 5, they took pains to explain why they were shutting off the nation’s commander-in-chief.

It was a moment that for me, as a journalism historian, carried echoes of the 1954 takedown of another flamboyant populist demagogue, Sen. Joe McCarthy.

The key reason, the networks explained, was that Trump had made false claims about the integrity of Tuesday’s presidential election. As ballot counting signaled the increasing likelihood that he would lose to former Vice President Joe Biden, Trump accused the Democrats of trying to steal the election from him.

“They’re trying to rig an election, and we can’t let that happen,” Trump said.

The networks’ anchors criticized the president for peddling false claims to support his vanishing hopes for retaining the presidency. So did some of Trump’s staunchest allies.

An echo from history

Others have earlier drawn parallels between Trump and McCarthy, including journalist Peter Beinart, who wrote in The Atlantic that “McCarthy built his political career on demagoguery, intimidation, and a cult of personality – not tangible achievements or coherent ideas.”

McCarthy rose to fame and popularity by exploiting Americans’ fear of communism. He smeared his political opponents with accusations that they were communists.

As the news media later did with Trump, they helped create the spectacle of “McCarthyism” by providing McCarthy the means to make baseless charges against political opponents.

McCarthy exploited a key weakness in the model of so-called “objective” journalism: the practice of journalists to report what politicians say, without questioning whether what they’re saying is factual.

McCarthy “lied with such boldness that he distracted a nation and shot it full of distrust,” one writer said.

In 1954, the senator’s excesses were exposed. The U.S. Army accused McCarthy of seeking preferential treatment for one of his aides. During the televised Senate hearings, he charged that one of Army attorney Joseph Welch’s associates had ties to a communist organization.

An emotional Welch then responded by saying, “Until this moment, Senator, I think I never really gauged your cruelty or your recklessness.”

It was that moment from 1954 that I thought of as the news broadcasts cut away from President Trump.

“We have to interrupt here, because the president made a number of false statements, including the notion that there has been fraudulent voting,” said Lester Holt, the anchor of “NBC Nightly News,” as his broadcast cut away from the president’s speech. He added, “There has been no evidence of that.”

David Muir, anchor of “ABC World News Tonight,” was even more direct: “We’re not witnessing anyone stealing anything tonight.”

CNN and Fox News continued to broadcast the news conference but later reported that Trump provided no evidence for his claims of vote fraud.

[Deep knowledge, daily. Sign up for The Conversation’s newsletter.]

After Welch’s rebuke of McCarthy’s baseless claims, millions of viewers watching the hearings finally had enough of the senator. His immense national popularity disappeared. He was censured by Senate colleagues, ostracized by the GOP and – finally – ignored by the press. He died three years later, an alcoholic and a broken man, at age 48.

It is too soon, of course, to know whether Trump meets the same fate as McCarthy.

Chris Lamb is Professor of Journalism at IUPUI

Donald has gone full delusional. Staffers are probably trying to get COVID in order not to show up for work.Hopefully, the state of our nation will improve, but I have my doubts.

This reminds me when everyone said he was off the deep-end when he claimed that he was being spied on by our own agencies. How did that one end up?