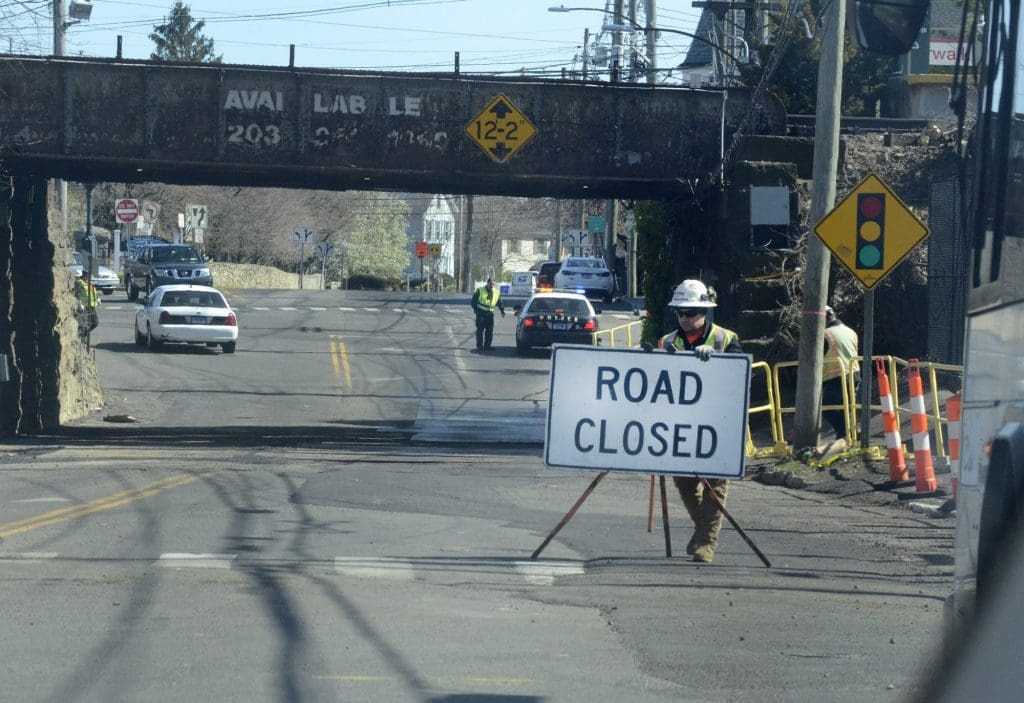 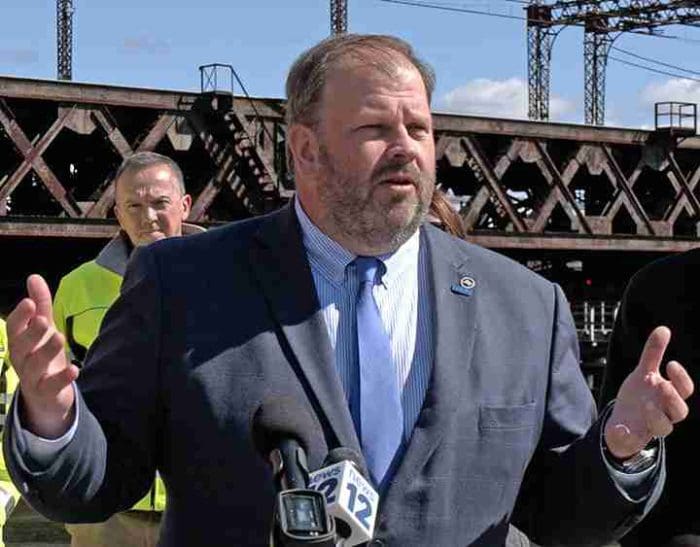 “This project is not only going to help the (rail) corridor between Boston, New York and Washington, 197 trains travel over this bridge every day. But it’s also going to help travel around Norwalk. And a lot of the work is being done right now. You don’t see it,” Mayor Harry Rilling said, crediting the engineers hard work and ingenuity for attempting to minimize Norwalk’s pain as the State works to ensure the rail corridor maintains its functionality for decades to come. 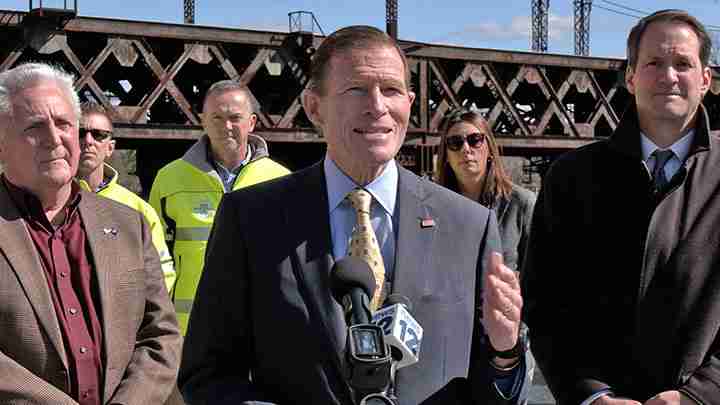 Blumenthal spoke of “an ongoing brawl in Washington” over infrastructure funding but called the Walk Bridge “a critical juncture, a connecting point for all of the Northeast Corridor.”

The overall project is expected to cost $1.6 billion, though estimates are tough to develop given escalation, inflation and supply chain issues, engineer Michael Mendick said. “We will be getting updated pricing towards the end of the year.”

It’s a seven-year project he said.

They’re “wonderful relics, still serviceable, but well beyond their intended lifespan,” Blumenthal said. “The objectives here are safety and speed, but also resilience and reliability. We need to improve the speed and safety of our commuter and our rail lines generally, the way to do it is to make sure our bridges work well and that people trust them. And that means replacing them when they have outlived their intended lifespan.”

He said, “The way that these projects will proceed, are intended to cause minimum disruption.”

“Minimal disruption is not zero disruption,” Mednick said. “There’s obviously going to be some impacts to local train schedules as well. But we’ve done immense efforts to coordinate those.”

He said, “There’s advanced utility work in East Avenue occurring right now, which is relocating and undergrounding all the utilities.” Next year, advance work for the Walk Bridge itself will start, with a “micro tunnel” going under the river to service power and signals. 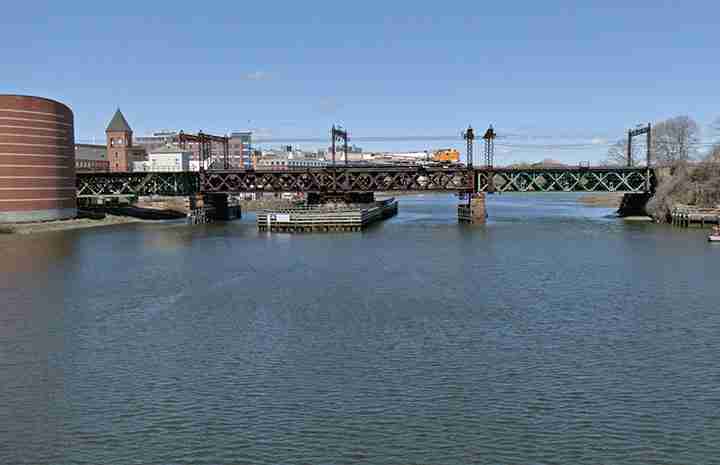 The Walk Bridge will be replaced in stages, two tracks at a time. “We’re trying to sync the outages,” Mednick said. The CP-243 project, a series of switches near Norden Place, is nearly complete.

“That advance work, which is behind the scenes is really paving the way to minimize those disruptions and provide all the operational flexibility that MetroNorth, Amtrak and all the freight railroads that run on this line every single day, will need,” Mednick said.

“This replacement program will not mean major disruption in the long term,” Blumenthal said. “It will boost our economy a lot of local contractors and skilled workers will be employed here. It will mean more jobs for more contractors and more workers but it will also mean a tremendous boost to Norwalk and to this work surrounding era. Norwalk will benefit. And the ripple effect economically, will be tangible and tremendously important.”

“This is a project of national importance,” Himes said. “If the rail lines between Washington, New York and Boston go down, it is a major economic blow, not to mention an inconvenience to thousands of people.”

Blumenthal spoke of sitting in a train somewhere between DC and New Jersey and listening to a conductor apologize for a temporary delay. “It’s the Walk Bridge that is responsible,” he said.

The $15 million is “just a down payment,” Blumenthal said. “…The federal government has to make these bridges work, because the entire Northeast Corridor depends on it. When the Walk Bridge goes down. The ramifications are felt down in Washington, DC and south.”

Looking at the picture, it must be election year. Wasn’t this proposed years ago?

Another photo op illustrating wasteful CT spending. An opening bridge replacement isn’t needed for the North River that sees very little traffic. In its closed position the current bridge works fine. Watch the trains speed through. Will the new bridge be named after the Governor ? Mayor ?

Monies much better spent to give Norwalk shinny new schools it doesn’t need. Or fix up our parks. Or even our shabby Downtown. Even better to build a 4 yr college in Norwalk where most school grads never secure 4 yr college degrees after getting a school degree that doesn’t meet CT Edu Dept standards. But Common Council, BOE members nor our Mayor see a need for a 4 yr college in CT’s only City without one.

Anyone calculate the economic cost of tearing up downtown for the new bridge ? No ?

Some history here. The “shallow stream” north of the rail bridge remains a navigable river on USCG charts. But that’s easily changed simply by City application to the USCG as Bridgeport did not to many years ago saving very serous monies in replacing an opening bridge with a fixed span. A local Congressmen volunteered to make the change in navigation status if asked. But City Hall never “asked”.

Years ago there were dreams about dredging the shallow stream north of the rail span aka “North River” to encourage major harbor development. Visions of multi-story condos with large docks and yachts. And using eminent domain to buy out a handful of commercial activities on our little used stream. Then it was pointed out by the late Attorney Tom Flaherty I recall that half the shore was “wetlands” and could not be built upon. So visions of a major harbor were put to rest.

The obvious question is why CT is so enthusiastic about replacing the current bridge for a much more ambitious opening bridge spanning a little used shallow stream ? Spending its estimated hundreds of millions for the privilege. Is there a bridge naming ceremony in our future ?

Another obvious question is who reimburses downtown businesses and residences for the substantial inconveniences and closings while the new bridge is in construction ?
And where are the “Greens” here. Some back of the envelop calculations suggest there’s major costs to our fragile downtown business community from expected street closings.
Not to mention additional pollution.

What’s most disturbing is City Hall remains silent on the bridge. But that’s how it goes in Norwalk. Where elected City officials or candidates never mention we ought do much better educating our kids. Or siting a 4 yr college here because most of our kids never secure 4 yr college degrees (see CT Edu Dept website). At day’s end the new bridge is a de facto referendum on how our City leaders view Norwalk. If CT officials want a new bridge then it must a good use of scarce CT taxpayer funds.