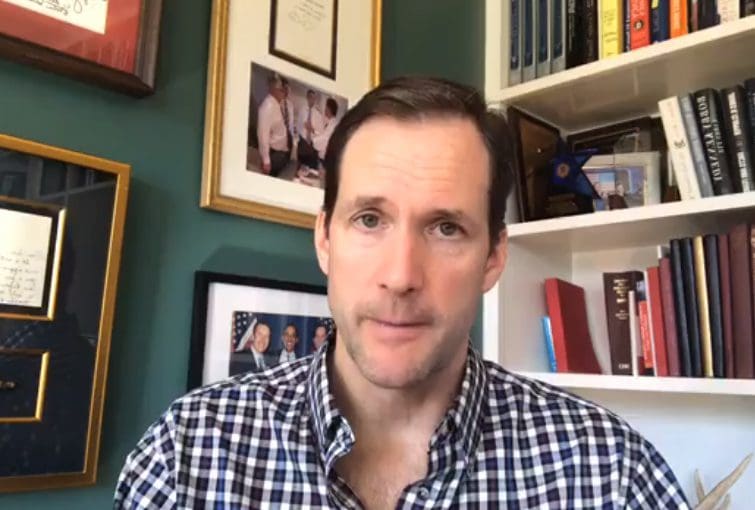 Washington, D.C. – Rep. Jim Himes, the laid back congressman representing Fairfield County, a coronavirus hot spot, has been forced to grapple with a crisis for which there is no political playbook.

With Congress out of session at least until April 20 and probably indefinitely, Himes (D-4th District), no longer follows a normal routine of meeting with constituents and lobbyists and commuting from his home in Greenwich to the U.S. Capitol.

Now he’s a virtual congressman, reaching out to people on Facebook and other social media, pleading for supplies from the federal government for his district’s hard-hit hospitals, and trying to steer his suddenly unemployed constituents to new federal programs that may be of financial help.

For Himes the coronavirus crisis is also personal. His kid sister is on the front lines of the pandemic as a doctor treating patients in Pittsburgh. “Tough as nails,” Himes tweeted.

His constituents are falling ill and dying at a faster rate than the rest of the state and most of the country. COVID-19’s special grip on his district has Himes scrambling to wrest protective equipment and ventilators from the federal government and to ask charitable organizations for help.

“We’re really running one step ahead of the tiger here,” Himes said. “Every day we get a few more deliveries of tests and personal protective equipment and a little more bit more ICU capacity, but every day we increase usage of all of those things.”

He said he and Rep. Rosa DeLauro (D-3rd District) were on the phone last week with Federal Emergency Management Agency (FEMA) Administrator Peter Gaynor “trying to make the point that there may be a political border between New York and Connecticut, but the virus doesn’t respect that.”

“We have half of all the fatalities in the state of Connecticut with 20 percent of population down here, that creates a lot of emotional turmoil and anxiety,” Himes said.

Himes also said “we have had a little more federal focus, but that focus has been slow in coming.”

Having learned the language growing up in Peru, Himes said he’s “speaking more Spanish than I usually do” to reach out to a growing segment in his community. “Latinos are being particularly hard hit in Stamford,” Himes said. “The Stamford Hospital CEO told me that every single patient that they’ve had to intubate comes from the Latino community. Isn’t that shocking?”

Himes said the Latino community in his district “is a hard one to reach,” especially since some of the community is undocumented and fearful of seeking help and others are concerned they will be seen as a “public charge” if they seek medical attention, hurting their chances of obtaining U.S. residency or citizenship.

He says the pandemic has brought “twin crises,” one health-related and the other economic.

“Despite the fact that people think we’re a Gold Coast, we have tremendous numbers of people  who are under a huge amount of economic strain,” Himes said. “Everybody who worked in retail and restaurants and any number of other jobs has been let go down here. It’s terrifying for people.”

To try to help with the economic strain his constituents are under, Himes, like other lawmakers, is trying to publicize the provisions in the CARES Act, a massive, $2 trillion stimulus package that increases unemployment insurance, provides small businesses with new forgivable loans and most people in the United States a $1,200 check, increased by $500 for every child in a family.

Himes said he’s used every outlet, including tele-town halls and mailings, to put out the word.

“We’ve been all over social media outlets I’ve never even heard of… I’ve never heard of Instagram Live or Twitter Live,” he said.

As far as the delays in receiving help from the CARES Act, Himes said it takes time for the federal and state government to set up new programs. “You can’t drop money from a plane,” he said. 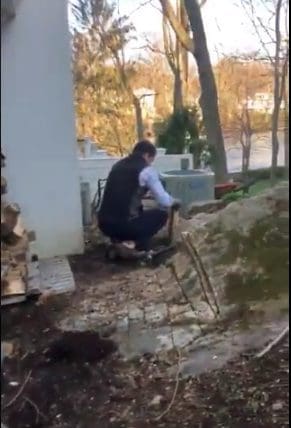 Himes splits wood in his back yard while listening to a congressional conference call. (Contributed)

He’s confident the $1,200 stimulus checks will be distributed “pretty quickly, especially to those Americans who have provided the Internal Revenue Service with their banking information.”

But Himes admits there will  be “a hard to reach population,” including seniors who have not had to file a federal income tax return.

Himes is known for his hobbies as well as for representing most of Fairfield County in Congress. He keeps bees, makes maple syrup – and mead.

In keeping with his penchant to take a different path and with his dry, and sometimes sarcastic, sense of humor, Himes recently tweeted a photo of himself broadcasting a conference call with fellow House Democrats in his backyard — while chopping wood.

We continue to feel extraordinarily grateful for our CT senators and representatives. They are tireless, articulate and caring.

Hope we stay “one step ahead of the tiger” since the tiger (or at least the one at the Bronx Zoo) already has Coronavirus!
Stuart Wells

Please keep your political comments to yourself during these times

Looks to me as if the first comment was political. What, no thanks to the President, VP and experts? Even the Mayor of Chicago and the Governor of CA have been appreciative.

Himes is a rich guy from Greenwich. What does he know about struggling?

Did Himes really use the word “Tiger”. Sounds racist to me

Strictly a political animal, that’s why the reference to the tiger!

Everything is political for him! No thanks to anyone, if they don’t agree with his political agenda.