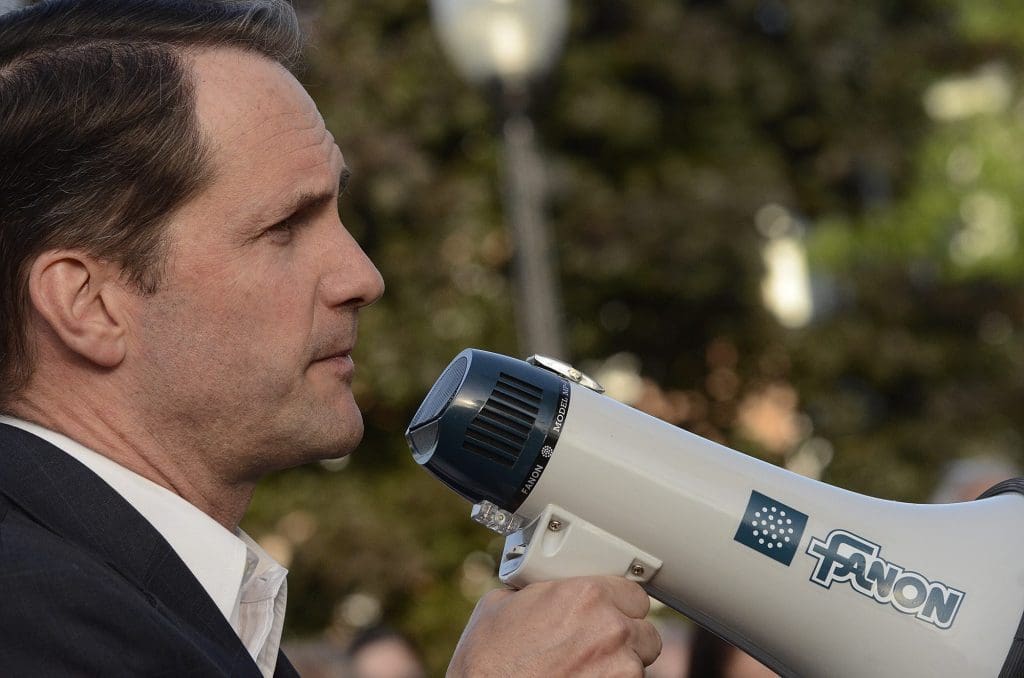 The effort to get the U.S. Government into the cryptocurrency market has a new proponent. On Thursday, U.S. Rep. Jim Himes (CT-4) issued a white paper calling on Congress to enact legislation that would establish a Central Bank Digital Currency (CBDC) for the U.S. Federal Reserve.

The 15-page paper makes the argument that, with an increasing interest in digital currencies and an ever-changing technological marketplace, the United States is behind other countries in establishing a federally backed currency of its own. Citing research from the Atlantic Council, Himes points out that the U.S. is behind many of our allies in developing a central digital currency — including Canada, Australia, and most of Western Europe – and well behind countries like Russia and China, who are among those already piloting their digital currency programs.

“Were the U.S. to lag in the development of a CBDC behind alternative reserve currencies such as euros, sterling, or yuan, additional pressure might be put on the dollar’s premier position,” reads the paper. Himes seems to see the establishment of a CBDC as important to the dollar’s continued role as an international reserve currency, though, in a conversation with reporters, he stated that he is “not sure this is a real thing.”

Also cited is testimony from Federal Reserve Vice Chair Lael Brainard, who argued “U.S. CBDC may be one potential way to ensure that people around the world who use the dollar can continue to rely on the strength and safety of the U.S. currency.”

In addition to concerns over U.S. competitiveness in global markets, Himes makes two additional arguments in favor of a U.S. CBDC. First, he believes that the use of digital currencies would promote innovation in existing retail payment structures, arguing that they are faster and more convenient than existing technologies. They might also be cheaper.

“The banks, and Visa and Mastercard, have built the rails on which a lot of the payment system runs and they charge dearly for it,” argues Himes. “It’s even more true when you talk about remittances … This would be a much lower cost option for somebody who wanted to send money abroad.”

Second, he believes that access to digital currencies would expand banking systems to the traditionally unbanked or underbanked since it would offer an alternative to standard banking.

“In my experience, Latino immigrants are deeply suspicious of banks because — whether you come from Colombia or Mexico or Brazil — a combination of inflation and the banking sector have been a way over many generations to lose all your money,” says Himes. “And as a consequence, Latino immigrants are disproportionately unbanked or underbanked. If you go to that community and say here is something that is backed by the full faith and credit of the U.S. Government, like a physical dollar, you may overcome some of those fears and concerns.”

But how would it work? Honestly, a lot like regular banking with one major difference: the currency would be a liability of the Federal Reserve, rather than retail banks.

That’s also what sets it apart from the current slate of stablecoins which already exist in the cryptocurrency market. Most stablecoins maintain their value based on cash reserves held by the issuing institution (some, like the TerraUSD that crashed earlier this year, operate differently). These stablecoins function as a matter of trust that there is, in fact, enough cash to back every coin issued. A U.S. CBDC would function the same way but would be backed by the institution that issues dollars themselves and carries the weight and trust of that institution.

A U.S. CBDC could bring legitimacy and stability to a market known for wild fluctuations. There are, however, trade-offs to using a federally backed digital currency, most of which come down to the reasons many choose to utilize cryptocurrencies in the first place: anonymity and transparency.

In both Himes’ proposal and the one written by the Fed itself, a CBDC would most likely utilize account-based, rather than token-based, transactions. This would require account-holders to verify their identity in order to process transactions. Identities and transaction records would be protected much like credit card and banking transactions are currently, and the government would be required to get a warrant to see them, but it would remove much of the anonymity associated with distributed currencies like Bitcoin.

“A CBDC is not going to be appealing to somebody who is privacy obsessed and therefore will only use cash,” says Himes, admitting that they would lose customers who hold distrust for the government and its adherence to due process. But, he argues, a CBDC would also be an unlikely currency used in illegal activity.

The white paper does not represent any specific planned legislation but Himes hopes that the Financial Services Committee on which he serves would be willing to begin the process of drafting it. Himes says he is optimistic they could start during the current Congress, even with the November mid-terms on the horizon.

“We can’t wait forever. We wait forever and we bicker and we’re not sure where we’re going, we’ll wake up and there will be a Euro CBDC,” says Himes. “We’ve always been a technological leader in this country and that would be a pretty good way to be a technological follower.”

Once digital, those who “control” the digital currency will know exactly what you’re purchasing and when.

In time, it will be regulated that if you purchase say a firearm, they will know or could deny the purchase outright.

Or, go to a liquor store, deny purchase.

Or, go for an abortion and be denied.

Only free open digital currency is an option

NEVER a government controlled currency that is digital.

CT-Patriot is being their usual paranoid self.

That said, even if this policy were harmless, it’d still be pointless. China’s not going to beat us because we lacked a Strategic Crypto Reserve.

Must have a lot of time on his hand.,

So we will take the US dollar which used to be backed by gold, until the gold standard was taken away and now its backed by nothing (a fiat currency is what its called).

So well then take the fiat dollar and turn it digital, making it even more fake.

CT-Patriot is correct, this would most certainly be abused by the elites to track every purchase and control the population, social credit style.

A free market digital currency is what the world not American only needs.

Bitcoin and others that are not under any government control is free market.

My guess is you like control of what you can or cannot due with your money.

Americans have always enjoyed cash or precious metals which they can freely purchase any item they choose and purchase anything in the world without any government involvement.

I am surprised that Mr. Himes has the time to consider crypto because he spends so much time on earmarks. The last batch he has submitted would gag a maggot. Typically, a Corrupticut legislator was behind the return of earmarks…thank you Rosa DeLauro!

I think this is illuminative for the audience.

Did I say a single word about “control”?

Look who’s the one obsessed about control. It’s CT-Patriot. Everything to him is about power and violence.

But for all his pseudo-philosophical sophistry about “freedom”, CT-Patriot doesn’t seem to know anything about the philosophy of government. The fundamental root of government power IS the state’s monopoly on the legitimate violence. There you go, there’s your control, your power, your violence. It’s NOT A SECRET, people! It’s right there, baked into the pie. The government says you can’t bash people over the head to steal their food, and it enforces that by bashing you over the head if you do it.

CT-Patriot wants you to think that the government seeks to control you, to rob you of your freedom.

My friends, fellow Americans, do we NOT live in the freest era of mankind’s history?!? Even including the present conflict, global war deaths per capita are at an all-time low. The world is the richest it’s ever been. Fewer human beings than EVER are victims of ills like famine and poverty.

And this was achieved in no small part with help from institutions like the Fed, the IMF, the World Bank, and the UN – despite how remarkably ineffectual they are!

Freedom is great. I love freedom. But it’s secured by our government. And that security requires certain basic forms of control: on violence, on money, on property. Yes, elites are always angling to rig the system in their own favor, but do you really think Elon Musk cares about controlling your daily life? Of course not.

People like CT-Patriot have been warning of dark conspiracies for decades, centuries even. The black helicopters are nowhere to be seen, except in… Ukraine.

I don’t even HAVE to get back for his wild allegations about my desire to “control” people by accusing him of compensating for deep-rooted insecurities about his place in the world by claiming to have special knowledge about a secret conspiracy. The proof is in the pudding: His worldview is a paranoid fantasy.

If Hitler were alive today, he would have absolutely loved digital currency. Heims would have received a promotion for this which is actually the single most dangerous proposal coming from what has become today’s fascist party.

So let’s see…weaponize the IRS (send them after conservative groups). Weaponize the Justice Department (Arrest people who have not committed a crime). Seize private property without a warrant (a la John Eastman, Project Veritas, and others)

Deny freedom of speech. (Start by creating a Ministry of “Truth”)

Take away the public’s right to defend itself (Start by instituting Red Flag laws.).

What could possibly be left? Oh, digitizing the currency to add that ultimate control. Speak out of line and they put a stop on your money. Keep it up and they confiscate it.

–Starting to see a pattern here?

It is absolutely imperative to vote these people out of power while we still have the the right to vote.

Gentlemen, we have not had a gold standard since 1933, which has not prevented the U.S. dollar from remaining the world’s pre-eminent currency. And the dollar is backed — by the full faith and credit of the United States.

Meritless Garland or “AG” fails to enforce laws unless it fits the Democrats narrative. Did he go after protesters at SCOTUS justices? A law with a felony charge. NOPE.

Has anyone in the DC gulag for January 6th who some were just trespassing get rights to a “speedy trial”? NOPE

Gee, gas was so plentiful and much cheaper ..what happened? GREEN NEW DEAL

Our economy is in a recession why? More control on finances, shipping etc.

Isn’t it odd that food processing plants catch fire or shut down? What about all the 1000 cows that “drop dead” from “heat”? That’s logically impossible

The whole “January 6 committee” with absolutely NO cross examination? REALLY? It’s a clown show to get people to ignore the real issues….Look over there.. squirrel….

If you think this is not a plan to control the narrative and now they want a “digital currency “?

Come on…next time you wear a face mask, it’s supposed to be BELOW THE EYES!

Yes, I’m a Patriot..member of SOR and mother DAR. Maybe it’s time to remember where we came from and how we got here.

Hers a link to a documentary about Chairman Mao which “illuminates” where the far left is trying to achieve right in out own back yard . Watch it please.