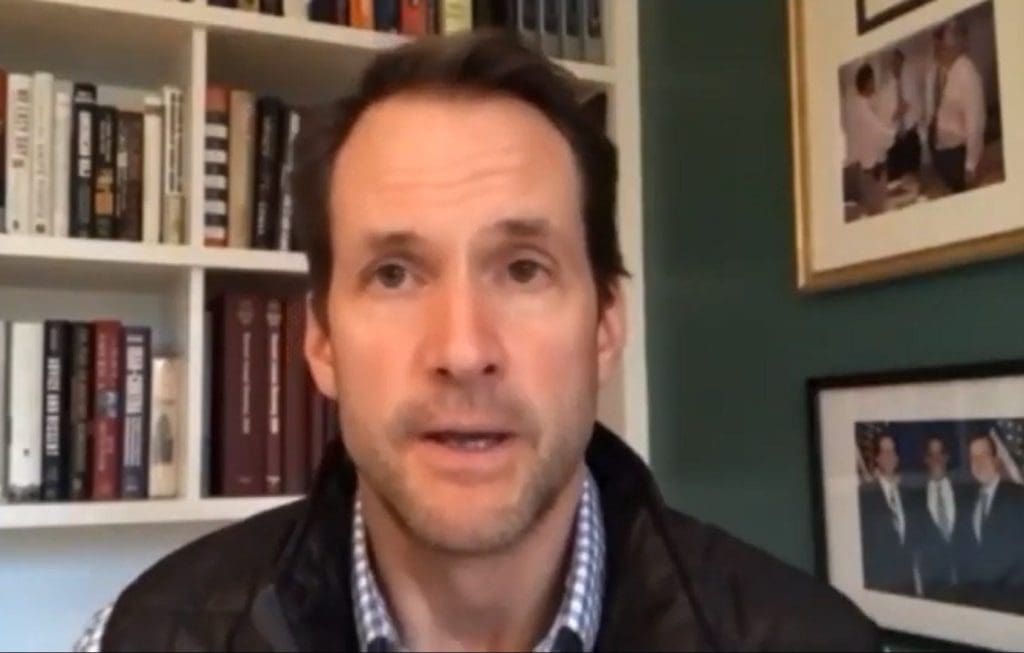 NORWALK, Conn. —Jim Himes on Monday let loose partisan commentary that he’s been holding back on, given the gravity of the COVID-19 crisis.

“I haven’t been advertising this, but you should be so proud of our party right now,” said Himes, U.S. Representative for Connecticut’s Fourth District, to Norwalk Democrats, explaining that Democrats, and led by House Speaker Nancy Pelosi, “have set aside all of our concerns, to be euphemistic, with this President, to work with Republicans, to work with the White House for which we have scant respect, to deliver an unprecedented response to a pandemic like we have never seen before.”

Video of Himes at end of story

Himes is up for reelection this fall for a seventh two-year term. Norwalk Republicans heard last week from two of three potential opponents to Himes.

“Jim Himes has to go because if the Trump President’s reelected what we’re going to be fighting is impeachment. Jim Himes is going to be one of the impeachment team. That’s the last thing we want,” said Michael Goldstein, a Greenwich man seeking the Republican endorsement for the seat. He agreed with others that Himes will be in line to become a Senator in two years when U.S. Sen. Richard Blumenthal (D-Conn.) retires. “…Let’s nip it in the bud. We’re facing some real challenges here, we’re facing the advent of social socialist views of the radical wing of the Democratic Party.”

“We have every communist – excuse me, I mean Democrat – offering everything under the sun, and threatening private property ownership,” said Jonathan Riddle, a Norwalker seeking the seat.

Himes on Monday said you would think that working to bail out hard hit Americans would be a low bar for public officials, but he’s now done it twice and 10 years ago Republican Senate Majority Leader Mitch McConnell said the number one priority was to prevent President Barack Obama from being reelected.

“Speaker Pelosi and the Democrats could have taken a similar tack with President Trump. And yet we did in a record matter of time, four weeks ago, we passed the CARES Act, a $2.2 trillion economic rescue package,” Himes said.

Phase II, a half trillion dollar replenishment of the CARES Act was passed last week, but “It took five months 10 years ago, five months to come up with a $787 billion stimulus program, the American Recovery Reinvestment Act,” Himes said. “…Contrast that to what just happened. Speaker Pelosi and the Democrats worked assiduously with the Republicans to get this rescue package done.”

“I’m not saying that what we did was perfect. We’re learning as we go,” Himes said. “But we have been working as hard as we can to try to get the economic resources out there to help individuals that help small businesses to help nonprofits to expand the unemployment insurance system.”

Republicans accused Democrats of playing politics with the stimulus package last week because Democrats worked to “make sure that some of this rescue money goes to the smallest of the small businesses,” hospitals and community health centers, Himes said.

But Democrats need to learn from this pandemic, and “be much better prepared,” and “not do things like under invest in the Connecticut Department of Labor,” which has been struggling with 40-year-old software as it works to deliver unemployment checks, Himes said.

The crisis has highlighted the inequities in the American system, the Congressman said.

“I’m talking about stuff that is that is about life or death right now,” Himes said. “The fact of the matter is when you look at the statistics, if you are African American or Latino or an immigrant, you are much more likely to die of Coronavirus than if you are not. Some of our people have good access to health care others do not. Students from affluent environments are working on expensive laptops doing distance learning. Kids at Norwalk Community College and some of our less advantaged kids don’t have that as an option.”

“Never, ever has had been so clear, as if it hasn’t been clear every single day since January of 2017, how important this November is. President Trump is beyond unfit to be President of the United States. He’s unfit to be doing anything in any position of responsibility,” Himes charged.

America wouldn’t tolerate the Mayor of a two-horse town suggesting that people be injected with disinfectant “and yet the President of the United States does that kind of thing on a daily basis,” Himes said.

As assets in his bid for reelection, Trump had an economy “he inherited from a two term Democratic President and a roaring stock market,” Himes said. “…And he had the usual bigotry.”

“My theory is that you can make Americans sort of cotton on to that (bigotry) for some limited period of time,” Himes said. “But in the face of a coronavirus crisis, which is all about our unity, and not just our unity as Americans, but our willingness to work with other countries abroad … I have enough faith in the American people to think that’s just not going to sell the way it might have sold in 2016.”

Answering questions, Himes said, “The other thing we’re learning that almost brings a tear to my eye, quite frankly, is that after three years of vilification of immigrants and of the undocumented, in particular of our President calling people who come to this country illegally ‘drug dealers and criminals,’ we’re discovering that they’re actually essential to providing us with food.”

If Democrats start with the moral proposition that “essential” workers should be treated “with the kind of respect that any human being deserves,” then immigration answers will fall into place, Himes said.

“Some of them are tough, right? We do need secure borders, we do need an orderly system of immigration,” Himes said. “If we start with that basic level of humanity, the output will be much more reasonable than if we start from where this President would have to start.”

Maybe he can show Will Haskel how to shave in a couple of years.

Seriously, could this guy name one, just one accomplishment during his failed 12 years?

Before this shutdown it would take up to 3 hours a day to commute across this 30 mile district which owns some of the worst infrastructure in the developed world. What has he done for this? Nothing.

He brags about the CARES act, neglecting to mention he failed at having it indexed for cost of living and proximity to hot zones. So the person in Kansas who might hear about someone with Covid someday living in a brand new 3000 SF home making half of what someone here makes will get the full stimulus, while you’ll be lucky to get anything except a huge property tax bill to pay for government which remained at 100% payroll plus raises.

All he has is the fake Lysol rage, nothing else besides presiding over the crumbling of our jobs and property values.

We need someone who can bring real infrastructure initiatives to this corridor. 12 years and an Impeachment pen are not getting it done.

Jim Himes is always partisan, nothing to see here.

Connecticut, one most highly taxed, expensive-to-live-in states in the U.S., with some of the highest State per-capita debt and Himes says that Democrats should “be much better prepared,” and “not do things like under invest in the Connecticut Department of Labor,” which has been struggling with 40-year-old software as it works to deliver unemployment checks…”

Yes, Mr. Himes, let’s continue to look to Connecticut Democrats to get us out of our fiscal calamity! The definition of insanity is doing the same thing over and over again and expecting different results.

Jim you and most of the democrats wouldn’t know unity if it fell off a building and hit you on the head. You can’t do anything for CT when your sole mission is to get rid of the president from day one. That is what you and almost every other democrat has put 100% of their effort into for close to 4 years now. You have done nothing else and you don’t deserve the position that you have. Try working for the people all the people not just the party for once Jim.

Nancy, Congressman Himes said you SHOULD be proud of your party

Hey Jim. Good for you. Did you read the nice little piece from Murphy yesterday?

Remember, as Speaker Pelosi once stated, in many areas a glass of water with a ‘D’ on the side win. So, congratulations to Norwalk and the State of CT. Wonder what the folks in PA, MI, OH are thinking?

In paragraph one, Mr. Himes was misquoted as saying we shouldn’t be proud. What he actually said was “you should be so proud.” Big difference!!

He couldn’t even shave?

Who is Jonathan Riddle and why is his idiotic quote in the article? Michael Goldstein? How about some context.

Please Jim spare us. You can shave and let go of the image of rolling your sleeves up and working hard. I am sure you are enjoying your cozy Greenwich residence.

One thing is for sure, federal relief money will be misused and abused.

Where have all the defenders of the democrat party gone. How is it that after 9-11, NY, NJ and CT were not well prepared for a pandemic? There was talk of the potential of bio-terrorism and that our government had it covered.

Last summer, I was driving on I-84 heading west from Danbury. A gent was driving his car which was packed up and had something like “Leaving what was once a great state” painted on his windows. It’s on my to-do list before the bottom entirely falls out. When our schools will have more ESL staff then Math teachers, that’s when it’s over

I met Jim Himes early in his Congressional career and I actually liked him. I told Jim you are one of the smarter people in Congress and even though you are new you have to stand up to Nancy on this”we need to sign this before we read this” Obama health care plan. Obama care was a start but there is so much room for improvement on what was eventually signed into law. He nodded like a bobble head and the rest is history. I actually thought he was listening and must have been hearing a similar message from other citizens.
Since then I am trying to think of a actual improved result for the people of Connecticut.Improving
Transportation should be a paramount concern for a Congressman you would think.

Commuting time from Westport to Grand Central has increased by 15 minutes.
If you are going to buy a house in Fairfield county your commuting time just went up a half hour every day. In Real Estate House Hunting Darien wins Westport loses.
Will Haskill was so excited to announce improved Wifi on trains so that every one can scream on line about how good their bagel taste.

Maybe Jim and Will can do a research project to uncover where all the Gas tax money actually went to besides infrastructure projects it was intended to go to.

@Mike O’Reilly – Himes and his buddy Schiff have spent the last three years trying to overturn the 2016 election. Did you really expect Mr. Himes to address the issues in CT that he was elected to address?