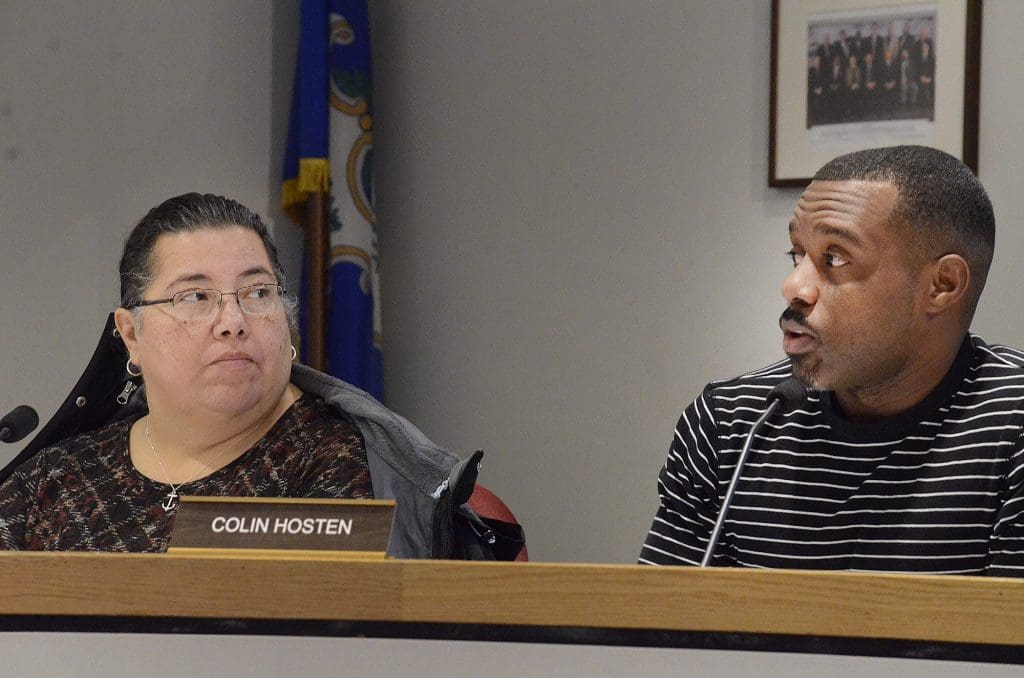 Norwalk Board of Education members Diana Carpio and Colin Hosten in February, when both had served less than three months in their roles. Hosten is now Chairman and Carpio is Vice Chairwoman. 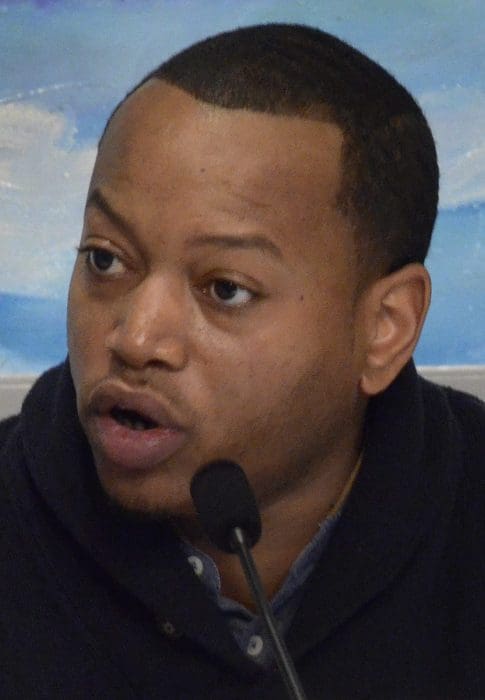 All three are entering their second years as BoE members. Carpio and Azima were elected unanimously, while Board member Mike Barbis cast the lone dissenting vote against Hosten.

The change comes one year after complaints of an “all-white” Board became null with the election of the three members now leading, as well as Sherelle Harris.

“It’s a great day in Norwalk to have a diverse Board of Ed at the helm,” Norwalk Branch NAACP President Brenda Penn-Williams said to NancyOnNorwalk, after the meeting.

This selection of new BoE officers also comes one year after perhaps the most raucous BoE meeting ever, as Penn-Williams summoned NAACP members – many from out of town – to pack the City Hall community room and call for Barbis to resign due to an incendiary profanity-riddled email that became public just before the election.

That led to Bruce Kimmel resigning just six days after becoming Chairman midway through what would have been a four-year term. LeMieux took the leadership post “temporarily” in December, then continued through the one-year term.

“Colin has been an incredible colleague this year. Very calm and diplomatic and inclusive in his work habits,” Meyer-Mitchell said. She listed his professional credentials as a writer, teacher, editor, two Master’s degrees and also called him a dedicated public servant, an “an incredible volunteer in the community,” who has led two homeowner’s associations and is vice president of the Triangle Community Center Board of Directors.

She also mentioned the year he spent as a Common Council member and on the Human Relations Commission.

There were no other nominations. LeMieux congratulated him and said, “I am very, very happy to pass the torch over to you.” She didn’t reply to post-meeting emails asking why she didn’t continue as chairperson.

“Since she has been on the Board, I have been consistently impressed with her thoughtfulness and with her diligence, and how methodical she has been in her approach to the work of being on the Board,” LeMieux said. “She also has a Bachelor’s in finance, which is very, very helpful to us as we move into budget season.”

“She has done significant fundraising and during this entire pandemic, she has been organizing for Norwalk mutual aid, and helping distribute food and necessities to people in need in our community,” LeMieux said. “So her dedication to improving the lives of people in our community is evident, and I think she is an excellent choice for the position of vice chair.”

Again, there were no other nominations.

Keyes nominated Azima. He’s served well as secretary, working collaboratively with her and LeMieux, she said.

“I believe Godfrey is a team player,” Keyes said. “… . I believe he brings understanding and passion to our equity work. Godfrey has a unique skill set that will suit him well to continue as Secretary on the executive committee of the Board of Education of Norwalk.”

“I think the three of you will make a dynamic team,” Keyes said. “…Also, I wanted to thank Godfrey and Sarah, the past year working, I think, working very collaboratively together and really a kind of a team effort. And I appreciate all the hard work that everybody has put in over the past year considering everything that we’re going through with COVID.”

She’s been on the executive team for 11 years, she said.

“Your commitment, and you know, things you’ve gone through simultaneous to those times – thank you, you know, is the least I can say,” Azima said. “The collective wisdom you allowed me to tap into this year will be missed. Our dynamic, me, you and Sarah, was great. You know, I’m confident that Colin, Diana and I will continue to carry that torch together with the Board.”

“We know that this these are positions of public service,” Hosten said. “We are accountable to our constituents. We are accountable to our students and our learning community. And we know that we and we hope that you will continue to keep us honest. And I think I speak for all of us when I say we’ve pledged to continue doing our very best to do what’s right by our schools.”

Penn-Williams said it wasn’t surprising that Barbis voted against Hosten, charging that it was because Barbis is a “well-known racist.”

“It’s unfortunate Ms. BPW only sees color. I see Colin Hosten as the mayor’s appointee versus a duly elected member of the Board of Education,” Barbis said in a late-night email.

The Democratic Town Committee placed Hosten on the Board of Education in December, on a 33-15 vote, to replace Kimmel.

Barbis alleged that the Mayor’s Office pulled strings to make Hosten chairman. Mayor Harry Rilling was not available for comment.

“I ended up voting for Godfrey as Secretary and Diana Carpio as Vice Chair.  I didn’t realize that was racist – BPW needs to quit making her unfounded allegations and needs to start doing her homework.”

This has been an intense year, and I’m really looking forward to spending more time focusing on my family. I’m confident in the new executive committee the board elected yesterday and happy to support them in every way.

Comments like “a well known racist” leveled against any person that dares have an opposing view really needs to stop. It only serves to foster a climate of distrust and anger.

It appears enlightened WOKENESS equates to shutting down those who don’t agree with the WOKE world view. This is bullying pure and simple. If you can’t see that than you don’t belong in public positions of power and influence.

Consider that these types of comments shut down productive public discourse and erode the very fabric of “our”, not mine, not your, not black, not white, not (fill in the blank), but “our” society.

Congrats to the new leadership of the BOE!
The BOE meeting referred to was the most disgraceful, disrespectful occurance I had ever witnessed in Norwalk. There was no reason why I should have had to sit through a BOE me3ting anticipating a possibe outbreak of violence at any time. The chair should have called for order and if not received emptied the room of guests or adjourned the meeting.
Mr. Barbis suggested Ms. BPW sees only color. I disagree. She seems to see only black which is the absence of color. Someone who knows her better than me shpuld suggest she get rid of her black and white TV and get one that shows all the magnificant colors and wonders of the world.
It’s time to stop pinning labels like racist on anyone who disagrees with us.

Is there any evidence to support Mr. Barbis and his claim? Just because someone says it doesn’t make it true.

Thank you to Colin Hosten, Godfrey Azima & Diana Carpio for stepping up and volunteering to take on these executive positions on the BOE! I’m excited to learn more about you, to see your work on the BOE, and to see you work with Dr Estrella! Thank you!!

Just know that many folks out here are sick of the “well known racist” comments. We don’t publicly call people out for it. If MsPW was so concerned about racism aimed at blacks, she’d be campaigning for Norwalk not being a sanctuary city.