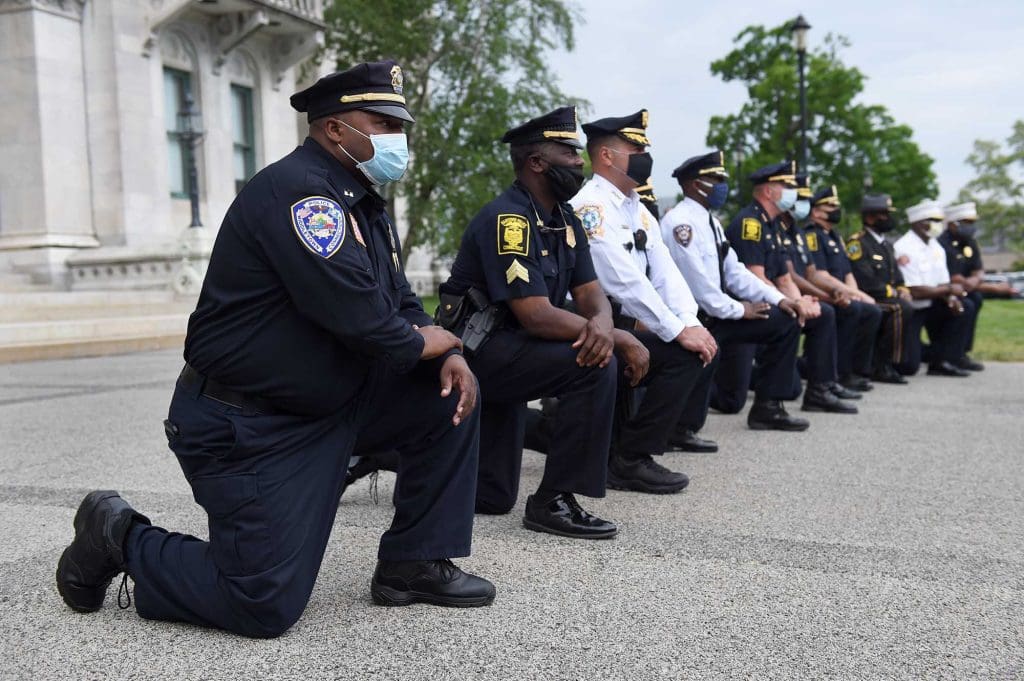 Police chiefs from across the state take a knee to show solidarity with mourners at a mock funeral at the state Capitol for George Floyd who was killed by Minneapolis police on Memorial Day. (Cloe Poisson, CTMirror.org)

The House of Representatives unanimously passed a bill Tuesday that would delay changes mandating when police can use deadly force.

“We put our police officers in harm’s way every day, and they need clarity with respect to the use of force policy in the state,” Rep. Steven Stafstrom, D-Bridgeport and co-chair of the Judiciary Committee, said shortly before the vote Tuesday. “But at the same time, we also have to recognize and not forget that call for change we have all heard so loudly, and continue to hear, and reduce as much as we possibly can the use of instances in which deadly force is used to take a life, particularly in our Black and brown communities throughout the state of Connecticut.”

Legislators narrowed the circumstances in which cops can use deadly force in a wide-ranging police accountability bill passed over the summer in the wake of George Floyd’s death. Stafstrom said that the minor “language tweaks” in the new bill do not undermine the law but rather strengthen “the legal framework that governs use of deadly force.”

Members of the law enforcement community asked the Judiciary Committee to delay the changes to the use of force law — which are slated to go into effect April 1 — to Oct. 1, 2022, to ensure all police are trained on the new standards.

The bill the House voted on Tuesday will push the implementation date to Jan. 1, 2022. Stafstrom said the new use of force statute needs to go into effect as soon as possible, and the Jan. 1 date strikes the balance between allowing the police officers to be fully trained on the new law and kicking the can too far down the road.

“The move of the effective date will improve outcomes, allow for additional training, and hopefully reduce instances of the use of deadly force by police officers in our state, with the benefit of the mandatory training that has been put in place by the [Police Officer Standards and Training] Council,” Stafstrom said.

Republicans seeking to make broader changes to the police accountability bill have been rebuffed by the Judiciary Committee co-chairs, who are open to making minor changes to the summer’s landmark legislation but not overwriting broad swaths of the new law.

The narrow legislative fix received bipartisan support, passing out of the Judiciary Committee unanimously on March 8.

Rep. Craig Fishbein, R-Wallingford and ranking member of the Judiciary Committee, reminded legislators of the danger of being a police officer, a career that can keep families on edge because they don’t know whether their loved ones will come home after their shift.

“We allow those individuals to wear a badge, carry a firearm, and in some cases tread on people’s constitutional rights,” Fishbein said. “Our job here is to create guidelines, guardrails for those officers to work within, to protect our communities, to protect themselves, but also to recognize the rights of others.”