Sen. Matt Lesser, who brought his son to the special session, says his fraught relationship with a House colleague seemed to cost him in a fight over the implementer bill. (Mark Pazniokas, CTMirror.org)

The House amended and passed the bill, 89-50, at 12:33 a.m., then formally closed its special session and left, leaving the Senate no choice but to accept the changes. Twelve hours later, the Senate grumbled a bit, then voted 20-6 for passage.

An ambitious data privacy provision that was a major policy initiative of Senate Majority Leader Bob Duff, D-Norwalk, was stripped from the bill in the House at the direction of House Speaker Matt Ritter, D-Hartford.

A more modest insurance measure favored by Sen. Matt Lesser, D-Middletown, co-chair of the Insurance and Real Estate Committee, also vanished from the implementer as it passed through the House — a likely consequence of a strained relationship with his co-chair, Rep. Kerry Wood, D-Rocky Hill.

At the insistence of Gov. Ned Lamont, bonding for the UConn Health Center for routine maintenance also was removed by the House. Major borrowing for UConn is outside the normal bonding process, but Lamont insisted that routine expenditures get executive-branch review.

The implementer bill started in the Senate, and House members said the version that hit their desks had items that went beyond what had been agreed to in negotiations.

The implementer is unlike other bills. 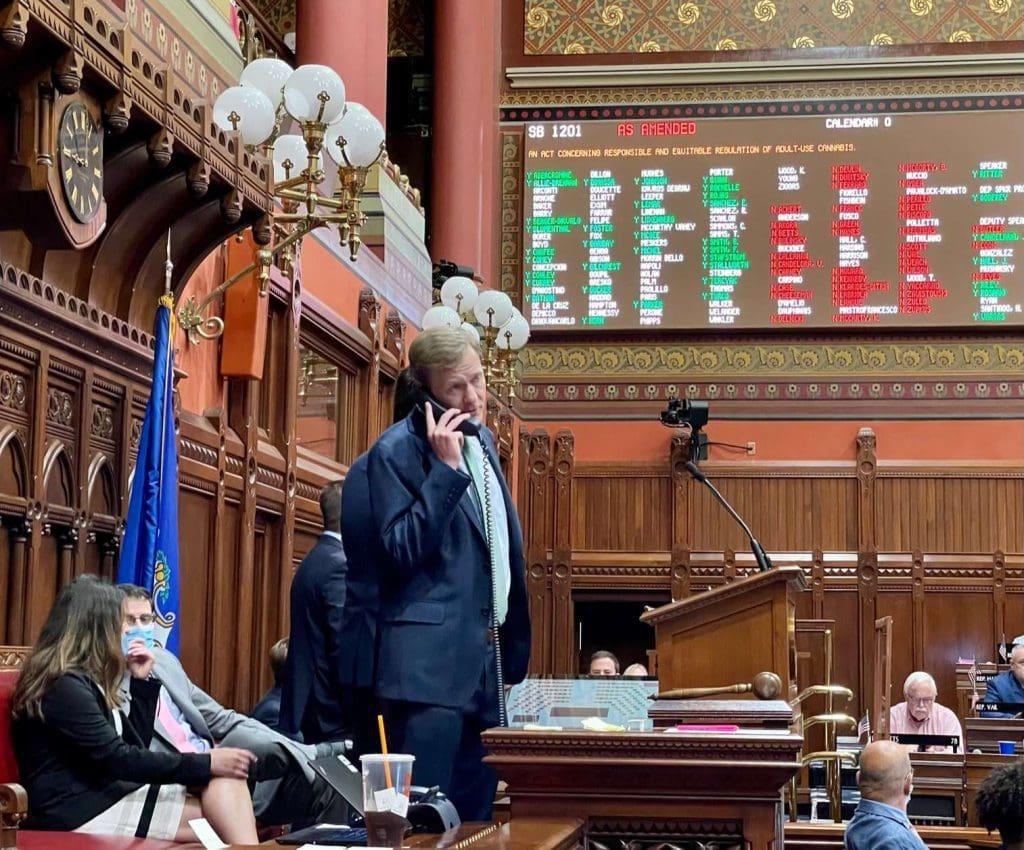 It is one of the few pieces of legislation that must be passed every year, meaning that getting a provision on board generally is a guarantee of it becoming law — even for items that have only a nominal connection to the budget and otherwise had no ready chance of passage.

The implementer is jointly produced by the administration and the House and Senate majority leadership, with input from committee co-chairs and other players. Any one of the three players theoretically can veto any provision, but the reality is they pick their battles.

Some items go on without question or challenge, especially if limited in scope.

A provision inserted by Ritter, for example, generated no debate. It at least temporarily exempts a crematory at Cedar Hill Cemetery in Hartford from environmental regulations, including stack emissions.

The crematory was established in 1983, before the adoption of a regulation requiring that such facilities be at least 150 feet from abutters. Cedar Hill wants to modernize its crematory, but it does not meet the buffer.

Once the administration and leaders sign off on the implementer, it is supposed to be bulletproof, immune from amendments.

The process means that Sen. Cathy Osten, D-Sprague, and Rep. Toni E. Walker, the co-chairs of the Appropriations Committee, are obligated to present and defend everything in the bill — even a deep cut to a state oversight board that both women oppose.

The Lamont administration had objected to $450,000 in funding for a small oversight agency —the State Contracting Standards Board. It had been added to the budget late in the process, and now Lamont wanted it deleted through the implementer.

The money was intended to allow the board, which now has only one full-time employee, to fill five vacancies.

On occasion, the rank-and-file rebel — as was briefly the case as Wednesday night bled into Thursday morning.

Not party to the crafting of the implementer, the Republicans are a wild card, free to seek changes on the floor. Aware of the Democratic lawmakers’ general support for the contracting board, Rep. Devin Carney, R-Old Lyme, filed an amendment to restore the funding.

Rather than using his own words to attack the governor, Carney sought Democratic support by quoting Osten, who had made clear her misgivings about the cut when the implementer was first debated in the Senate.

“I would quote the good Senate chair of Appropriations,” Carney said. “‘This came directly from the governor’s office. I truly think that this is a mistake. Because the board provides needed transparency and oversight.’ She said she thinks it wasn’t a question of money for the governor but of not wanting the oversight. And those are very discouraging words from a member of the governor’s party.”

Walker hesitated when she rose to respond.

“This is a hard one for me,” Walker said. “Unfortunately I cannot support it at this time, but I would love to have more conversation about this, and maybe we are going to be back here again.”

The General Assembly has a special session tentatively scheduled for the fall to determine how federal economic stimulus money should be spent, and Walker all but invited another conversation about the contracting board in the fall.

Carney’s amendment failed, but only narrowly, 71-69.

Max Reiss, a spokesman for Lamont, said the state’s contracting policies are transparent, and the administration considered the contracting board to be redundant. Osten and Walker signaled, however, they are unconvinced of that.

Lawyers had better luck protecting themselves.

Another amendment to delete language that would have eliminated the need for a lawyer at certain types of real estate closings did pass, 74-71. It was authored by five lawyers, three Republicans and two Democrats.

Lesser questioned why the House deleted a section that incorporated a consumer bill, passed unanimously by the Senate but never called in the House. It would have given parents of newborns more time to add them to their health policies, saving them from a surprise bill uncovered by insurance.

“I found that odd and dispiriting, because it doesn’t punish me,” Lesser said. “I’m not fighting a surprise medical bill.”

Wood, co-chair of the Insurance and Real Estate Committee with Lesser, said she played no role in its deletion.

“The implementer negotiations are at a different level,” Wood said, though she added that the budget implementer should be used for implementing the budget, not trying to accomplish what failed in the regular session. “I did my best on getting our bills done in the House.” 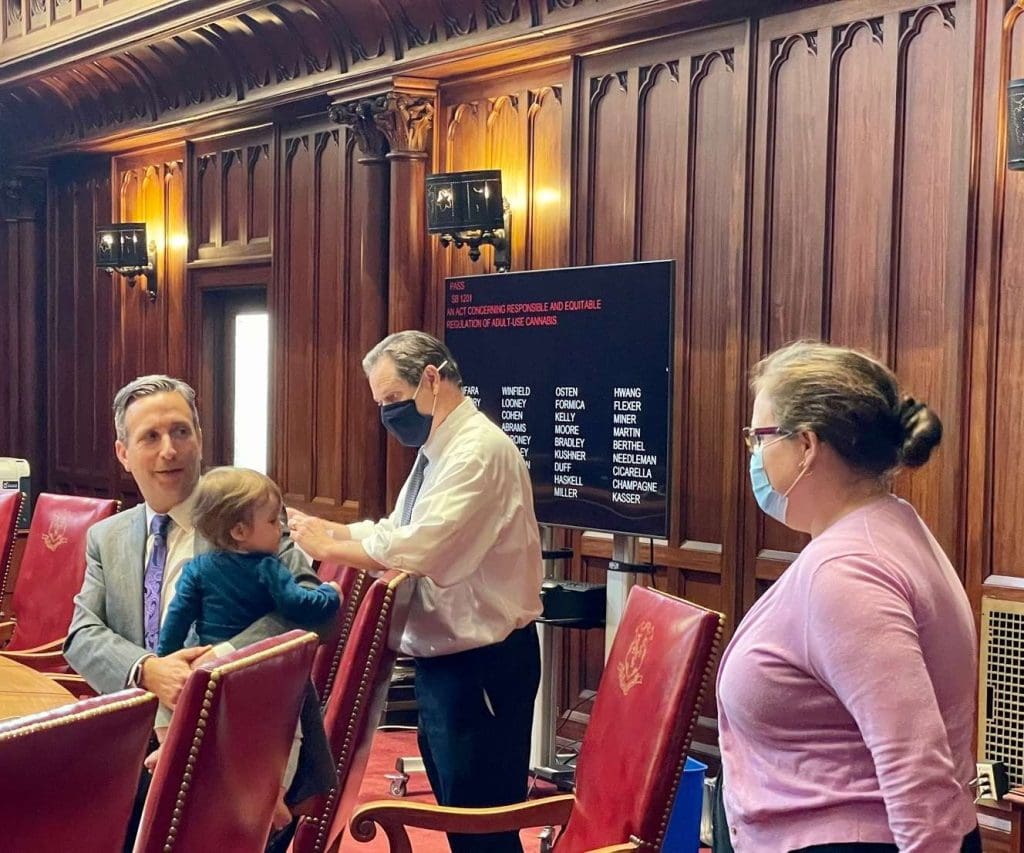 But the biggest change in the bill was the deletion of the data privacy section favored by Duff, the Senate majority leader. Modeled on a California law, the bill would have provided consumer protections against companies that collect and sell data, often gathered by the tracks people leave on the web.

The provision was taken from a Senate bill that Duff and Sen. James Maroney, D-Milford, co-chair of the General Law Committee, touted as a major consumer bill, but it never came to a vote in either chamber.

Duff presented the issue in stark terms: “The lobbyists win. The consumers lose.”

As is custom, Duff did not criticize Ritter or anyone else, but he did fault the House.

“It is so disappointing when the federal government can’t make rules for our nation, when here in the Senate we pass legislation that is strong, that protects consumers, then it gets stripped out of the House of Representatives in the budget implementer,” Duff said.

Whether the provision was added to the implementer without the consent of the House or the Lamont administration was unclear. One source said the administration declined to jump into a fight between the House and Senate.

Ritter said the privacy section was a well-intended but inadequate effort to address a complicated issue.

“My caucus did not believe that bill was ready for prime time, and I did not have the votes to pass it,” Ritter said.

He said the interests opposed included Connecticut hospitals. At a hearing, the Connecticut Hospital Association had complained the bill “puts at risk legitimate data uses that are important to healthcare and healthcare advancement.”

The Connecticut Retail Merchants Association also had objected in hearing testimony: “A uniform national privacy standard is needed, not a state-by-state approach.”

Duff said he will file the bill again.

Of course Duff will file the bill again. His mission to make the internet slower and more expensive has no end in sight. As for his concern for privacy? Does that extend to sealed court records? Or only those who don’t oppose him?