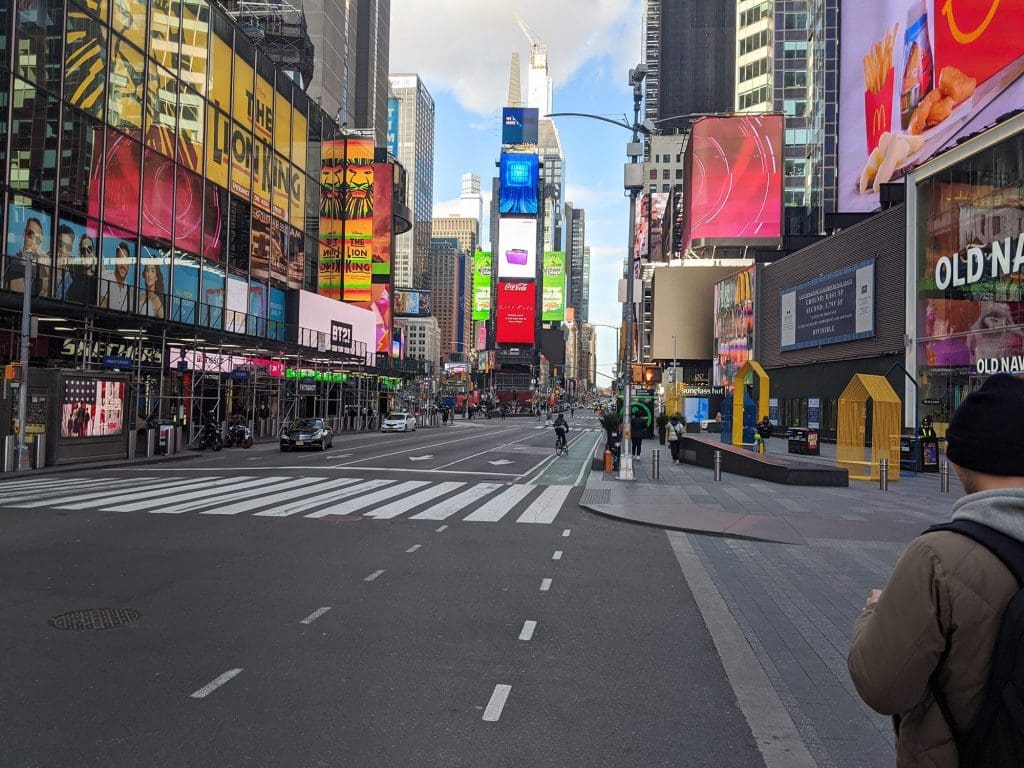 Times Square on March 22, deserted due to the COVID-19 pandemic. (Eric William Chapman)

Midtown Manhattan, a dense grid of office towers normally pulsing with activity, has been called a “ghost town” so many times that you’d expect to see tumbleweeds rolling through Bryant Park. Back in July, the New York Times declared that the commercial district was in a “purgatorial phase zero” of reopening, painting an evocative scene of a food cart vendor scanning empty streets for signs of life. Months later, things have not improved much. Occupancy rates on city hotels, like those in Midtown South tied to tourism and corporate travel, have plunged below 10%. And most significantly, the workers who once crowded sidewalks on their way to the office have stayed away. Commercial broker CBRE found that just 10% of Manhattan workers have returned as of Sept. 18.

Similar scenes of silenced streets are playing out in downtown business districts across the U.S. and beyond as the fall pandemic inches towards record infection levels. But perhaps nowhere does the mass abandonment of the office seem so viscerally real as the heart of Manhattan, where an entire ecosystem of businesses that rely on white-collar workers is threatened with extinction. It’s a situation with no clear short-term fix. In the longer run, however, some see an opportunity for the city to rethink the role of this workspace-laden swath of the city by converting idled office space into new residential projects, especially affordable housing.

It wouldn’t be the only neighborhood residential rezoning under consideration. In SoHo, Mayor Bill de Blasio’s plan to rezone to add affordable housing has hit pushback from existing residents who don’t want new high-rises. Brooklyn borough President Eric Adams, who is considered likely to run for the mayor’s office in 2021, voiced his support for the idea, as well as “rezoning neighborhoods like it.” Sara Lind, a candidate for city council on the Upper West Side, wants to rezone that wealthy enclave to bring in more affordable housing.

Such rezoning has been supported through city incentives in the past, says Paimaan Lodhi, senior vice president of the Real Estate Board of New York (REBNY): The 421-g program, a series of tax breaks for commercial-to-residential conversions, was launched in the mid-1990s to revitalize Lower Manhattan.

“Over time, you’ve had 9/11, the fiscal crisis, and the last Great Recession, and Lower Manhattan has grown exponentially,” Lodhi says. “Roughly 25,000 residential units have been added during that period. By converting Class B and C office space, 421-g turned a neighborhood dead outside of 9-to-5 working hours to become a true live-work-play neighborhood.”

A similarly conceived plan to transform Midtown Manhattan, Lodhi believes, could pay huge dividends if done right. (Unlike 421-g, he notes, an affordable housing requirement would be a necessity today.)

A large-scale transformation of office to residential properties isn’t unheard of: In the last decade, according to a RENTCafe study, a record 96,000-plus units nationwide have been created by transforming 778 schools, factories, offices or other nonresidential space into new homes, with 23% including units affordable to low-income renters. Turning old office space into new affordable units — located in an extremely transit-dense and job-filled section of the city — would be a boon to upward mobility in one of the least affordable cities in the United States. Lodhi points to East Midtown, the Garment District, and Flatiron South as ideal areas to focus on this type of residential renovation.

“They have a whole lot of Class B and C office space, no true live-work neighborhoods, and fantastic transit access,” he says. “That means more people walk to work, and a boost to economic development by creating more business for food-and-drink establishments and neighborhood retail.”

But any broad-based redevelopment plan requires not just zoning approval, via the city’s notorious difficult ULURP process, but the financing to pencil out. Turning office buildings to residential on a broad scale has worked best in cities such as Detroit or Toledo, Ohio, according to Robin Hacke of the Lincoln Institute of Land Policy. Manhattan office prices are still sky-high, despite the current coronavirus slump, and commercial-to-residential conversions work best when condos prices or apartment rents are skyrocketing, even as residential rents hurtle in the opposite direction.

Jonathan Bowles, executive director at Center for an Urban Future, told Real Deal that the strength of the pre-pandemic office market suggests the sector’s fundamentals are strong. Developers might not see residential conversions as a viable option without large tax breaks or a large drop in office prices if workers stay away for the long term, or both — especially as rents drop and vacancies rise. (Moody’s predicts a 21% drop in advertised rent for new commercial listings, a fall larger than the one felt during the depths of the Great Recession.) Even with the news of tech companies snapping up more than 3 million square feet of Manhattan office space this year, Lodhi expects the trend will shift towards smaller, more updated offices to facilitate semi-regular, face-to-face interactions, leaving plenty of lesser office space looking for a new lease on life.

Brenda Rosen is president and CEO of Breaking Ground, a nonprofit developer that transforms older buildings into affordable, supportive housing projects. The organization built its first project in Midtown Manhattan, a 650-unit former hotel at 43rd Street and 8th Avenue that’s “still going strong,” and has other buildings scattered throughout the neighborhood.

“The city won’t get its affordable housing count up unless it starts doing some of this work in high-income neighborhoods.”

Rosen’s first concern about residential conversion is funding; the city and state both face severe budget shortfalls, and the kind of programs and resources that might help these kinds of projects would be even more challenging without government support. Midtown office buildings also present many unique development challenges. Plumbing infrastructure is expensive to add, and older structures with large floorplates and small windows might require “reskinning” the outside. That’s why Breaking Ground tends to focus on hotel conversions: Many already have bathrooms, and occasionally kitchenettes, in each unit.

“We’ve approached landlords in the neighborhood who own dozens of older office buildings, and the amount of rehab needed to get them ready for residential use is a lot higher than hotels,” she says, noting that other nonprofit developers of affordable housing have been thinking about similar projects in the wake of the current downturn. “I think that it’s a buyer’s market and it’ll become more of a buyer’s market. The challenge will continue to be that the city and state don’t have a lot of money to put towards development. What other ways can we think outside the box and get to the same results?”

Lodhi agrees that costs can be prohibitive, but argues that a less-appreciated benefit of such a plan would be its potential to solve political problems over development. A long-in-the-works plan to rezone Industry City in Brooklyn’s Sunset Park neighborhood, which found developers pushing to expand an industrial district of warehouses and factories into a commercial and retail mecca, failed after community groups in surrounding working-class neighborhoods raised gentrification fears.

“Neighborhoods like that are pushing back,” says Lodhi, “and the city won’t get its affordable housing count up unless it starts doing some of this work in high-income neighborhoods, too. This king of rezoning and development in SoHo would be great due to the signal it would send. Imagine doing it in Midtown — you get affordable housing in an expensive neighborhood that’s not really a residential neighborhood.” Ideally, that means creating a walkable, 15-minute city without having to deal with the usual Not In My Backyard resistance.

What would the right incentive look like? Historical comparisons to 421-g suggest a blueprint, though it’s far from perfect. The program provided certain tax exemptions for developers, such as a 12-year exemption from the increase in real estate taxes resulting from the new work, and did end up creating thousands of new units. It’s been heralded as a key part of the downtown’s transformation, but questions remain about whether it was necessary.

“From an economic point of view, the question is whether or not they needed to provide that additional assistance,” says Mark Willis, senior policy fellow at the NYU Furman Center. “After it happened, it turned out to be a catalyst. It accelerated a change.”

However, many units that were supposed to be rent-stabilized during the exemption period were not; an analysis by The City found that landlords skirting that requirement cost New York $763.1 million in lost revenue.

Lodhi believes something like 421-g, with more strict enforcement and affordability requirements, could work. Traditionally, deferring taxes and collecting them later, when a property may be worth more money, could be a smart long-term investment, he says, and the spillover effect of construction activity and consumer spending in these neighborhoods adds to the benefit.

There could be an environmental win, too: Residential retrofits would bring scores of old office buildings up to the city’s strict new building code, resulting in a big emissions cut. (Many of the city’s older buildings still run on inefficient steam heat.)

But an even bigger question than how to formulate the incentive is how to stimulate new projects during a period of so much economic uncertainty. City building permits in the first half of 2020 hit historic lows, according to REBNY.

What seems certain is that the pandemic is contributing to a need to rethink and renovate certain property types. Willis guesses that cities will have less of a need for hotels and Class C office space. New York City, and other big cities, may have to rethink and reimagine the role played by business districts during a particularly tough recovery. And they may have to encourage developers to take creative risks.

“People aren’t willing to take on risk now,” Lodhi says. “That’s the big question mark. At some point people will come back and do projects in New York City, but I’m not sure when that’ll be.”

Courtesy of the Solutions Journalism Exchange.

The problem with this analysis is that it is 2 dimensional. The 800 pound gorilla is the logistics of elevator transport. No one is going to pay top dollar to share an elevator with 5000 germ carrying neighbors 2 riders at a time up and down dozens of stories. I’ve been told that a trip to the office now entails a 30 to 60 minute commute on the elevator one way depending on how many people are waiting to come down floor by floor where every car stops and closes without discharging the 2 passengers who have to stop at every floor to look at a long line of people waiting for an empty car. It’s over until the elevators are equipped with operators or sensors to run express when full.

@M Murray. As for returning NYC to the 70s, DeBlasio and Cuomo are hard at work. Crime stats are nearly there again and vagrants and homeless have moved back into the area. Squeegee guys are back and they just need to get a few peep shows opened on Broadway to put icing on the cake.

We can thank DeBlasio, Cuomo and probably a Mad Scientist in China for the resurgence of real estate prices over the past 9 months. I congratulate that trio for undoing in less than a year all the obstacles Bob Duff & Co have put in the way of revitalizing our property values over the past 20 years…Not to make light of our current pandemic, but as CT Dems take credit for reflating property values people need to remember the truth.

Murray, Meek, and O’Neill make a world of sense. NYC is toast for a long time