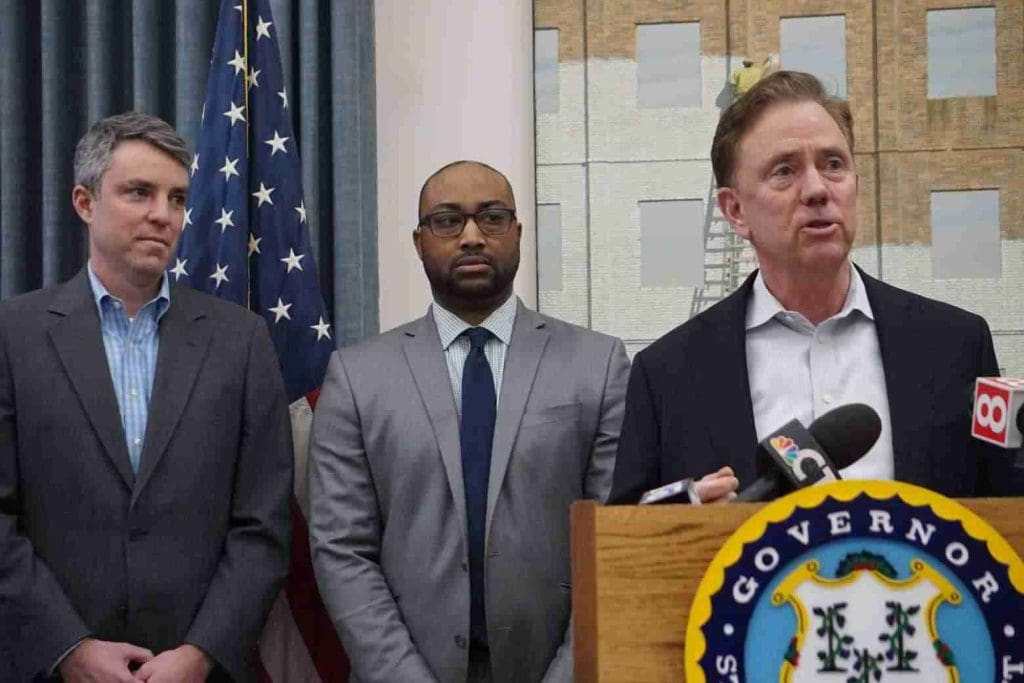 HARTFORD, Conn. — Konstantinos Diamantis, the former deputy secretary of the Office of Policy and Management now at the center of a federal investigation, has filed a grievance naming Joshua Geballe and Paul Mounds, two of Gov. Ned Lamont’s top lieutenants, and alleging mistreatment of his boss Melissa McCaw, among other complaints.

Diamantis was fired from his OPM position at the end of October after administration officials learned that his daughter, Anastasia, had gotten a job with Chief State’s Attorney Richard Colangelo’s office while Colangelo was pressing Diamantis to help secure raises for his staff.

Federal authorities are now investigating the state-financed reconstruction of the State Pier in New London along with school construction grants overseen by Diamantis in his dual role as director of the Office of School Construction Grants and Review, a classified job with civil service protections.

“This is an action to seek some measure of justice for an outstanding public servant who had the courage to refuse to turn his head the other way and keep silent,” attorney Zachary E. Reilands wrote in a 24-page grievance initially filed Nov. 28 on behalf of Diamantis and appealed Jan. 19 to the State Employee Review Board. 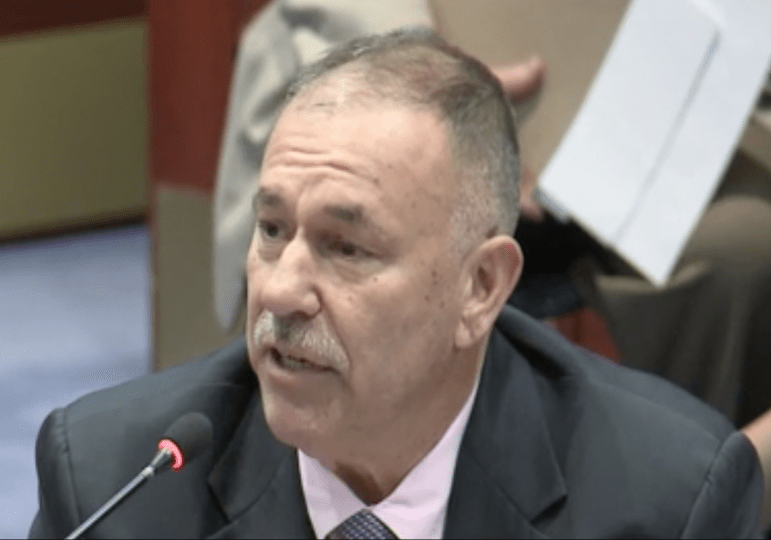 Both the grievance and the documents filed to support it are sealed, but the CT Mirror has obtained a copy of the complaint.

“[Diamantis] paid for speaking out against racial and gender injustice and cronyism by becoming the subject of Chief Operating Officer and Department of Administrative Services Commissioner Joshua Geballe’s and Chief of Staff Paul Mounds’ ire,” Reilands wrote, referring to allegations by Diamantis that OPM Secretary McCaw, who is Black, was treated disrespectfully by Geballe and Mounds.

The allegations in the grievance expand on comments Diamantis made in an emotional telephone interview with CT Mirror on the evening of Oct. 28, the day he was removed from his two state jobs.

Diamantis said his removal was the consequence of a long-simmering power struggle between top Lamont aides and the Office of Policy and Management, one of the most influential state agencies by tradition and statutory authority.

Request to rescind retirement was denied

The same day Diamantis was removed from the politically appointed OPM position, he was suspended with pay from his civil-service job overseeing school construction grants. Rather than accept the suspension, Diamantis retired.

But within hours of doing so, he tried to rescind his retirement. Geballe denied his request, according to the grievance, saying that Diamantis hadn’t resigned in “good standing.”

The grievance also states that Geballe refused to rescind the retirement because of Diamantis’ “unprofessional conduct,” specifically citing two “inappropriate text messages” Diamantis sent on the evening of Oct. 28.

The first, to Mounds, read, “I’m coming / The truth is coming / Liars will come forward / Racists too.”

Minutes later, he sent a text to Geballe that read: “I hate liars and racists.”

In response to questions from the Mirror the Lamont administration released the following statement Tuesday afternoon.

“As a result of a preliminary review into the hiring of Mr. Diamantis’ daughter by the Division of Criminal Justice, the Office of the Governor determined that Mr. Diamantis should be removed from his appointed position as OPM Deputy Secretary and placed on paid administrative leave from his classified position of Construction Services Director of Project Management for the Office of School Construction Grants and Review pending the results of further investigation. Rather than meet with representatives of the Governor’s Office to discuss the matter, Mr. Diamantis chose to resign and retire from state service. In light of the preliminary review by the Governor Office and the resignation by Mr. Diamantis, the Governor directed OPM and DAS to end the MOU in place and move the authority of the Office of School Construction Grants and Review back to the DAS. Mr. Diamantis subsequently asked to rescind his resignation and DAS denied the request. In response to that decision, he filed a grievance. DAS and OPM denied the grievance and the matter is now before the Employee’s Review Board.

“The State denies all allegations in the grievance and will vigorously defend its actions. Because the matter is pending, and the filings remain confidential, we will have no further comment at this time.”

Attorney Norm Pattis, who is representing Diamantis, declined to comment Tuesday. OPM spokesman Chris McClure did not respond to requests for comment from McCaw.

Subjected her to ‘humiliation’

Diamantis’ grievance is pending before the state Employee Review Board. The board’s chairman, Dennis C. Murphy, refused to comment when contacted by CT Mirror.

The board is part of DAS. In response to questions about the Diamantis grievance last Friday, DAS spokesman John McKay said, “Under legal advisement, we cannot comment on grievances.”

Documents show that Diamantis’ grievance has already been denied in two other closed sessions, before a DAS human resources officer and an arbitrator. The Employment Review Board is his last outlet under his state contract.

The grievance before the board was filed on Jan. 19, and Diamantis asked that it be kept confidential.

In his grievance, Diamantis alleges that Geballe and Mounds held a grudge against him for speaking out about the way they and other commissioners treated McCaw. (Geballe’s mother, Shelley Geballe, a lawyer and professor of public health at Yale, is a founding board member of the nonprofit Connecticut News Project Inc., operator of CTMirror.org.) 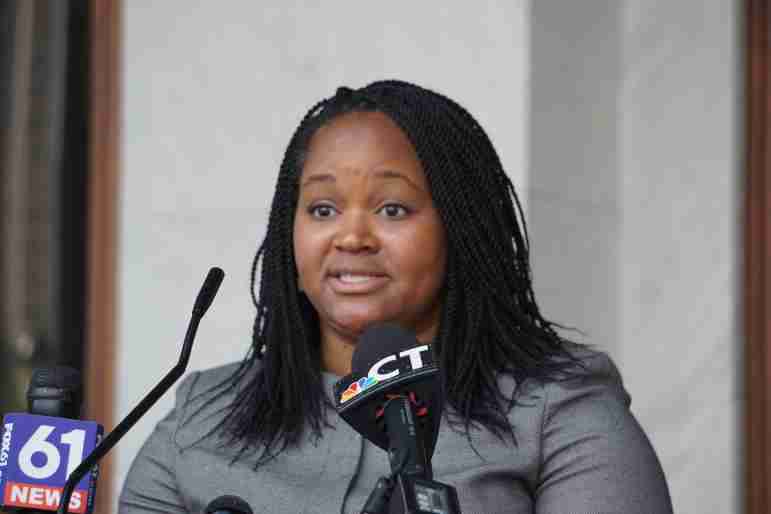 “Geballe was openly disrespectful to her as a result and subjected the first black and female Secretary of OPM to humiliation,” the grievance states.

Geballe’s treatment of McCaw led to “disrespect of the Secretary by other agency heads as the COO was leading by example. The OPM staff was very much aware that the COO’s efforts, unobstructed by the COS Mounds, was to emasculate OPM as the policy and management arm of the administration.”

Diamantis describes secretly listening, at McCaw’s request, to Zoom meetings with other commissioners and state officials so he could “witness the treatment she was receiving.

“The Complainant’s attendance in these meetings was not known to Geballe, and the Complainant personally witnessed Geballe’s openly hostile, condescending, and abusive treatment of the Secretary,” the grievance states.

The grievance describes another Zoom meeting among state commissioners where McCaw addressed an unnamed commissioner’s “abusive and disrespectful behavior toward the Secretary” and charged it “was rooted in racial discrimination/animus.” 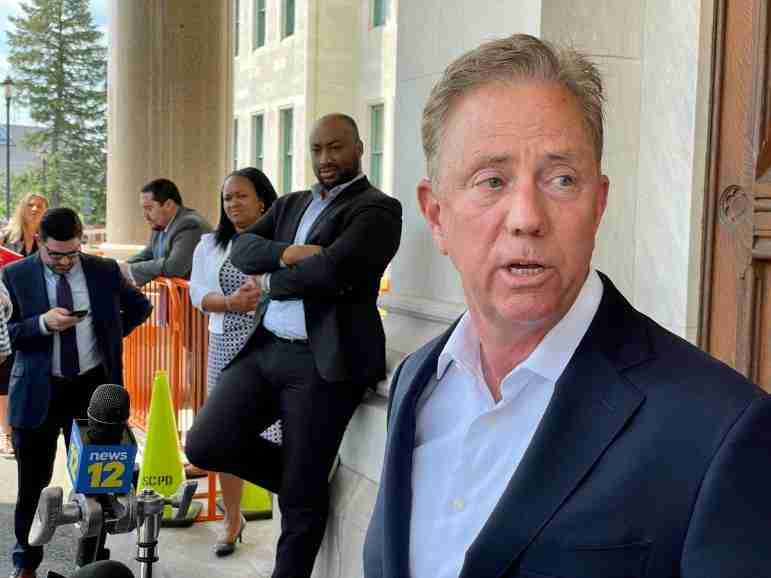 “The secretary respectfully expressed her discomfort with the treatment and requested that greater attention be given toward tone and professionalism in order to avoid making fellow employees uncomfortable,” the grievance states.

The document also describes an appearance that McCaw and Diamantis made before state legislators to discuss the budget, during which both were publicly berated by two unnamed legislators. Diamantis said he took aside one of the legislators he had known for years to admonish him for his treatment of McCaw.

“The Chief of Staff Mounds remained silent. Yet, it was the Complainant that Mounds admonished, not the disrespectful legislative members,” the grievance states.

Former DPH Commissioner Renee Coleman-Mitchell, who was fired in the middle of the pandemic in 2020, appeared on two radio programs in recent days talking about discord within the Lamont administration and suggested on WTIC-AM that it is “probably pervasive.”

In an interview on WRDC-AM on Friday, she spoke of “discriminatory bias” in the administration.

“There are a good number of, specifically, Blacks in [Lamont’s] administration … It doesn’t mean just because you have the numbers to reflect a certain population that that there isn’t ill treatment.”

She said Diamantis “made a clean statement on his way out, when he retired, saying he had never seen anyone treated in the manner in which his OPM secretary was treated by Joshua Geballe and Paul Mounds. But just because you have a diverse and high percentage of minority representation does not mean that there isn’t poor treatment and hostility.”

Coleman-Mitchell made similar complaints about “discriminatory and biased treatment” in August 2020.

Geballe announced on Feb. 1 that he is leaving state government for a position at Yale University. The next day, the Lamont administration revealed that a federal grand jury is investigating the state-financed reconstruction of the State Pier in New London and school construction grants overseen by Diamantis before he was fired.

Federal authorities subpoenaed DAS on Oct. 20 seeking records for state contracts for school renovations, hazardous abatement disposal and the new State Pier in New London, along with emails and text messages involving, among others, Anastasia Diamantis and the school construction company where she worked part-time. That company got $1 million to be the state’s on-call company for school projects.

The subpoenas specifically seek all of the elder Diamantis’ emails and text messages surrounding those projects.

News of the federal investigation came on the same day the governor’s office released a report on an ethics investigation into Colangelo’s hiring of Anastasia while Colangelo lobbied her father for help in securing raises.

Stanley A. Twardy Jr., a partner in the Day Pitney law firm and former U.S. attorney, was commissioned by the governor’s office to examine whether Colangelo’s hiring of Anastasia violated state ethics rules. Neither his inquiry nor his report dealt with the construction projects under review by the FBI.

In his report, Twardy questioned the truthfulness of Colangelo, Kosta Diamantis and his daughter, each of whom were interviewed about how Anastasia met Colangelo and learned of the position in his office. Anastasia Diamantis was hired as an executive assistant on June 11, 2020.

The documents also go into detail about Diamantis’ last day as a state employee — Oct. 28, 2021.

Diamantis said he was at the UConn Health Center with his gravely ill mother when McCaw called and asked him to come to her office. When he arrived, McCaw informed him that he was immediately terminated from his appointed position as OPM’s deputy secretary and that he was being placed on paid administrative leave from his classified position as director of the Office of School Construction Grants pending an internal investigation.

Diamantis had held the dual positions for nearly two years.

McCaw told him that the misconduct investigation pertained to his daughter’s hiring as an executive assistant to the Chief State’s Attorney and that it was an “improper quid pro quo” arrangement, in which the Chief State’s Attorney would receive approval of a beneficial salary action by OPM and his daughter would receive the executive assistant position.

Diamantis claims the combination of his mother’s illness, the accusations made against him and his potential termination left him distraught and emotionally compromised.

An hour later, he met with OPM’s human resources officer to discuss which retirement benefits and possible payouts he would be owed depending on whether he retired or was fired.

The grievance said the decision to resign “cannot be separated from the surrounding circumstances. He was distraught, confused and overwhelmed by the fact that his 25 years of public service had inexplicably unraveled in less than two hours.”

Three hours later, Diamantis asked OPM’s human resource director if he could rescind his resignation and submitted a letter to OPM officials asking to do so.

The next day, OPM officials asked Diamantis to come to headquarters and sign more documents, even though he was trying to rescind his resignation, the grievance states.

But that same day, Geballe denied his request to rescind his resignation, claiming that under state statutes Diamantis was not an “employee in good standing” and therefore wouldn’t be rehired. Geballe also cited Diamantis’ “unprofessional behavior” from the day before in sending the inappropriate texts to Mounds and himself.

The grievance also claims that Geballe did not have the authority to reject the request to have his resignation rescinded because McCaw was his direct boss.