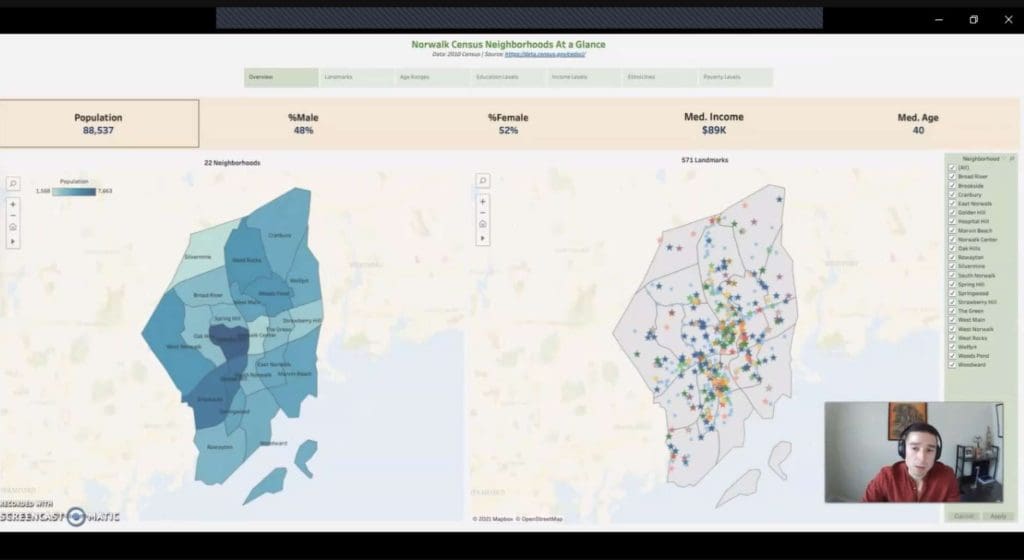 NORWALK, Conn. — Connecting data to the needs of the community and using it to drive the questions, find the challenges, and enhance new ideas and solutions. That was the main theme of Norwalk ACTS quarterly meeting on Tuesday, which featured the unveiling of two data dashboards — one on kindergarten preparedness and another on a breakdown of the Norwalk neighborhoods.

The different dashboards will be useful for all community partners, including the school district and policymakers, who can use the data to highlight needs and areas that need to be addressed, Norwalk ACTS Chief Executive Officer Jennifer Barahona said.

“This is tremendously helpful for those especially those who write grants, and (those who) are interested in kind of disaggregating by a whole number of ways of looking at how students are doing in our community,” she said.

That basic data point is one of a variety of indicators charted in the dashboard, all used by Norwalk ACTS’ Pre-K to Kindergarten Transition Initiative to measure how a student might be ready for kindergarten.

“This dashboard enables us to see all of the indicators for the entire kindergarten cohort,” said Paula Palermo, Norwalk ACTS data director.

For all three years, the incoming kindergarten class was approximately 30% under the age of 5 on Sept. 1, with about 70% 5 to 6 years old. 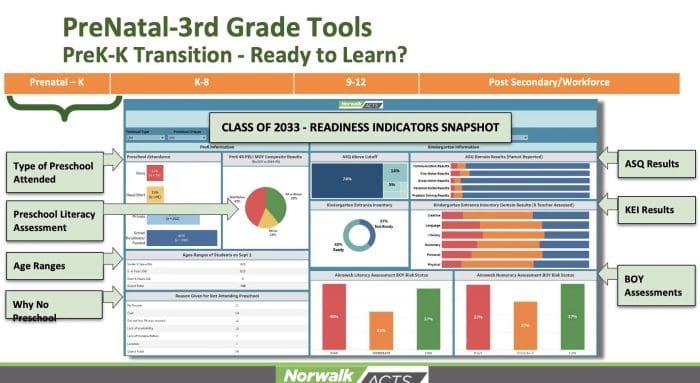 There are also more in-depth benchmarks, such as how students scored on the Kindergarten Beginning of Year (BOY) DIBELS Literacy Assessment Results. The assessment wasn’t given for the incoming class of 2020-21 due to COVID-19, but in 2018-19, about 54% were at or above the benchmark for kindergarten, 18% were below, and 27% were well below, while in 2019-20, 60% were at or above benchmark, 15% were below, and 24% were well below.

This comprehensive dashboard allows for an alignment between preschool and kindergarten teachers, Palermo said.

“By bringing together all of the data that we can collect on the incoming K students, we’ve been creating better alignment between pre-K and K teachers expectations,” she said. “What we found along the way is that the pre-k providers had an idea of what it meant to be ready for kindergarten. And then talking to kindergarten teachers, we found that their expectations were quite a bit different. So the work in the initiative has really been to try to bring that together.”

One of the challenges is that some of the assessments were not done due to COVID-19, which will throw off some of the trend data and student tracking over time, but one of the goals of Norwalk ACTS’ data dashboards is to see how students progress over time, Palermo said.

“Those students that weren’t in (or) didn’t go to preschool and typically weren’t ready for kindergarten, according to our measures did they catch up? Did they do kindergarten really well and then manage to maintain? Or did they start out at a disadvantage, and never catch up?” she said.

Those data points can help pinpoint where interventions or additional supports might be needed, Palermo said.

The second new dashboard titled “Norwalk Census Neighborhoods at a Glance,” is a breakdown of demographics and landmarks across 22 neighborhoods in Norwalk.

“We created this dashboard really for ourselves and for the community to get a better sense of the makeup of Norwalk and its neighborhoods, its landmarks, and the demographics of the people who reside,” Ray Leslie, data analyst for Norwalk ACTS, said.

The breakdowns also allow viewers to sort by landmarks, which include everything from bus stops to schools, libraries to COVID-19 services. Viewers also sort by two groups, such as seeing which bus stops are near childcare centers. These neighborhood maps were used to help set up food distribution sites during this past year, Leslie said.

Norwalk ACTS also highlighted some ongoing data work they’ve been doing in partnership with the Norwalk School District on disproportionality in the district, such as are some groups of students overrepresented in discipline or are other students underrepresented in the gifted and talented program? Palermo said that this dashboard was created using the work of Edward Fergus, Ph.D., of Temple University, who is conducting an equity and education initiative study here. 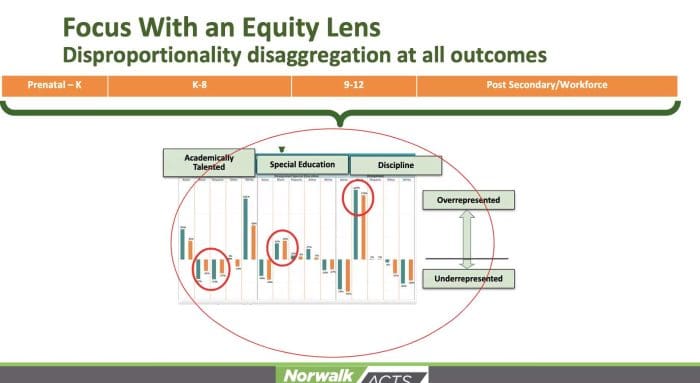 Information in a Norwalk ACTS dashboard.

“Basically, what we want to be able to do is start to really look at these numbers and see where the big red flags are,” Palermo said. “Obviously, Black kids are disciplined more than white, Black kids seem to be given higher special ed designations.”

Palermo said that Superintendent Alexandra Estrella has started to do some of the work in addressing these inequities, but it’s going to take time for those efforts to show up in the data points.

Putting the Data into Action

Denique Weidema-Lewis, manager of implementation and collaborative action for Norwalk ACTS, said the goal of these dashboards was to take the information and put it into action.

“I think the biggest piece is really, hopefully that today you’ve been able to really see how we’re trying to turn data into information and how that information is then turned into insight,” she said. “But that insight only comes from the community. So really, I think that as this conversation continues to move forward, we’re really looking to all of you to really help guide what this work looks like, where the priorities lay, and really, how do we continue to move this work forward.” 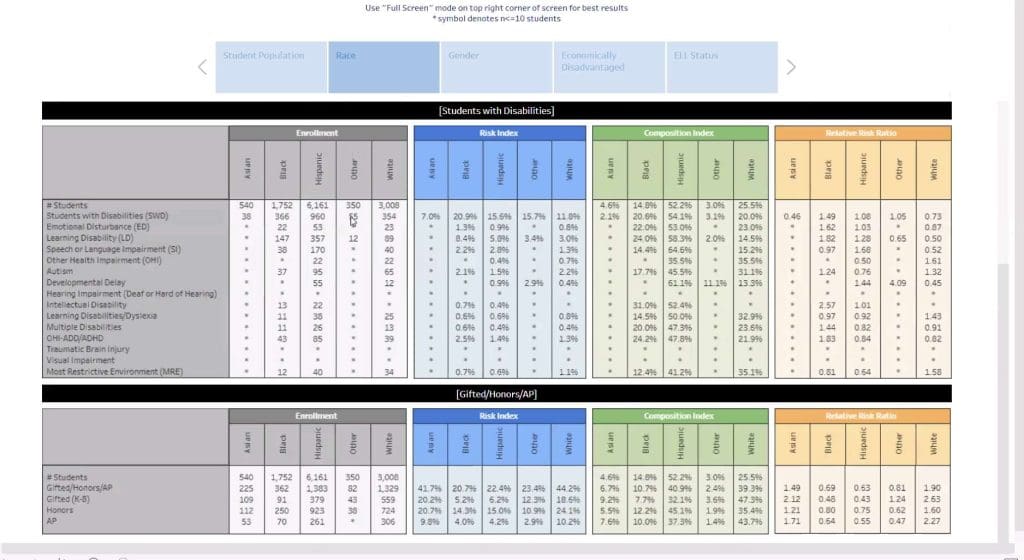 Information in a Norwalk ACTS dashboard.

Good stuff. Problem solving starts with valid, reliable data. The next steps are to evaluate the data and investigate possible solutions to the problems uncovered, implement those solutions and evaluate longitudinal data to learn the results of the action steps taken.
Great to see ACTS and the NPS working together on this.

Nice seeing some professionally made charts.

In terms of the data tying ethnicity to discipline, looking at a single variable, is something any social scientist of merit would avoid. What about adding in single parent Households, gender, income, test scores etc etc.

As someone who knows statistics, painting a picture of unequal treatment of students by arbitrarily quoting student population percentages and the corresponding percentages of discipline relative to the group is complete nonsense. How could you use a baseline of a student population percentage to draw conclusions on fairness in discipline? Anyone who knows anything about statistics, or even math, would understand that all it takes for the discipline % number to be skewed is one bad kid getting disciplined multiple times. This is true because I highly doubt that they do the extra work of backing out repeat offenders from the overall discipline numbers for that particular group to create what would be a more clear picture but still one that has flaws even at that point.

If you took that same logic and applied it to anything else, especially in a career where statistics matter, you wouldn’t be employed very long. This is essentially the exact same thing as someone saying that there are 100 kids in an auditorium for a presentation. For the sake of using round numbers lets say 15 are black, 26 are white, 52 are Hispanic and the remaining 7 are Asian. We now want to track how many times kids from a particular group interrupt the presenter. You then want to show that number in a percentage based on the overall number of interruptions, but relative to that specific group of kids. All it takes is ONE person acting out multiple times to skew the numbers massively and show disproportionate interruptions for any one group. This logic is race baiting plain and simple.

At the end of the day, these are kids plain and simple. Every single human being should be treated with the respect and dignity that they deserve. One bad kid from ANY group should always be disciplined if they are a continued distraction for the rest in a classroom setting. That said, using population numbers as a way to show unequal discipline for any particular group is astonishingly misrepresenting the bigger picture. If NPS wants to do a full study on equity in school in a way that shows the true nature of discipline for groups, then they should actually do the extra work of collecting the information needed to actually draw the bigger picture and come to a proper conclusion.

Racism is horrendous and everything should be done to eradicate it. Painting incomplete pictures using incomplete numbers for the purpose of race baiting is pathetic. How about we just say that kids who act out and don’t follow instruction will be disciplined?

Well said —— Someone who values logic.

What is the point of these ‘disproportionality’ studies? Is Norwalk trying to force equality of outcome for ethnic groups? That is pretty much impossible. We need to focus on equality of opportunity. And we need to discipline students when they act up no matter what racial group they are in.

@ Someone – Norwalk schools already have a defacto racial quota system on discipline, which furthers your argument. It’s baffling that schools actually thinks that helps kids..These policies are a disaster for kids long term.