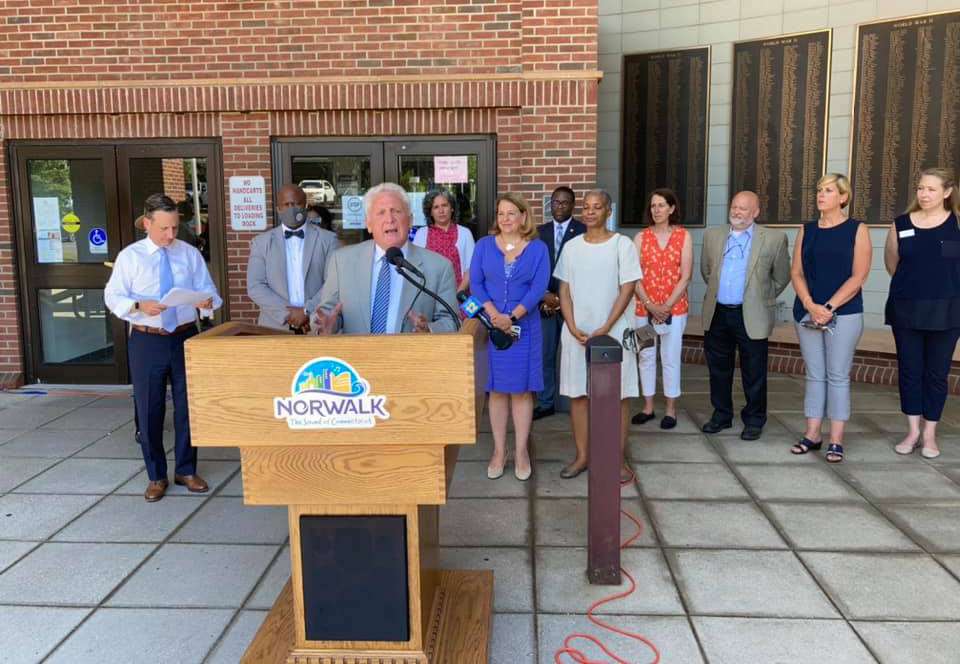 Norwalkers will see virtually no increase in their tax bills, as the Common Council and Board of Estimate and Taxation members factored the Federal/State aid into the local budget.

The $46.4 billion two-year state budget passed June 9 avoids major tax hikes, pumps huge new dollars into municipalities and social services and provides tax relief for restaurants and the working poor. The budget does not touch Connecticut’s record-setting $3 billion-plus rainy day fund, but it does rely on $1.75 billion in federal coronavirus relief grants to stay in balance.

It’s the first bipartisan budget vote since 2018: 22 out of 53 Republicans joined 94 Democrats to pass the measure 116-31 in the House and the Democrat-controlled Senate passed it 31-4.

The move leaves the state poised to deposit more than $1 billion in surplus funds from the outgoing budget into Connecticut’s cash-starved pension funds.

“The Education Cost Sharing Formula (ECS) accounted for $588,351 in FY 2022 and $1,176,702 in FY 2023 of the total increase. The bill maintains the phase in for growing communities, such as Norwalk, and builds on the revised ECS Formula passed four years ago by increasing the weight for low-income students and English Language Learners from 15% to 25%,” it said. “Additionally, priority school districts received an increase in funding in the budget, though the total increase to Norwalk is unknown at this time.”

Norwalk Public Schools has also received about $24.8 million from the American Rescue Plan, the third round of federal COVID-19 funding passed this spring. But while Duff touts the increased ECS funding and the “ESSER” (federal Elementary and Secondary School Emergency Relief Fund) money rolls in, Norwalk Superintendent of Schools Alexandra Estrella and NPS Chief Financial Officer Thomas Hamilton have criticized the City’s “flat funding” for the schools’ budget.

The City maintained NPS at its 2020-21budget level. Estrella and Hamilton have said they’re therefore forced to use COVID-19 funds to “supplant” regular education expenses and the schools’ Finance Department has been scrambling to assign the ESSER funds in a legally acceptable manner.

“The intended use of this grant is to reopen schools and accelerate learning and mitigate learning loss,” Hamilton said in May. “It allows (local education agencies) broad discretion in determining those needs, and encourages building long term systems of support to modernize and sustain improvements.”

Hamilton and Estrella have also repeatedly warned of a fiscal “cliff” when the COVID-19 money runs out but the schools’ expenses have grown.

This is also a warning heard on the State level, as, again, the new biennial State budget relies on about $1.75 billion in federal coronavirus pandemic relief to remain in balance, setting up a huge potential hole in state finances when that aid is exhausted in 2024.

Another top priority in the State budget centers on the community-based nonprofit agencies that deliver the bulk of state-sponsored social services in Connecticut.

The industry has not received a major funding increase in more than a decade, and the CT Community Nonprofit Alliance estimates that, after adjusting for inflation, compensation has effectively fallen by $461 million per year since 2007.

The new budget chops into that gap considerably, dedicating an average of about $105 million more per year over the biennium for these agencies.

But the budget stipulates that nearly half of those funds, about $100 million, must effectively be used to resolve a labor dispute involving unionized caregivers at group homes that serve developmentally disabled clients.

And, “State funding for local public health departments has increased in this budget over 63% from current levels,” it states.

“The bipartisan approval of the 2022-2023 biennial state budget sends a clear message to all of the residents of our great state – this is the most progressive, transformative, and life-changing budget our state has ever seen,” Gov. Ned Lamont said June 9, after the Senate vote. “We agreed across party lines that now is the time to ensure thousands of families have access to affordable childcare, the expansion of access to free and affordable healthcare will provide security to households, and investments in our future through workforce development will make our state stronger.”

Tax bills are set to go down slightly in most Norwalk districts but increase .04% in the Third District and .02% in the Fifth District.

“We also felt that, again, the (ARP) funds should be used for the greatest good,” Rilling said in April. “And probably the easiest way to accommodate that greatest good across businesses, residents, is to come in at a zero-tax increase, rather than seeing people have to pay more. Some people have lost their employment. Landlords are not able to collect rent in many cases, businesses have seen a decline in their revenue. There’s a lot of different things that are impacting not only the city of Norwalk, but Fairfield County, Connecticut, and indeed the entire nation.”

And, in an item not related to State spending, Duff’s release speaks of Senate Bill 1037, “which expanded the Bottle Bill statutes in Connecticut,” and “will create a new five cent deposit on ‘nips.’”

“The revenue from these deposits made in Norwalk will go directly to the City,” it states. “This money can be used to help clean up the environment and for programs that benefit the environment in Norwalk. Based on 2020 sales of ‘nips’ made in our City, it is anticipated that this bill will bring in approximately $58,000 per year.”

Good thing no one pays federal taxes. The question is why is CT raising taxes when other states are actually giving rebates, not just flushing the irresponsible cities with excess cash?

Hamilton and Estrella are warning about Fiscal Cliff…The Covid funds are to act as a safety net to get our students back to a normal environment. NOT a long term entitlement program!! They both know programs have a 2 year life span and should be used as such.
IF these 2 prophets see the Fiscal Cliff in the future shouldn’t they only plan to use those additional funds for 2 years, and 2 years ONLY…Again, this is not rocket science. In my opinion they are being disingenuous. Is it time for Henry Dachowitz to go to the chalkboard and draw it up for the Board of Education? This should be an election issue and debated BEFORE Hamilton and Estrella drive the bus over that cliff as seems is the plan. (Again, just my opinion)
As a child we moved from Queens, NY because of zoning density issues and underwhelming public schools run by those with agendas not in synch with their community. Why does the movie “Back to the Future” pop into my mind?

It is my hope those that work their buns off to earn a living, raise great kids and don’t have time for politics somehow find the time to understand what the heck is going on..

Sadly no funds appear be set aside to encourage major firms to bring needed good jobs to our City through outright subsidies or tax abatements. Or to encourage a viable downtown with office buildings. Cementing Norwalk’s future as a likely “renter’s City” – at 40% heading higher.
We’d be in a much stronger position encouraging major business development Downtown rather than encouraging apartment buildings. Reducing our 10% poverty rate requires access to good jobs, not more apartment buildings.

No tax increase? I guess car taxes don’t count 🤣
All these new people and 7 years of tax credits for developers in Norwalk’s core from MLK to Route 1.
How many times can voters buy this voodoo economics.

If anyone cares this $46bn budget is $4bn ~10% higher than the current one we are cooking the books to balance. But look at all the new shiny services Duff is promising. It’s like that ginsu blade commercial….but wait, that’s not all….

The Evil rich can’t possibly pay for this. They are already moving to Florida. This article goes on to state “pumps huge new dollars…One billion to cash starved pension funds. Our School Superintendent wanted $5 million for a welcome center when $1500.00 a month rent at Human Services Council would suffice. She over paid on rent but much better than squandering $5 million on a building no one would visit. Can we get some sanity here

Covid spending/aid is crack cocaine to state and local budgets. Trump and Biden have kicked the can down the road (Say! Dan Malloy promised not to do that!) and in a couple of years we will all be worse off. Stamford,next door, raised taxes and the city is spending whatever they can get their hands on with the usual political shenanigans. Ned is offering $$$ to companies to relocate,with a couple of wins. And we look the other way and hold our noses as Phillip Morris relocates here.Nothing like his predecessor, but corporate welfare is still corporate welfare.
At the end of the big giveaway that Trump began, we will still be the most indebted state and all this money will have vanished, very much like the tobacco settlement money.