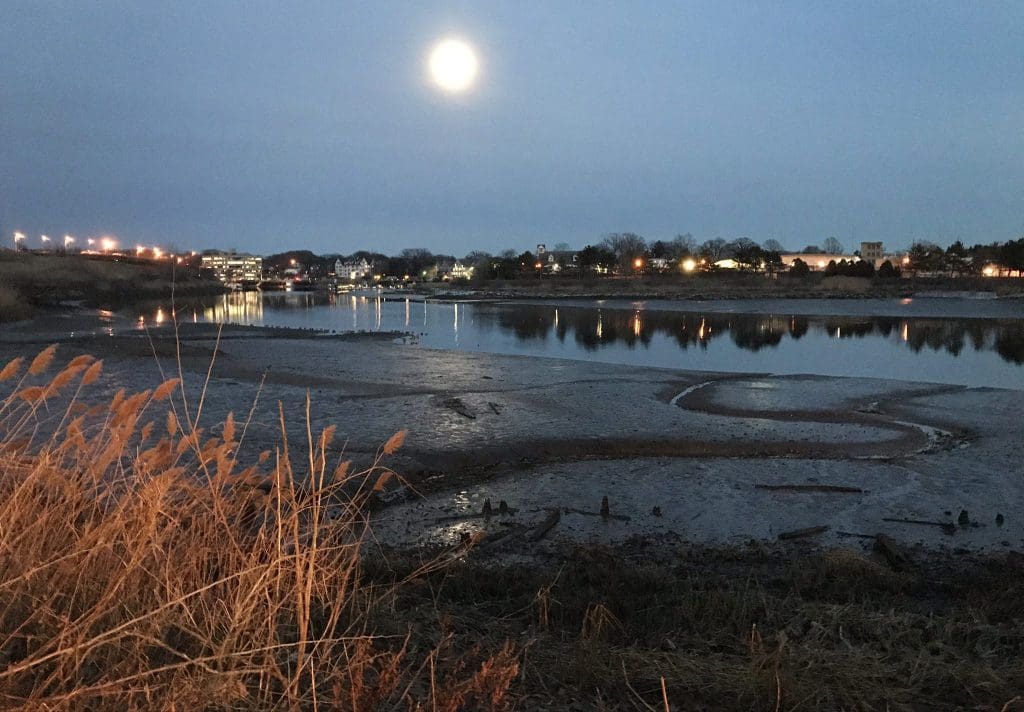 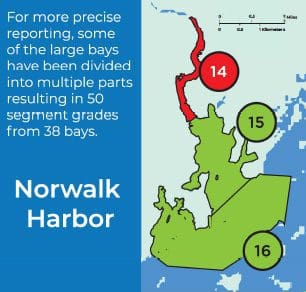 A Save the Sound graphic.

The City received the “report card” Tuesday and is in the process of reviewing its conclusion, “in addition to potential contributing sources outside of the City (i.e. upriver),” Norwalk Chief of Operations and Public Works Anthony Robert Carr said in an email, promising “appropriate actions.”

Mayor’s Water Quality Committee Chairman Joe Schnierlein said he has many questions about the report card.

Save the Sound publishes its report card biennially, “to track and report on the ecological health of the Sound, including trend lines showing patterns over the past 12 years,” it states.

“This is harmful to marine life and can lead to die-offs. Macrophyte sampling also illustrates an abundance of seaweed in this segment of the harbor which is related to excess nitrogen entering the water,” he said.

“Inner Norwalk Harbor is listed by the state of Connecticut as impaired for multiple designated uses. It’s designation in the 2018 Integrated Water Quality Report (the state’s report to Congress) as impaired for marine life—with dissolved oxygen, nutrients, and total nitrogen listed as causes—further supports the F grade assigned by the Long Island Sound Report Card. The current DRAFT 2020 IWQR includes these impairments and causes too.

“Inner Norwalk Harbor is in need of restoration actions. It is currently not meeting CT water quality requirements and subsequently is listed as an impaired waterbody in CT and with the EPA as required under the Clean Water Act. Save the Sound urges Norwalk residents and municipal leaders to take actions to restore Inner Norwalk Harbor. Reducing impervious surfaces (roads, parking lots, roofs), capturing and infiltrating stormwater with green infrastructure, fertilizer application reduction in the lands draining to the harbor, removal of a combined sewer overflow and the unacceptable number of sanitary sewer overflows that enter the water, upgrades/repairs to aging sanitary sewer infrastructure,  and other measures to reduce nitrogen entering the waterway could all yield positive results.”

“Within recent decades, water quality within the Norwalk Harbor has experienced significant improvements,” Carr wrote. “Like all concerns raised with the City, we take these findings very seriously.  We will continue to evaluate the limited contents of the Save the Sound Annual Report Card 2020, and will take appropriate actions as necessary.”

“I am waiting to get feedback from the organizations that do the sampling, including Save the Sound,” Schnierlein wrote. “However, there are several questions that I have concerns about.”
His list:

Ban chem lawn. Who needs fertilizer on a lawn,then irrigation to get it into the water table? People in my neighborhood are still irrigating,even with the drought. It makes no sense to me. My lawn is green,and gets compost occasionally.

We have an easement on our property to enable the City Of Norwalk access to a pond adjacent to our neighborhood properties. Unmanaged sewage water, containing contamination from landscapers and autos, guided by an engineered street waste piping system connecting the catch basins on the street and emptying into this health hazard of a pond is in extreme need of maintenance. It was last done in 1993. Our requests for assistance from Norwalk in solving this evolving pollution disaster has gone unheeded despite numerous requests for action.

I coulda toldja that. Horrible place to kayak.

Let me try to understand this. There is a waste water treatment plant that waste water flows out of.

You have a landfill full of chemicals, trash and who knows what else that was burning for years dating back to the 1970’s and is now “capped”.

All those new apartment buildings add absolutely NO additional flow into the treatment plant so why not add more.

There are tides that ebb and flow. Mud and silt along the river line.

Then there was the EPA that did storm water and sanity sewer separations until the late 1990’s Which by the way the storm water that was being treated before is no longer being treated. Yes, the EPA stopped doing that AFTER they found that the animal waste in the sewers only increased the fecal count in the harbor. Look it up. The fecal count was much lower before they started. Oh, where do you think all the goose poop washes out to when it rains?

So now your telling us the inner harbor which has only one exit for the water to flow out which is the same exit of the waste water plant is now graded an F?

Go ahead, throw a ton of money at trying to fix it. Just like the EPA you’ll only make it worse. The EPA is very good at “correcting” things with your tax dollars.