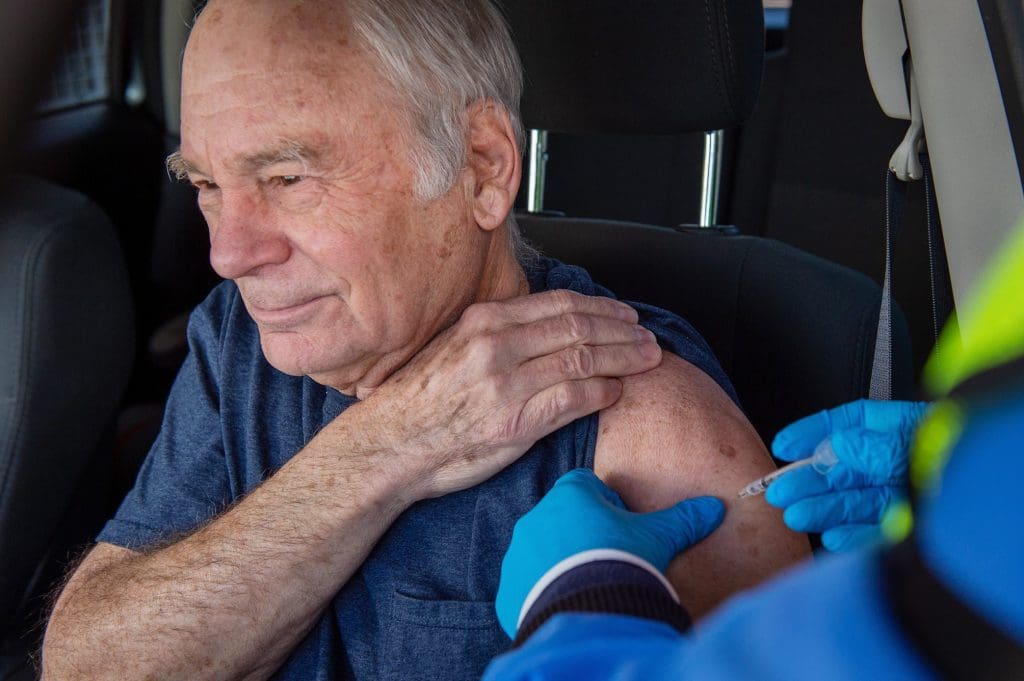 For weeks, the state’s top elected officials have touted how well Connecticut is doing in its coronavirus vaccine rollout.

“We’ve done pretty well here in the state of Connecticut in terms of getting a higher percentage of our people vaccinated,” Gov. Ned Lamont said Thursday. “Forty-seven thousand people over the age of 75 are vaccinated, and close to 260,000 vaccines overall distributed so far.”

But for many seniors across the state, the process has been anything but successful — or easy.

People 75 and older, who are now eligible to receive the COVID-19 vaccine along with frontline health care workers and first responders, are increasingly complaining of long wait times when dialing the state’s new call center. Others have used the automated call-back system, but are left waiting for days for a return call. Many don’t have computer access and rely on the phone line to secure an appointment.

“Due to high volume, not all callers are able to be matched with a call taker or an appointment on their first try,” they wrote. “There is a callback feature, which means that callers can select an option to receive a call back when it is their turn rather than wait on hold. United Way is doing their very best to return all calls as soon as possible. However, this may still take days.”

Ethel Fried, 88, said she tried repeatedly to make an appointment by dialing the number the state recently made available. After several unsuccessful attempts, she took advantage of the call-back service – leaving her phone number on a recording so someone could get back to her when call volumes were down. By Thursday night, two days after her most recent attempt, she still had not heard back from anyone.

Fried said her computer has an outdated operating system, and she does not own a mobile phone. After striking out with the state’s call center, she dialed a number for UConn Health. The earliest appointment they offered her was on March 23, which she reluctantly accepted.

The state plans to have most people in the 75 and older age group vaccinated by early February. The shot is expected to be available to people aged 65 to 74 at the start of next month, and to teachers, grocery store employees other essential workers by late February or early March.

Connecticut has consistently ranked in the top five in the country when it comes to the number of doses administered and Lamont was recently tapped to co-chair a vaccine committee by the National Governor’s Association.

As of Thursday, more than 258,000 doses had been administered so far during Phase 1a and the beginning of Phase 1b, which includes more than one million people.

With her appointment still two months away, Fried said she feels discouraged. She has been housebound since the pandemic began.

“Maybe they don’t know what’s going on on the front lines,” she said of those coordinating the vaccine effort. “It’s a nightmare.”

On Friday morning, officials in Vernon were standing up a special clinic at the town’s senior center to vaccinate the elderly. But by Thursday night, only 52 of the 204 appointment slots had been filled.

Michael Purcaro, Vernon’s emergency management director, said his office was getting inundated with calls from distraught seniors who were having trouble booking an appointment online or were unable to get through to the state’s vaccine phone line.

Early Friday, Vernon opened its own call center, staffed by town employees, in a frantic effort to fill the open spots. They took calls and manually entered the appointments online, signing up another 76 people.

“We have people from Fairfield County who called to get an appointment and even some from Massachusetts,” Purcaro said.  “The No. 1 barrier we have for vaccinating 75 and older residents is not the supply of vaccine, but the registration systems provided by the federal and state governments. The system requires you have internet access and an e-mail address, plus the website has multiple glitches. It is a barrier to getting this age group vaccinated.”

“We’re not waiting for the state to fix the problems,” he added. “It’s incredible to me that there isn’t a telephone system set up that works for the people in this age group.”

The Vaccine Administration Management System (VAMS) is a national database created by the federal government to track vaccinations. The system requires users to create an account, input their e-mail address and then search for available clinics, but for many elderly residents the task is daunting or they simply don’t have computer access.

Allen and Helga Abatayo had tried registering online but it didn’t work. So when a call came at 8 a.m. Friday from Vernon officials that slots were available they jumped.

“I probably wouldn’t have gotten vaccinated if I didn’t get called directly,” Abatayo said. “I just turned 78, so I’m glad I got it.” 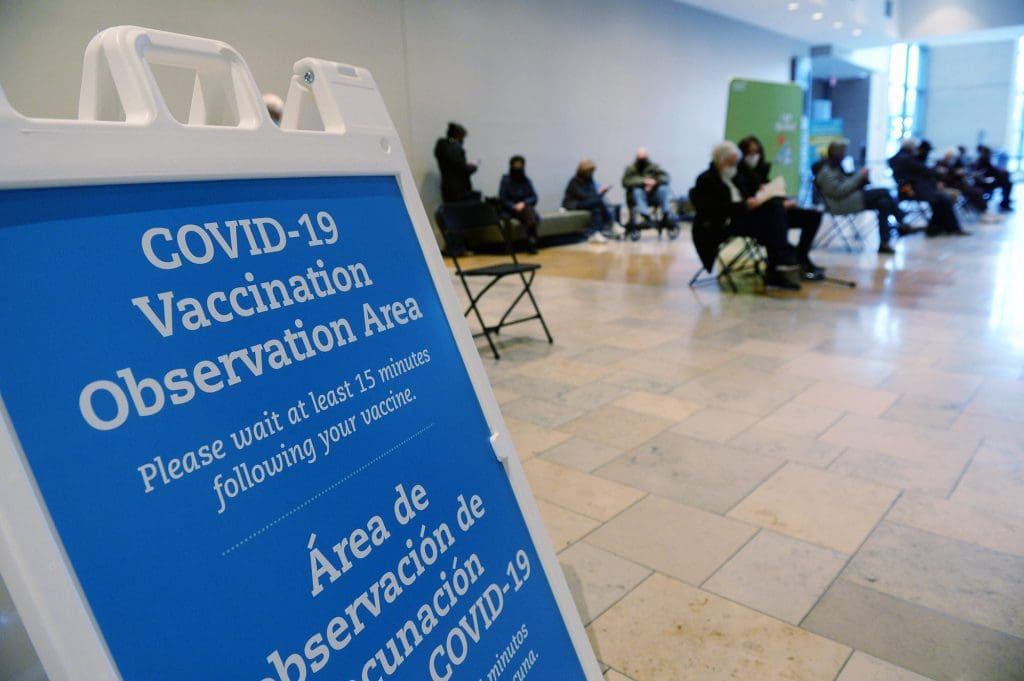 Seniors 75 and over wait 15 minutes in an observation area after receiving the first dose of the Moderna COVID-19 vaccine at the Connecticut Convention Center. (Cloe Poisson, CTMirror.org)

The situation in Vernon is not unique. Other health directors said their offices have been flooded with calls from panicked seniors scrambling to find out how to sign up or where to get vaccinated.

The Uncas Health District ran two clinics this week in the Norwich area and vaccinated 200 people. Health Director Patrick McCormack said the district had two slots for which people didn’t show up. The local senior center director knew two men in their 80s who didn’t have computers or smart phones. He signed them up and got them to the clinic.

“We were able to help navigate them through the system, but not everyone has someone who can do all of that for them,” McCormack said. “We are going to have to figure out ways to reach this population if we are going to get them vaccinated.”

Aside from long wait times, the state’s call center has another problem. So far, it is only able to book appointments at a new drive-through vaccination site in East Hartford. But that’s a long way to go for seniors in Fairfield, New London, and Windham counties, among other far-out areas.

State leaders acknowledged the problem and said they are trying to incorporate the dozens of federally qualified health centers, outpatient facilities and local health districts now administering vaccines into the system.

“We have been working with providers across the state to add appointment slots to the group that’s answering the calls on that call center line so they can start booking people into other parts of the state,” said Josh Geballe, Connecticut’s chief operating officer. “There will be many more options for people who call in to that line, in addition to other options that folks have to book directly with different providers and health care systems around the state.”

Getting an appointment has also proved problematic for non-English speakers. The Vaccine Administration Management System (VAMS), a federal portal being used in Connecticut, allows residents to book appointments online. But its forms are only available in English.

So far, the state’s main solution is to direct non-English speakers to the call center – where wait times have caused some people to give up.

“It is a known shortcoming of that system,” Geballe said of VAMS. “It’s one of the many things we have on the list – we’d like to see that system improved.”

Since your tag line is Nancy on Norwalk perhaps going forward the articles could be about Norwalk. The beauty of your sight was that the articles were Norwalk based

Speaking of nightmares, Norwalk City Hall has visitors sign in with a touchpad and they arent even sanitizing it in between people.

NoN might want to investigate this super spreader. NO care for the publics health at the front desk.