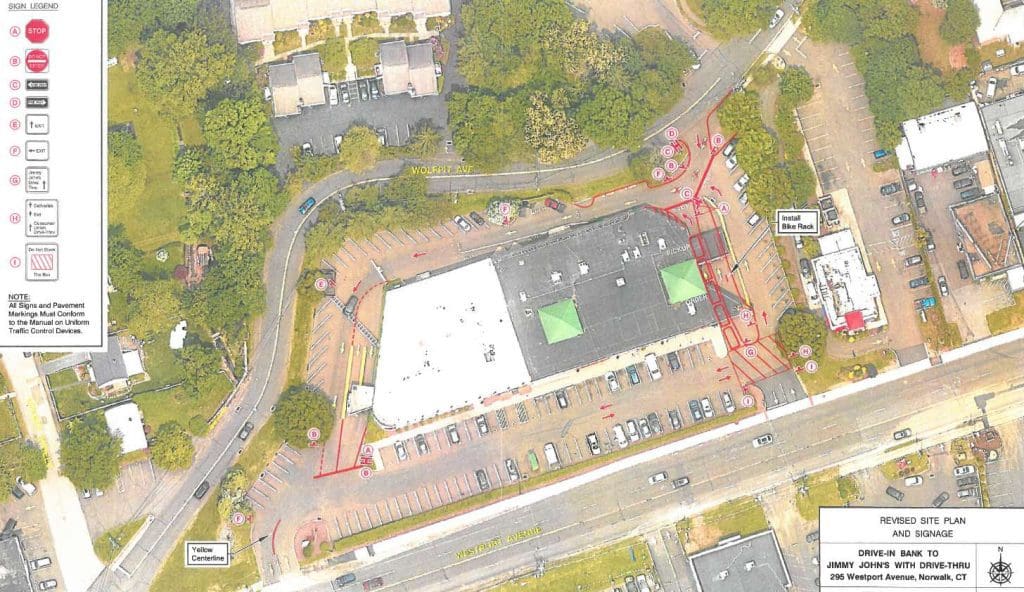 The revised site plan for a Jimmy John’s planned for 295 Westport Ave, as shown in a City of Norwalk document.

NORWALK, Conn. — Submarine sandwich seller Jimmy John’s has been green-lighted to open on Westport Avenue in Norwalk, overcoming the Zoning Commission’s concerns about traffic by hashing out the issues with the Department of Transportation, Mobility and Parking (TMP).

“The concerns we expressed at the last meeting still exist, but this approval addresses them and gives the city the opportunity to make sure that this doesn’t become an attractive nuisance,” Zoning Commission Chairman Lou Schulman said.

M.F. DiScala, owner of 295 Westport Ave., has agreed to series of conditions aimed at avoiding the nightmare seen on the other side of town where drivers waiting to get to the Chick-Fil-a drive-thru jammed up Connecticut Avenue.

If, within the first two years the franchise is open, folks wind up lining up on the road, DiScala will close the easterly entrance to the shopping center so that it is used only as an exit, and apply for State approval to reconfigure the access to be one-lane, exit only. Drivers will have to que up in front of the plaza.

“The long and the short of it is that staff has been concerned about the queue distance between the drive thru and Westport Avenue,” Planning and Zoning Director Steven Kleppin said at Thursday’s Zoning Commission meeting. “So the idea is that we understand when there’s a new business in town, especially a restaurant, it’s something shiny and new. And people like to go to that and gravitate towards it. So we anticipate that there’s definitely going to be some initial increased traffic where we hope there, there’s measures in place to deal with that.” 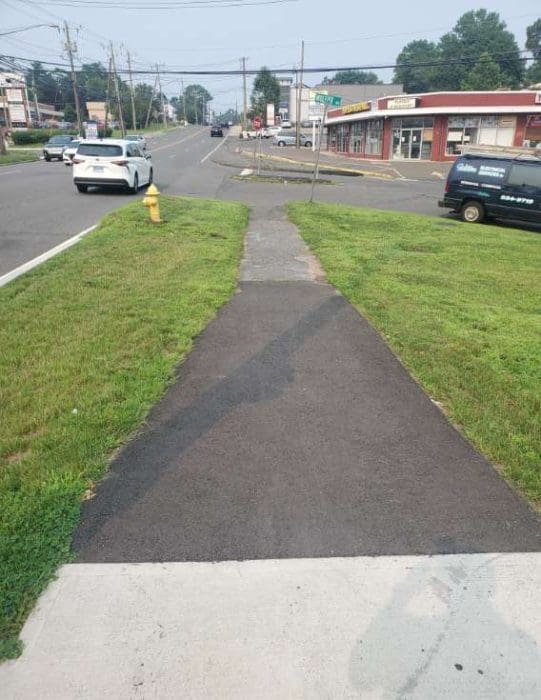 The existing condition on Westport Avenue where it meets Wolfpit Avenue, as shown in a City of Norwalk document.

And there’s good news for Westport Avenue pedestrians: the deal includes a crosswalk for Wolfpit Avenue. As part of a public/private partnership, the concrete sidewalk will be extended to meet Wolfpit, replacing the asphalt that’s there now.

“We’ll partner with the applicant on improving pedestrian connectivity to the site, and which helps, hopefully helps the business as well as helps residents,” Kleppin said.

The vote to approve was unanimous. Schulman said, “Staff has done a fine job here of addressing our concerns and working, working with the applicant to get this project going forward.”

Updated, 1:46 p.m.: Corrections made regarding closing the easterly access.

I have absolutely no idea what this latest fast food restaurant brings to Norwalk, but I don’t want to pass up on an opportunity to urge folks to discover the original Jimmy John, part of Norwalk’s civil war history. Former news reporter & long time Norwalk resident Dorothy Mobilia wrote a historical novel about Jimmy John, who eventually founded the first African-American church here in Norwalk. Add Ms Mobilia’s novel to your summer reading: How Jimmy John Won His Cloak of Freedom.

The owners of this chain have posted all over the web pictures of themselves standing over poor dead big African game they have killed with guns big enough to beat an army. Horrible.

Will there also be a shiny new apartment complex going up right next to the new restaurant? After all, what is Norwalk without gridlock traffic?