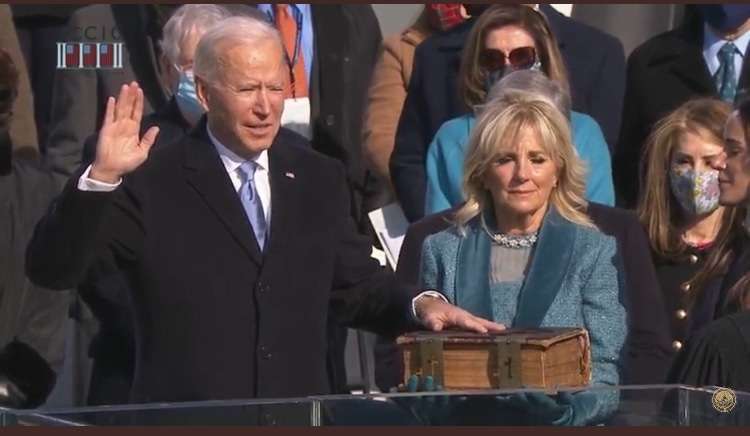 America took a deep breath Wednesday and watched Joseph R. Biden Jr. uneventfully inaugurated as the 46th president of the United States outside a U.S. Capitol invaded two weeks ago by rioters intent on stopping the certification of his election.

“This is America’s day,” Biden said. “This is democracy’s day, the day of history and hope of renewal and resolve.”

As promised, Donald J. Trump was absent, his last act as president a calculated snub of his successor and the nation’s long and celebrated record of the peaceful transition of power. Vice President Mike Pence, who declared Biden the victor, applauded the new president.

In a 26-minute inaugural address, Biden ignored the absence of his twice-impeached predecessor to invite America to join in a celebration, not of a candidate’s victory, but of a larger cause — “the cause of democracy.”

Biden, 78, a former senator and vice president who takes office as the oldest president, assumed the presidency by taking an oath administered by Chief Justice John Roberts, repeating the words uttered by every president since 1789.

Kamala Harris, 56, a California senator who sought the Democratic nomination won by Biden, preceded him to the lectern, shattering America’s second-to-last glass ceiling as she became the first woman to become vice president, breaking barriers of race and gender.

“Relief. Joy. A sense of purpose and responsibility,” Sen. Chris Murphy, D-Conn., said in a tweet from the ceremony. “I feel all of it.”

“What an amazing moment. Hope and healing were given new meaning today. It brought tears to my eyes and restored my faith in American leaders,” said Sen. Richard Blumenthal, D-Conn. 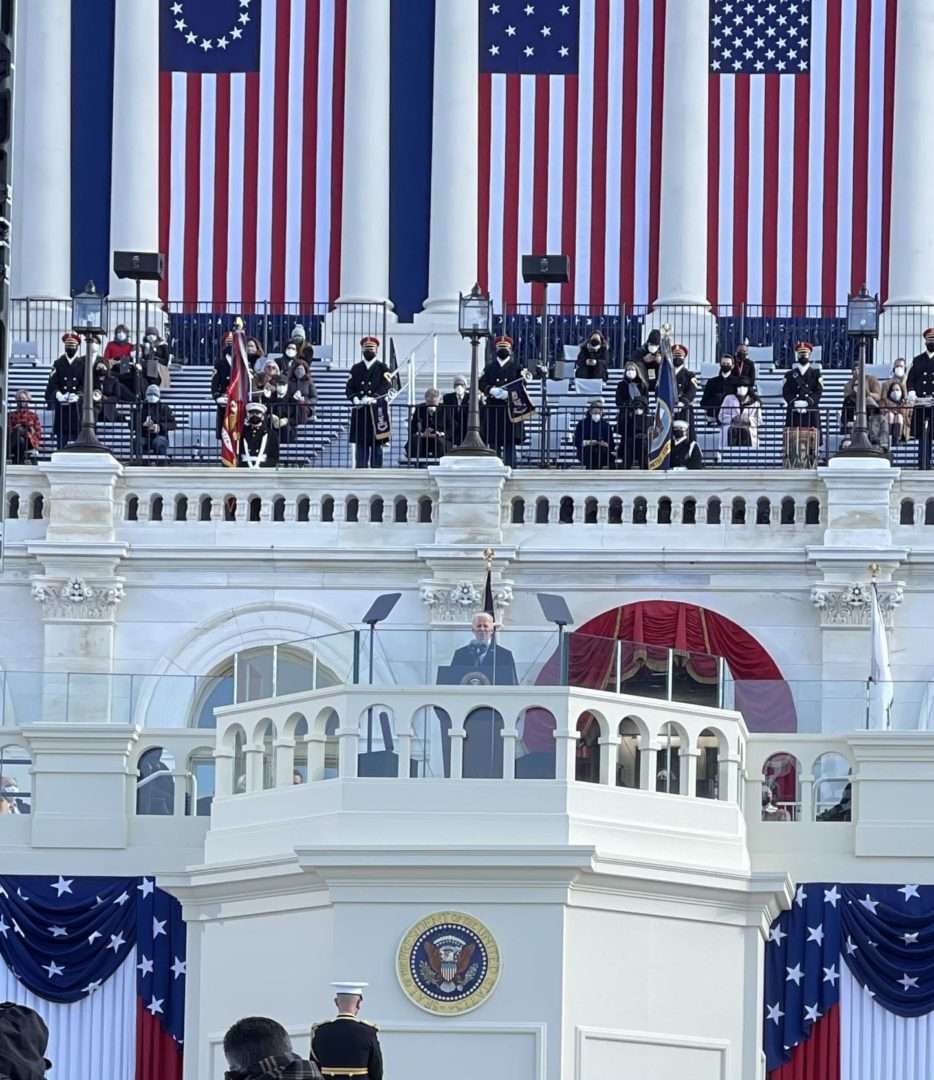 Biden and Harris took office deep into a pandemic that has claimed 400,000 lives in America, disrupted commerce and social life, and added to the polarization of a nation unable to agree on matters large and small.

On the platform with them was Sen. Mitch McConnell of Kentucky, the highest-ranking Republican in the Senate, who attested to the legitimacy of their victory, an assessment disputed by 64% of Republican voters in the latest Quinnipiac poll.

It was a day of change and constancy, when the smallest details of tradition and gestures of grace resonated. The co-chair of the bipartisan inaugural committee was Sen. Roy Blunt, a Republican of Missouri, who called the ceremony “commonplace and miraculous.” 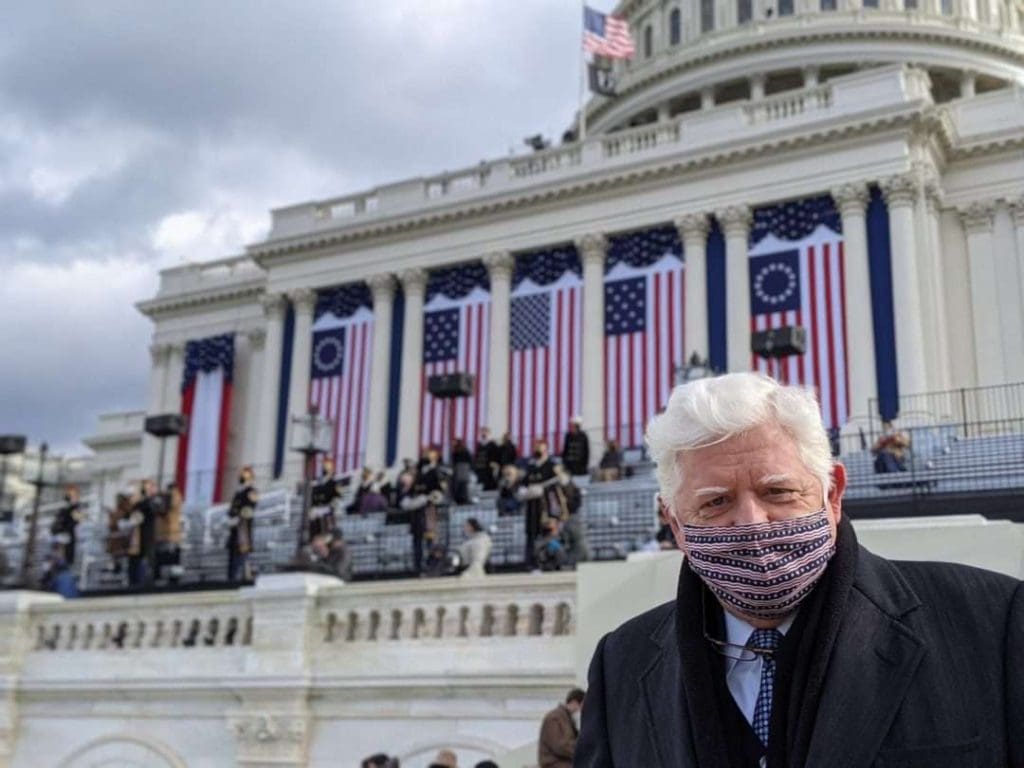 “We pledge today to never take our democracy for granted,” said Sen. Amy Klobuchar, D-Minn., the other inaugural co-chair.

Murphy credited Pence for choosing to attend the inauguration over a sendoff for Trump at Joint Base Andrews.

“Mike Pence legitimately took a big political risk by being there today,” Murphy said. “It’s unfortunate that that the state of the Republican Party makes a basic constitutional duty a risk. But he did the right thing by being there. And I think it was important for the country to see some elements of the Trump administration represented on stage.”

The only former president not to attend was the 96-year-old Jimmy Carter, who spoke with Biden the previous night. The former presidents and first ladies arrived in order of their presidency, first William J. Clinton, then George W. Bush and, finally, Barack Obama. 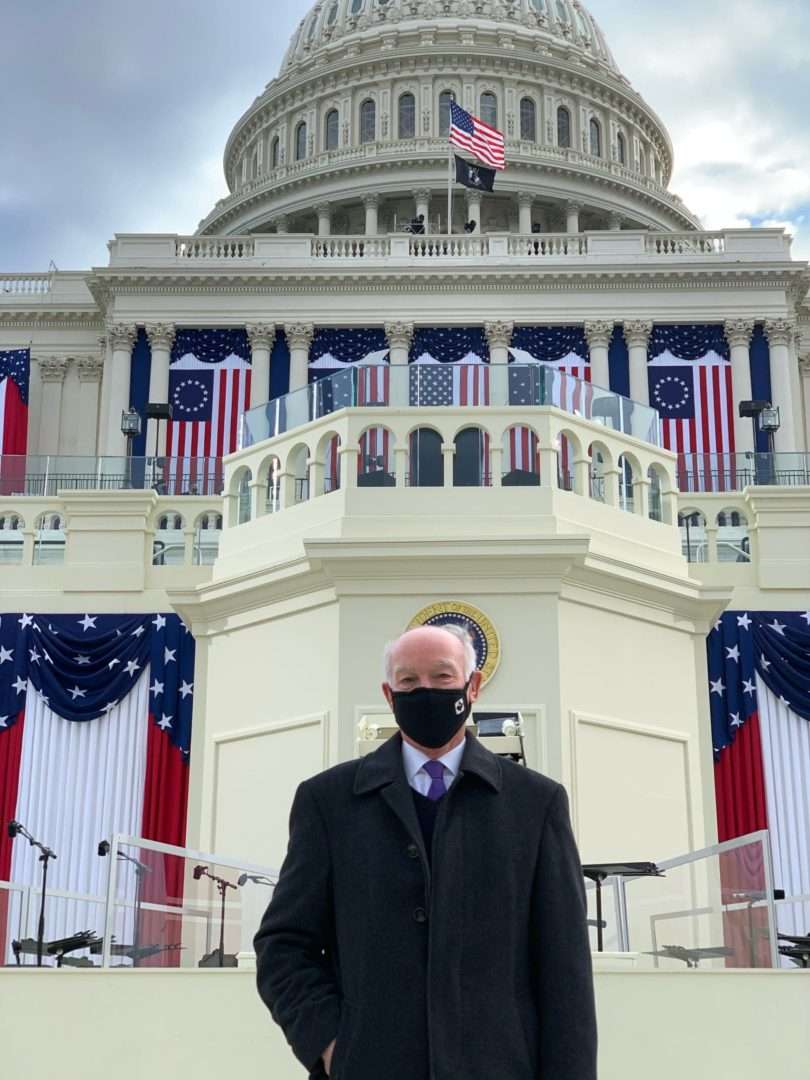 U.S. Rep. Joe Courtney posed for a photograph in from the Capitol before the inauguration began. (Joe Courtney, Twitter)

It is the smallest of clubs, and the men and their wives could be seen making small talk. It was a scene reminiscent of the gathering at the funeral of John McCain, where the former presidents seemed at ease with one another and Trump was unwelcome.

Biden paused by Obama as he entered, and the two men, each wearing a COVID mask, fist-bumped.

“I thank my predecessors of both parties for their presence here today. I thank you from the bottom of my heart,” Biden said. “And I know the resilience of our Constitution, and the strength, the strength of our nation, as does President Carter, who I spoke with last night, who cannot be with us today, but whom we salute for his lifetime and service.” 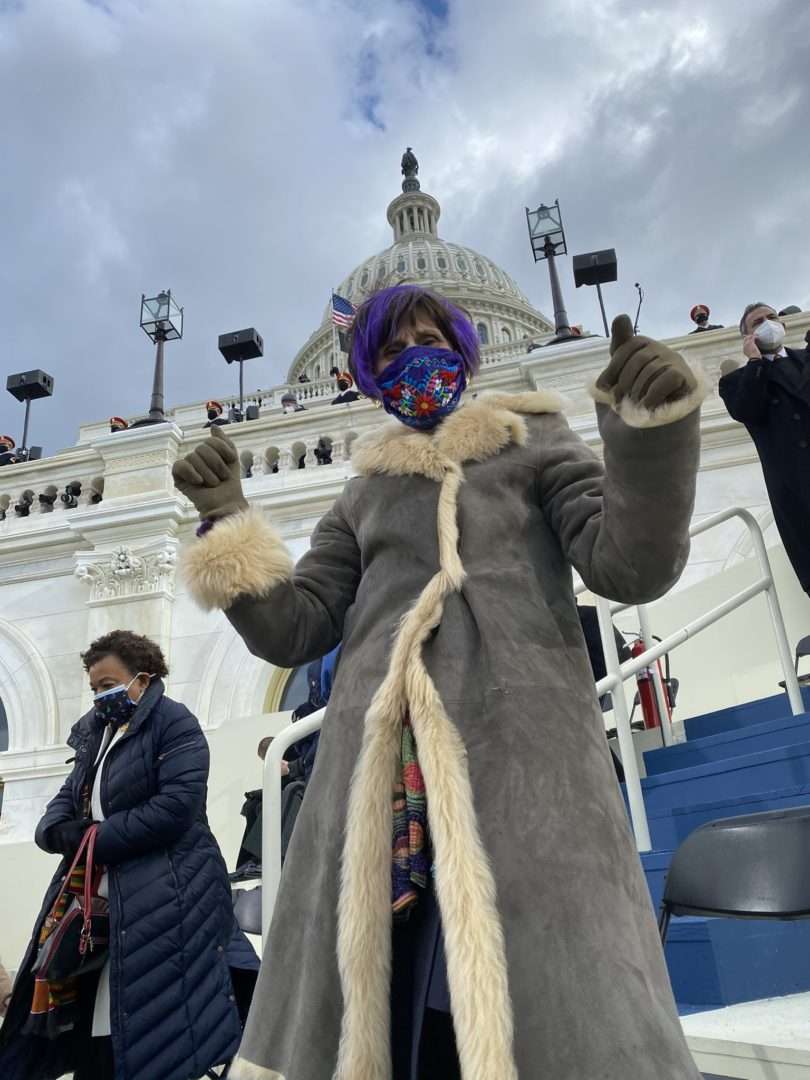 Biden spoke of the virus that silently stalks the nation, taking more lives that the nation lost in World War II. He spoke of polarization.

“I know the forces that divide us are deep, and they are real. But I also know they are not new. Our history has been a constant struggle between the American ideal that we’re all created equal and the harsh, ugly reality that racism, nativism, fear, demonization have long torn us apart,” Biden said. “The battle is perennial. And victory is never assured.”

Biden appealed to the 74 million of Americans who voted for his opponent and the 31% who believe another man should have been taking the oath.

“Hear me out as we move forward. Take a measure of me and my heart,” he said. “If you still disagree, so be it. That’s democracy. That’s America. The right to dissent peaceably within the guardrails of our Republic is perhaps this nation’s greatest strength. Yet, hear me clearly. Disagreement must not lead to disunion.”

Gov. Ned Lamont, the first governor outside Biden’s home state to endorse his candidacy, said on a call from Connecticut that the day marked a step on a return to normalcy. 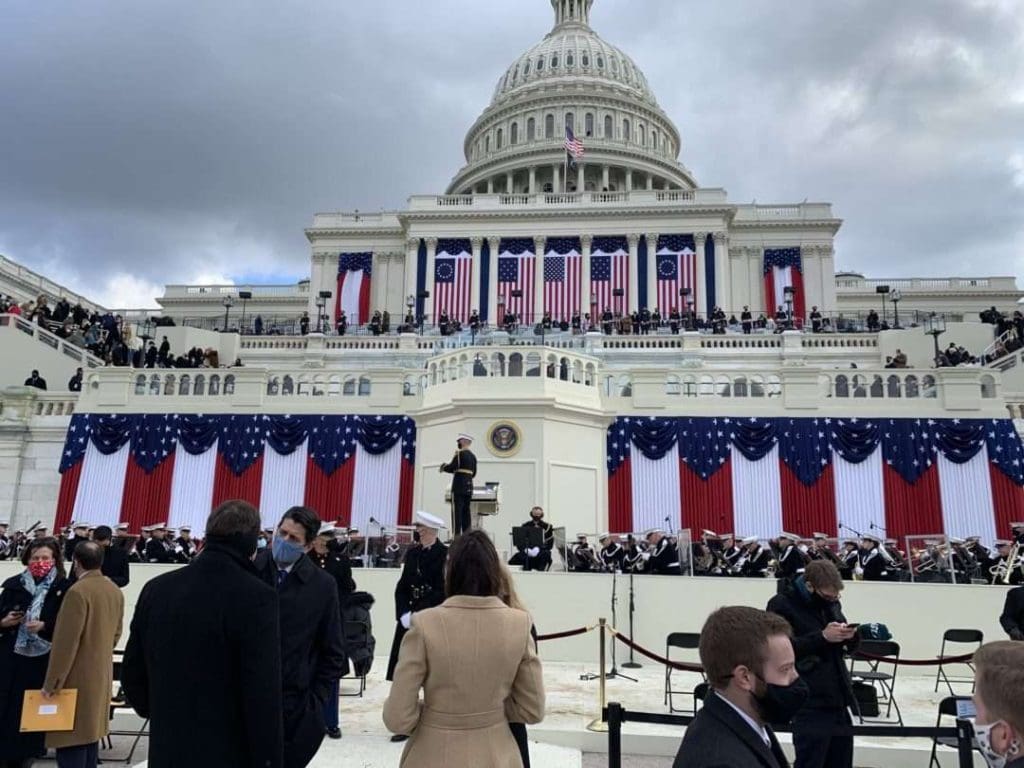 Connecticut was represented by its two senators and five House members, most of whom celebrated on Twitter. 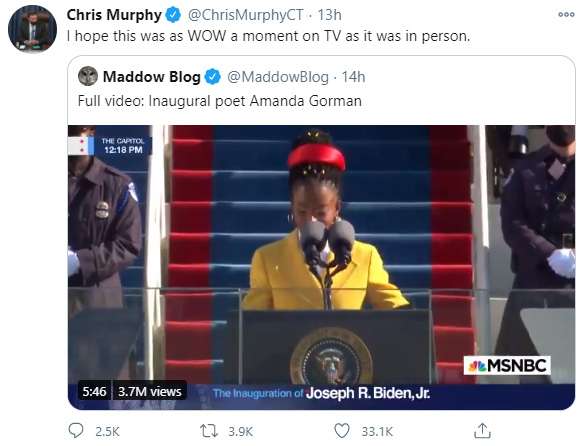 Others were playfully partisan. U.S. Rep.. Jim Himes, D-4th District, retweeted this dig from California Gavin Newsom, who had fun with the choice of Lady Gaga to sing the National Anthem. 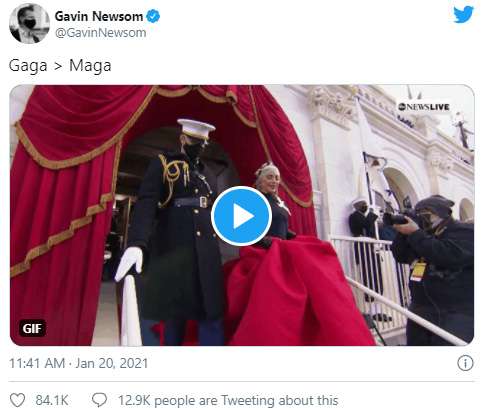 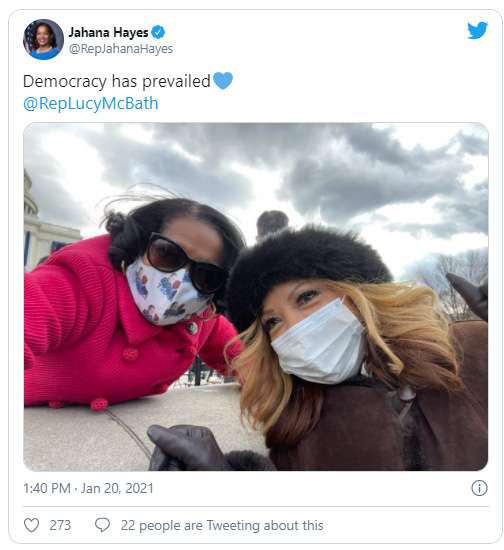