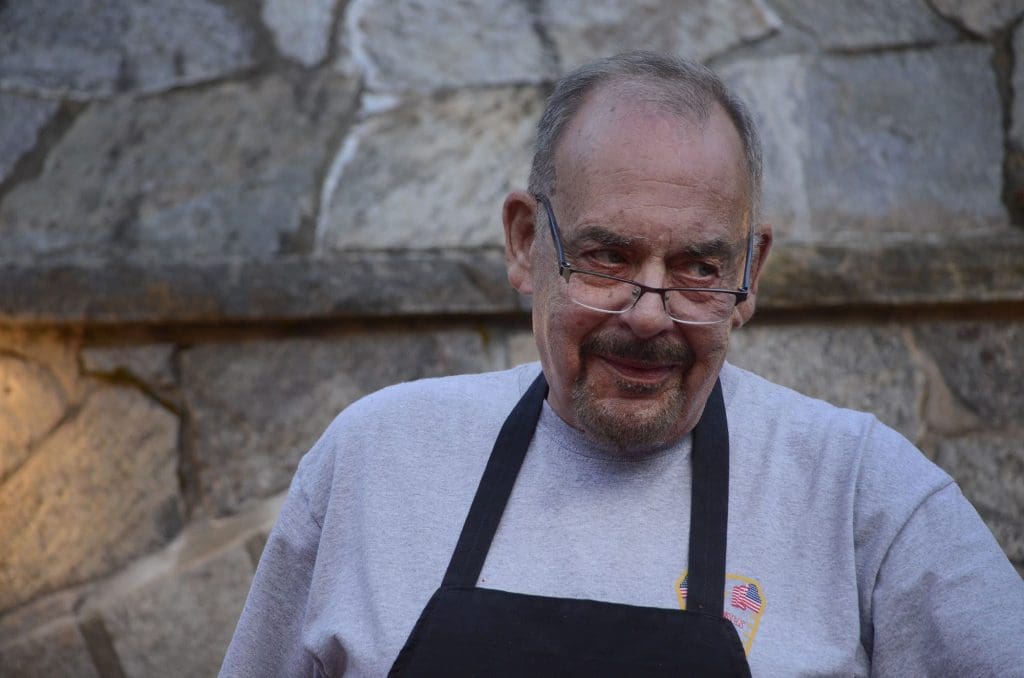 Norwalk Constable John Romano, during a May 24 Republican Town Committee fundraiser held on his expansive patio.

NORWALK, Conn. — John Romano, a Norwalk Republican Party mover and shaker for many years, has passed away.

“Words are difficult right now…John was dedicated to the party & every life he touched. He was a strong force with a big heart & provided advice & guidance to so many ~ we will miss you John,” the Republican Town Committee said in an email.

His son, in a Facebook post yesterday, said Romano had recently been diagnosed with an illness and gone downhill quickly. He was expected to enter a hospice today.

Romano was 73. He was born July 31, 1948 and came to Norwalk in 1952, he said in a letter to former Mayor Richard Moccia. He has served on the Harbor Management Commission since Moccia appointed him in 2006 and in recent years has been its chairman. He has led the RTC District D Committee, hosting fundraisers at his house. He has also been a constable for years, winning reelection last fall.

“His roots run deep as a successful business owner with All American Custom Pools & Spas in Norwalk as well as his newest venture as a managing partner of Milford Sports Pub and Grill. John Romano owns several properties in Norwalk both residential and commercial.

“John attended Central Catholic High School and Sacred Heart University. He has been a long-serving member of the Norwalk Community and served on many boards and commissions such as Mayors Water Quality Committee and now on the Norwalk Harbor Commission as Chairman. He has been involved with many organizations such as Italian/American Police Society, Club Italia, Sons of Italy, St. Ann’s and the Norwalk Chamber of Commerce. You will see John’s friendly face every year waving from his convertible at the Norwalk Memorial Day Parade proudly driving Norwalk veterans who served.

“John resides in Norwalk with his wife Nataliya and their daughter Nicole who is 12 years old. He has two other older children Roberto and Michael who he greatly enjoys spending time with.”

Mayor Harry Rilling said Romano was very passionate about the harbor and making sure the city did everything possible to protect it.

“John had a big heart. He cared deeply about his family, his friends and Norwalk.

“John served the City in leadership positions for many years on both the Harbor Commission and the Republican Town Committee. He also ran a number of successful Norwalk businesses.

“I extend my sincere condolences to his entire family, and want to say that I am really going to miss him.”

“John was a great friend not only politically but personally,” Moccia said in an email. “Spent many hours on the water with him on his boat, he was a master seaman.  One of the reasons I appointed him to the Harbor Commission was because of his knowledge of the Norwalk Harbor.   He was also an astute businessman and employed local people in his pool business.   He also served his community in the political arena.  One thing about John, he did not suffer fools, and was not afraid to express his opinion, which he often did to me when I was in office.  The last time we were together for an extended period of time was at the Republican Convention in Cleveland when Trump was nominated.   I would see him occasionally at a state event, and he was always the same gregarious John.  I will miss him.  My sincere condolences his Wife and Children and all the members of his family.”

“My love and {affinity} for the Norwalk harbor started as a young man, whose family very much liked to avail themselves of the resources that the sound brought to us all as Norwalk Citizens,” Romano wrote to Moccia in 2006. “We loved … fishing and the use of the sound in boating and water recreation. My family and I have been boaters since the early 80’s, having graduated from humble beginnings with an 18′ ski boat to a 32′, then 40′. I have just recently donated our 50′ Sea Ray to the Nautical Sciences Foundation for the study of marine life. We will continue with a new boat purchase in the near future.”

Suda, in a Facebook post, called Romano an “amazing man” who “had one of the biggest hearts I knew.”

“Thank you for our many great talks over the years and the guidance and knowledge you not only taught me but instilled in me. You truly opened my eyes to many things and made me a better man. Keep that thumb up and keep that expresso machine warm for all your friends that will follow you to heaven one day,” Suda said.

“I’m deeply saddened by John’s sudden departure,” Common Council member Bryan Meek (R-District D) said in an email. “He was a force of nature with a big heart and I will miss him.  My heart breaks for the family who we are praying for in this difficult time.  His contributions and dedication to the Norwalk community through decades of selfless service are a testament to the type of person he was.  May God rest his soul.”

John was my mentor for so many years. He was always open to meeting with any of my friends interested learning about Real Estate in Norwalk and help them in any way. It was just weeks ago John came on board our boat and made incredible Bruschetta and his lovely bride Nataliya provided delicious caviar. We cruised the harbor and John’s knowledge and insights were so insightful. Any time i spend time with John I learn so much.

This is a shocking loss. My condolences to his family and friends. John had a rare passion for Norwalk and helping our community, and he lived life to the fullest.

John and I argued often online, especially when it came to Trump who he supported and I didn’t. Our arguments got ugly at times, so when I suddenly found myself sitting directly opposite him at the 2018 (or maybe it was 2019) St Ann’s Festival, after I grabbed the last empty seat at a long crowded table, I didn’t know what to expect except another heated exchange.

But over our sausage and peppers we started talking about Italy (I told him I secretly wanted to be Italian!), then family, then Norwalk, and not once about our political differences, except when we got up and said goodbye he said even though I was wrong about everything he enjoyed the arguments! I said “likewise, John!”

We laughed and shook hands, and in the next election in 2020 we sparred again online, but this time we would both say at the end of some heated argument “have a good weekend” or “hope your family is well.” That was John.

At this years St Ann’s Festival coming up on July 21-24, I’ll be pinning a generous donation onto the statue of St Ann in John’s memory, for all he did for our community. May his soul rest in peace.

John was a great man, I will miss him a lot. Rest my friend, thank you for all you did for Norwalk and most important your friendship for many years.

John was a Superhero, someone with character, courage and intelligence, someone willing to take a stand, listen and debate, someone who cared about our city, our community, and the Norwalk Harbor, putting common interests before his own. John didn’t treat anyone with a title differently from someone with no title or little to their name. John was a gentleman.

My deepest condolences to John’s family. It was Super Moon last night, the largest and brightest moon of the year, and John’s spirit will, like the moonlight last night, always be in Norwalk and reflecting off the water. The moon gets it’s light from the sun, so John’s spirit will never leave Norwalk, day or night, or the hearts of all of us who knew him, whose lives he touched.

John, thank you for all you did for Norwalk and the State of CT, where regulations you influenced will be around forever. Thank you for being you. It was an honor to know you.

This truly was a sad thing to hear about…
I met him many many years ago when I befreinded his amazing sons…,
He was a good man to talk with, and even more fun to play cards with..
My deepest sympathys are with his family