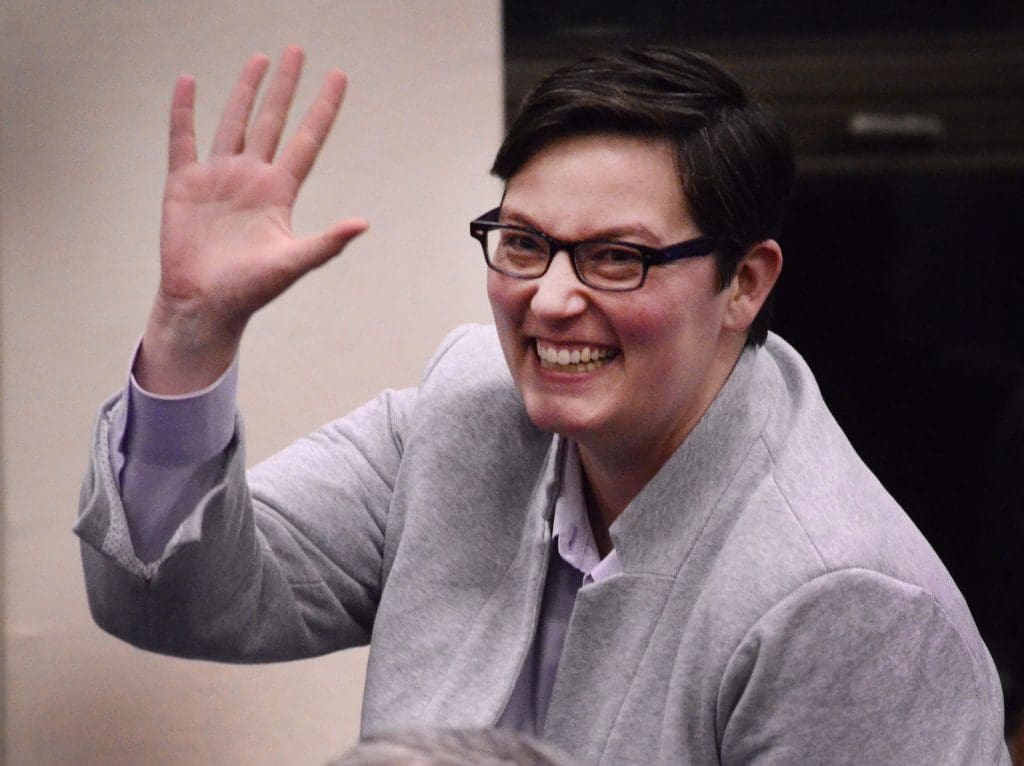 Dominique Johnson reacts Monday after being appointed by the Norwalk Democratic Town Committee to serve as Colin Hosten’s replacement on the Common Council.

Contention and controversy surrounded the decision, with Lynne Moore remarking afterwards that District B had been “snubbed.”

Johnson, a District D resident, was appointed to fill the At Large seat vacated when Colin Hosten was appointed last month to the Board of Education. She is a consultant who “works with nonprofits to build greater understanding of the complex issues they face” and Director of Strategic and Digital Planning for WMNR Fine Arts Radio, according to her LinkedIn page. She is also co-founder of Norwalk Women Who Vote and an adjunct professor at Norwalk Community College.

She joins a 15-member Council, that features one Republican, on Tuesday. She will be the Council’s fourth woman.

“The thing I’m looking forward to most is working with this team that we have in place,” she said. “I know I’m coming on as a replacement after the election and I’m coming on into an At Large role, so that At Large role is something that as I said, I take that seriously.”

Also, “I’m also really proud to following Colin Hosten’s footsteps as an openly LGBTQ Council person,” she said. “As a woman who’s also LGBTQ, I think it means a lot to be able to give you this particular opportunity to really be visible.”

It had been rumored that James Page, who narrowly fell short in his bid to represent District D on the Council, was seeking the seat along with Johnson. But Democratic Town Committee Chairman Ed Camacho began the meeting by announcing that Page had withdrawn, in an email sent just minutes earlier.

District B leader Bruce Morris moved to table the vote to give others the opportunity to consider taking on the role, noting that District D already has three Council members, two of them elected At Large.

It used to be that each district submitted an At Large candidate but “six or eight years ago” that changed and “I told everyone at that point in time, it would make a dramatic change in the shift of power and politics of our Democratic Party,” he said.

The change meant that it would be primarily candidates in Districts D and E who took the At Large seats because they’re well-funded, and “the reality is we look at our Common Council, the way it has been in the latter years, that has been the case,” he said.

The conversation got testy, with Camacho attempting to move the meeting along in the face of a deadline to vacate the room at the Norwalk Public Library. Morris countered, “You primarily were the person who went to people ask them if they wanted to run… this was not open to every member of the Democratic Party.”

Anyone could be nominated from the floor, Camacho and DTC Vice Chairwoman Eloisa Melendez replied. Everyone knew last month that there was a vacancy, they said. Anyone could have tried to recruit a candidate.

District B member Ron Banks then spoke of a “sense sometimes that not everybody feels like they’re equally involved in all of the processes that are going on.” He respected what Camacho said about everyone knowing the position was open but some thought they could come to the meeting and make a group decision, he said.

“We are very, very fortunate…as a Democratic Party in this community, we have the momentum working in our favor,” Banks said. “I hope that we don’t let our own differences create such a problem for that we become a bit stagnant in what we really could achieve if we all felt we had a voice in what we’re doing.”

“Leadership can’t speak to every, 55 of us, or for that matter, people outside of this of this room, because anyone could run for the Common Council and be nominated and selected by this body at this meeting,” Camacho replied. “… It’s sort of a two way street in order for this thing to work. Everyone needs to feel and be involved in the same way and at the end of the day, there are only 8-10 people 12 people, perhaps, who really roll up their sleeves and do a lot of the heavy lifting in this town committee.”

Moore commented that “basically,” District B was “snubbed” and “that’s been part of the issue for long term that we have dealt with in this DTC.”

Moore was not reelected last week to the DTC. Morris is not a member but was speaking as a proxy.

Johnson is “just one of the nicest, smartest, caring people who really believes that government can actually do something positive for our lives, which is just what we need on the Common Council,” Tina Duryea said.

Donna King called Johnson “one of the hardest working people.”

Johnson said she’d reached out to talk to folks over the last few weeks and “those conversations will stay with me, because through those conversations I learned about how, yes, we have a lot of things in common, but we also district by district have things that we see rather differently.”

Afterwards, she explained to NancyOnNorwalk that she and her partner had bought a house in Cranbury seven years ago and “we never realized how much (Norwalk) would be our home…. in a way that has been just phenomenal for us.”

“I’m really honored to be able to do this for the giving of my time and effort to the city in this way,” she said.

She teaches in NCC’s extended studies program, she said. She is also on the Triangle Community Center Board of Directors and a podcast producer for the Love All Project, according to her LinkedIn resume.

She was excited to be appointed to the Council because “this means that we can really focus in 2020 on the things that matter most to Norwalkers, like equitable education, like development, the way it is a livable, sustainable and really works to protect us,” even with climate change on the horizon, she said.

The evening didn’t go as expected and “it’s a little bit overwhelming to note how this process went down,” she said. “So I really I want to be sure to, to bring that respect and kindness and openness and listen with open ears. And so I know that some people want to feel more welcomed into the party…. I’m kind of ecstatic by the opportunity to serve.”

Latino community continues to be under-represented. AND ELL programs continue to be underfunded. By any statistical measure that is unacceptable. Can someone explain why?

﻿“District B member Ron Banks then spoke of a ‘sense sometimes that not everybody feels like they’re equally involved in all of the processes that are going on.’”

It’s about friends and family with this DTC, and there is obviously a pecking order within its tight little circle. If Ron Banks is feeling left out of the loop as a member, then surely he can imagine how marginalized many of us residents whom the DTC is supposed to be representing have been feeling as a result of Norwalk’s cliquey single party rule. Good luck to Ron Banks. Hopefully, he’ll continue to speak up for Norwalk’s voiceless masses and not get sucked into the vortex which is the extreme left echo chamber. Counterbalance is desperately needed.

New council member at large Dominique Johnson is a co-founder of Norwalk Women Who Vote? Good Grief! Norwalk Women Who Vote, of deceiving misnomer, comes off as an exclusive, sorority like group whose members do not encourage non Democrat women to join, even though the group promotes itself as one for all Norwalk women voters, regardless of affiliation. Considering the number of members of this group who’ve been voted on to the DTC, the group seems to function less as is advertised and more as an incubator for handpicked DTC recruits who will continually be voted in and vote each other in.

With today’s political climate of extreme partisanship segregating our country’s people both nationally and locally, killing any kind of civil discourse between parties, why did Ms. Johnson feel the need to co-found an exclusive group like Norwalk Women Who Vote, when League of Women Voters of Norwalk, a group inclusive of all Norwalk women, regardless of their political affiliation, already existed? Is a partisan group of Democratic women voters who disingenuously label themselves otherwise going backwards progress-wise for ALL women who have a voice and a vote?

Good luck to Dominique Johnson. May she represent all of us women equitably, whether D, R, U or I.