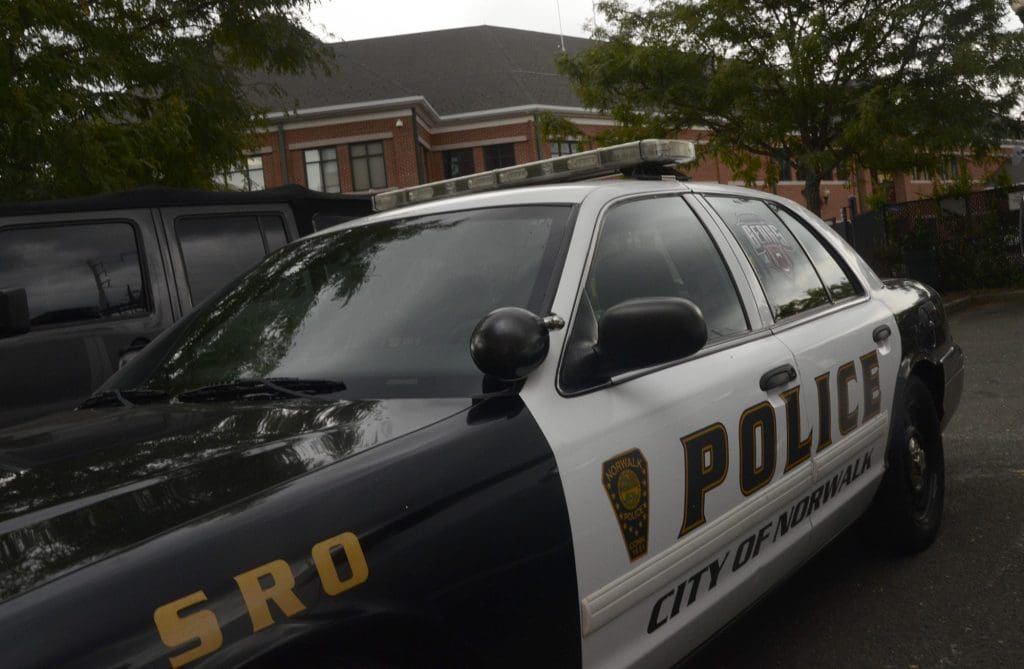 A Norwalk Police cruiser parked next to police headquarters.

Chauncey Moore claimed that six NPD officers unlawfully stopped him, beat him up, and then forced him to have his stomach pumped in search of illegal drugs in April 2014.

Moore barely filed the lawsuit on time nearly three years after the incident, but didn’t include the officers’ names, Deputy Corporation Counsel Jeffry Spahr said Wednesday. This led to Monday’s ultimate dismissal, as the judge did not believe Moore’s claim to have asked for the names before the statute of limitations ran out.

Moore claimed that on April 24, 2014, an NPD supervisor told him to leave Norwalk or be arrested, harassment due to a previous Norwalk arrest. Two days later, he was walking away from a convenience store when two officers jumped out of a squad car and attempted to cuff him. He ran; they gave chase and Tasered him.

Moore claimed they used racial epithets and slurs, and kept Tasing him although he was complying. His story continues with officers laughing at him 10 minutes later, after they’d kicked him, stomped him and piled on more verbal abuse, then having him transported to Norwalk Hospital to get his stomach pumped. This was done against his will, after he denied taking drugs.

Spahr said the case had a “convoluted” legal history.

Moore filed the lawsuit on April 23, 2017, representing himself.  This was right before the Statute of Limitations ran out.

“Right as the garage door was coming down, he got on the skateboard and slid underneath,” Spahr said.

The court appointed an attorney to represent Moore and ordered that he provide the names of the officers. That needed to be done within a certain period of time and the deadline was missed.

The request for names came in after the Statute had run out, Spahr said. The attorney was no longer on the case, “stopped practicing law” or “was moving, something like that.”

Moore claimed that the attorney hadn’t told him about the name issue, according to Spahr. Moore said that if the attorney had asked, he could have proved that he had sent letters seeking their names.

The judge had dismissed the case but reopened it to allow Moore to present evidence in court, Spahr said.

Moore testified “that while serving time in prison he had written request letters to the Norwalk police department in January, February, and March 2017. He stated that he did not have copies of these letters because they had been taken from him when he had been transferred to different prisons,” Judge Jeffrey Alker Meyer wrote in Monday’s decision.

Iliana Navarro, former Records Division Clerk, testified that Norwalk had no record of receiving any letter or other information request from Moore prior to May 2017,” Meyer wrote.

“She kept these copious records, accounting every which way, cross referencing, you know, six ways to Sunday as to who filed that FOIA request, how it was processed, when it was processed, you know, the whole thing,” Spahr said. “So she was able to show that yes, we did get a request for May. Yes, it was processed and sent out to him in June. But no, our records do absolutely do not show that he ever sent a request in January, February or March.”

Under cross examination, Spahr asked Moore if he had tried to get the names from the first attorney, who had police records, Spahr said. Moore said he hadn’t done that.

“The issue here was whether or not he had exercised due diligence and trying to discern the identities of the police officers,” but Moore was instead blaming police, Spahr said.

While the case was dismissed on a technicality, “the police don’t have any ability to tell health officials and hospital personnel to pump somebody’s stomach,” Spahr said. “What he did say though in the course of the hearing, when he was under oath, in the spring of 2017…at that point he was he was having auditory hallucinations.”

Spahr asked, if someone was treated that badly, why would they wait three years to file a lawsuit?

“If you feel that you’ve been roughed up …that we did something wrong, you’re going to wait until the third year? … You’re not, you’re going to file it,” Spahr said. “I think the proof is in the pudding as far as the fact that he just sat on it.”

This is the third time in the last three months that Spahr has announced a lawsuit against Norwalk Police had been dismissed.
Spahr said there are two others in process.

James Burnes, who is incarcerated in Bridgeport, in a complaint he filed himself in September 2019 alleges excessive force. He states that on July 19, 2018, four officers, including Mark Suda, arrested him on Nostrum Avenue. He had run, been caught and while he was on the ground, he was punched and narcotics were placed near his face. Burnes said he ingested the narcotics, and the officers punched him further, demanding that he spit the drugs out. He was accused of biting an officer but had his mouth shut.

A reply filed on behalf of Suda states that Burnes had a motorcycle helmet on as he fought back after being tackled, and a Taser had little effect. He was cuffed and Suda found crack cocaine in his pockets, but Burnes caused Suda to drop the packets. Burnes attempted to destroy the evidence by swallowing it. Suda was bit while removing the packets from Burnes mouth and needed hospital treatment.

New Canaan resident Christopher Paladino, in a complaint filed by Attorney Robert Berke in February, alleges false arrest on Sept. 30, 2018. Paladino was stopped for motor vehicle violations, admitted to having marijuana and a pistol, for which he had a permit, the complaint states.

He was ticketed but Officers Anthony Delpino and Andrew Roncinske obtained an arrest warrant by falsely accusing him of having an “extensive narcotics history” and not having a valid gun permit, the complaint states. The case was dismissed in October 2019.

Spahr moved to dismiss eight of the 10 charges in August. Spahr claims the officers have governmental immunity and were not aware of exculpatory evidence.

This will be the new norm thanks to the new police accountability law touted by Duff. Only it will be twice as bad as not only will the City have to keep getting the cases dismissed, but the individual officers will too. This is the type of nonsense that gets filed all the time. Thankfully Norwalk has Jeff Spahr, who is willing to fight and get these dismissed outright. Many towns and Cities will throw thousands of dollars at the criminals filing because it is faster and cheaper to make them go away than it is to pay for the time and effort for everyone to fight the case and have it thrown out. Criminals know this and that is why they file these ridiculous claims.