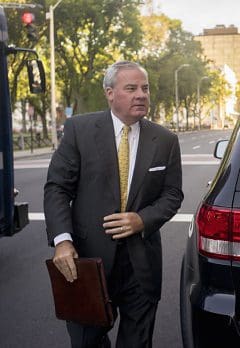 Rowland’s attorneys made the request Friday claiming that the government didn’t turn over all of the information it should have based on details disclosed in Lisa Wilson-Foley’s Dec. 29 sentencing memo.

“Ms. Wilson-Foley informed the government prior to her plea that Mr. Foley and Brian Bedard had repeatedly reassured her that Mr. Rowland was performing legitimate work for Apple,” Rowland’s attorney, Reid Weingarten, wrote in the letter.  “Ms. Wilson-Foley claims that, based upon these facts, it was not until 2012 — when she says she learned that Mr. Rowland’s payments were ‘not all for true value’ for work at Apple — that she joined the alleged conspiracy.”