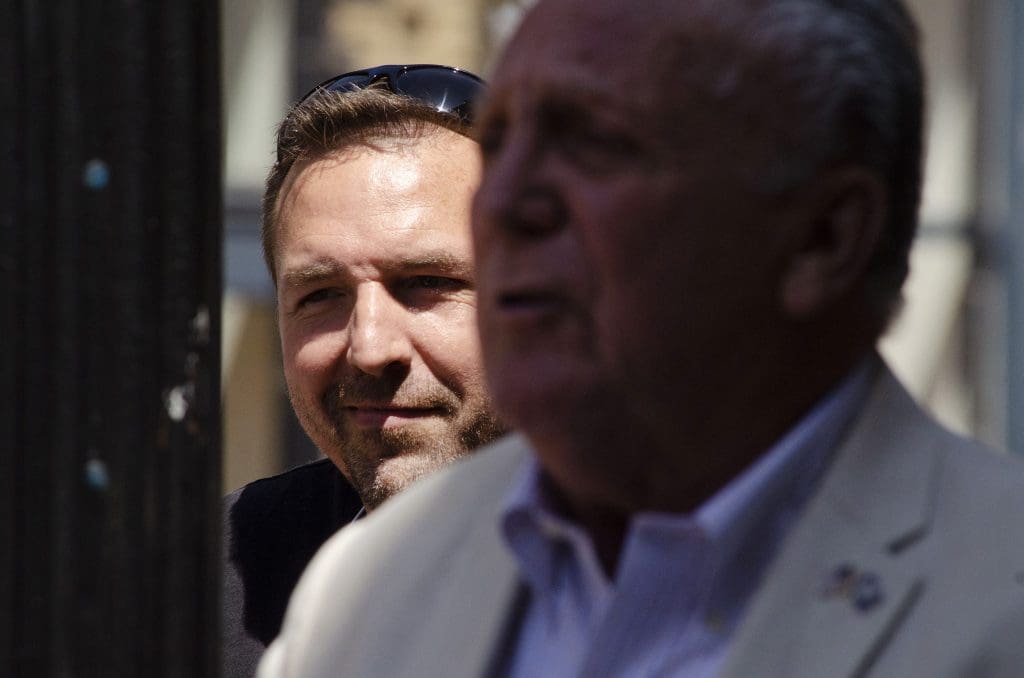 NORWALK, Conn. — Jason Milligan is claiming victory in the latest ruling from the Court in the lawsuit filed against him by the Norwalk Redevelopment Agency and the City.

Judge Sheila Ozalis ruled against the plaintiffs’ motion for summary judgement, meaning she declined to decide the case based on the evidence, and it’s proceeding to a jury trial unless both sides agree to a settlement.

Milligan described the decision as Ozalis ruling “against him on all counts.” The “him” is Norwalk Corporation Counsel Mario Coppola.

The ruling came as the plaintiffs settle with the other remaining defendant in the case, Richard Olson, who in 2018 sold Milligan properties that were slated to become part of Wall Street Place phases II and III. The five parcels included the former Leonard Street municipal parking lot, which had been granted to Olson’s POKO Partners in exchange for the promised multi-use development and carried legal restrictions defined in a Land Disposition Agreement (LDA), including a promise to provide public parking spaces.

The plaintiffs say the sale violated the LDA as it stipulated that the property could not be transferred without Redevelopment Agency approval. Milligan maintains that the LDA is invalid for a host of reasons.

Mayor Harry Rilling recently characterized the lawsuit as designed to not allow “a developer to try and steal public property.”

Olson was being sued personally and under several legal entities, all tied to POKO Partners. He has admitted the sale was improper, according to a statement released by Norwalk Director of Communications Michelle Woods Matthews:

“The public parties (The City of Norwalk, Redevelopment Agency et al.) are pleased to have resolved their case against the defendants Mr. Olson and the Poko entities. As part of the settlement, these defendants admit their improper sale of the property to Mr. Milligan in violation of the taxpayers’ legal rights. This settlement will simplify the public parties’ case against Mr. Milligan at trial.

“This settlement occurred simultaneously to the Court’s recent ruling denying the public parties’ motion for summary judgment. This simply means that there are disputed facts that must be heard by a jury. The City of Norwalk is confident that it will prevail in Court in its effort to end this saga. The Court’s recent ruling does not impact the public parties’ likelihood of success at trial in any way nor will it delay when the trial will occur.”

In 2020, Milligan said, “It is a well-known fact that summary judgement is seldom granted in the state of Connecticut.” A lawyer asked by NancyOnNorwalk for comment said he generally agrees that it’s difficult to win a motion for summary judgment in Connecticut state courts.

After Ozalis ruling Wednesday, Milligan wrote, “There will be a jury trial to decide the case. Who is going to represent the city in the trial? Who is going to pay for it? What do you get if you win? How long will it take to get through the trial and all the appeals? Years!!!”

He alleged that Coppola “hyped the summary judgement to everyone” and “told the world that he was going to win Summary Judgement.” Milligan said, “It actually kept settlement discussions from being productive because many believed Mario.”

Coppola never said that, according to Rilling, who said the Court holds the highest standards for summary judgment proceedings and no one on the City’s team expected to prevail.

“It’s been an unfortunate pattern that Mr. Milligan has continuously made false claims about me,” Coppola said. “His statements regarding my confidential advice to my clients is not accurate.”

Ozalis did grant summary judgement to one defendant. Pamela Olson, Ken Olson’s widow and estate executrix, was pulled into the fray in May 2021 when the plaintiffs added her as a defendant under the “veil piercing” doctrine. Ozalis dismissed the case in August on the grounds that too much time had passed since the lawsuit was filed.

The plaintiffs have appealed that ruling.

In mid-October, before Olson agreed to settle, Milligan said, “The city wasted hundreds of thousands of dollars, and nearly a year and a half chasing her while their case against me sat largely idle. Now they want to chase her for another year on appeal while my case will continue to sit idle. Clearly, they believe she and others are the guilty party, not me. They have stated that the widow is an ‘indispensable party’ to the lawsuit.”

Although a trial is scheduled for March, Milligan’s attorney, David Rubin, recently warned that the lawsuit could continue for an addition year given the time the appeal would take. He also said that the plaintiffs face risks in having the case go to a jury.

I am glad that the city has starting calling the sale improper instead of illegal.

The entire POKO project was improper including the action and inaction by the city.

The real question is why has a rogue attorney been able to improperly begin a lawsuit without a council vote, or any input for that matter?

That improper lawsuit combined with a few lies poisoned the well which has made it difficult to find a resolution.

Remove Mario and his ego from the equation and this lawsuit gets quickly resolved.

Mario does not own Norwalk but he sure acts like it.

Why is he not asked to recuse himself?

He recused himself from the tax software situation recently

He recently stated that he is busting at the seams.

Bring in Jeff Spahr from the bull pen?? Jeff was a great pitcher who was born and raised in Norwalk.

I’ve been following this back and forth for a long time and the city is completely ridiculous on this I’m sure the taxpayers would have saved money by now had the city walked away from this entire situation and allowed to developer such as Milligan to do what he wishes within the confines of zoning law. I quite honestly don’t understand why the city is willing to waste money like this on Wall Street and the 25 years I’ve been around Norwalk in the 17 years I’ve lived here Wall Street has never been a center of anything. I go there I hit up the bank I might stop in a couple of the shops when my three sons was there I went there a lot more and also one of the butcher was there I went there a lot more but it’s a road on the decline and the city’s actions have been detrimental to the usage of that area Milligan and a couple of others have the responsibility of holding it together and improving it which they’ve been doing. I kind of want this case to go to trial because I want to know what type of treachery public leaders have been doing with public money because none of this makes any sense. Even with the tyvek Temple they could have simply Hired Milligan’s company to finish the project and I’m sure he would have had some intelligent changes instead they’ve gone for a half decade long lawsuit while the building decays

I’m just curious how the City thinks that it can actually win a jury trial. Milligan may not be the most sympathetic defendant in the world, but the City isn’t a sympathetic plaintiff here either.

A quick application of game theory would have told the City that Jason is really the only one who stands to benefit from a trial. If he loses, he simply doesn’t get his property, and loses a bunch of legal fees, which is the exact same outcome he’d have had if he never pursued legal action in the first place. If he wins, he gets his way and makes a bunch of money. In a jury trial of two unsympathetic parties, that’s a 50/50 proposition, so the “Net Expected Value” is positive.

The City, on the other hand, never stood to benefit from Jason losing. Sure, some legal fees might be recouped, but *something* was going to get done with POKO either way – if Jason wins, he finishes the project, and if he loses, the City goes ahead with whichever shady developer they’ve lined up to finish POKO for them. The project was always going to get done, and it’s not like Jason was going to bilk the City out of any more money than they’ve happily handed over to Spinnaker and others. So the Net Expected Value for the City is maybe not zero, but it’s a lot less than Jason’s, by several orders of magnitude.

It ONLY makes sense for the City to keep fighting IF their pre-selected favorite was lined up because they’d promised kickbacks to Harry, Inc. And the thing is, a trial will only risk the public finding out more about whatever the city’s shadowy original plan was.

The City’s smartest move would be to settle.

Rilling, who said “the Court holds the highest standards for summary judgment proceedings and no one on the City’s team expected to prevail.”

No one on the City’s team expect to prevail?

Why on earth would you spend all those years and all that money on summary judgement?

It took years!
It costs hundreds of thousands $$$!

And the Mayor knew the city was going to lose?

In August Judge Ozalis warned Joe Williams that if they continued to pursue summary judgement that the trial would have to be moved.

The POKO saga is a case study in how to make poor decisions and waste money.