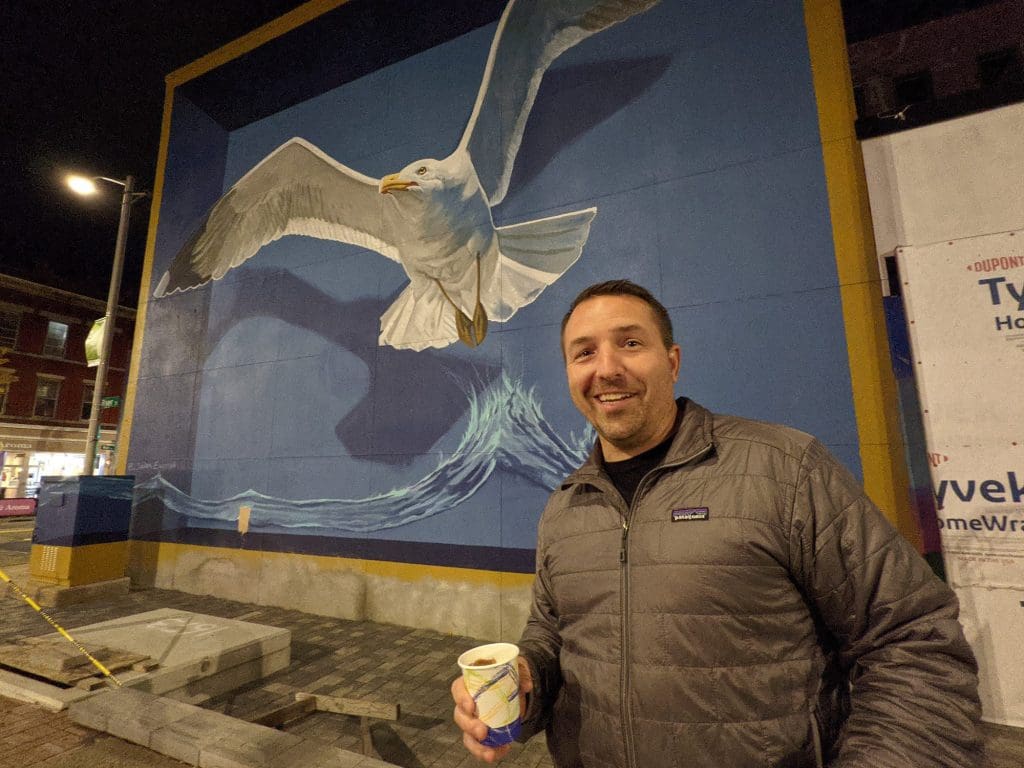 Real estate broker Jason Milligan in November, outside one of the approximately 40 properties he owns in the Wall Street area.

Milligan lost the motion for summary judgment, a request that the judge rule on the case rather than allow it to go to trial, filed by Redevelopment Agency in October. Ozalis ruled that Milligan’s arguments were invalid, so case closed.

It’s not over for Milligan. “My legal team and I feel very confident on our appeal,” he said.

Milligan, in December 2020, after losing multiple legal motions like this one, said, “It is a well-known fact that summary judgement is seldom granted in the state of Connecticut.”

On Wednesday, Milligan called the win for Redevelopment “a minor victory in a very long battle.”

On Thursday, Attorney Dan Elliot, who represents the Redevelopment Agency, released a statement.

“We are very proud of the professionals at the Redevelopment Agency and all the work that they do for the City of Norwalk.  We are delighted by the Court’s decision, which has fully disposed of Mr. Milligan’s claims against the Agency.  We are confident that the Court’s very detailed and thorough decision will be upheld on appeal, should Mr. Milligan choose to continue pursuing litigation,” Elliot said.

Milligan, under the legal entity IJ Group, filed the legal challenge to the Wall/West neighborhood plan in April 2019, alleging that due process was not followed in the plan’s creation and approval and accusing the City and the Redevelopment Agency of fraud. He also made accusations against consulting firms the Redevelopment Agency had hired to assist in the creation of the plan, pleading a total 16 counts.

IJ Group is said in court documents to have two members: Milligan and Daniel Groff, both New Canaan residents. Milligan has testified that Groff is a silent partner.

Milligan withdrew his claims against the City two months after filing the lawsuit. Ozalis explains in Wednesday’s ruling that the only count left in the lawsuit was the one alleging that the redevelopment plan is invalid. All the other counts had been stricken or withdrawn. 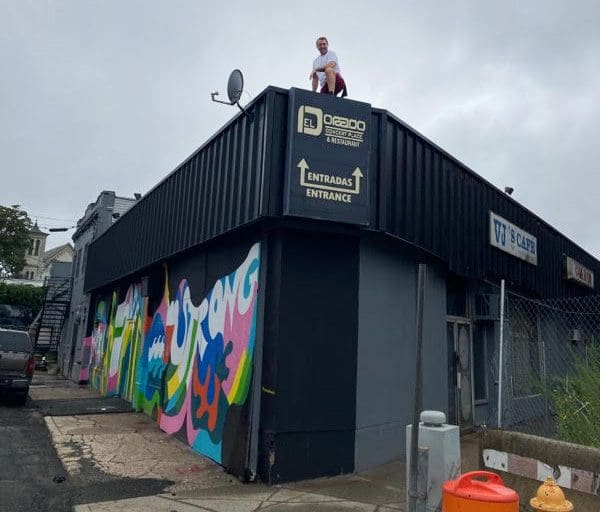 Jason Milligan on of top the former El Dorado nightclub in 2020. He has since demolished that part of the building. (Contributed)

Ozalis, in the 33-page decision, meticulously details Milligan’s arguments and declares them invalid. She mentions Milligan’s assertion in December 2019 that former Norwalk Director of Community Development Planning Tami Strauss should “hire a good lawyer and prepare” herself because she had “a lot of explaining to do!” Ozalis said she is unaware of “any criminal investigation into Strauss’ conduct that would result in charges as to which she might be found ‘guilty.’”

In discussing Milligan’s claim that he was denied his right to public participation in the plan, Ozalis recounts evidence that Milligan participated in a monthly meeting regarding its development in July 2018, before IJ Group bought 67 and 69 Wall St., the properties he claims are damaged by the plan. He spoke frequently with Strauss throughout the plan’s development process, the evidence shows, according to Ozalis.

Ozalis states that Milligan failed to “present the necessary factual predicate” that Redevelopment “acted unreasonably, in bad faith or abused its power in finding a lawful redevelopment area.”

For a judge to grant summary judgment, the important facts must be established, and the decision made on the legal merits, a local lawyer has explained. The lawyer generally agreed that it’s difficult to win a motion for summary judgment in Connecticut state courts.

“The Redevelopment Agency summary judgement is the opposite of limited to just the law. It reads like a novel with heroes and villains and pages and pages of unrelated information,” Milligan said in November.

Milligan presented his side of the story in December when he replied to Redevelopment’s motion. He said no one could read it and “walk away saying the city & Agency acted properly… Nothing to see here.”

On Wednesday, after Ozalis ruled against him, he continued attacking the motion’s legitimacy.

For starters, the appeal will argue “that there are a tremendous number of facts in dispute,” Milligan wrote.

He named several alleged “facts in dispute.” The “biggest” ones, he said, are “whether the Redevelopment Agency complied with the statute.”

“Is potential lead paint equivalent to ‘containing a defect’ or must a building actually CONTAIN lead paint? And / OR must there actually be significant lead paint in a residential building where children are present that is in a dangerous condition?” Milligan wrote.

Consultants “concluded that 147 buildings of the 389 properties in the redevelopment area were suspected of containing lead paint,” she wrote.

The statute doesn’t say anything about lead paint but instead says “must ‘CONTAIN’ one or more building defects,” Milligan wrote. “The RDA or their consultants never actually ever tested for lead which is a very quick, easy and inexpensive process. It takes minutes to scan an entire building with a special laser.”

He wrote, “My legal team and I feel very confident on our appeal. The most unfortunate part of the ruling is the amount of time that will be added to the lawsuits.”

Milligan is being sued by the City and Redevelopment Agency over his 2018 purchase of POKO properties that were slated to become part of the Wall Street Place development.

“Now team Mario is going to feel even more emboldened by this ruling, but the truth is that nothing really changes and we still have years of litigation head of us,” Milligan wrote Wednesday. “The only people winning in long protracted litigation are the attorneys. Everyone else loses.”

Corporation Counsel Mario Coppola spoke about the “POKO lawsuit” in March while discussing the legal department’s budget with the Board of Estimate and Taxation.

The defendants are “pretty much doing everything possible to delay, delay, delay,” Coppola said. “So, we could be talking about this in 2024.”

He also said that if the City prevails, “there’s going to be significant funds that come to the City.”

The city’s needless, drawn-out truculence in this matter is an embarrassment. We should be grateful for Milligan’s investment in reviving Wall Street – and I mean investment in more than just the financial sense. As a longtime city resident and taxpayer, I have to say it’s frustrating and a real shame.

Does this win the city anything?
No.

Should we be fighting in court at all?
No.

The people that benefit from constant long lawsuits are the lawyers! They love lawsuits. They are making millions. Funded with taxpayer money that should be going for much more worthy causes.

Sticking with the sports reference. I believe that we all play for team Norwalk. Harry is our head coach.

I am an all star player. I score lots and lots of goals. I don’t do it the coaches way and that infuriates him.

Make no mistake though. All my goals count for Norwalk on the scoreboard!

I love this city. I am trying to make it better. I have owned and operated my business here for 20 years.

I am hoping that some of my teammates to get coach to check the scoreboard. I am helping Norwalk win! I am helping Wall Street win!

Don’t punish or bench am all star. Keep him on the field. Find a way to help him score more and then enjoy winning together.

*Rumor has it your were a decent baseball coach in your prime.

Mr Milligan, please release the properties in dispute so Norwalk can move forward. You will still have so much property here, and can be a big part of the Norwalk Renaissance. Norwalk needs to move on from this dispute, not stay mired in years of litigation. As you say, that isn’t good for anyone involved.

@Barbara what do you mean release the properties?

I have to say that easily this area is the biggest disaster under the Mayor’s tenure. You never see him on Wall Street with his wife taking pictures or cutting ribbons. I am sure Jason Milligan isnt always the easiest to work with either. However, if a private investor is willing to sink their own money into helping revive the area then lets sit down like adults and figure things out. This area has suffered for so long and it is a shame. City hall should invite him in and have discussions about what we can do to work together for the good of Norwalk. be transparent with us residents. Yet, we drive by and look at the Tyvek fall off the building year after year. Its totally embarassing. How come there is no press conference with Himes or Blumenthal on Wall Street? Because it is disgusting in its current state. I feel for the businesses trying to make something of it with no help from our local government. Also, the nerve to charge you to park there to patronize a business in a town we pay taxes. Harry said during the election that the businesses wanted the parking to not be free. Yeah ok Harry. I bet you sell sand in Arizona as a side job too. Please dont run again!! Poor Norwalk. Take your double pension and bounce please!

@Jason – Don’t “release” a single square inch of property to the City of Norwalk! It’s proven they have no clue when it comes to developing property. They’d only give it away so a developer could sell it for a profit. Example – Properties they took using eminent domain were handed over to Seligson allowing them to assemble all the property the mall sits on. Once Seligson had everything, they sold a much more valuable group of properties to GGP for a massive profit.

Perhaps Mr Milligan and Mr Groff should consider building apartments and other types of affordable housing in New Canaan,their hometown,where this type of development is much needed. Or perhaps they already are.

To be fair, the Mayor *was* down on Wall Street (well, the corner of Wall & River) just a few weeks ago at Byron’s bakery’s open house. But that’s the only thing I can recall in recent history.

yes he did Mitch. Boy he really knows Norwalk!