NORWALK, Conn. — It’s a wonderful thing that Juneteenth has become a federal holiday as more people will understand the suffering that African Americans went through to get society to where it is today, said State Sen. Patricia Billie Miller (D-27) Monday.

The sentiment was echoed by other speakers at a flag raising hosted by State Senate Majority Leader Bob Duff (D-25).

“I consider this to be an opportunity for us as people, and as African Americans, to educate our children about our paths, because there’s so much more to be said about the struggle, where we come from,” Common Council member Darlene Young (D-District B) said.

“Juneteenth (short for ‘June Nineteenth’) marks the day when federal troops arrived in Galveston, Texas in 1865 to take control of the state and ensure that all enslaved people be freed. The troops’ arrival came a full two and a half years after the signing of the Emancipation Proclamation,” History.com states. “Juneteenth honors the end to slavery in the United States and is considered the longest-running African American holiday. On June 17, 2021, it officially became a federal holiday.”

Board of Education member Sherelle Harris said some people think of Juneteenth as “separatist.”

“Black history is American history. So I’m very grateful for the inclusion,” Harris said. “And hopefully everybody will join on whether it’s Black history, Jewish history, Latin history.”

In voting to make Juneteenth a national holiday, House Democrats had “used their majority to balkanize our country and fuel separatism by creating a race-based ‘Independence Day,’” U.S. Rep Tom Tiffany (WI-07) said in June 2021, according to the New York Times. Tiffany was one of 14 House Republicans to vote against the measure after it sailed through the Senate without opposition. 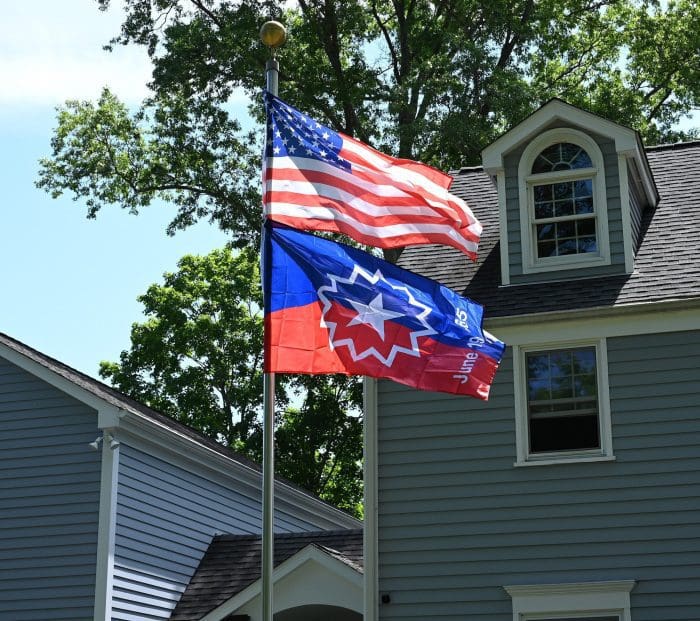 “Juneteenth commemorates the abolition of slavery in 1865. Some conservatives who opposed its establishment as a national holiday argue it might somehow detract from Independence Day on July 4, or promote left-wing identity politics. For their part, some on the left may view it as a condemnation of America’s history of slavery and racism, or even a celebration of black nationalism,” Ilya Somin wrote in an opinion on Reason.com. “In reality, however, the abolition of slavery was the greatest achievement of the universal principles underlying the American Revolution, and a rebuke to ethnic nationalism and separatism.”

George Floyd’s death in 2020 helped make Juneteenth a federal holiday, as “regular people” made their voice heard, First Taxing District Commissioner Jalin Sead said Monday. Just like Martin Luther King Day, “it’s not a day off. But it’s a ‘day on’ for us to remember what we have to do.”

Young suggested that Juneteenth is “an opportunity for the truth” as a “learning lesson for our school system.” 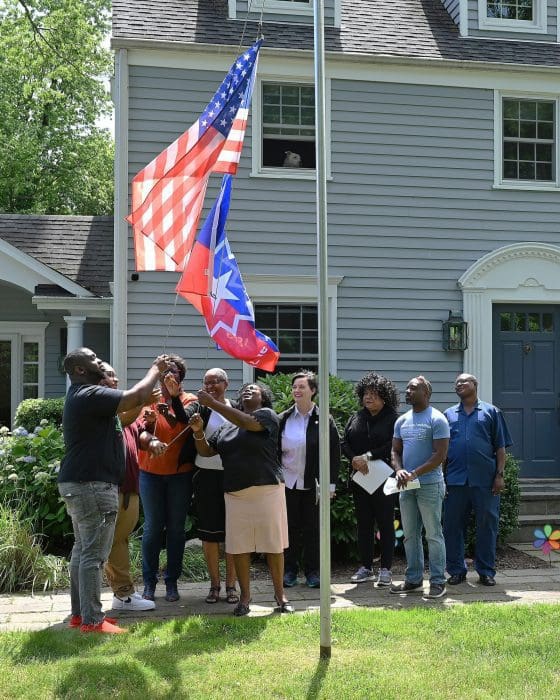 “Without these days that are named, we risk falling to the pressures to not tell the truth of history,” replied Norwalk Federation of Teachers President Mary Yordon.

Given that there were slaves who weren’t told about their freedom, “It’s about knowing the truth. It’s one thing to have it on paper, it’s another thing to have freedom in reality. So people need to know their rights. And we need to make sure that children understand the struggle. It’s our struggle,” Yordon said.

While the focus is on Galveston, “there were so many others” who are lost to history, who didn’t know they were free, another person said.

State Rep. Stephanie Thomas (D-143), who is running for Secretary of State, said she thinks about the people who didn’t know for two years that they were free and people who may have heard a rumor but waited for soldiers to come and set them free.

“I learned that a lot of slave owners in the south moved their slaves to Texas, so that they wouldn’t run the risk that Union soldiers would help the slaves be emancipated,” Thomas said. “…I think, when that day in 1865 did come, I don’t think they ever thought 150 years later a police officer would murder a man, that you couldn’t go to a grocery store without being shot.”

She said, “We have a lot more work to do. And I think about what freedom actually means versus what we think it means. So I think it’s really important for us to remember that freedom is more than something that’s written on paper. It’s what people experience every day.”

The Connecticut legislature made Juneteenth a state holiday, effective next year. Duff said he thought many states haven’t done that.

“I think my grandmother talked about Juneteenth when I was little, but if you ever heard it on the news, it was always a footnote at the end of the newscast or it might be a little article in the paper,” Duff said. “So nobody in my generation ever understood it… it wasn’t a way for us to really understand or grasp what had happened.”

To Yordon’s point, Martin Luther King Day is a path for learning, Duff said. “We wouldn’t have had that opportunity had we not had that day off. And so I think this will be the same for kids as they grow up, just as we do with the Holocaust, as we do with African American history, or other types of history as well. These are important things for all of us to know because we all come from different paths and different backgrounds, and we all need to understand each other’s different paths and backgrounds.”

Now that slavery is receiving more attention will America ever recognize its destruction and cruelty to our Native Peoples ? And their contribution in our early years ?

George Floyd was a criminal and should have nothing to do with this holiday.