NORWALK, Conn. – The Juneteenth rally scheduled for Friday in Veterans Park has been scaled back to a protest due to concerns about COVID-19, according to one of its organizers.

“It is no longer an event,” 5iveFingaz said.

City leaders on both sides of the aisle opposed the rally in the park. It wasn’t sponsored or sanctioned by the City, Mayor Harry Rilling said Wednesday.

“Juneteenth is the oldest nationally celebrated commemoration of the ending of slavery in the United States,” Juneteenth.com states. Dating to 1865, it is celebrated on June 19.

Fliers advertising a Norwalk rally have been circulating, advertising a peaceful event beginning at 5 p.m. Friday in Veterans Park.

“The City of Norwalk cannot issue a permit for the event as the number of anticipated participants would be in violation of the Governor’s Executive Orders. The event organizers did not apply for a permit nor did they provide the required insurance rider,” Rilling said in an email.

He continued, “We recognize the importance of the Juneteenth Holiday and what its’ significance is to our country. However, we are in the midst of a pandemic that has resulted in more than 110,000 deaths in our country. Many states having relaxed restrictions and now reopening, are seeing significant spikes in new cases.” 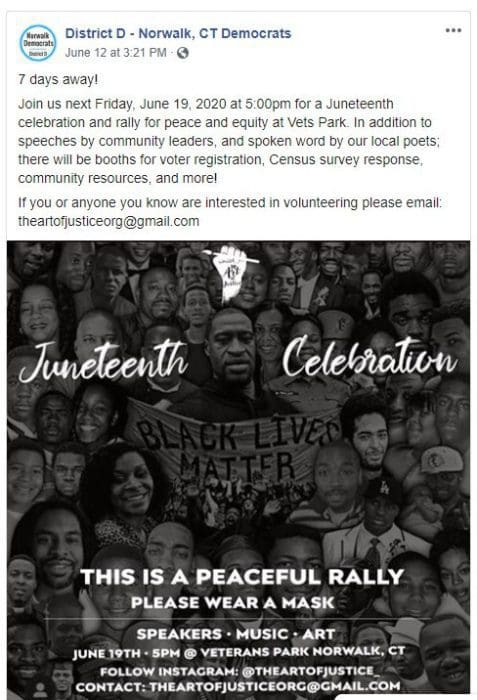 A Norwalk Republican asked Wednesday why Norwalk Democrats would promote a event they know is not permitted. Democratic Town Committee Chairwoman Eloisa Melendez said the DTC has not posted the flier or distributed it by email. A District D leader posted it on that Committee’s Facebook page “based on a belief that the event had all the proper permits.” The post was deleted Wednesday.

Common Council leaders discussed the planned celebration and agreed “that it would serve no purpose to try to prevent the gathering as such an act could lead to a physical confrontation. No one wants that,” Council member Thomas Keegan (R-District D) is quoted as saying in a Republican Town Committee email.

“I have asked individuals involved in the event to not hold it at this time. I have told them they are putting the health and safety of many people in jeopardy,” Rilling said.

“I think a lot of people will show up,” he said Wednesday afternoon. He predicted it would be peaceful and “great.”

Norwalk Police Chief Thomas Kulhawik also said, “we expect the protest to be peaceful based on the description from the organizers and the schedule of events etc.”

5iveFingaz, a Norwalk artist, said this in a late evening email:

“First and foremost, the overarching goal of the Art of Justice ‘Rally’ / Protest is ‘to uplift the community in honor of Juneteenth and encourage a call to action for justice and equity.
“It is not lost on us with the concerns and risk of a pandemic, we are taking the effective precautions to keep our community safe while also elevating the voices of the marginalized.

“I have assembled a Social Justice team called ‘The AOJ’ (The Art of Justice) consisting of 6/7 young adults that are extremely passionate about social justice.

“I have discussed the below concerns with them and they have decided to move Forward with just the protest (Not the event portion). It is no longer an event. It is not our intention to disobey the law but as mentioned anyone has the right to protest.

“The AOJ will scale it back to a simple June 19th protest. There have been several protests in the past several of weeks in Norwalk as well as Fairfield County in general so there shouldn’t be a problem with this one on Friday.

“Our original intentions were to keep the people involved safe and away from the roads and to avoid highway shut downs.

“We have reached out the performers and musicians and have made them aware of the changes.”

Protestors will march to the police station, he said. “I think their original concern was the number of people that may show up. I have since step back and not publicized it as originally planned as to not have too large of crowd.”

I want to make a point clear I am not prejudiced but this event going on during this crisis is an outrage Mister mayor how about our oyster festival how about our fourth of July show how about our car shows fundraisers at calf pasture Beach how about are open-air concerts every Wednesday at calf pasture Beach you do not have my vote mr. Mayor know my family’s nor a lot of the residents of the city of Norwalk this is bull crap Mister mayor if you can allow this stupid event to go on and not let our other festivities that we pay for on the sweat of our brow go on then mr mayor you do not have my vote or my family’s either

@William Hoyt
“You do not want to sound prejudiced???” Well too late. You sure do sound like a whining, prejudice person. “Our,Our,Our” You do realize that Juneteenth is OUR Holiday. Please do your homework on why we celebrate this day. Our Independence Day. We were freed from slavery on June 19,1865. July 4th is not our holiday. Please respect our day as for years we have unknowingly celebrated a day that we were not freed from. We peaceful protest because of people who still do not want to take THEIR KNEE OFF OUR NECKS. PLEASE TAKE YOUR KNEE OFF OUR HOLIDAY. I thought The Oyster Festival, Car and boat shows, concerts are for ALL of us to enjoy. Did something change? Are “we” not welcomed??

What is the meaning?….. Event 😊 Protest😀 Parade😊 walk on the sidewalk or in a park for a good cause😊 ALL ARE “GATHERINGS OF PEOPLE “😊

I have had to acquire insurance and permits for years ? All good causes as this one is.

NO Permit, No insurance ….. NO “GATHERING”. How many people? No one knows.

Are we using the NPD for security? Who pays them?
NPD is even paid for when used for Elections, dirt jobs, Oyster Festival and the list goes on.

Sorry it should be fair all around for the use of City property.

No I am not.As you well know.
Your comment is making you prejudiced. I only stated facts.
Rules are for everyone. You know the rules as much as I do.

I miss the retired WWII Navy man who would stand on East Avenue across from City Hall. Of course, in this woke liberal world we live in, He would be considered a man with white privilege. How did we get to such hatred of this great country. NYC is really going to suffer. 600 plain clothes Cops let go.

That young man was a Navy veteran who fought for our country in Korea. He is on a cane and walker sometimes but he will always n fly that flag and stand for it.
His name is Donald Burrows and I am glad to call him a friend,

You believe this is a good cause, but you don’t support the rally for public health reasons.

Take their kneel. Who are you?
All Americans stand up for the flag .

@Skeptical, I hope you’ll agree that it’s much more important to the cause of social justice, and human rights what a person does when they’re not at a rally then when they just want to join the “summer of love” or a “block party”.

One would have to be living under a rock not to know that this issue is on society’s front burner, and if they need a rally to put them right, they’ll never get there. Just my opinion. So to answer your question, “support” is evident by the way one conducts themselves in daily life.

I like so many others of all races Pay It Forward in our own ways. Celebrate MLK Day, study black history during Black History Month. Practice kindness everyday and Thank God we are all just Humans beings.