Republicans need a do-over on vote for Meek 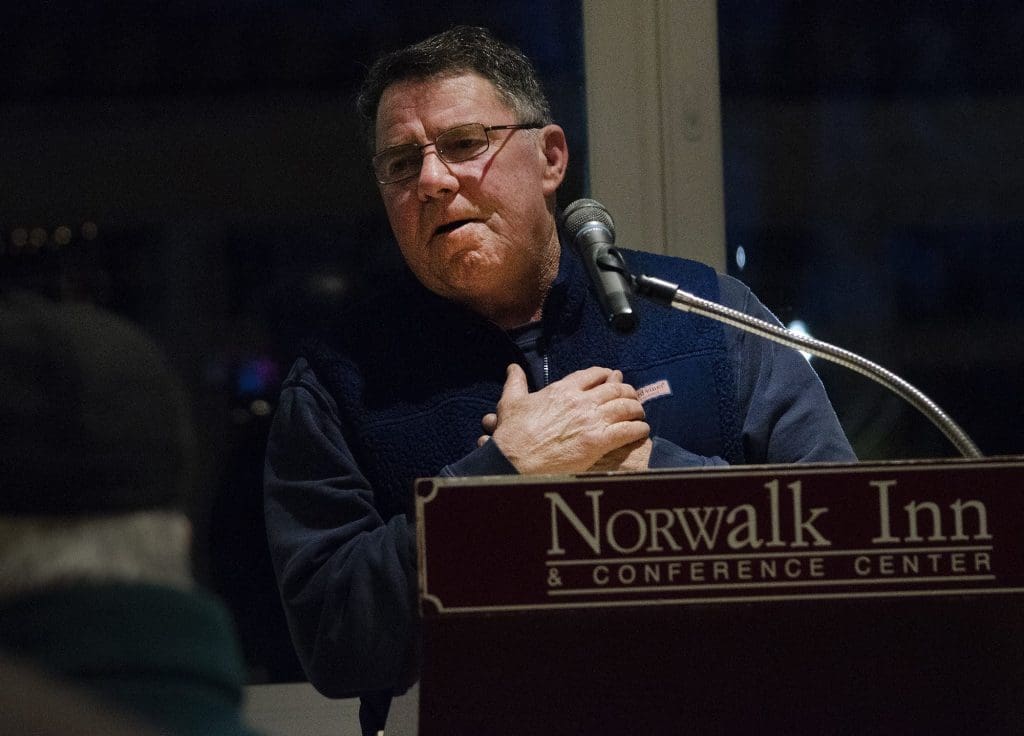 NORWALK, Conn. – Being the only elected Republican in Norwalk is a “daunting task,” Tom Keegan said.

“It is a lot of work. I enjoy it. The only thing that I’m going to miss when I move is the fact that I’m not able to serve (Republican Party members) and the city,” said Keegan, who has been the only Republican Common Council member for three years and who is planning to relocate to southwestern Florida.

As the only Council Republican, Keegan has attended nearly every meeting, not just the Council meeting where final votes are made, but virtually every Committee meeting.

“There are eight different committees on the Common Council. I also serve on four additional subcommittees,” Keegan told District D Republicans last week, explaining the responsibilities his replacement will face.

Council President Tom Livingston (D-District E) said Sunday that the few times Keegan didn’t attend a meeting, “I believe he was in the hospital and the doctors wouldn’t let him call in.”

The hours spent on the volunteer role were a prime feature of the discussion leading up to a vote for a Republican to take the seat come July. Keegan also shared his philosophy for effectiveness when working with 14 Democrats.

“If there’s any kind of recipe for success… it has to do with the ability to get along with others. And there has to be a certain element of trust,” Keegan said.

“I try to get along with everyone,” Keegan said. “For anyone who’s going to do this, for them to be successful, to be heard, you really have to be a good listener. You have to listen to the other team members of the Council. … Because most of the things that we discussed, that we talked about, are things that are going to make the city of Norwalk better.” 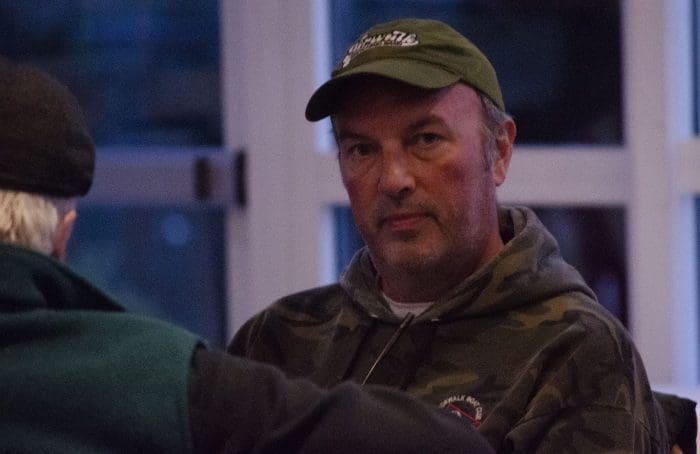 District D went on to choose Bryan Meek, a former Board of Education member who said he “wants to stick a fork in the Mayor’s eye,” “figuratively,” over Carl Dickens, who spoke of “hard work reaching across aisles.”

McQuaid said he has to receive a letter from Keegan advising that he has resigned before the Republicans can pick his replacement. “What council seat is open?” McQuaid asked.

“They’re going to have to do the whole thing over again,” McQuaid said. “Keegan has not resigned yet.” 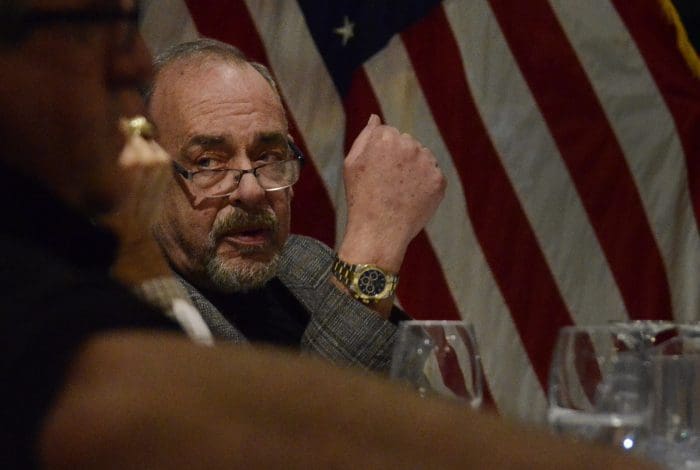 Republicans discussing the issue Tuesday expressed confusion on that point. District D Chairman John Romano said the goal was to have someone shadow Keegan to learn the ropes.

“Honestly, it’s new territory,” Meek said. “We’ve never had the graciousness of someone like Mr. Keegan give us 10 weeks’ notice. I didn’t really understand why we need to replace him when he’s still actively our Council member.”

Notified of McQuaid’s comment via email Saturday, Romano wrote, “Oops. We were just trying to be efficient/ Not an issue. We will be ready when the time comes. Dry run  lol.”

On Tuesday, Dickens used his own experience as a civic volunteer to size up the Council position. It’s a full-time job, as is his role as Oak Hills Park Authority Vice Chairman, his former role of Republican Town Committee Chairman, and Romano’s role as Harbor Management Commission Chairman, he said.

Romano agreed with him that it’s a full-time job. Mark Suda, former RTC Chairman, agreed with the description of time spent.

“I don’t think being elected to public office is something you just volunteer for,” Dickens said. “I know the opposite and I know that people are calling (Keegan), they don’t just call him from District D, he gets calls from all over the city. Because, as I like to do and say the same thing, I live in District D but my office was Norwalk.”

Meek said he’d learned from a mentor that he could be “at the 50,000-foot level,” “scanning enough to know better.”

It’s a question of looking at high-level details and figuring out “where you can ask the questions, dive in, and get the points across.”

Matt Merluzzi had asked to be considered for the seat. But after shadowing Keegan and attending a couple weeks’ worth of meetings, Merluzzi withdrew, citing his passion for being on the Conservation Commission.

“After 3 weeks of attending all the committee meetings that Keegan is on I feel it best that I withdraw my name for contention for this council seat,” Merluzzi wrote April 18 to District D Republicans. “Although part of me fears that I am making a mistake in backing out of this opportunity, I have a greater fear that I will not carry the torch for Keegan in the way necessary to be the only Republican representative in Norwalk.   The hours, and specifically the timing of the hours, are daunting for a single man such as myself.”

“He and I would talk a little bit about what was going on,” Keegan said. “Believe me, you know this: The city of Norwalk has a lot of moving parts. It really does. And it’s complicated. It’s not Mayberry and it’s not Hartford. I get it. It’s something in between.” 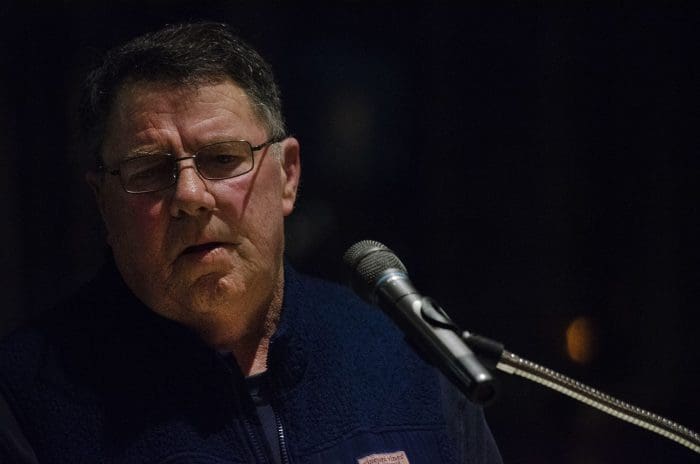 Republicans are “the original conservationists,” Keegan said, mentioning the Ordinance Committee meeting he had just attended, at which pesticides were discussed.

“That is going to be a real game changer for the city,” along with tree conservation efforts, he said.

Although he is weeks away from leaving Norwalk – and his seat on the Council – Keegan is obviously not slacking off. He spoke of recruiting someone to the Fire Commission and about charter revision.

A retired Greenwich police officer, Keegan noted that, unlike Norwalk, Greenwich doesn’t have a Police Commission. “We’re lucky that we have, I think,” he said. “Norwalk has support from the community. I think that anytime something doesn’t go right you’re going to have people come out of the woodwork,” he said. “… I mean, we’ve had our problems, but I think society is our problem.”

“I’ve really enjoyed getting to know and working with Tom these past several years,” Livingston said. “He continually impresses me with his work ethic and dedication to the Council and the City of Norwalk.  (I don’t think he has ever said no to any request to serve or help in any way.)  Above all, he always puts Norwalk and its residents first and doesn’t get caught up in ego or partisan politics.  I am grateful for his service and will miss working with him.”

What will Keegan do as a retiree in Florida?

“I am going to try to get involved in the Republican Party in whatever community I go and live in,” he said. “I am also going to go and hopefully volunteer at the Boys and Girls Club of the area, because everything I needed to know, I learned.”

A civilian shadowing a council member and attending a caucus meeting – albeit a caucus of one. Now that becomes a public meeting, Can you spell FOIA?

Why is this even a story? Bryan Meek was chosen as Tom Keegan’s replacement, giving Bryan the incentives to work with Tom and get up to speed on the current issues. When Mr. Keegan submits his resignation, the District D Republicans can simply ratify their choice with another vote.

As far as “Caucus” issues, there is no official meeting structure with one member. Anyone can meet with a Council person to learn about issues and the only restriction is that the Council member can’t discuss pending lawsuits, individual personnel matters or contract negotiations. The Caucus is the legal way to assemble without allowing the public into the meeting so they can brief one another the issues, count votes for support, or orchestrate strategy for the subsequent Council meeting. If the body allows in a non-member, then the public is also allowed into the meeting, But still, any member of the public is allowed to discuss topics with a Council person anytime they can get together.

The story is that key Republican players went to extraordinary lengths to embarrass the party in the media: Mr. Romano for not knowing the rules and Mr, McQuaid for actually knowing them. Not to mention that Mr, Meek was less than meek when came time to express his intentions about physically assaulting the Mayor for political ends.

Rich your points are spot on. But we all know we have our own Putin of Norwalk and he wants to control who the Republican candidate is. Bryan scares him because he holds people accountable hence why he was so effective on the BOE.