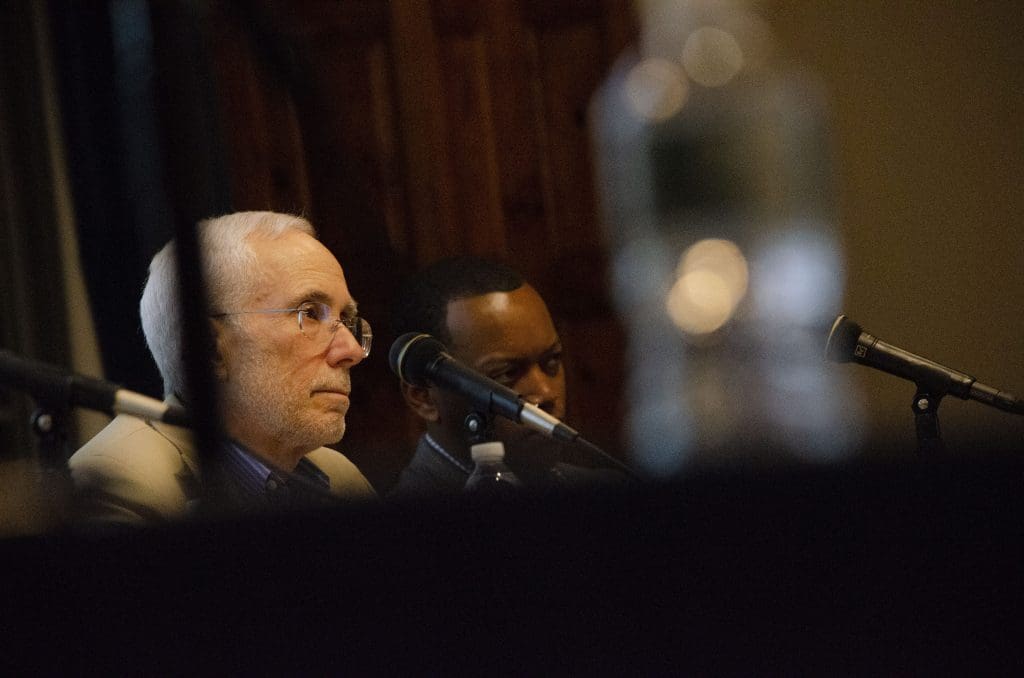 NORWALK, Conn. – The Norwalk Board of Education turmoil has escalated: Bruce Kimmel has resigned.

“I resigned for political, personal and, most of all, health reasons,” Kimmel said in a email to Board of Education members. “I faced a choice: Increase the medication that enables me to breathe, which has some serious side effects, or step down from the board. I chose the latter. Some of you may know that for the last couple of years, I’ve had to deal with two pulmonologists and a cardiologist in NYC, and my allergist in Norwalk. There’s actually nothing wrong – it’s the stress.”

Kimmel was elected as new Chairman just a week ago. He presided over the most contentious Board of Education meeting in recent history and was attempting to deal with ongoing NAACP anger over an email written in June by then-Chairman Mike Barbis.

Kimmel’s resignation was first reported by the Hour and confirmed for NancyOnNorwalk by Mayor Harry Rilling.

“I also stopped by the Registrar of Voters office and changed my party affiliation from D to U. I believe the members of the Norwalk Democratic Party need to do some serious soul searching,” Kimmel said in an email to NancyOnNorwalk.

“Just look at the recent election results – four terms for Mayor Rilling, back-to-back 14 to 1 majorities on the Common Council, and, this year, a clean sweep of open seats on the Board of Ed.  As regards the vacancy created by his departure, we have a number of interested people to fill this seat, and we will work to do so quickly,” Camacho wrote.

Kimmel has had issues with the Democratic Party before. In 2013, Kimmel was endorsed by Republicans for reelection to the Council. He had been caucusing with Republicans but had remained a Democrat.

The Norwalk NAACP has been demanding that Barbis resign. Barbis refuses and there is no legal way for Board members to remove him. The City Hall community room was packed for last week’s BoE meeting, mostly with NAACP members.

Norwalk Branch NAACP President Brenda Penn-Williams said she is shocked to hear that Kimmel has resigned. The NAACP plans to keep up the pressure on Barbis, she said.

“Bruce has devoted so much of himself to our community as both a Councilman and a Board Member.  I thank him for his service,” wrote new Board of Education member Erica DePalma. “He’s been nothing but a wonderful mentor to me and while I wish we could have worked together, it’s important that he prioritize his health.  I’m confident that the rest of the team will continue to work in collaboration toward positive outcomes.”

This story has been updated multiple times.

Regardless of what’s going on, this is a positive development. Getting an actual parent on the board and not a multiple office seeking politician is a good thing.

I had speculated that if the winds changed from the actual achievement of the last two (+) years to another dynamic, Kimmel would fall right in line. I guess now for the second or third time, Bruce chose instead to take his ball and bat and go home. Here’s hoping he stays there.

In these days of political correctness, only the opposition (whomever they are must be silent or will be silenced) These un-necessary race wars are nothing but a distraction and an attempt to gain power and retain power. I think the people being effected the most are caught in a vice, shut down and intimidated. The Spanish speaking/heritage people should let their voices be heard. Not by the old guard, but by new people who have kids in school and are right minded, god fearing good citizens.

I wish Bruce Kimmel well. Norwalk BOE has lost a lot of experience recently. It is my hope that our elected leaders be straight with us on the challenges facing our school system. Instead of working on brochures and propaganda photo-ops,it would be helpful if our state reps start supporting our schools. AND, I’m not talking about $500 PAC donations for the Norwalk Band. It would be great to get an unfiltered view of the challenges we face. It would also be great to hear about all the support we will get from Hartford. If that support doesn’t happen, we need to rethink our voting patterns of the last few years. This is getting scary folks.

Good luck Mr Kimmel ! Take care of you health and be well .

1. why’d he run if he had health issues? I do hope he overcomes them
2. Which political rubber stamp flunkie will Harry put in there?

Bruce, you are one of the good guys. You fought the good fight. Thank you for your service on the Board of Ed. You will be missed.

How pathetic. Bruce Kimmel knew he wasn’t well yet he ran for a very Demanding Education Board then sought leadership of the board? Whose best interest did he have in mind. Certainly not children in Norwalk Public Schools

Really Marjorie, you who don’t have the courage to state your last name? Bruce Kimmel has served this city honorably and diligently for years, never seeking glory for himself. He has been the definition of a selfless public servant. I’m guessing, as he has in the past, that he just wanted to help make a disastrous situation better. Good luck Mr. Kimmel and take care of yourself — you’ve earned it. Thank you for your service.

@Marjorie – I agree with Bob. Health and happiness trumps being a punching bag for ignorant partisans. I look forward to being invited to Bruce’s 100th Birthday Bash. You don’t have to agree with someone’s views to respect their effort. Best of Luck.

FYI Terms on the Board of Education are for four years. Mr. Kimmel did not run in 2019 — he was elected to a four year at-large term in 2017.
Stuart Wells

Thank you Mr. Kimmel for your service on the Board of Ed and previously on the Common Council. I’ve also appreciated your letters in the Hour in the past. I wish you well..Your resignation is a loss to the Board of Ed and to the Norwalk Schools, but I’m happy that you are taking good care of your health.

Cant blame him. What a mess. Hope your health improves Mr Kimmell

Thank you Mr. Kimmel for your years of service on both the Common Council and the Board of Education. Your experience and professionalism will be sorely missed. More importantly, take care of yourself and get healthy.

The Mayor, Council, and DTC threw Mr. Kimmel under the bus leaving him and the BOE members, especially the newly sworn in board members, to take a beating while he and council members were enjoying a dinner down the road. There was no question that the meeting was going to be contentious and out of control since it started off with a march and chanting in the community room during the swearing in of new board members which the Mayor presided over. The room was over capacity. The Mayor should have adjourned the meeting or cleared the room of spectators (most were from out of Norwalk.) Mr. Kimmel should have done the same since he had no control over the meeting. The DTC should only appoint a replacement that has financial expertise and management experience, as well as managing a substantial budget. The school budget is $200 Million. We don’t need any more board members who manage a household budget. The board will be responsible for hiring the next superintendent, figuring out how to educate the influx of migrant students, building new schools to add the additional seats needed for the 1200 students. Certainly a short list of candidates with qualifications should be made public before the final decision is made. The Norwalk citizens and taxpayers have endured enough politics, as usual.

Welcome to the I camp. And best wishes on your health.

Sorry to see Bruce step down. I admire those that put the effort in even if I don’t always agree with their every view and Bruce is someone who puts the effort in.

Lisa H said it all. That meeting should have never been allowed to get out of control the way it did, what an embarrassment for all of Norwalk. Thank you Mr. Kimmel for all you did for Norwalk. The BOE has lost lots of experience and Norwalk has again lost balance in government this past election. Business as usual for a declining Norwalk.

@Al Bore, Agreed! what happened to Donna Smirniotopolous at that meeting, ridiculous! No Norwalker should be stopped from exercising their right to speak due to heckling. People have lost civil behavior.

I hope everyone is ready to watch the Mayor and DTC sell-out taxpayers and the kids of Norwalk once again!

I’m sure whomever is appointed to this vacant role is going to be payback for something.

I wouldn’t be surprised if it’s someone from Brenda Penn-Williams Camp to appease her and the self-serving Dems from District B. Get ready for all sizzle and no substance!

…and for everyone congratulating Kimmel on his departure. The guy abandon you when the City really needed him the most. Now he is leaving the door open for someone else to be appointed, that was NOT elected by the people. If health reasons really were a major concern, he shouldn’t have accepted the chairman appointment to begin with. Resigning and leaving the Democratic party is a cop out. It’s all about ego not the mayor, or DTC or Party Politics. He’s not getting his way so he’s taking his toys and going home.

I wish him good health, peace and sanity now that he has departed.

Really, Lisa H, “We don’t need any more board members who manage a household budget”? That seems to be a swipe at the female Board members who are themselves talented in ways that are absolutely essential to the BOE. The district has people who are paid to manage the budget. The responsibility of the BOE is to ask smart and informed questions and ensure that spending is aligned with our priorities and capacity.

A big loss for Norwalk’s kids. So sorry Bruce’s health was impacted by this whole situation. He has done a remarkable job and will be sorely missed.

Helen. Are you saying Men don’t mange a household budget? Don’t be sexist.

Is this deja vu? Didn’t this happen before with Bruce? Didn’t he leave and switch parties in the past? Is that why rumors abound that he is one of the false Democrats? Is what ai am hearing true…or not?

Mike Barbis will be a barrier to progress as long as he is on the BOE….

Mike Barbie has been one of the prime facilitators of progress the whole time he has been on the BoE.

Mike Barbis has issues with POC that he has made no move to mend, don’t expect any progress with him involved….