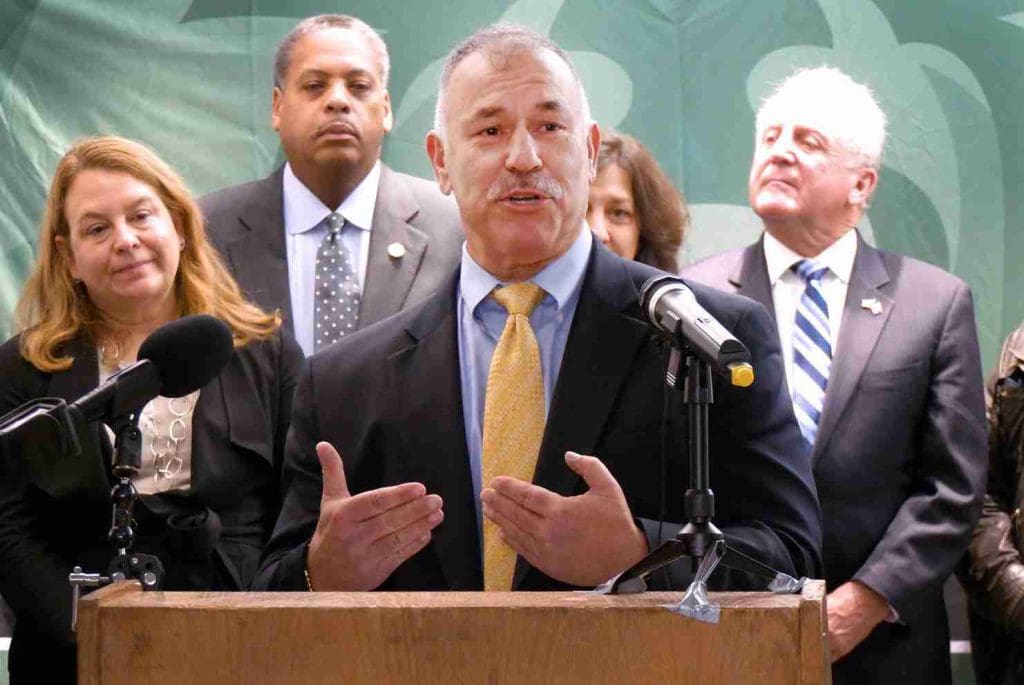 The state Employees’ Review Board has dismissed a grievance filed by Konstantinos, ruling that it had no jurisdiction to hold a hearing on his case because he wasn’t an employee of the state at the time he filed it and they had no authority to rescind his resignation.

In a six-page ruling, the three-member board made it clear it sided with the state’s analysis of the grievance: that Diamantis voluntarily resigned as deputy secretary of the Office of Policy and Management in October 2021 — when he learned he was going to be placed on administrative leave while a federal investigation of the state’s school construction grant program was underway — and therefore had no standing to try and get his job back. Diamantis was also the head of the school grants program at that time.

“During his employment, [Diamantis] filed no appeals with the ERB. Only a month after his resignation did he raise a multitude of allegations in his appeal, some of which may have been viable at the time of his employment,” the decision states.

At a hearing in September before two members of the board, Diamantis’ attorney, Zachary Reiland, argued that the governor’s top lieutenants created an unbearable working environment for him and “set a trap” that forced him to retire rather than fight an investigation into the school construction grant program that he oversaw.

“Mr. Diamantis is claiming that he was constructively fired from his position because a situation was created in which his working conditions were so confrontational, so unbearable,” Reiland said.

But the board rejected Diamantis’ claims of a “hostile work environment.”

“[Diamantis’] claim of a hostile work environment, even if filed with ERB while he was employed, would be invalid,” the decision states. “The ‘hostility’ … was directed at the Secretary of Policy and Management [Melissa] McCaw, an African American, and not [Diamantis]. He was not even in the ‘protected class’ (race). He claims to have been ‘disturbed’ by the alleged racism. This ‘hostility’ does not rise to the level of a ‘constructive discharge’ as a cause for his resignation.”

“We have the ability to appeal to the Superior Court, and I am discussing those options with Mr. Diamantis,” Reiland said.

The Employees’ Review Board was Diamantis’ last option under the state contract.

Documents obtained by the CT Mirror show that Diamantis’ grievance had already been denied in two other closed sessions, before a DAS human resources officer and an arbitrator.

On Oct. 28, Gov. Ned Lamont removed Diamantis from his appointed position as undersecretary at the Office of Policy and Management and suspended him with pay from his position as the director of the Office of School Construction Grants and Review, a classified job with civil service protections.

The move came shortly after reports surfaced that Diamantis’ daughter had gotten a job at then-Chief State’s Attorney Richard Colangelo’s office at the same time that Colangelo was seeking Diamantis’ help in getting raises for himself and other state’s attorneys. A federal investigation into the school grant program that includes projects in Enfield, Manchester, and Tolland, was also underway.

Rather than accept the suspension, Diamantis retired.

Within hours of retiring, Diamantis tried to rescind his retirement, only to have then-DAS Commissioner Josh Geballe deny it because he had resigned “not in good standing.”

“Mr. Diamantis wasn’t demoted. He was not suspended, and he was not dismissed,” Garelick said during the September hearing. “He was placed on paid administrative leave pending investigation. He has not been aggrieved as a result of alleged unlawful discrimination. He chose to resign immediately. That was his decision. In fact, he had been noticed that he could remain on the payroll on paid administrative leave,” Garelick said.

Garelick also said that the state denies all of Diamantis’ allegations of racial discord within the administration or that anyone made his work place “unbearable.”

“If Mr. Diamantis had believed that there was a violation of any sort of workplace rules or regulations or statutes, he could have filed a complaint with the Employees’ Review Board at any point, and he didn’t,” Garelick said. “Instead, he waited until 30 days after he was removed from his appointment as deputy secretary and placed on paid administrative leave.”

In his grievance, Diamantis alleged that then-DAS Commissioner Josh Geballe and Chief of Staff Paul Mounds held a grudge against him for speaking out about the way they and other commissioners treated McCaw. (Geballe’s mother, Shelley Geballe, a lawyer and professor of public health at Yale, is a founding board member of the nonprofit Connecticut News Project Inc., operator of CTMirror.org.)

McCaw has since left her OPM job and is now the town of East Hartford Finance Director.

Diamantis describes secretly listening, at McCaw’s request, to Zoom meetings with other commissioners and state officials so he could “witness the treatment she was receiving.”

The grievance describes another Zoom meeting among state commissioners where McCaw addressed an unnamed commissioner’s “abusive and disrespectful behavior toward the Secretary” and charged it “was rooted in racial discrimination/animus.”

Diamantis’ initial complaint goes into detail about his last day as a state employee — Oct. 28, 2021.

Diamantis said he was at the UConn Health Center with his gravely ill mother when McCaw called and asked him to come to her office. When he arrived, McCaw informed him that he was immediately terminated from his appointed position as OPM’s deputy secretary and that he was being placed on paid administrative leave from his classified position as director of the Office of School Construction Grants pending an internal investigation.

Diamantis had held the dual positions for nearly two years.

McCaw told him that the misconduct investigation pertained to his daughter’s hiring as an executive assistant to the Chief State’s Attorney and that it was an “improper quid pro quo” arrangement, in which the Chief State’s Attorney would receive approval of a beneficial salary action by OPM and his daughter would receive the executive assistant position. Diamantis claims the combination of his mother’s illness, the accusations made against him and his potential termination left him distraught and emotionally compromised.

An hour later, he met with OPM’s human resources officer to discuss which retirement benefits and possible payouts he would be owed depending on whether he retired or was fired.

The grievance said the decision to resign “cannot be separated from the surrounding circumstances. He was distraught, confused and overwhelmed by the fact that his 25 years of public service had inexplicably unraveled in less than two hours.”