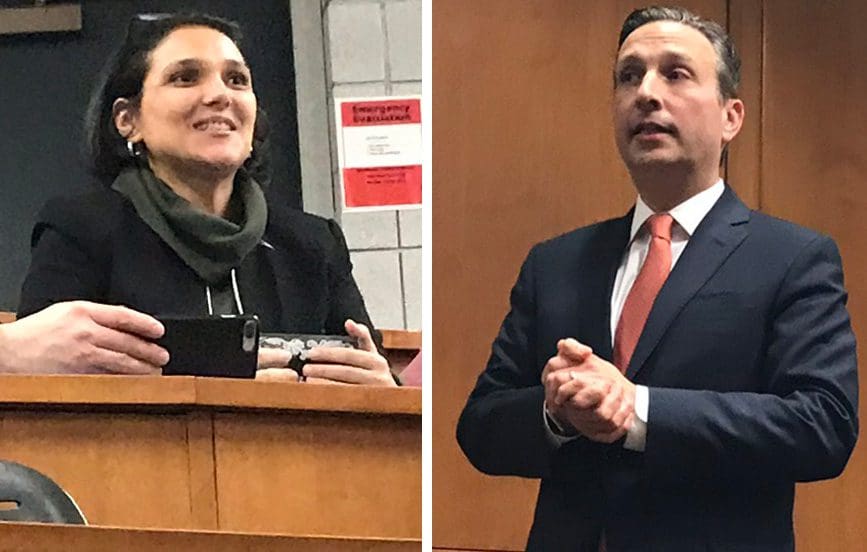 The Republican candidate’s campaign website features a list of five issues spelled out in written form. Only one is elaborated on via video: an “expert insight series” offering “perspective on the virus from a non-political point of view can put us on a path that saves lives while preparing us to return to normal.”

A Google search turns up multiple entries relating to Kousidis’ objections to state mandated vaccinations, and no other topics. Although some call the candidate an “antivaxxer,” Kousidis said in a Sunday email, “I am not anti-vaccination.”

Her views on the topic put her in square opposition to Duff, who has worked – unsuccessfully at this point – to ban religious exemptions to mandatory immunizations in Connecticut. 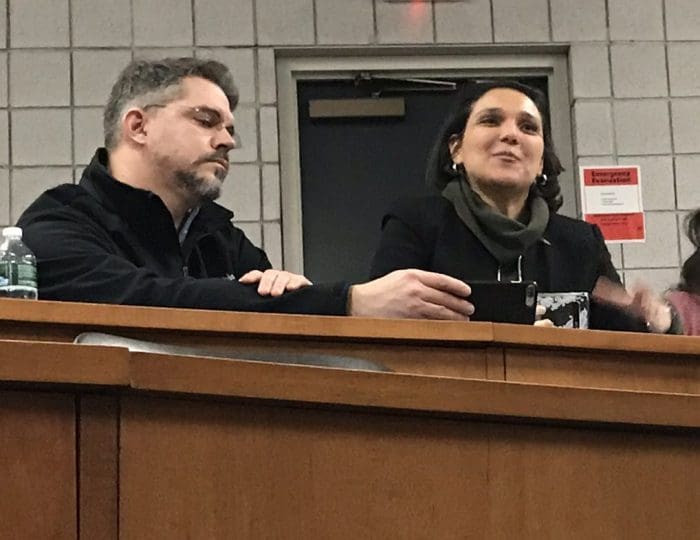 Kousidis confronted Duff about this at a January town hall, where she prefaced her remarks by cordially thanking him for visiting the school she teaches at, and saying “We don’t always agree on every issue, but I still appreciate all the work that you do. I know that you work hard and your heart is in it,” a contrast to her comments to the Republican Town Committee in April, when she called Duff a “horrible human being” and a “terrible leader.”

NancyOnNorwalk asked Kousidis if anything had happened between January and April to change her opinion about Duff. She didn’t answer the question.

It’s unclear where Duff visited her “teaching,” as multiple sources say she works at Rippowam Middle School in Stamford and neither Kousidis nor Duff answered that question.

Kousidis was at the January legislative town hall representing Norwalk families who were concerned about the bill to remove the religious exemption to vaccinations, she said at the time, quoting statistics offered by then-Gov. Jodi Rell in 2003 that suggested Connecticut led the nation in immunization rates. 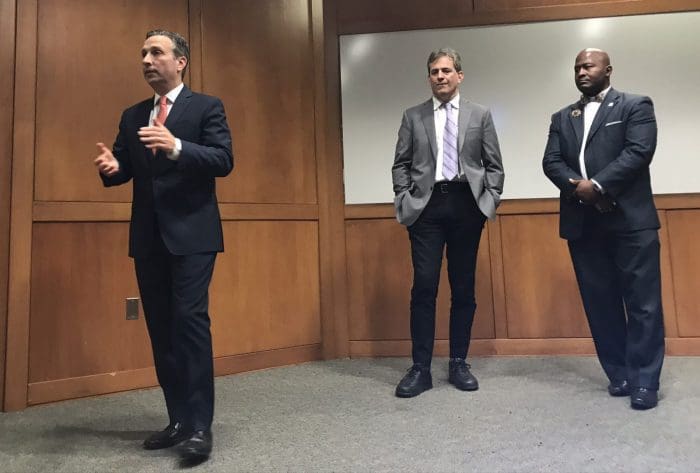 “Since then, we’ve had a lot of data,” Duff replied. “…What we’re seeing is lots of lots of places where the numbers are actually coming down the vaccination rates.”

Kousidis called it a statistical manipulation to focus on pockets where the vaccination rate has dropped and criticized him for not having the exact percentage rates off the top of his head. She transitioned to using Long Island as an example. There had been outbreaks of whooping cough and chickenpox, but the children who hadn’t been vaccinated were not to blame because they were prohibited from attending public school, she said, begging him not to support the proposed bill.

Duff reiterated his support for vaccinations and for removing the exemption.

Kousidis provided NancyOnNorwalk with the testimony she submitted against the proposed bill. It cites the 2003 Rell statistics and elaborates on her arguments regarding Long Island.

“A zero tolerance policy for religious freedom, personal choice and bodily autonomy is a dangerous philosophy to embrace and not one we are used to seeing perpetuated by our government,” she wrote. “These very real and legitimate concerns are being met with fierce intolerance and blatant hatred and persecution of those who express them.”

Duff was subsequently quoted in Hearst media as saying, “The anti-vax crowd cannot substantiate anything in fact,” and calling them “generally the most aggressive, hostile, rudest and threatening group of people I have ever experienced as a legislator.”

The bill was moved to the House floor in February but never taken up because the session was suspended three weeks later amid the coronavirus outbreak. Since then, the COVID-19 pandemic has brought renewed attention to the importance of vaccines. Although there was talk of the legislature considering it during a special session this summer, the bill has not moved forward. 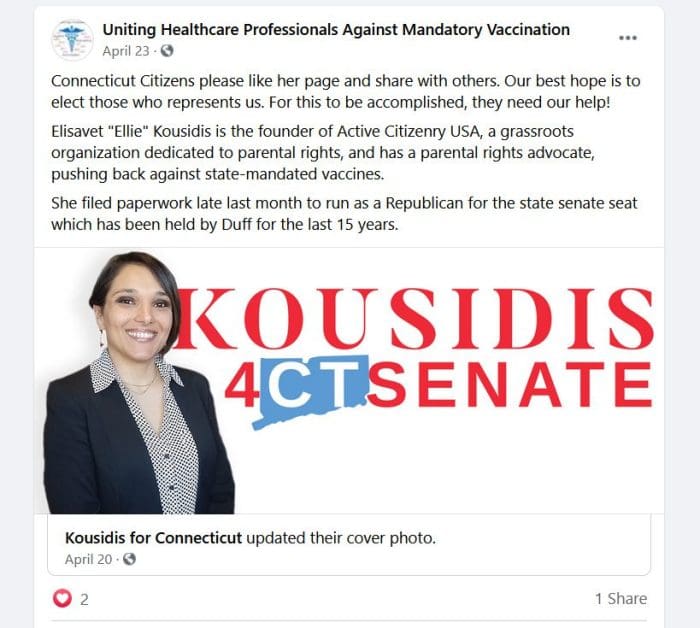 A Facebook page for “Uniting Healthcare Professionals Against Mandatory Vaccination” notes in April that Kousidis is the founder of Active Citizenry USA, a “grassroots organization dedicated to parental rights… pushing back against state-mandated vaccines,” and urges support for her State Senate bid.

Active Citizenry has a YouTube page with 27 subscribers. There are seven videos; the most recent is six months old. One is of children saying they don’t want to be vaccinated. Another is a talk given by Robert F. Kennedy Jr., who campaigns against vaccines. His family has denounced him for spreading “misinformation.”

Active Citizenry’s website suggests that the FDA “is failing us and is costing us dearly.” It offers this bio for Kousidis:

“Ellie Kousidis is a proud educator, activist, and mother of two. She holds a Bachelor of Science degree in Psychology, as well as Masters degrees in Teaching and Educational Technology. She holds three State of CT teaching certifications including, Secondary Social Studies, Library Media Studies, and Technology Education. After teaching World History and Psychology for several years, Ellie is now a School Media Specialist and Technology Professional Development Leader. She is part of the District Wide Data Team as well as the Instructional Leadership Team helping facilitate the use of data driven instruction to improve academic outcomes. Ellie also holds a position as an adjunct professor of Educational Technology. She is passionate about teaching information literacy and believes strongly that creating an Active Citizenry is the only way to preserve freedom and the American way of life.”

Kousidis, on her campaign website, cites “nearly two decades of experience as an urban educator in Connecticut.” Her LinkedIn page says she’s been a “Media Specialist/Technology Professional Development Leader” at Rippowam International Baccalaureate World School since August 2016 and was a high school social studies teacher from July 2005 to June 2012. This leaves a four-year gap.

Asked about that, Kousidis wrote, “{A} woman’s credentials do not evaporate when she has children.  It’s a shame, as women, that we still need to remind others of this at times. Nevertheless, during the time I was home with my children, I volunteered my services and experience in various capacities.”

NancyOnNorwalk asked Kousidis where she is an adjunct professor and how many people are involved in Active Citizenry USA. She didn’t address those questions in her Sunday email. 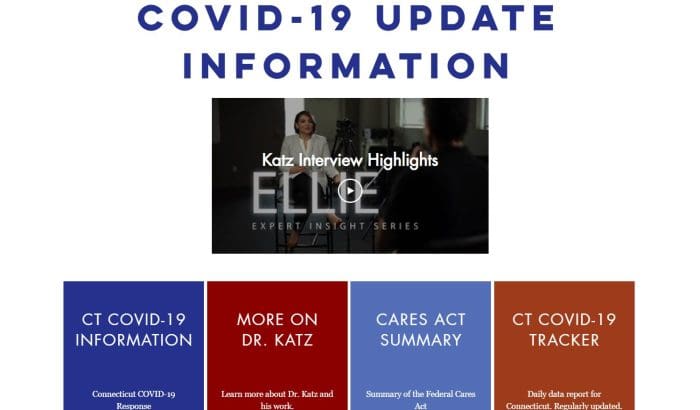 The “expert insight series” examining COVID-19 is a high priority on Kousidis website, advertised on every page with a banner across the top. The only other video on her website Monday evening was a one-minute introduction to Kousidis.

She did not mention vaccinations in the April speech.

“As a small business owner, I could talk to you about (Duff’s) tax policies and how he’s basically carried water for the last two governors and has voted for every single tax increase that we’ve seen in the state of Connecticut, and as the senate majority leader that pretty much makes him directly responsible for the mass exodus that we’re seeing in the state of Connecticut,” she said.

Duff worked behind the scenes to create a new Norwalk High School “without any transparency” and “the things that I’ve seen and heard from him in the middle of a (COVID-19) crisis are absolutely not anything that you would expect of a leader.”

She also talked about winning the Stamford Public Education Foundation’s Excellence in Education Award for getting grant funding to help redesign her school’s media center into a state-of-the-art learning commons and her opposition to school regionalization.

Quite frankly I think this article is a distraction from the real issues. CT does not have a vaccination issue other than the amount of vaccinations given to children now compared to 1986.

What we should be focusing on is Public Act 19-163 that was sponsored by Bob Duff allowing small cellular antennas in front of peoples homes on street polls and stop lights.

We should be focusing on the police accountability bill also sponsored by Bob Duff which does not solve any issues but makes CT more unsafe. He did not include removing liability protections from Judges, CPS or the CT legislative offices just the police that put their lives on the line every day.

We should be focusing on the desire of Bob Duff and his cohorts to remove single family housing in CT and inject regional governance into local policy. Furthermore these type of bills make the need for school regionalization a non issue. They serve the same purpose. School regionalization is another thing that Bob Duff supports. There are a plethora of bills and discussions around removing and limiting single family housing in CT such HB05132. https://www.darientimes.com/opinion/article/Letters-Darien-residents-oppose-Desegregate-CT-15527694.php. Or this from 2018 HB5045.

Or how about the fact that we are in an economic recession due to Corona and we should be focusing on how to fix that and get our legislators back in session. If they can go grocery shopping then they should be doing their jobs within the state house. This type of piece is unnecessary and a distraction from the many and very real issues facing CT residents.

Thank you to Ellie for supporting parental rights, religious freedom and CHOICE. This does not make her “anti vaccine”. The state has no business deciding what gets injected into our own bodies.

I am especially thankful for her views given the barely tested and rushed COVID 19 vaccine is about to be rammed down all of our throats and potentially mandated for every citizen including children. Rep. Ritter already stated back in Feb that the COVID vaccine would be mandated for school once it comes out. NOT Ok with that.

Wow…Ellie Kousidis is a pretty accomplished woman. Multiple degrees and a lot of experience as a teacher. To me that stands in stark contrast to Bob Duff, whose only experience is a few months as a substitute teacher and selling a couple condos as a real estate agent.

I don’t like the idea of professional politicians, especially one who actively campaigns out of his district to pave the way for his next campaign for congress when Jim Himes goes away. I think Ellie is the right choice for women and men who want a little local change.

I don’t want to vote for Bob Duff, but it’s pretty clear she’s an anti-vaxxer. Can we please have some better choices?

@Diana Waller — Your points are right on. In addition it should be noted Duff’s WindFarm support will increase our electric bills by 20-50% once projects are completed. To all those who foolishly believe otherwise (Same who have supported him with NPD debacle) attached is some reading material.
https://yankeeinstitute.org/2020/09/14/connecticuts-offshore-wind-deals-may-drive-up-electricity-costs-for-consumers/

Guessing Chris Perone and Bob Duff can fill in the blanks..

Diana, You seem to object to placing “small cellular antennas…on street polls and stop lights.” What is your objection?

Great article that focuses on the candidate and what she sees as key issues in CT. Can we assume that since she supports “bodily autonomy” that she would work hard to protect rights currently afforded under Roe v. Wade?

Interesting piece, can’t wait for the in-depth analysis of an inconsistency in Senator Duff’s positions.

@CT V, if the least ellie is anti vaccer, that is a nonissue. Parents dont have to vaccinate their kids and yet they get to go to school. Bob duffs egregious bills that he shoved through and rammed down our throats are the bigger issues.
Tomorrow, it’s the start of the downfall for Connecticut police officers. They will not be able to protect us as they should be allowed. At this point, start thinking about protecting your own home and support 2A.