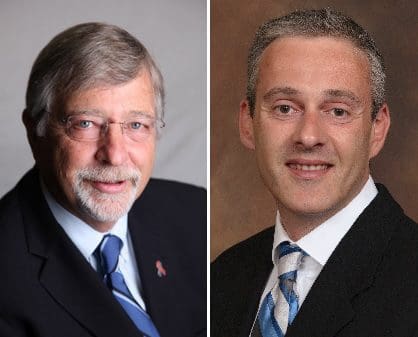 Watts took Mayor Harry Rilling to task for what he said was “leading from behind” when it came to fixing the city’s sidewalks, an issue Rilling emphasized in his campaign last fall.

“Mayor Rilling is working hard to fulfill his campaign promise to improve sidewalk conditions in Norwalk,” Kydes wrote. “In office for only a few months, Mayor Rilling has been able to advocate and get Council approval for Norwalk’s first-ever sidewalk evaluation. With this achievement and his work on changing the City, Norwalk is on its way to safer and usable sidewalks.

“I commend Mayor Rilling for taking on sidewalk improvement, as this is no easy task!”
John Igneri (D-District E) also took issue with Watt’s assertions.

“I have been in meetings with Mayor Rilling, in his office, where we have discussed with other Council members developing a plan to manage our City’s sidewalks and footpaths,” he wrote. “It takes several different committees to work on making this happen. It is not an easy task and takes time, but Mayor Rilling is already making progress to enhance our sidewalks and footpaths.”
Tuesday night, Watts complained about a lack of communication on the issue.

Rilling pointed out in the meeting that Watts is on both the Ordinance Committee and the Public Works Committee, Council committees heavily involved in dealing with the sidewalk issue, and thus should be well informed.

“There has not been any comments or evidence or actual facts placed before this council that I know of or certainly the Public Works Committee that would indicate that there is any way shape or form that would indicate that the city of Norwalk should, could or would be able to pay to replace or repair all of the sidewalks in the city,” said McCarthy who is chairman of the Public Works Committee. “So it, I’m sorry to use the word, it continues to be extremely unfortunate that we continue to sort of bury the work that we might actually be able to get done to make this problem better by dividing the city for some reason that I can’t quite understand.”

Kimmel, who caucuses with the Republicans despite being a Democrat, defended Rilling.

Kimmel said he has served as a Council member under four mayors. Rilling is the first to tackle the difficult, complicated and neglected issue of Norwalk’s sidewalks and footpaths, he said.

“In just a couple of months, we are redoing our ordinance, we are having this survey, we are having these discussions at the Council level, which I think are great,” Kimmel said. “… Perhaps I have been more patient than you are. I think we are moving forward. I think the discussion has been very good and I commend the mayor for finally trying to deal with a very expensive and very complicated issue. For too long it’s been ignored. Here we are finally to everyone’s credit dealing with this issue.”

Rilling, in a recent conversation with NancyOnNorwalk, said that, because the current budget was developed before he took office, he could not get everything he wanted right away. He said Tuesday night that this year’s capital budget includes $150,000 more than the previous capital budget for sidewalk repair. And, in the earlier talk with NoN, he said he would be pushing hard for more sidewalk funds when he gets a chance to develop the 2015-16 budget from the start.

Kimmel alluded to that Tuesday night, saying, “I am pretty sure that the funding will be in place after the next capital budget.”

In order to be informed and have communication one must attend committee meetings. Seems as if out of the last 5 meetings of Ordinance, one of which was a public hearing…someone only attended 2…

I would imagine that if the issue was of the utmost importance one would attend these committee meetings and make their concerns known and begin the process of rectifying the situation.

While that same person attended all of the Public works meetings the last 5 times I would imagine the sidewalk subject has come up more times than not so I’m not understanding the communication angle.

Also, the same person sits on the Finance Committee where all budgetary items are discussed at length…just not getting it!

This at least takes away from and deflects talking about issues like shot spotter with Harry.Last two shootings may have produced a shooter if Norwalk got what it was promised.This sidewalk deal has now become a red herring for those not clueless how Norwalk works and how it serves its taxpayers.At least someone gave Harry credit for leading somewhere in the mix.

@Joanne Romano
.
It does seem odd that Mr. Watts would claim ignorance of what’s happening on sidewalks when he sits on the very committees that have been dealing with the issue.
.
Perhaps sidewalks aren’t really the issue here and Mr. Watts is clumsily seeking political payback for the fact that Mayor Rilling won’t endorse Watts’s campaign against Rep. Chris Perone. Pure speculation on my part but based on Mr. Watts’s past behavior I wouldn’t put it past him.

OK, this is off topic (no matter how hard you try to connect it), but, since I had the opportunity the ask the mayor about this tonight…

Rilling said Shot Spotter is dying a slow death because of its cost and poor accuracy. He said it was never “promised,” as you say, but was discussed back when he was chief. He said the system would have cost $300,000, plus installation and maintenance, and had too many variables. He said police spent too much time responding to false positives.

Watts appears to be missing in action from committee work and then shooting from the hip. He jumps frm one rampage to another. No one is buying this stuff. All noise, no substance.

Watts is a lot smarter than his political opponents think. He apparently has not been able to put in the time for all the committee meetings. That will work against him with voters in the primary. In my opinion he has a bright future in politics. He alone questioned the no-bid $273,000 deal with City Carting to buy THREE compactors for Crescent St and now we know only TWO are being purchased. Does anybody believe Alvord didn’t know that when he asked for the $273,000 ?

I’m sorry Mark but rules are rules.Fact is Shotspotter no longer sells equipment and no longer costs nearly what our mayor has quoted. Things have changed over the last 5 or six years when this was discussed.This example simply shows our Mayor is out of touch with the latest on crime fighting figures and may be wrong about some monetary facts we are now faced with as a city.Figures right now seem to be 1/6 of the cost with the 22 states shotspotter services.”discussed back when he was chief” was acurate.The here and now paints a new picure the canvas has changed Rilling has not.

Not sure what “rules” you are referring to, unless it has something to do with using comment threads to switch topics and push your own agenda. But since I took the bait…

I would not be surprised if the mayor was citing information from some 3 to 5 years ago, when he was chief and had to make such decisions. Apparently he based his decision then on the then-current info, right or wrong. I would expect the current chief and his team to be up on the current situation and to recommend for or against it if they really feel it is worth it. You make the pitch for a greatly improved system, but the Fox story was from a year ago, not five year ago. I have not investigated the topic, nor do I expect to at this point. But I am apt to give more credence to a journalist’s research than to a that of a partisan on the issue. That’s just me. But save the discussion for police threads or budget stories, please.

No surprise that oldtimer, ardent supporter of municipal employee unions on these pages, would speak in support of Councilman Watts. After all, Councilman Watts consistently prioritizes the desires of unions over the needs of taxpayers. Such misplaced priorities would be troubling from any council member, but particularly so from Mr. Watts who has unpaid property taxes stretching back to 2011.
.
What oldtimer also neglects to mention is that Councilman Watts voted for the compactor purchase after criticizing same. And Hal Alvord, who proposed the purchase, is presumably supervised by Mayor Rilling.