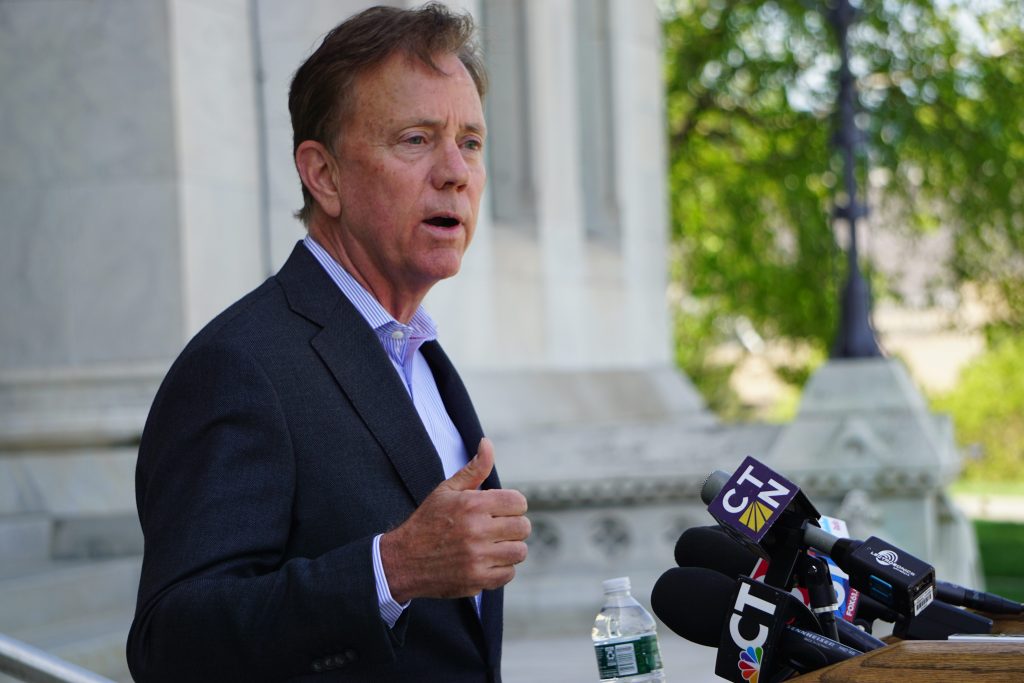 Gov. Ned Lamont announced the dissolution of the Partnership for Connecticut on Tuesday morning in a hastily arranged press conference at the Capitol. (Cloe Poisson, CTMirror.org)

The final straw appears to be centered on Dalio officials’ efforts to remove the partnership’s executive director — days before state lawmakers had been notified about the problem. Lamont made it clear that the decision to dissolve the partnership was initiated by the Dalios. Barbara Dalio, the co-founder and director of Dalio Philanthropies, released a statement Tuesday blaming certain Republican lawmakers for sabotaging the experiment.

“I think there was a sense from the Dalios there were some people who really wanted to undermine the mission,” Lamont said during a late morning press conference outside of the Capitol. “Due to a breach of trust we have both decided to disband the partnership.”

Lamont said he and Barbara Dalio intend to recommend the dissolution at The Partnership for Connecticut’s next board meeting. A majority of the members will need to approve the dissolution, as well as three of the four lawmakers on the panel.

The governor refused to say whether he knew in advance that Dalio Philanthropies’ representatives would try to force out the partnership’s new executive director, Mary Anne Schmitt-Carey, on May 4. But legislators from both parties told the CT Mirror they still have not been fully briefed on the matter.

“You don’t have a turnstile and run that right out there to the press,” the governor said. “I think that was a bridge too far.”

The Dalios have won praise from state and local education leaders for previous initiatives to assist at-risk students in East Hartford, Meriden, New Haven and Hartford, proposed the unique partnership 13 months ago.

Tuesday, Barbara Dalio said in a statement that she doesn’t see a path forward to help students because of “political fighting.”
“It has become clear that it’s not working because of political fighting,” Barbara Dalio wrote in a statement. “I am not a politician and I never signed up to become one. I only want to help people. Through this experience I’ve learned about our broken political system and I don’t see a path through it to help people.”

It is estimated that the partnership spent just $25 million during its short tenure on laptops for those disconnected from school during the pandemic. That means roughly $14 million of the state’s $20 million contribution will be returned to the state’s coffers.  A vote of the legislature will be required for that funding to still be spent on education.

Under the terms of the agreement, Dalio Philanthropies and the state each would contribute $20 million annually for five years, and invest the funds in some of Connecticut’s lowest-performing school districts. The primary goal was to target students at risk of failing to graduate from high school. The partnership also would collaborate to raise a third, $100 million, from other philanthropic groups.

But the Dalios’ offer came with an unprecedented qualifier: the process would be exempt from state disclosure and ethics rules.

Lamont and most of his fellow Democrats in the legislature’s majority established this exception when they endorsed the state’s partnership — despite strong objections from minority Republicans. Critics noted that half of the funds came from state taxpayers, and that all of the money would be spent on the public school system.

In her statement Tuesday, Barbara Dalio specifically named the top two Republicans in the House of Representatives, House Minority Leader Themis Klarides of Derby and Deputy Leader Vincent J. Candelora of North Branford, as obstacles. Candelora and Klarides were the two most vocal critics of the privacy arrangement.

“Our dream of working together in a bipartisan way to help the disengaged and disconnected youth of Connecticut came to an end because politicians like the two leading Republicans of the House, Rep. Klarides and Rep. Candelora, want to fight in the media rather than debate issues and resolve them with other board members,” Dalio wrote. “They sought to sabotage The Partnership.  It can’t go on like this, so I suppose they “won.” That is tragic because the other board members wanted The Partnership to succeed.”

The governor expressed surprise Tuesday that the criticisms about transparency didn’t quiet down over time. He noted that the partnership shared all of its decisions with the public, even if interested persons couldn’t follow all of the deliberations.
But the leader of Meriden-based, parents group, said the governor simply fails to understand the concerns of parents.

Samuel added that “you don’t meet privately and tell us what you did afterward. You have to include us. There is no way around that.” 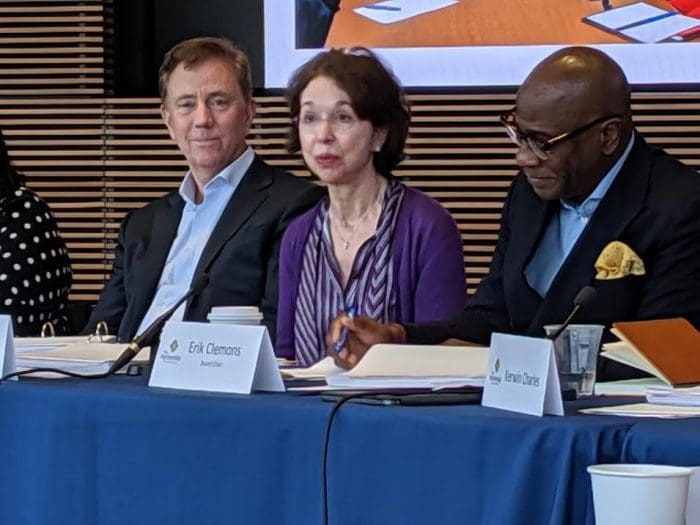 Barbara Dalio makes a point at second meeting of the Partnership for Connecticut in December. At left is Gov. Ned Lamont, a member of the private public partnership board, and Erik Clemons who is chairman of the board. (Kathleen Megan, CTMirror.org)

The decision to disband the partnership led lawmakers from both parties to characterize it as a failed experiment in terms of transparency, despite having laudable goals.

“Public trust is first and foremost when you’re getting into a partnership with millions of state dollars involves, and this was broken from day one,”  Klarides said Tuesday following Lamont’s announcement. “Thinking out of the box is good, particularly in very difficult budget times. … But you can’t run roughshod over transparency and ethics, and that’s what they tried to do.”
Candelora particularly irked Lamont when, during a June 3rd House floor debate, the lawmaker said these exemptions make Connecticut residents little more than “peasants” waiting for the wealthy to “sprinkle” dollars on their school districts.

“That didn’t help the fundraising very much,” Lamont said Tuesday.

Klarides opened a door for the news media to obtain documents related to partnership functions when she asked Attorney General William Tong to clarify the obligations of state officials serving on the partnership board with respect to Connecticut’s Freedom of Information statutes.

Tong responded in an August 2019 opinion that all state officials on the partnership’s oversight board would have to disclose partnership documents, upon request, in accordance with FOI statutes.

But legislators from both parties expressed surprise earlier this month at media reports that the Dalio representatives had approached Schmitt-Carey, and asked her to resign.
In an email to all the board members on May 12 first reported by The Hartford Courant, Schmitt-Carey wrote that she was “ambushed” on May 4 when she was asked to resign by Dalio and partnership board Chairman Erik Clemons.

“I was ambushed with a set of false and defamatory accusations,” she wrote. “And then [I was] told to voluntarily resign by 12:00 noon that day or the allegations would become ‘much more public.’ I categorically denied all of the allegations because they were false and then was told they did not want to hear me speak. They also said that they had been talking about my “ineffective tenure’ for ‘some time’, which bewildered me given my short tenure.”

Looney, who like Klarides said he still lacks full details on why Barbara Dalio tried to oust the executive director, added that the transparency and ethics waivers were a mistake. “In hindsight I certainly would not have done it this way.”

It is estimated that The Partnership for Connecticut spent just $25 million during its short tenure on laptops for those disconnected from school from the pandemic. That means roughly $14 million will be returned to the state’s coffers.

A vote of the legislature would be required for that funding to still be spent it on education.

The governor said the Dalios have invested heavily in Connecticut schools, adding he hopes they will continue that effort outside of the partnership.

The state committed $22 million in bonding and $30 million in tax incentives to Bridgewater in 2016 to help the firm expand facilities in Westport, Wilton and Norwalk, retain 1,400 jobs and create 750 new ones.

Ray put his money were his mouth is not like a lot of people….
Ray keep up with your charitable work and words of wisdom
You are a men of principles

Sorry kids, can’t have nice things in this political system. It’s better to learn it now. Way to go all you disgruntled people out there. You took charity away from children’s education. For sure those two opposing reps have something better to offer?? If only government ran slightly like Bridgewater

I lost a lot of respect for the Dalios with this announcement.

For one, it’s a blow to education and money that may have already been allocated by school districts future needs.

But, blaming Republicans? Republicans in this state don’t have the authority to purchase a ham sandwich. How the heck is this their fault?

Lastly, Bridgewater makes nothing besides paper and making a fortune off the misery of failed industries and people’s lost retirement savings. This is what hedge funds do while enjoying some of the lowest marginal tax rates due to the carried interest loophole that politicians tell you they don’t like when they campaign. But once elected, thanks to contributions from folks like the Dalios, they conveniently forget to do anything about it.

Ray…keep fighting the good fight. You have done an excellent job in assisting local communities.

Dalio’s way or the highway? Classic classist mess. Ask, is it charity if it comes with stipulations? Why won’t wealthy people donate money without needing to be involved and controlling?