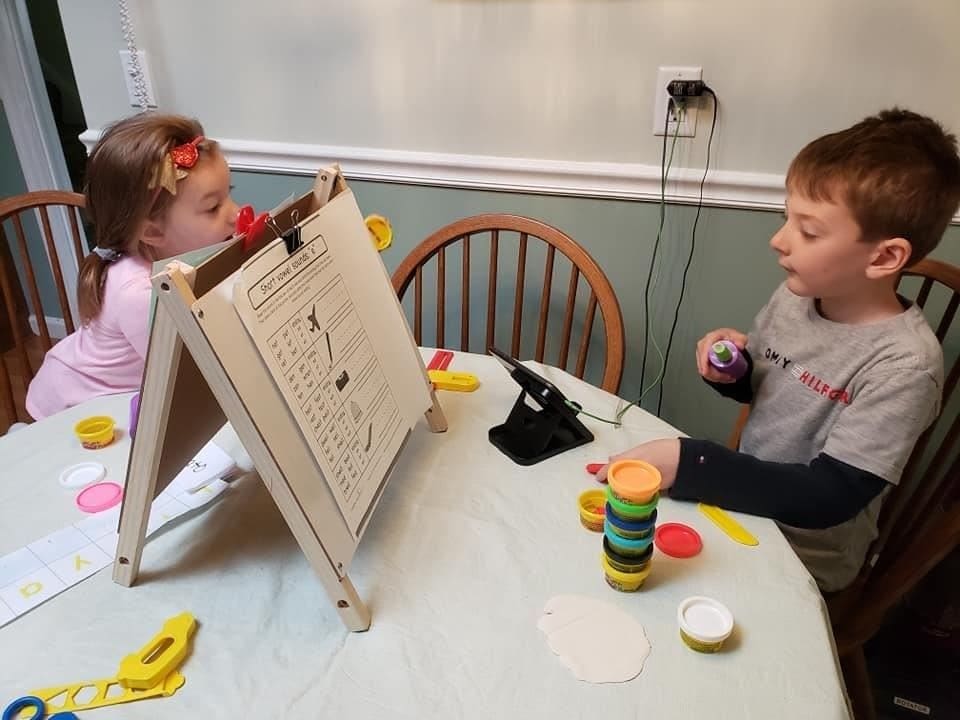 Two Norwalk children engage in homeschooling, in this photo included in the Norwalk Public Library’s COVID-19 exhibit. Click on the photo to see the exhibit. (Contributed)

NORWALK, Conn. — May 20 will come and go but in-person school classes will not resume in Connecticut.

Gov. Ned Lamont on Tuesday threw in the towel, announcing that he is ordering in-person classes at all K-12 public school facilities in Connecticut to remain canceled for the rest of the 2019-2020 academic year and continue providing distance learning during this period. Schools will also be required to continue providing meals to children under the school lunch and breakfast programs for consumption at home, as they have been throughout this emergency.

“I know how important it is for so many students and teachers to finish out the school year, and I was holding out hope – particularly for high school seniors – that we’d at least be able to complete the final few weeks, but given the current circumstances and to protect everyone’s safety, it has become clear that it’s just not possible,” Lamont said in a press release. “I want to thank the many educators across our state who have stepped up to provide remote learning during this time, as well as the many staff members who’ve been putting thousands of meals together for students each and every day.”

Lamont is the 40th governor in the nation to decide that it is not safe for school buildings to reopen. He had previously extended their closing to May 20.

Norwalk Public Schools has been discussing the possibility that schools would remain closed. On Monday, the Norwalk Board of Estimate and Taxation authorized $1.6 million in spending, in part to ensure that each school child has a device for distance learning, even the kindergarteners. This will eliminate the need for printed learning materials, which cannot be tailored to individual needs.

“If we’re not going back to school at the end of May, we are going to need to make arrangements for students to clear out their lockers and their cubbies, and for teachers to pick up their belongings prior to the initiation of summer school,” Norwalk Superintendent of Schools Steven Adamowski said at the April 21 BoE meeting. “Obviously, we need to do that within all the precautions deem necessary at that time, so we’re not sure what that will look like yet. It might be done in phases, in small groups, individually, but we will have to deal with that in some way.”

Norwalk Public Schools is conducting its distance learning in two-week phases. Based on input from parents and staff regarding distance learning, May 1 and May 15 were added as days off for students and teachers.

Principals at each of Norwalk’s four high schools have spoken to their seniors, asking for their views about graduation, Adamowski said.

“The vast majority of seniors that have been consulted obviously want a graduation as opposed to not having a graduation or having some type of a virtual procedure,” Adamowski said. “We have determined that the first week in August, which is right after the summer credit recovery period for high school graduation is probably the latest date we can go with any type of, of a ceremony before students leave for the military or for some colleges that will be starting earlier. Assuming that there they are starting in, in in person. So that first week of August is probably a good week.”

NPS has been studying a hybrid system suggested by Common Council member David Heuvelman (D-District A), “almost like a drive in movie,” for graduation, Adamowski said. Families would attend in cars while the seniors march across a stage and everyone has video and photographs of them receiving their diplomas.

“We’re very intrigued by that, we’re looking into that further,” Adamowski said. “But I want you to know we are we are working on this and we are trying to do something. We are we will make every effort to do something that provides some type of memorable experience for our graduates to be to the limits of the of the circumstances.”

So much for the lie that we needed to get past peak hospitilizations like we did almost two weeks ago. Never thought we could do worse than Malloy for a leader. This decision could easily have waited a week or two or could have extended the outage through May 31.

This without question was the right move by Lamont. The virus is still out of control, just asked any Norwalk Hospital Nurse.