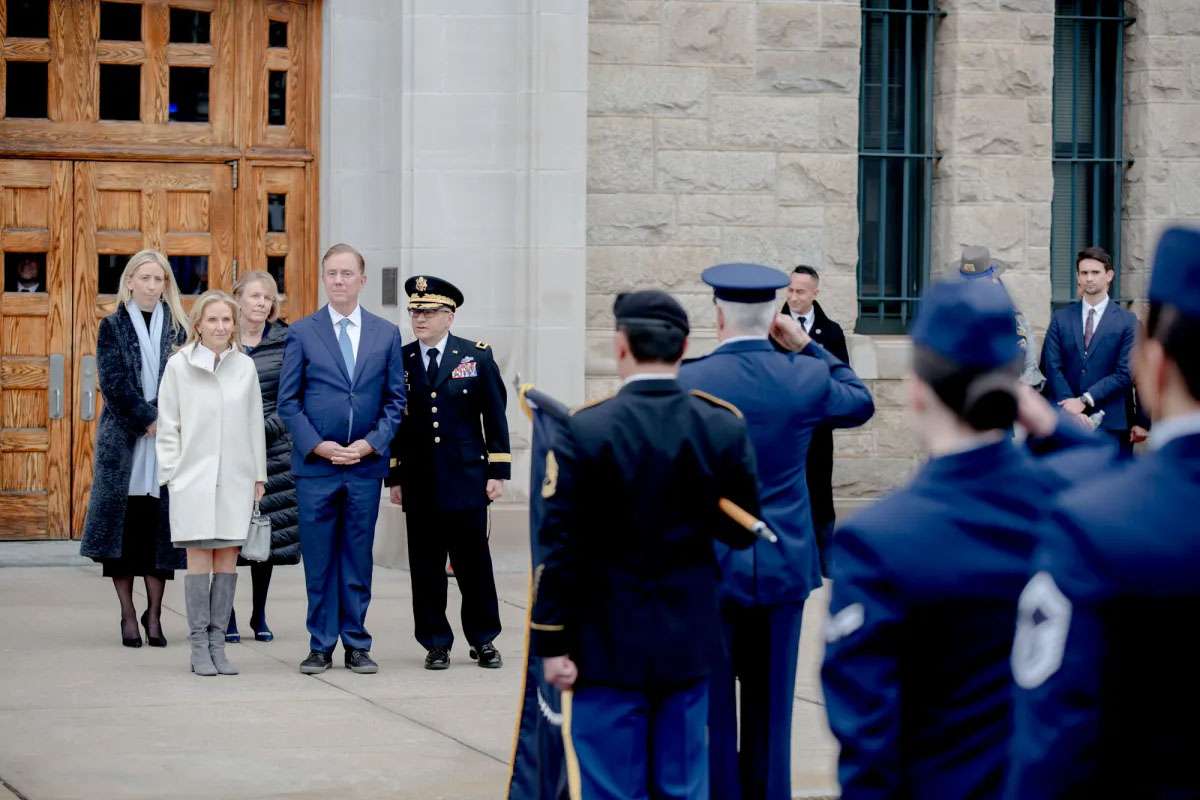 Gov. Ned Lamont and Ann Lamont after the governor was inaugurated for his second term on Jan. 4, 2023. (Yehyun Kim, CTMirror.org)

Ned Lamont began his second term as Connecticut’s governor at midday Wednesday, a Democrat enriched by political capital that comes with a 13-point reelection win and overwhelming Democratic majorities in the General Assembly.

Lamont, who celebrated his 69th birthday Tuesday, took the oath on stage at the State Armory, as he did four years ago. And as was the case then, Connecticut awaits details of his agenda for the coming four years.

But, as did lawmakers hours earlier, he dedicated the first moments of his second term to democracy, contrasting the orderliness of the day with the gridlock of present-day Washington and the stunning assault on the U.S. Capitol two years ago.

“For me right now the ceremony means even more,” Lamont said. “Look what’s gone on in Washington. It just reminds me: Pay attention to democracy, and pay attention until you get it right.”

The other new constitutional officers each had a small personal moment.

Scanlon was sworn by his former boss, U.S. Sen. Chris Murphy, and Scanlon’s wide-eyed young son, Jack, amused the crowd. Thomas, the first Black woman to hold her office, said she stood on the shoulders of women and persons of color who preceded her.

With solid Democratic majorities and no deep schisms in their House and Senate caucuses, Ritter and Looney were reelected by acclamation in a day of a pomp and celebration for lawmakers and statewide officers. 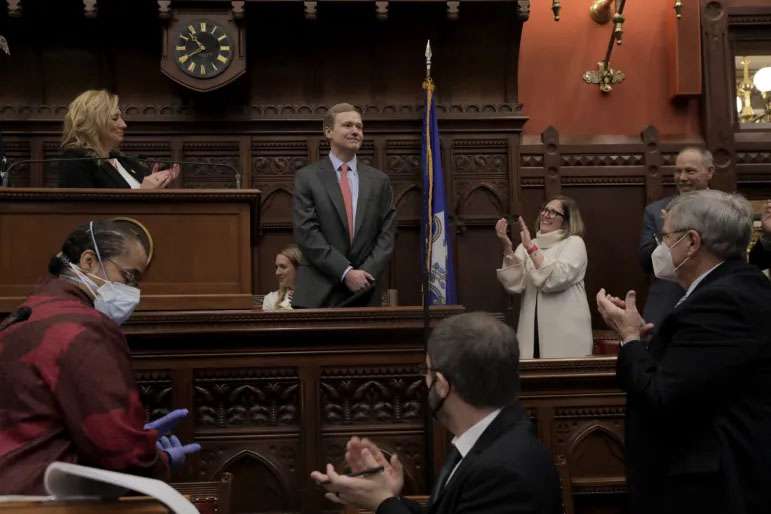 Rep. Matt Ritter, D-Hartford, accepts another term as Speaker of the House of Representatives on Jan. 4, 2023. (Yehyun Kim, CTMirror.org)

House Minority Leader Vincent J. Candelora, R-North Branford, and Senate Minority Leader Kevin Kelly, R-Stratford, each seconded the nominations of the two Democratic leaders in the House and Senate, a gesture of loyal opposition, not surrender.

In a floor speech, Candelora said he will continue to disagree on policy with Ritter and the Democratic caucus, but he said those disputes would not prevent him from helping Ritter to keep the body functioning.

“This nomination has nothing to do with waving the white flag,” Candelora said. After taking the gavel, Ritter extended appreciation to Candelora and the Republican minority.

“You are right,” Ritter told Candelora and the rest of the House members. “We are not Washington D.C.”

Ritter said it was a “false narrative” to believe that Democrats and Republicans are not performing their job when they cooperate and reach across the aisle to maintain the decorum in the legislature.

To drive home that point, Ritter highlighted legislation that passed in 2017, which placed financial restrictions on state lawmakers and has helped the state to pay down its long term debt and build the largest rainy day fund in state history.

Ritter said that legislation only passed because of a bipartisan agreement.

In the Senate, Looney reminded colleagues that the opening day of the 2021-22 term was Jan. 6, when the senators gathered outdoors to be sworn in, a precaution from COVID-19. But Looney noted the day was more memorable for another reason. “We returned home after that ceremony to witness the attempt of the defeated president and some of his supporters to destroy our democratic system,” Looney said. “The hopes of fledgling and aspirational democracies took a blow that day. But, fortunately, we in Connecticut were not thrown off the rails by that appalling event.”

The oath of office was administered to Looney by Judge Brian Fischer. Looney said he most likely would not be in the Senate without Fischer.

Fischer, a long-time friend, donated Looney a kidney in 2016.

Looney noted the dramatic turnover since he first was elected as the Senate’s top leader in January 2015. Two-thirds of the 36 members present that day have departed from “the circle,” as the Senate refers to itself.

“Looking around the circle, there are now only 12 of us being sworn in today that also took that oath in 2015,” Looney said.

Looney and Ritter chose to emphasize different points when it came to the budget challenges facing the new General Assembly. Members of the House of Representatives stand at the beginning of the 2023 legislative session on Jan. 4, 2023. (Stephen Busemeyer, CTMirror.org)

Since lawmakers passed those controls in bipartisan fashion five years ago, the state has amassed a record-setting $3.3 billion rainy day fund and made nearly $6 billion in supplemental payments against pension debt — more than $4 billion in the last year alone.

But at the same time legislators enacted a $660 million tax relief program last spring while expanding town aid and funding for child care.

“We are all fortunate that we can do both,” he added. “We can provide in the present and we can make reforms that have lasting impacts that also protect the future.”

But while Looney also hailed the state’s commitment to saving and paying down debt to serve the future, he said lawmakers must do more to help the present.

“In this new term, we must make even more urgent commitment to meet” a host of social needs, the New Haven lawmaker said.

Legislators have expanded both education and general government aid to communities in recent years, but a recent state analysis shows the property tax — the chief municipal revenue-raising tool — continues to disproportionately burden the poor and the middle class.

And Looney added the lack of affordable housing to a growing list of pre-existing social problems only worsened by the pandemic. The state must establish new mandates and incentives to accelerate housing development, he added, “especially in communities that have failed over the years to recognize that we are one Connecticut.”

Outside the Capitol, organizers with CT Nurses United gathered to air their frustrations about a current staffing shortage among the essential workers, which they say has led to lackluster care for patients. Speakers called on lawmakers to make Connecticut the “gold standard” for nursing care. Organizers with CT Nurses United gathered to air their frustrations about a current staffing shortage outside the state Capitol on the first day of the 2023 legislative session. (Jaden Edison, CTMirror.org)

Democrats won majorities of 98-53 in the House and 24-12 in the Senate. The House begins the year with two vacancies as Rep. Dan Fox, D-Stamford, and Rep. Edwin Vargas Jr., D-Hartford, resigned and did not take the oath.

Fox is awaiting a judicial nomination. Vargas is pursuing a job in the state university system. Neither can join another branch of government once their term began.

How about some term limits?🥵👍🏼🦔🇺🇸