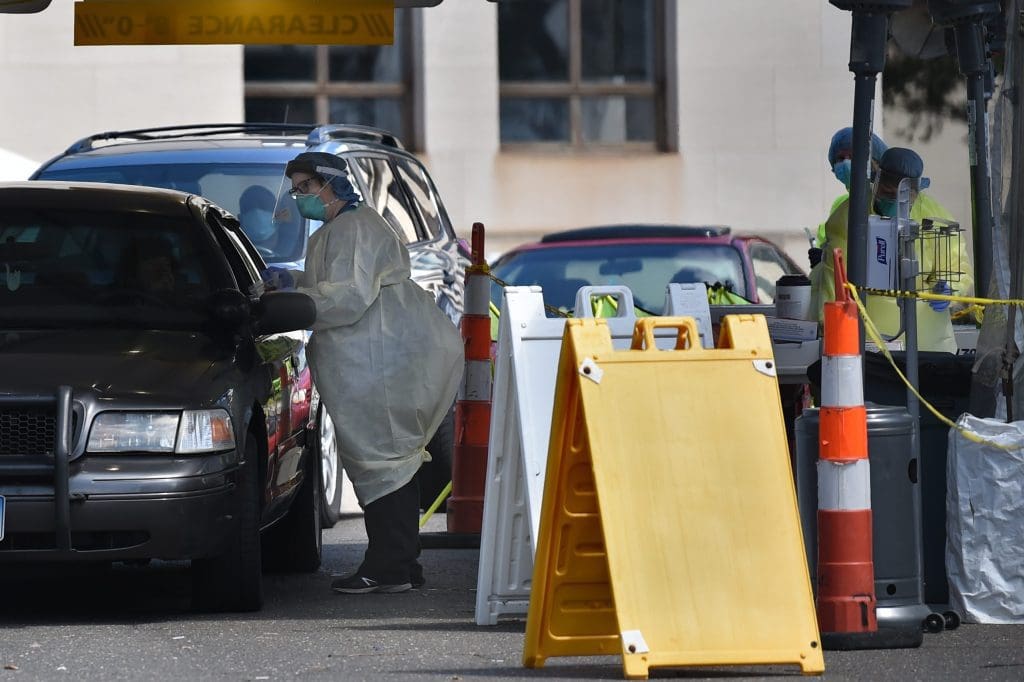 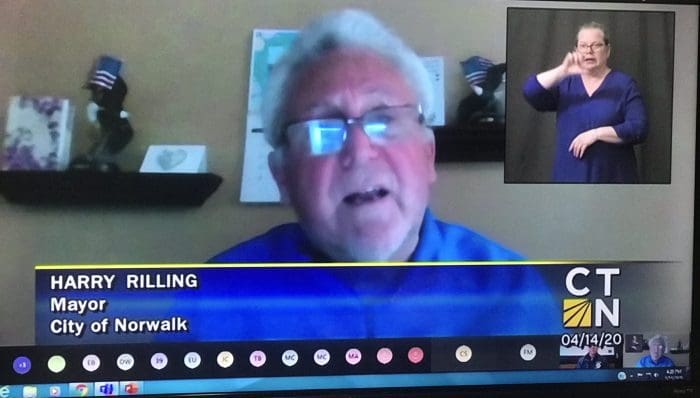 As Connecticut’s death toll from COVID-19 jumped by another 69 fatalities Tuesday, two Fairfield County mayors voiced strong bipartisan support for Gov. Ned Lamont’s handling of the crisis and urged caution about reopening the state too quickly.

The number of people who have died in Connecticut during the pandemic now totals 671. Confirmed coronavirus cases increased by 608 to 13,989, according to state reports, and there are 1,779 people hospitalized with the disease.

Despite those grim statistics, Danbury’s Republican Mayor Mark Boughton and Norwalk’s Democratic Mayor Harry Rilling said their cities have received whatever state help they’ve requested during this crisis. Both also insisted that politics shouldn’t be entering into anyone’s response to the public health crisis.

“I just don’t see the state falling down on this at all,” Boughton said during the governor’s regular afternoon briefing on COVID-19. “I think there’ll be time for politics later on… There’s no value in sniping at each other.”

“I’m going to be accused of kowtowing to the governor,” said Rilling. “I can’t think of one thing on which the state didn’t respond.”

“There is no Republican or Democratic way to deal with this pandemic,” Rilling added.

Boughton and Rilling also praised Connecticut’s efforts to work with New York and other states in the northeast and repeatedly warned against relaxing the social distancing and economic restrictions that appear to be slowing the pace of the pandemic. Their cautious approach contrasts with both President Trump’s clear desire for a swift economic jump-start and statements made by Republican state lawmakers that Lamont’s approach may be too damaging on the economy.

The mayors’ comments echo the results of a new poll released Tuesday that show broad public support in Connecticut for Lamont’s handling of the pandemic. But the poll by Sacred Heart University’s Institute for Public Policy and the Hartford Courant also showed that many Connecticut residents aren’t confident in Lamont’s efforts to plan for the state’s economic future.

The poll results come as Lamont and a coalition of northeastern governors work together to figure out the best way reopen the economy without triggering a second wave of the deadly pandemic. The governors warned this week that any easing of restrictions related to the COVID-19 crisis are likely to be slow and linked primarily to public health concerns.

President Trump asserts he has sole authority over how and when the U.S. economy will be allowed to fully reopen, a claim Lamont and other governors flatly reject. In a tweet on Tuesday morning, Trump described the actions of the governors as “mutiny.” 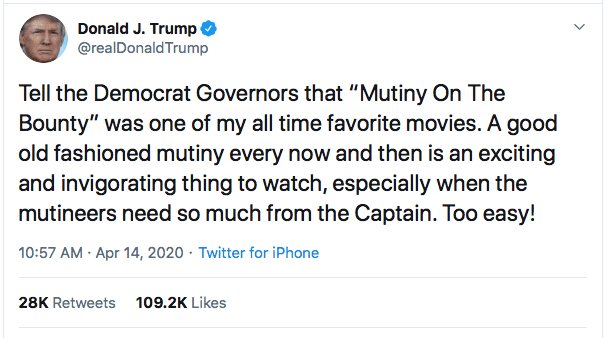 Danbury and Norwalk have been on the front lines of the COVID-19 epidemic in Connecticut since the start. Boughton and Rilling said they are very worried that removing social distancing and economic restraints could lead to a vicious second wave of coronavirus infections.

“We can’t quit,” Boughton said. “God forbid we should ever have to go through anything like this again in the future.”

“The biggest mistake we could make right now is to get complacent,” Rilling warned. “This is not over.”

Lamont has ordered schools in Connecticut and most non-essential businesses to remain closed until at least May 20 and said he plans to follow the public health recommendations from a new panel of experts as he coordinates with other northeastern governors about how and when to reopen the state economy.

“It would be just terrible if we had a second round of this pandemic,” Lamont said Tuesday.

Lamont said that, by May 20, Connecticut will have a great deal more testing data to work with and substantial supplies of personal protective equipment (PPE) that can be distributed to businesses and workers, including food stores and other retail operations.

Experts are predicting the pandemic will peak in Connecticut next week. About one third of Connecticut’s approximately 8,000 hospitals beds are still available, with 1,760 coronavirus patients now hospitalized.

Meanwhile, jobless numbers are closing in on 340,000 in Connecticut. Many of the people who lost their jobs as a result of the pandemic are still waiting for their first unemployment benefit check and the $600 in promised federal aid.

New poll on public response to Lamont on pandemic

While 82.7% of those polled by Sacred Heart University’s Institute for Public Policy supported the governor’s plan to close non-essential businesses and 67.4% said Lamont had done well on school closings, just 45% approve of how Lamont is “addressing a plan for business in the state.”

More than 62% of Connecticut residents surveyed by said they are “very concerned” about what the pandemic is doing to the state’s economy.

The telephone and digital survey of 1,000 state residents was conducted in partnership with the Hartford Courant between March 24 and April 3. The survey has a plus or minus margin of error of 3.2%.

“There was general support for the work of Gov. Lamont and his administration to handle this crisis,” said Lesley DeNardis, executive director of the institute. The also showed that Lamont’s overall approval rating increased to 41.4%, a significant rise from his 31% approval rating in March. 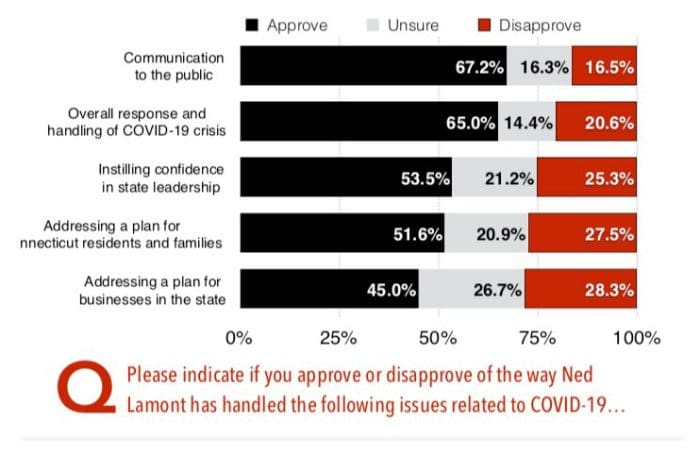 But only 21.8% of respondents said they believe the state was prepared to deal with the COVID-19 pandemic, with 38.1% saying Connecticut wasn’t prepared and 40.1% either neutral or unsure on the issue.

“Not surprisingly, there is disagreement along party lines over the president’s handling of the pandemic and over trust in the media,” DeNardis said of the poll’s findings on national issues.

The survey found that 47.4% of Connecticut residents disapprove of the way Trump has responded to the pandemic, with 39.9% voicing approval.

Only 21.8% of Democrats surveyed approve of the president’s handling of the public health crisis, compared to 71% of Republicans.

Nursing home residents who have tested positive for coronavirus will begin moving into two specially designated sites by the end of the week, officials said Tuesday.

Sharon and Northbridge originally were supposed to clear just one floor for the sick residents. Now, Brown said, both buildings will be entirely devoted to ill residents. The facilities are staffed and ready to go, he said.

Two vacant nursing homes – Westfield Care & Rehab Center in Meriden and Torrington Health & Rehab in Torrington – are being cleaned and are also preparing to welcome COVID-19-positive residents. Officials did not have a timeframe for when those buildings would be ready. Staffing was still being worked out at those facilities.

Collectively, the four nursing home sites will provide nearly 500 beds for residents sick with coronavirus or who are recovering.

Staff at those locations will receive additional compensation, Brown said.

Gov. Ned Lamont said on WPLR-FM Tuesday morning that he is probably a few weeks away from deciding whether to throw in the towel on the current school year. His latest closing order runs through May 20.

Lamont said he is hearing from “an awful lot of parents” who tell him that even a few weeks of school attendance would be beneficial to getting children “re-socialized” before summer.

“That’s why we left the door ajar,” Lamont said.

When it was suggested that a September opening might be in jeopardy, Lamont replied, “Oh, my God.”

Lamont said that only a second wave of COVID-19 infections could jeopardize the next school year, an eventuality the state is hoping to avoid by sticking to social-distancing restrictions until the infection rate drops.

The governor largely deferred to his newly created Reopen Connecticut Advisory Group on the question of what restrictions might be eased first. The panel will include people with expertise in business, public health and bioethics.

Dr. Albert Ko, a Yale epidemiologist, and Indra Nooyi, the former Pepsi chief executive who advises the Lamont administration on economic issues, are the co-chairs. Its members include Dr. Scott Gottlieb of Westport, the former Food and Drug Administration commissioner, and Dr. Ezekiel Emanuel, a respected bioethicist and oncologist. Emanuel is the brother of Rahm Emanuel, the former Chicago mayor and White House chief of staff.

Lamont said Dr. Deborah Birx, the coronavirus coordinator for the Trump administration, told governors on a conference call that the FDA expected to approve a number of anti-body tests by week’s end.

The governor said the availability of tests that show who has immunity from COVID-19, as opposed to current molecular testing that only shows the presence of the virus, could guide decisions on easing restrictions.

At his midday briefing, New York Gov. Andrew Cuomo warned that antibody testing would not be a panacea. Obtaining more and faster testing of current infections may be more helpful in the near term, Cuomo said.

Cuomo, Lamont and other governors forcefully rebutted the president’s assertion Monday he was the final world on easing COVID-19 restrictions. On Tuesday, the two governors stepped back from the confrontation.

“This is not time for any division between the the federal government and the state government,” Cuomo said.

Federal officials said they are releasing $3.5 billion in aid from the coronavirus relief package to the states in block grants to help provide assistance to child care providers. Many child care centers have closed as a result of the pandemic as parents keep their kids at home.

The financial aid is also intended to support healthcare workers, first responders and other types of essential workers with child care costs.

Connecticut is joining Vermont, New York and New York City in asking the U.S. Supreme Court to reconsider a decision that would allow the federal government to deny green cards and visas to immigrants thought likely to use government aid and medical programs.

The coalition is arguing that immigrants shouldn’t be dissuaded from seeking medical care, food and housing during the current coronavirus pandemic.

In February, the Supreme Court voted to lift an injunction blocking the Trump administration’s plan to use the “Public Charge Rule” to deny green cards and visas to immigrants who seek government assistance.

The motion filed this week includes information from a psychiatric physician at the Connecticut Mental Health Center who said patients have told him they are afraid to seek public COVID-19 help because it could hurt their immigration status.