$24B proposal cuts some income taxes, taps reserves to boost spending for CT’s recovery from pandemic 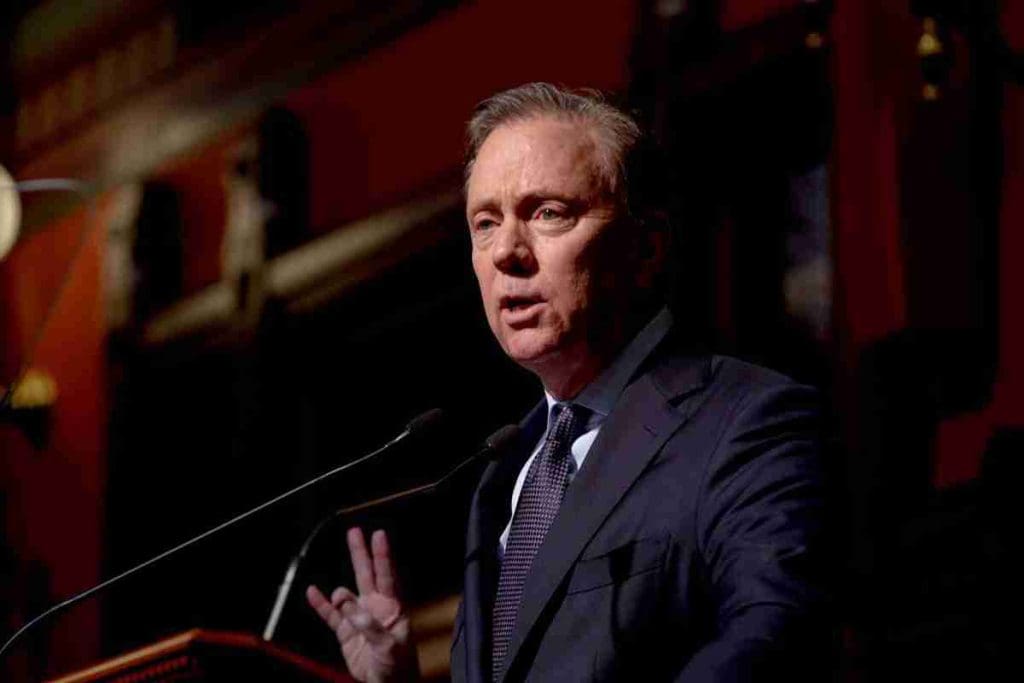 Gov. Ned Lamont delivering the 2022 state of the state address in the state Capitol in Hartford.(Yehyun Kim, CTMirror.org)

After remaining quiet on the question of hazard pay for nearly two years of the coronavirus pandemic, Lamont pitched $20 million for bonuses for front line state workers who were at risk during the pandemic.

On paper, the $24.2 billion plan Lamont offered for the next fiscal year increases General Fund spending by 2.5% over the preliminary plan for 2022-23 that he and the legislature enacted last June. And it’s 8% higher than approved spending for the current fiscal year.

But neither of those figures takes into account a larger plan to free up hundreds of millions federal pandemic relief that Lamont also would now wants spend in the coming fiscal year.

That would effectively elevate the proposed spending increase beyond $2 billion, or 10%.

But even given the proposed surplus spending, Lamont said the current budget is on pace to finish June 30 with more than $1.2 billion left over that could be used to pay down pension debt.

“Budget deficits have become record-breaking surpluses, our budget reserve fund is now overflowing, and we are able to pay down our pensions, borrow more money at less cost and return millions of dollars to middle-class families for the first time in a generation,” Lamont said Wednesday in his annual budget address.

“Just as I wouldn’t let the state be defined by a chronic fiscal crisis, I will not allow it to be defined by a COVID crisis. Despite the intense headwinds of a global pandemic, we have made significant progress with more jobs created, more families moving into our state, and more opportunity for all.”

Relief for property taxpayers and retirees

The linchpin of the governor’s latest budget involves a two-step program to ease property tax burdens, chiefly on low- and middle-income households.

“Our working families and middle-class households deserve a break, especially from Connecticut’s most regressive tax,” Lamont said. “Property taxes relentlessly come due in good times and bad, and they hit the middle-class especially hard.”

The governor would lower the current cap on municipal tax rates on passenger and commercial vehicles from 45 mills to 29 mills (one mill equals $1 in tax per $1,000 of assessed value). And while only eight of the state’s 169 cities and towns currently levy tax rates above 45 mills, the lower threshold would affect 103 communities.

To ensure municipalities with rates higher than 29 mills don’t lose funds, Lamont’s plan would appropriate an extra $160 million per year to keep them whole.

Connecticut currently offers a $200 income tax credit to middle-class households to offset property tax burdens, but it has been limited since 2018 to seniors or to families with children. The governor’s plan would restore eligibility to all households within income limits and would boost the credit to $300.

The property tax credit has been a sore point for Lamont throughout his administration.

He promised during the 2018 gubernatorial campaign to deliver relief worth about $375 million per year by the third year of his term. But he delayed fulfilling that pledge after realizing he couldn’t deliver it and keep state finances in balance without raising taxes on wealthy households. 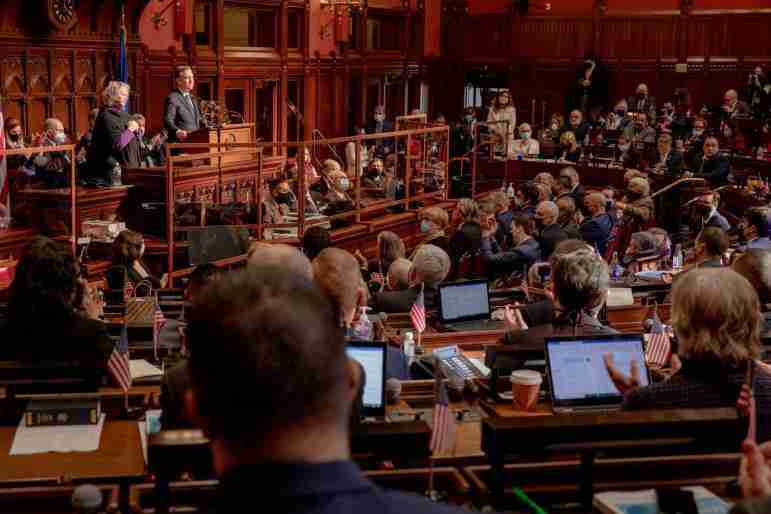 Gov. Ned Lamont delivering the state of the state address in the state Capitol in Hartford. (Yehyun Kim, CTMirror.org)

The bulk of the governor’s proposed new spending — more than $1 billion — would be focused on social services, education and health care.

That includes nearly $160 million for behavioral health initiatives and $175 million for home and community-based health care services, $90 million to improve air quality in Connecticut schools, $65 million in tuition assistance and other steps to bolster enrollment in state universities, and $26 million to support and enhance racial diversity in urban K-12 schools.

The package also includes more than $72 million in new spending for a host of criminal justice initiatives.

The governor wants to double the number of officers trained annually for municipal and state police and to assist local police departments and probation offices with pandemic-related costs.

About one-third of the extra criminal justice funding would go to the Judicial Branch to accelerate the resolution of backlogged court cases.

Dealing with the spending cap

To help pay for these investments, Lamont needs to draw upon the roughly $2.5 billion surplus Connecticut is projecting for the current fiscal year, tapping almost $515 million to support 2022-23.

But he still needs more resources, and what he wants to spend already falls just $5 million below the statutory spending cap — that’s a razor-thin fraction that represents less than 1% of General Fund spending.

There is a process to legally exceed the cap, but Lamont and most legislators are seeking reelection this year, and state officials generally are wary of directly setting aside the cap.

Lamont gets around that by actually taking $640 million in federal COVID relief funds designated to support the current fiscal year away from that plan, shrinking the surplus even further.

That doesn’t mean the state will forfeit those federal dollars. They still will be spent, just in the upcoming fiscal year, and outside of the normal budget process, and therefore outside of the spending cap.

This complex process also doesn’t mean all of these new investments will go away in 2024, when the federal pandemic aid expires.

State analysts are projecting huge revenue growth will continue over the next year. And room under the spending cap may be poised to grow — in part due to the massive inflation that rocked the U.S. economy in 2021 could help Connecticut.

The state spending cap tries to keep growth for most appropriations in line with either annual inflation or a five-year average change in household income — whichever is larger. For most of the cap’s history, the income metric has been the more advantageous.

And while the cap system allowed 3.1% growth in most appropriations this fiscal year — based on personal income — the Lamont administration projects that an inflation-based cap adjustment will permit spending to grow by more than $900 million in 2022-23 alone.