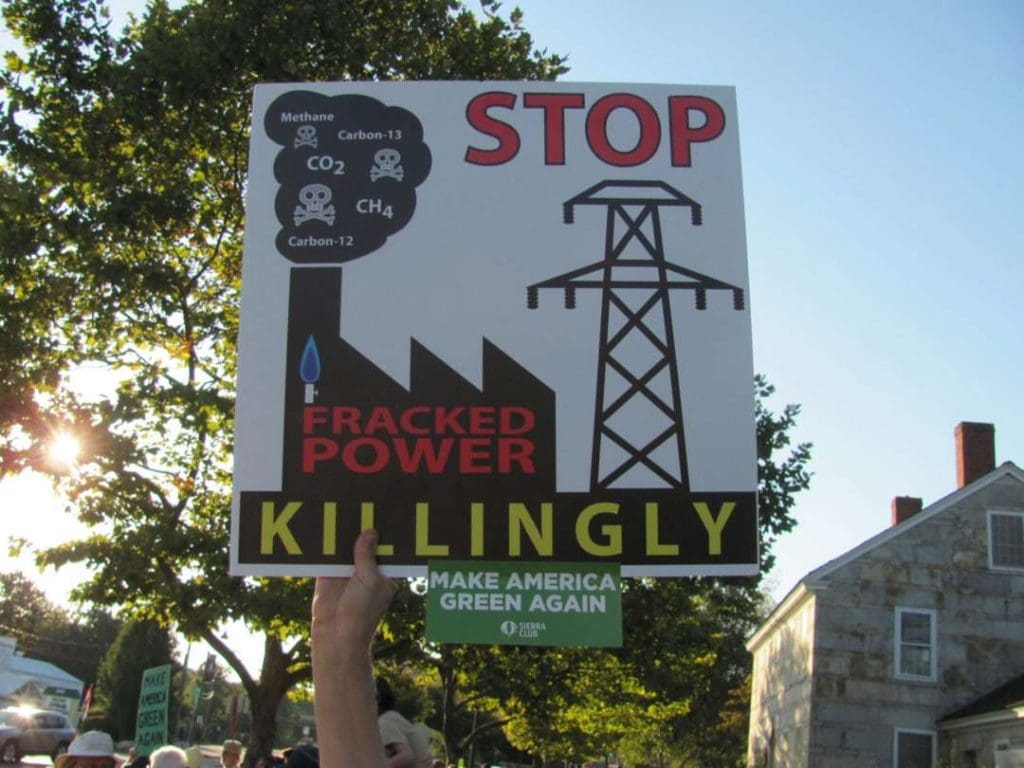 A protester holds up a sign calling for state officials to halt plans for the Killingly plant. (Courtesy of Not Another Power Plant)

Gov. Ned Lamont on Tuesday said the words out loud more straightforward than he ever has: “I don’t want to build Killingly.”

He was referring to the now five-year battle waged by environmentalists and others against building the proposed Killingly Energy Center, a 650-megawatt natural gas power plant. Those who oppose it have argued it flies in the face of Lamont’s executive order for a 100% zero-carbon electric sector by 2040, it does not support his broader commitment to fighting climate change, and it just isn’t needed.

And while he’s hinted that he’s not thrilled with the prospect of the Killingly power plant, he’s never been quite that blunt. His comments were made to more than 300 environmental advocates attending the opening sessions of the Connecticut League of Conservation Voters annual legislative priorities summit, held over Zoom this year.

The governor hinted at slowing permitting and being able to “play some games there.” He also hinted that market forces may ultimately take over.

“I’m not positive you’re going to see Killingly built at all,” he said.

Recent analysis by the Department of Energy and Environmental Protection shows electricity demand down 18 percent in the state, though many believe it will come back up as more items, such as heating, become electrified and more people purchase electric vehicles, which will need charging.

The plant has received siting council approval, after two rejections. DEEP has issued an air discharge permit and a water quality certificate for impacts to wetlands.

Still pending is a wastewater discharge permit, which is also needed, and Eversource’s water quality certification for a pipeline to bring the natural gas to the plant. “As a natural gas distribution company, we work to provide service to various potential customers — like the developer of the proposed Killingly power plant,” said Eversource spokesman Mitch Gross.

Samantha Dynowski, state director of Sierra Club Connecticut, which has led much of the opposition to the plant, said the Eversource water quality certification have to address impact on clean water and wildlife. “That permit we believe can and should be rejected,” she said.

The governor’s words were in the right place, Dynowski said: “But they really need to be followed up with action. We can’t just rely on market forces to prevent climate disaster.”

The governor’s office declined to comment on what further action he was willing to take.

DEEP Commissioner Katie Dykes, who also spoke at the summit, addressed Killingly as well, noting that she hears from stakeholders frequently. She reiterated points she has made in the past that because the grid operator, ISO-New England, has committed to buying the power from Killingly, the state is kind of stuck unless the plan does not meet permitting standards.

“I believe that we have to change the system that brought us this plant in the first place. We’re doing that by working with other states to reform the ISO-New England,” she said. “That is the place we can have the greatest and most lasting impact.”

ISO-New England spokeswoman Ellen Foley said an obligation from them doesn’t guarantee Killingly will be built. “Each New England state controls what is built in their state. The ISO has no jurisdiction over those decisions,” she said. “We are committed to harnessing the power of competition to reliably plan and operate the grid as the region transitions to clean energy.”

DEEP did, however, supply a letter of support to the siting council in June 2018, when the council finally approved Killingly.

Since then, the state has come down much harder on the issue of climate change mitigation, and the effort to reform ISO-New England has become a six-state effort, not Connecticut alone, as it was just a year ago.

Killingly’s developer, NTE Energy, declined to respond directly to the governor’s comments but maintained that it will help reduce greenhouse gas emissions by replacing old coal and oil plants.

“It will also enable the addition of more wind, solar and other renewable energy sources to the electric grid,” said Jennifer Logue, NTE’s director of communications. “When the sun stops shining or the wind stops blowing, natural gas-fired plants can ramp up quickly and provide instantaneous, reliable power.”

Interesting article on the future of a proposed fossil fuel plant, but nowhere in the piece does it state where it is going to be built. Might be a NIMBY fight, but whose backyard is expected to house it?

When brownouts become a routine event in the years ahead, while we are paying even more for electricity, remember this boneheaded position.

If Eversource and UI can spend more time and money making our communities less reliant on large power plants by offering consumers benefit from time of day discounts, net metering and energy storage with solar we will have less brown outs and less black outs.

The intense wind and rain storms like the one that caused a multi day black out in Fairfield County last summer will only get worse if we keep on approving new large natural gas plants.

If Covid taught us anything it’s that justice delayed is justice denied. The poor and front line communities suffer most from the public health consequences of climate change when the status quo prevails. 2021 is the time to double or triple the financing of energy efficiency (including subsidies for low income communities and renters) and renewable energy. Governor Lamont is right about Killingly. We must not let construction begin. It’s a half billion dollars invested in a project that will endanger Connecticut’s communities.

Let’s accelerate the just transition by not moving forward with a permitting process that doesn’t take into account the dangers that climate change presents to the whole state of CT and beyond.

No one in this conversation is telling us where are electric bills are headed…Or do the opponents of natural gas want to keep us in the dark? CT needs a wake up call and it shouldn’t be coming from those who don’t give us all the facts.

Fossil fuels is like so fossil. Did you hear they found a moon around Saturn covered in oceans of methane gas? I wonder how many dinosaurs were up there. But in any case when we choose to ignore the laws of physics we will continue to spend money on things that make us feel good but actually do more harm to the environment, like the carbon footprint of building a windmill that never pays for itself. Solar and batteries will be here one day, but right now the lowest amount of emissions we can produce comes from converting natural gas to electricity over our existing infrastructure. I feel really bad for the people who continue to buy into this nonsense that we are saving the environment, when all we are really doing is making people like Al Gore filthy rich while bureaucrats forget to tell you things like the energy used to produce corn for ethanol isn’t factored into the equation.