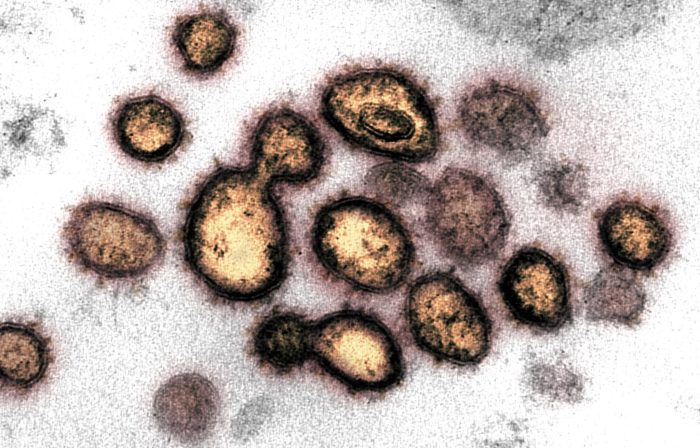 This transmission electron microscope image shows SARS-CoV-2, the virus that causes COVID-19, isolated from a patient in the U.S. Virus particles are shown emerging from the surface of cells cultured in the lab. The spikes on the outer edge of the virus particles give coronaviruses their name, crown-like. (Courtesy of National Institute of Allergy and Infectious Diseases {NIAID}.)

Lamont’s update included news of a new executive order allowing restaurants and bars to sell alcohol as takeout, along with meals, and the suspension of non-critical court operations.

“While the Connecticut Department of Public Health (DPH) State Laboratory in Rocky Hill has been publicly releasing data on the number of tests conducted at its facility that have returned negative results for the virus, private laboratories have not been providing the state with similar statistics for tests conducted at each of their facilities,” the release said, providing the available statistics:

The Lamont administration signed an order requiring all private laboratories in the state to begin releasing information to DPH effective immediately so that it can be publicly reported and collected with the data on negative tests results from the State Laboratory, the State press release said. “That data is anticipated to be received soon and will be publicly shared.”

The Connecticut Department of Transportation (ConnDOT) is “making several adjustments to its CTtransit and CTfastrak bus operations in order to ensure the safety of passengers and drivers,” the press release said.

“Effective immediately, passengers will board from the rear door with the exception of passengers in wheelchairs and others who require the bus to kneel. Additionally, approximately 100 CTtransit buses have been equipped with transparent, impermeable barriers providing a partition between drivers and passengers. Buses are operating on normal weekday and weekend schedules. CTtransit service updates can be found at www.cttransit.com. For more information on the bus adjustments, click here,” it said.

“Service plazas on I-95, I-395, and the Merritt and Wilbur Cross Parkways, as well as rest areas on I-91 and I-84 remain open for highway travelers. Take-out food is being served but visitors are being directed to purchase their items and remove them from the facilities to minimize any congregation of people. Rest area and service plaza facilities are continually being cleaned and sanitized. Highway maintenance projects are continuing as planned.”

“I especially want to express my gratitude to all of the transit workers in Connecticut who are maintaining critical operations in order to ensure that the people of our state can safely get to where they need to be during this difficult time, including healthcare professionals and first responders who need to get to their jobs,”  Lamont is quoted as saying. “I want each of them to know that we are grateful for every effort they are making to ensure our transportation system can continue operating and people can get to where they need to go, particularly in the event of an emergency.”

“Amid continuing volatility in the financial markets and an economy quickly slowing due to the COVID-19 outbreak, Banking Commissioner Jorge Perez is reassuring Connecticut residents that their money is safe in banks and credit unions,” the release said.

“While it is natural to worry about the safety of your money in uncertain times, the money Connecticut residents have in financial institutions will continue to be insured up to $250,000,” Perez said in the release. “More so then ever before, customers and members can have the peace of mind knowing their deposits are secured though the Federal Deposit Insurance Corporation for banks and the National Credit Union Association for credit unions.”