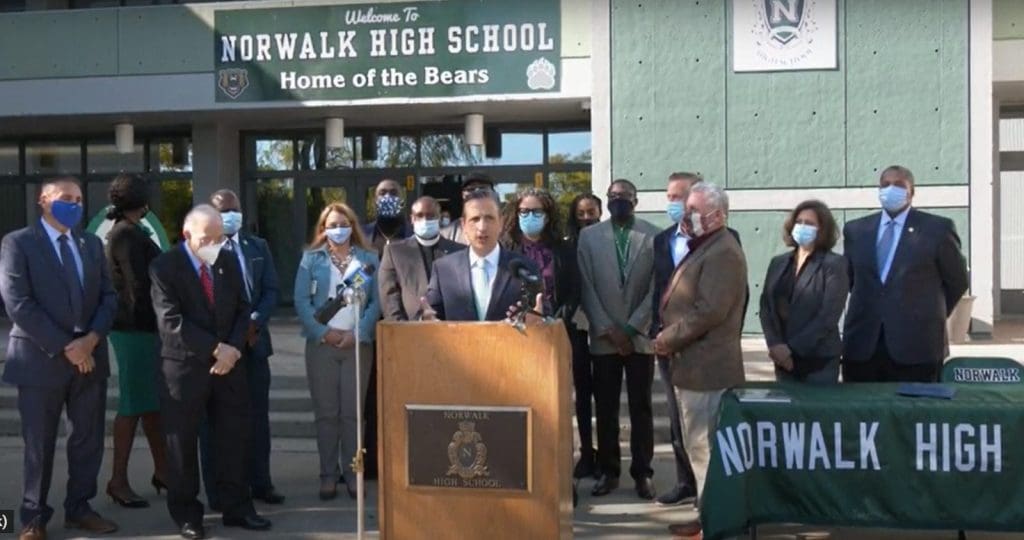 Lamont ceremonially signed the school construction bill passed last week by the legislature, authorizing 80 percent State reimbursement for building costs. The bill represents a commitment of about $150 million in State money for the school, and references were made to the controversy the unusual move inspired.

The bill signing at the school came 10 months to the day after State Sen. Bob Duff (D-25) surprised the public by announcing the idea, which hadn’t been on the Board of Education’s radar screen.

Instead, the BoE had been repairing the 50-year-old building, but costs kept escalating. The work was “just really putting good money after bad,” Duff said Friday. “And finally, we started have the conversation about that we could not really responsibly renovate this school anymore, we had to start thinking about building a new school.”

Though some BoE members decried the surprise nature of the plan, then-Norwalk Superintendent of Schools Steven Adamowski acknowledged that he’d been in the talks from the get-go.

The bill met resistance on the House floor Sept. 30 when Republican proposed an amendment to remove the Norwalk High School project. State Rep. Tom O’Dea (R-125) said the state could not afford the project because it’s taking up so much of the bonding.

State Rep. Chris Perone (D-137) rose to oppose the amendment, agreeing that the State’s fiscal future is uncertain. If you’re looking at costs, you also have to consider “the cost of inaction in this case,” Perone said. “I think it’s problematic because you’re talking about a facility that is 50 years old, it’s basically reached the end of its shelf life.”

There are increasing maintenance costs and operation costs, and the $11 million then-slated for repairs “does not buy us much time,” Perone said. “We’re going to have to have this conversation about whether to rebuild this school, re do this school, going forward.”

State Rep. Lucy Dathan (D-142) also defended the project, noting as Perone did, that the P-Tech (Pathways in Technology Early College High School) program is a great success and will be expanded under the new school construction plan.

Not only does P-Tech provide job training and reduce college expenses for the students, “it’s also keeping these kids in a Connecticut., which is helping our local economy,” Dathan said.

“If we do not do this program, IBM is going to be looking in other places to expand this program, it has been that successful for them that they would like to do that,” Dathan said. “So there is a lot of evidence that we need to keep these projects in our state to increase the number of young people, talented young people, in our state to grow our economy. It really is an investment in our future.”

The amendment failed, 86-51. The next day, the bill sailed through the Senate to unanimous confirmation.

Former Finance Committee Chairman Bryan Meek called it a “very sad day for Norwalk,” alleging that the State Bond Commission will never authorize the money because “the state is over it’s constitutional debt spending limit by a long shot.”

Dathan on Oct. 2 responded, “The state passed school construction back earlier this year which included money for the high school.  The Governor also is in charge of the bond commission.  The agenda of the special session is closely worked with Governor and this high school was part of the agenda.”

“This particular bill, $448 million, involves investments all over the state,” Senate President Pro Tempore Martin Looney (D-11) said during Friday’s ceremony. “It’s important for the building trades. It’s important for stimulating the economy, in every community in the state, like Norwalk with his major project, the town of Hamden, that I represent, getting new money for an expanded middle school so that the sixth grade can be added there. Similar stories are being told in every single one of the 169 communities in Connecticut.”

“I’m most excited about the P-Tech program,” Dathan said. “I come out of technology and I know how important it is to get these kids up and ready for the next generation of jobs. We are going to be doing that here in Norwalk.”

“I love the whole concept behind the school,” he said, calling P-Tech “amazing” because it “gives you an on ramp right from high school to a place you way may want to be for the rest of your life, right here in the state of Connecticut.”

And, “I love what you’re doing on the digital media and the arts media,” he said.

“This is a wonderful, remarkable day, a day that nine months ago or 10 months ago, we were waiting for,” Mayor Harry Rilling said, thanking Duff, Looney and the legislative delegation. “It doesn’t happen in a vacuum. It happens because good people are dedicated to making progress. And this is, absolutely, this is progress.”

And what happens to all of the other school construction projects in Norwalk that are so badly needed? What happens to Cranbury School? Jefferson School? And we still have 1500+ South Norwalk students without a neighborhood school!

Some observations:
1) If it all comes together it’s a win for Norwalk. Although the money is prioritized for the wrong needs, it none the less is money.
2) Great campaign ad for those who showed up. Guessing there was a Progressive caucus meeting soon after. Glad to see certain legislators take a bow for something they did virtually nothing to push.
3) The guy pictured on the left – It looks like Martin Looney. Is he making a spitting gesture, I’m not quite sure. If so, and I have no reason to doubt that, he should immediately apologize and resign
4) Were there any Republicans in that picture or were they not allowed?
5) Wind Power — It’s a little breezy this morning. It made me think of the Windfarms being built to replace natural gas power in 2-3 years. Has anyone asked their legislators how much more their bills will be once those are operational? How about an additional 20%, which should keep us in the lead for highest electric bills in Continental U.S. I’ve been asking local legislators for confirmation but they don’t seem to want to give me a figure. Maybe Nancy will have more success.
6) In conclusion, we will be spending $240 million on a school we really don’t need to build. Our ELL kids will continue to perform poorly because of lack of funding. Martin Looney needs to stand up straight so as to not confuse anyone as to his intent. Our electric bills will be going up another 20%, but none of our legislators will admit it. (Just blame big bad Eversource when it happens) It’s all ok because we will have a trophy on County Street.
That being said Notre Dame Football is back today and we look forward to a win against Florida State. #GoIrish

I don’t remember any taxpaying constituents wanting this school. Time to read up on Ellie before voting.

…..Interesting in the picture how our NPS dignitaries are 2 feet apart if that, but won’t allow parents to attend their child’s sporting events and stand 6 feet apart….a bit Hypocritical wouldn’t say NPS… ???

Can anybody indicate what the net cost to Norwalk taxpayers will be for a new HS?

How much will norwalks share ( including additional capacity- teachers, etc) impact the Mill Rate.

NonPartisan, Norwalk approved $50 million in bond funding before getting a true estimate on costs. That was in April, when they needed to approve bond funding as part of the process.
The state’s estimate is $189 million. 80 percent of that is $37.8 million.

Skyler, the bill passed by the legislature includes $33.4 for Jefferson. Cranbury is in process.

Thank you for the additional information

Two issues
1- Norwalk spend more per classroom seat than NYC. How can that be?
2- I have been unable to find a complete additional annual – cost And corresponding mill rate impact – post construction and fully occupied.

What’s Going on in The Norwalk Public Schools?

Monday October 13, 2020 is Columbus Day a Federal Holiday, and yet the teachers are being made to come in and work all day and into the late afternoon despite the students being off. Teachers are spending many extra hours after school each day and into the late hours of the evening posting assignments for the students doing remote learning at home. Teachers are exhausted and at a breaking point, and are not getting any help or support from Central Office or the Union about the conditions. any teachers are contemplating leaving or resining due to the working conditions under COVID-19.

Non Partisan, it’s said that the cost is inflated because it needs to be built in stages. They build a segment and then demolish part of the existing building. Then they build another segment…

I don’t believe they have those secondary statistics worked out yet.

Is is Non Partisan, or NoN-Partisan?

@Allan, the Norwalk democrats (and national as well) have been the most hypocritical bunch of “do as I say, not what do” “leaders” we have ever witnessed. Shame on them.

Remember rilling at George t and john kydes bar in may? Less than 6 feet apart and no mask. Plus they were out and about while us fools were made to “quarantine”…

Yup, but hey, we’re a democratic city, what do we expect from these people?