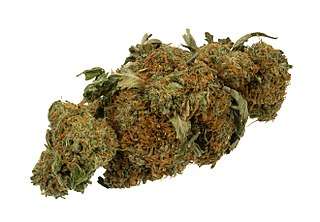 A gram of marijuana. (Wikimedia)

Gov. Ned Lamont is positioning lawmakers for a robust debate this year on legalizing and taxing the sale of marijuana for recreational use.

The administration has begun seeking agency feedback on a draft bill that would tax dry cannabis flowers at $1.25 per gram, trimmed marijuana plants at 50 cents per gram; and wet cannabis at 28 cents per gram. In addition to applying the standard sales tax of 6.35% to marijuana transactions, a 3% surcharge would be added and the revenue from this shared with municipalities.

The bill would also automatically erase convictions for possession of less than four ounces of cannabis that occurred prior to Oct. 1, 2015, and allow those convicted of this offense after that date to petition the state for erasure.

Lamont signaled during his Jan. 6 State of the State address that he was planning to pursue legalized marijuana as a source of new revenue for the state.

“I am working with our neighboring states and look forward to working with our tribal partners on a path forward to modernize gaming in our state, as well as the legislature on legalization of marijuana,” Lamont said. “Sports betting, internet gaming, and legalized marijuana are happening all around us. Let’s not surrender these opportunities to out-of-state markets or even worse, underground markets.”

Max Reiss, the governor’s communications director, added Tuesday that “The administration is continuing to work toward that goal.”

But the draft bill does not guarantee Lamont will incorporate this in the two-year budget due to lawmakers next month, nor is it likely to represent the governor’s full plan. Lamont proposed a marijuana commercialization bill last year, but still opted to include no revenue from it in his budget. And draft bills routinely exclude provisions the administration intends to craft later in collaboration with legislative committee.

Though lawmakers have discussed marijuana commercialization frequently at the committee level over the past four years, Rep. Jonathan Steinberg, D-Westport, co-chairman of the Public Health Committee, said Tuesday that “I think it has extremely stronger prospects than it had in recent years.”

If the legislation is to pass, though, Steinberg said his panel and other health advocates must place as large a role in shaping the legislation as will others concerned with fiscal and criminal justice matters.

Sen. Douglas McCrory, D-Hartford, co-chair of the Education Committee, has been one of the legislature’s strongest voices for de-criminalization of cannabis, including expunging the records of those convicted previously.

McCrory also said there would be strong opposition to taxing cannabis sales — and giving Connecticut government a new stream of revenue — if those dollars aren’t used to help the state’s poor urban centers, where many of the marijuana-related convictions occurred.

“Frosty the Snowman would have a better chance of passing summer school in hell than any piece of legislation in Connecticut if it doesn’t deal with equity, economics and the communities that have been targeted and devastated by this fake war on drugs,” McCrory said.

Sen. John Fonfara, another Hartford Democrat, said marijuana commercialization is a “nonstarter” unless it’s a tool to reverse systemic racism.

“It’s about building wealth in the [disadvantaged] community,” said Fonfara, who co-chairs the tax-writing Finance, Revenue and Bonding Committee. “If you’re going to tackle racism, it’s based in giving people economic opportunity and economic power. It’s an imperative for me.”

But the top Republican in the House, Minority Leader Vincent Candelora of North Branford, said it’s a mistake to assume marijuana commercialization will pass this year.

Candelora, a longtime opponent of cannabis legalization, said many lawmakers initially are drawn by the lure of more revenue for the state, but then pause when they study the details more closely.

Lamont’s proposal doesn’t offer any revenue estimate. And when the legislature’s nonpartisan Office of Fiscal Analysis last projected receipts from taxing marijuana, in 2017, it’s annual revenue estimate of $115 million was based on models from other states.

Pro-commercialization advocates have suggested Connecticut’s annual take could be $170 million or more.

“There are other ways for government to make money,” Candelora said, adding that the debate can’t ignore the potential impact on Connecticut’s children. “The science is really against it, when you look at the impact on youth, on developing brains, on drug addiction.”

It’s a sad day when New Jersey is more progressive than Connecticut. This is taking too long and for Mr Candelora to use children as an excuse is very disingenuous. McDonald’s is doing more to harm children than marijuana ever could.

Lamont and the legislature should have legalized recreational marijuana use and its sale at least two years ago. With all of the budget problems this state faces we could have really used that new source of revenue considering every state around us is already or in the process of doing it.

I agree with Mr. Sheikh in his use of McDonalds as an example of the greater harm we have no problem in letting kids ingest. Legalization of use and state controlled sales as opposed to underground sales will make it harder for children to access. They will be able to access it through adults illegally selling it to them just as they are able to now access beer and other alcoholic beverages illegally from adults. Children obtaining drugs illegally is going to be a problem as it always has been whether marijuana is legalized for recreational use by adults and sold legally under the state’s auspices.