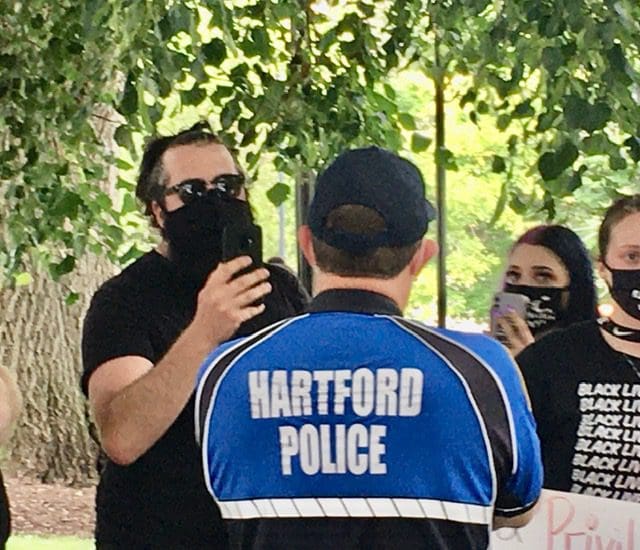 Police and protesters outside the Capitol before passage of the police reform bill. (Mark Pazniokas, CTMirror.org)

HARTFORD, Conn. — Gov. Ned Lamont’s ceremonial signing of the police accountability bill Friday opened with flattery of the police who fought its passage and contributed to turning the measure into a sharply partisan issue in an election year for lawmakers.

“We so value our men and woman in blue, and we’re so grateful for the work they do every day to protect us and their families,” said Lt. Gov. Susan Bysiewicz, who opened the ceremony. “We know that the vast majority of our police officers put the needs of their communities first.”

Ceremonial bill signings are celebrations, but this one was relatively muted. Proponents spent nearly as much time emphasizing what the bill doesn’t do and what it’s passage doesn’t say as they did in assuring victims of police misconduct that change is coming.

“Our men and women in law enforcement are selfless. They are caring, they are compassionate, and they are proud of the badge they wear. This measure is not an anti-police measure,” Bysiewicz said.

Lamont and Rep. Steve Stafstrom, D-Bridgeport, co-chair of the Judiciary Committee, name-checked the ranking Republican members of the committee, Rep. Rosa Rebimbas of Naugatuck and Sen. John Kissel of Enfield, as partners in every step of producing the new law — save the final one.

The Republicans voted against the final product.

“I love the way you started with a big table, and I thought that was really important,” Lamont said. “I want to thank Rep. Rebimbas, as well, and Sen. Kissel, who were at that table. I think at the end of the day, we all understand how important it was and what a big step this is.”

To the police, the governor said, “You’re my heroes.” 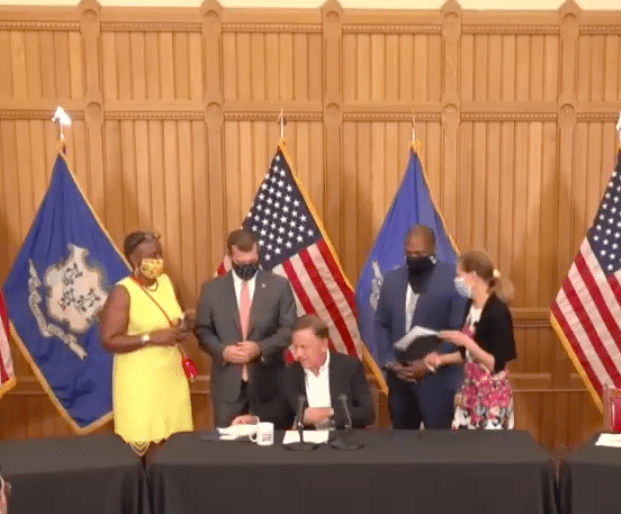 Lamont noted that the police killing of George Floyd in Minneapolis, the catalyst for the reform legislation adopted in Connecticut, generated both an outpouring of support across the U.S. for Black Lives Matter – and violent clashes between police and protesters.

“That didn’t happen in Connecticut. That didn’t happen, because the protesters were there representing the very best in our values, and the police were there with respect. That’s what makes for a great police force and community policing,” Lamont said. “I think we led by example as a state, and for that I am eternally grateful.”

Lamont’s chief of staff, general counsel and policy director met Thursday with unions representing the State Police and officers in Hartford, New Haven and Waterbury in an effort to assuage concerns and listen to the case for changes that could come before key provisions of the new law take effect next year.

“Look, it’s important to continue to build bridges. There is a lot of misinformation about this bill and virtually everything that happens in this state,” Lamont said. The governor said his staff meant to show both confidence in the legislation and to give police confidence that “we’ve got their back.”

No police union leadership was represented at the bill signing. Andrew Matthews, the executive director of the Connecticut State Police Union, called the meeting productive.

O’Leary, the former leader of the Connecticut Conference of Municipalities, said the final version of the legislation largely addressed municipal concerns about increased liability for police misconduct.

Joe DeLong, the CCM’s executive director, said the first version was “incredibly problematic” in that it seemed to end government immunity against claims of willful misconduct by individual officers — something that liability insurance does not cover.

He called the final version “workable.”

Municipalities remain concerned about a section that establishes factors to consider when evaluating whether a law enforcement officer’s use of deadly physical force was objectively reasonable.

“We have some real concerns of unintended consequences about that, which I hope can be further studied and modified,” DeLong said. “Our biggest concern is there are some gray areas. That section encourages hesitation in a life or death situation. We believe training should kick in, not legislative hesitation.”

The bill creates the office of an inspector general to investigate complaints of police misconduct, requires police and correctional officers to intervene when witnessing brutality, mandates body and dash cameras, bans chokeholds in most circumstances and clarifies that deadly force can be used only when police exhaust all reasonable alternatives.

It also revamps and empowers the Police Officers Training and Standards Council, giving it the authority to decertify a police officer — revoking a necessary credential for employment. POST also would play a large role in shaping training for every police agency in Connecticut, including the State Police, and help set policies on crowd control and the use of force.

A police accountability task force will review the bill, and the POST Council will work on implementation.

One change suggested by CCM didn’t make the cut: barring police supervisors and officers from being in the same bargaining unit, which can complicate the disciplining of officers.

Winfield said the bill was made possible by the demand for action throughout Connecticut, not just in Black neighborhoods.

“Connecticut has heard the cry for change,” Stafstrom said.

As the famous Mayor Ed Koch once said: ” The voters have spoken, now they must be punished” — A poorly written bill. The good news is we can probably speed around town not worrying about being stopped.

That’s not pee running down your back, it’s just raining.

Review the NY CCRB list and results. That is exactly what happens in every state with police issues…nothing.
They run the protection rackets and there is little we can do about it when it does not work well. One mans hero is another mans…
Typically,for the most part,Connecticut does not have major issue but feels a need to legislate and be part of the “conversation”, avoiding all sorts of compelling issues that face the state.
A total waste of time in a less than abbreviated legislative session.

“You’re my hero”
Isn’t that kind of what Brutus said just as he stabbed Julius Caesar in the back?

I read the hour today- Drive by shootings in Darien and Norwalk.

I’m sure the new legislation will make us all safer.

I would love to know which young man or woman would want to go into law enforcement after our pandering politicians passed this odiferous pile of excrement. Connecticut is a State that is declining on virtually every key performance measure imaginable, with more problems than I have room to list here…and this is the big priority?! No wonder people are moving out in droves.

You’re my hero now screw you.